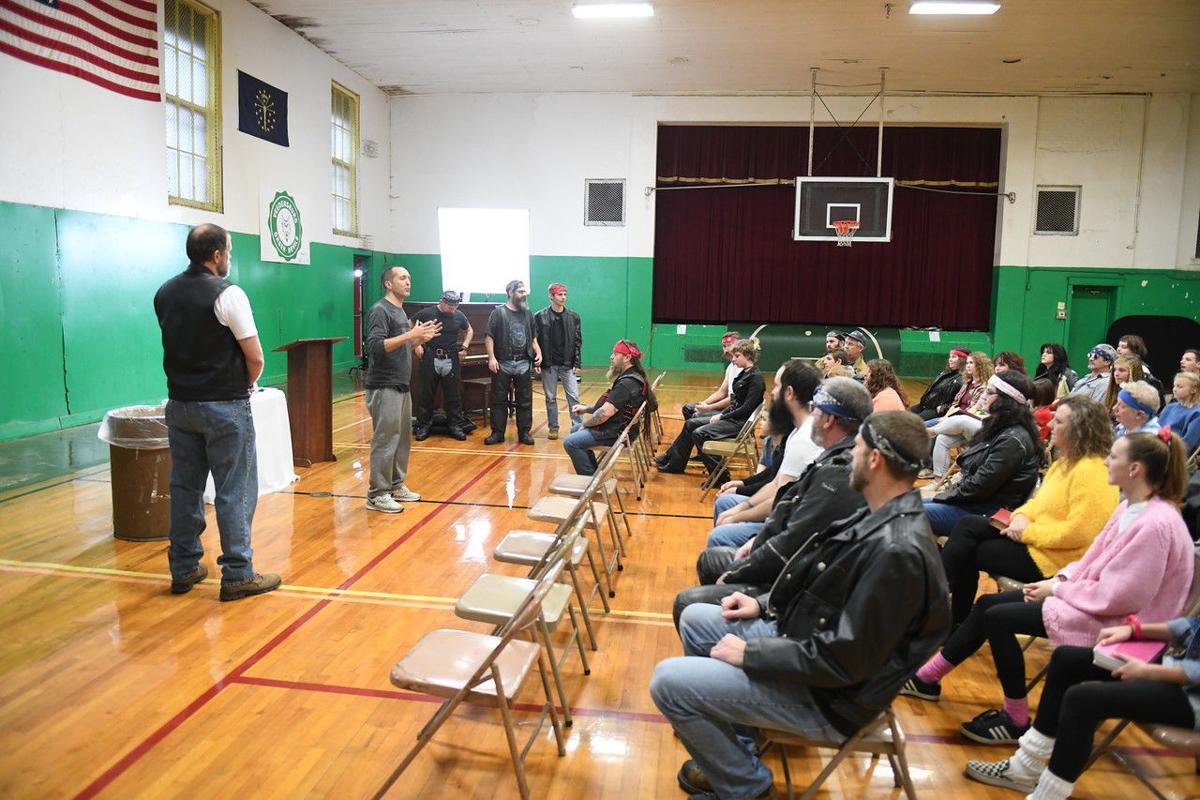 The writer and director of OverRide, Jeremy Vegter, gives instructions during the filming of OverRide. 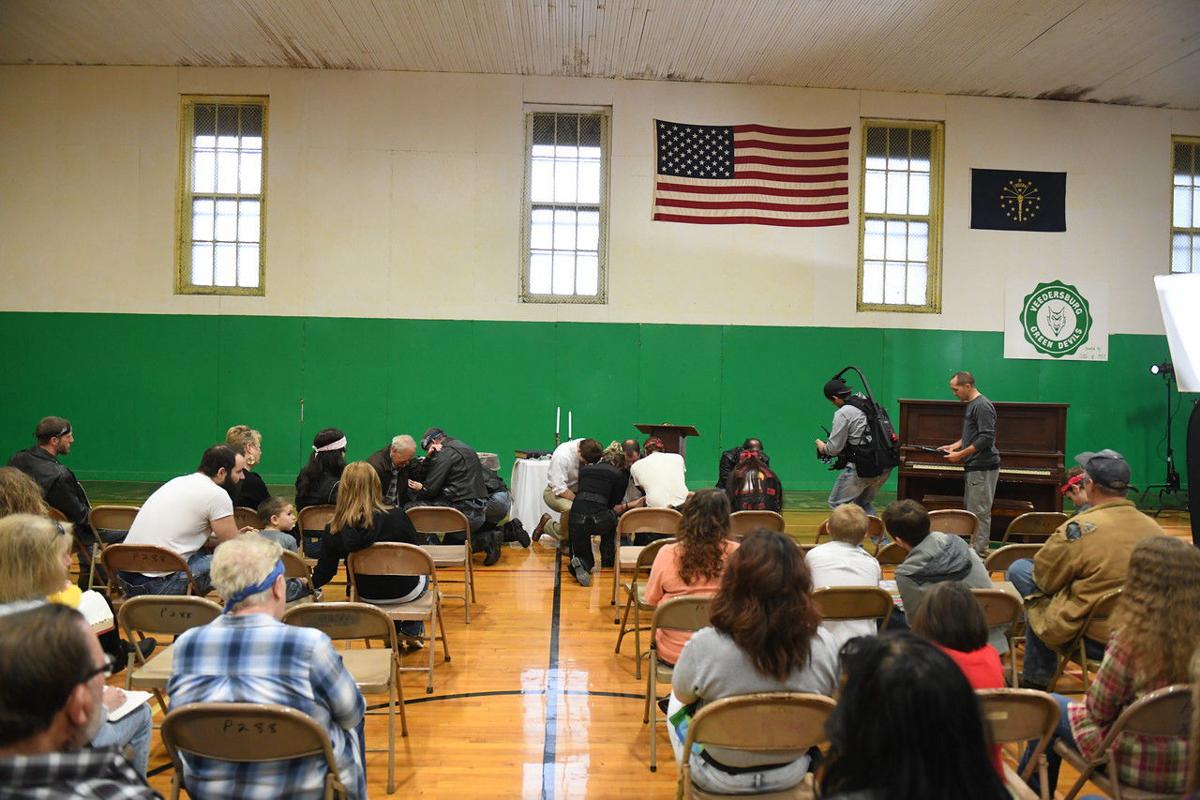 A flashback scene from the film OverRide, a film produced by the Lafayette-area church Faith Church, is shot at the old Veedersburg High School gym. 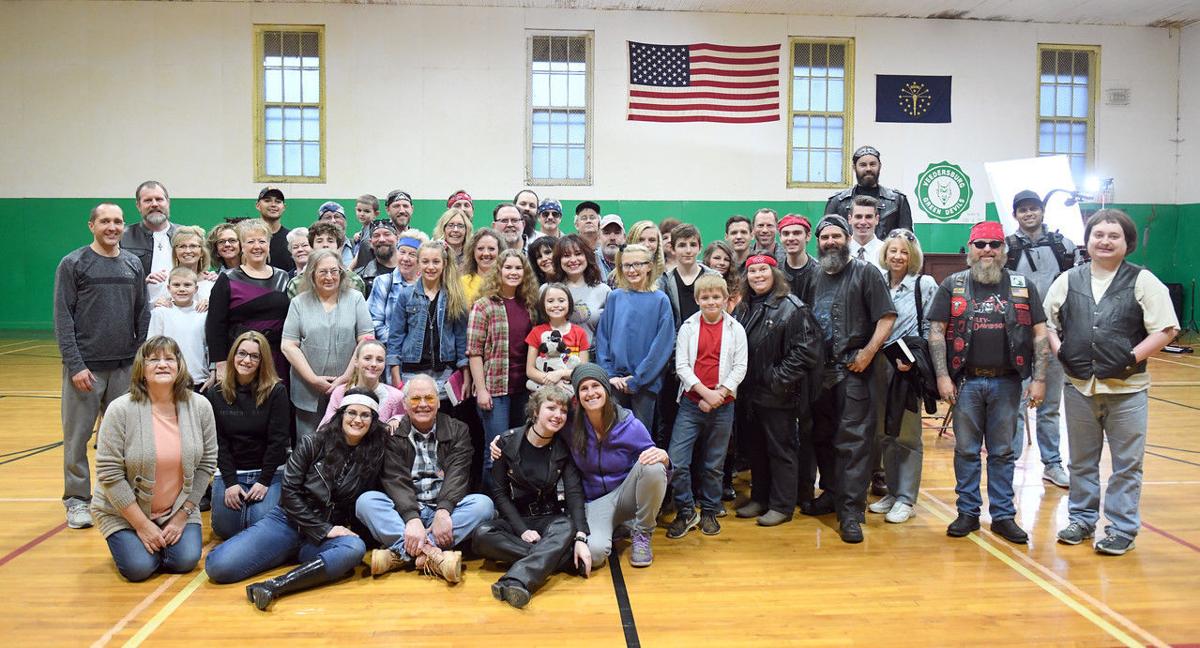 Cast and crew of the Faith Church film OverRide take a group photo in the old Veedersburg High School, home of the Green Devils, gym

The writer and director of OverRide, Jeremy Vegter, gives instructions during the filming of OverRide.

A flashback scene from the film OverRide, a film produced by the Lafayette-area church Faith Church, is shot at the old Veedersburg High School gym.

Cast and crew of the Faith Church film OverRide take a group photo in the old Veedersburg High School, home of the Green Devils, gym

The old Veedersburg High School gym got some special use recently.

A film crew from Faith Church in the Lafayette area used it as a location to film scenes from OverRide, a faith-based film telling the story of Fred and Lauri Bucci, and their son Danny, and the struggles in coping with the drug addiction.

Jeremy Vegter, director of electronic communications at the church, is the director and writer of the film. “This is a documentary that chronicles the Bucci family’s battle with drug addiction, showing, in the end, how those who are going through trials and heartache can find hope, victory, and peace in Jesus Christ.”

He said a friend of his, Mark Shaw, the former director of Vision Hope and author of The Heart of Addiction, pointed him in the direction of the Bucci family and the story they could tell — a story of using their faith to be victorious in Fred’s battle with drug addiction when he was a young man, great heartache in their son Danny’s battle with drug addiction, and great grace in dealing with the results of their son’s choices.

“During the summer of 2017, I and a small crew went up to Cleveland, Ohio, to interview Fred and Lauri Bucci along with several of their family and friends. I spent 2017-18 weaving those interviews into a script that tells their story in what is, I hope, a compelling and interesting fashion. In other words, OverRide has been ‘written’ using only the content of the interviews. In the summer of 2018 we went back to Cleveland to interview a couple of members of the police force who figured prominently in this story. I spent the remainder of 2018 through the summer of 2019 revising the script and, while there is still some revision and editing that needs to be done, it was far enough along that we could begin shooting some of the flashback scenes,” Vegter said.

He said they’ve shot just nine of the 44 planned flashback scenes, and they’ve shot in Lafayette and Crawfordsville, so far, with many other locations planned. Shooting in the Green Devils’ gym allowed some Veedersburg residents to be extras in the film.

The Veedersburg Hub Civic Center was used to represent where Fred and Lauri helped out at the parachurch ministry called The Gospel House, which met in various locations like an old school gym.

The use of film ministry is a rather newer concept.

“Film ministry is not really much of a stretch for a church that is focused on community outreach,” he said. “Film ministry is simply a way to exponentially spread the Good News of Jesus Christ by sharing visual stories.”

Faith Church is working its ability to communicate its values and vision to its constituents, surrounding community and the world at large would be greatly enhanced with a dedicated in-house film production company.

“So that’s why we’re producing this first documentary – to give evidence that it’s possible, to show that it can be done well, and to prove that its potential for changing lives is well worth a long-term investment in terms of both money and resources. Also, everybody who is participating in this venture, and I’ve got 145 people in my contacts list that are in some way shape or form are tied to this documentary, is doing it on a volunteer basis. So if this initial project succeeds, it will be due to the Lord’s blessing and the hard work and sacrificial gift of time by many dedicated volunteers.”

Getting this off the ground is part of the church’s five-year strategic plan, one of the church’s community engagement initiatives, and it’s one of Vegter’s personal initiatives as the director of electronic communications. Once this film is done, he said, it’ll be easier to show the worth of film ministry.

Faith Church is located in Lafayette and West Lafayette, spread out over three campuses with a membership of 1,900, he explained.

“We are Baptistic in doctrine. We are a bit untraditional, however, in the fact that we don’t have three church buildings: only our original campus has a traditional church building/auditorium – our other two church campuses are housed in two of our three community centers. The reason for that is we believe that it is more important to have facilities utilized for community-based outreach ministry seven days a week instead of a church building that only gets used one day a week and sits dormant the other six.”