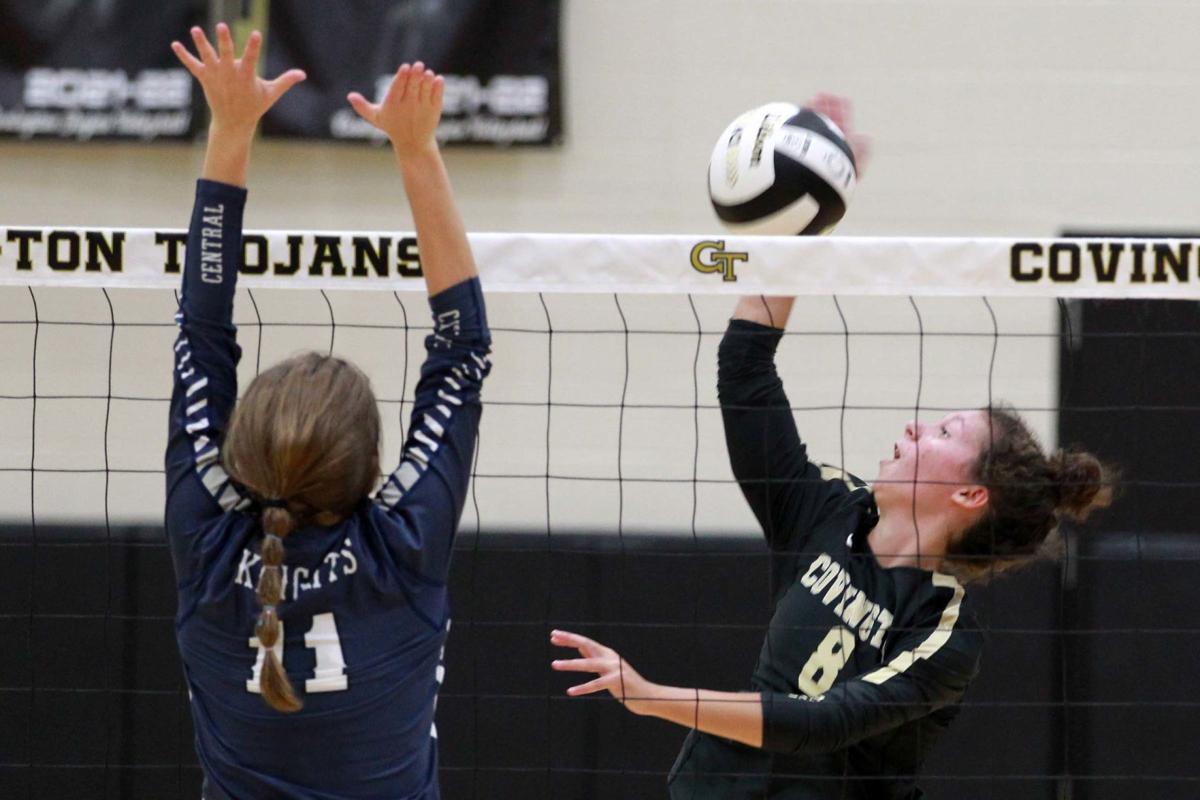 Alex Sutherlin of Covington hitting down the line to avoid a block from a Lafayette Central Catholic defender. 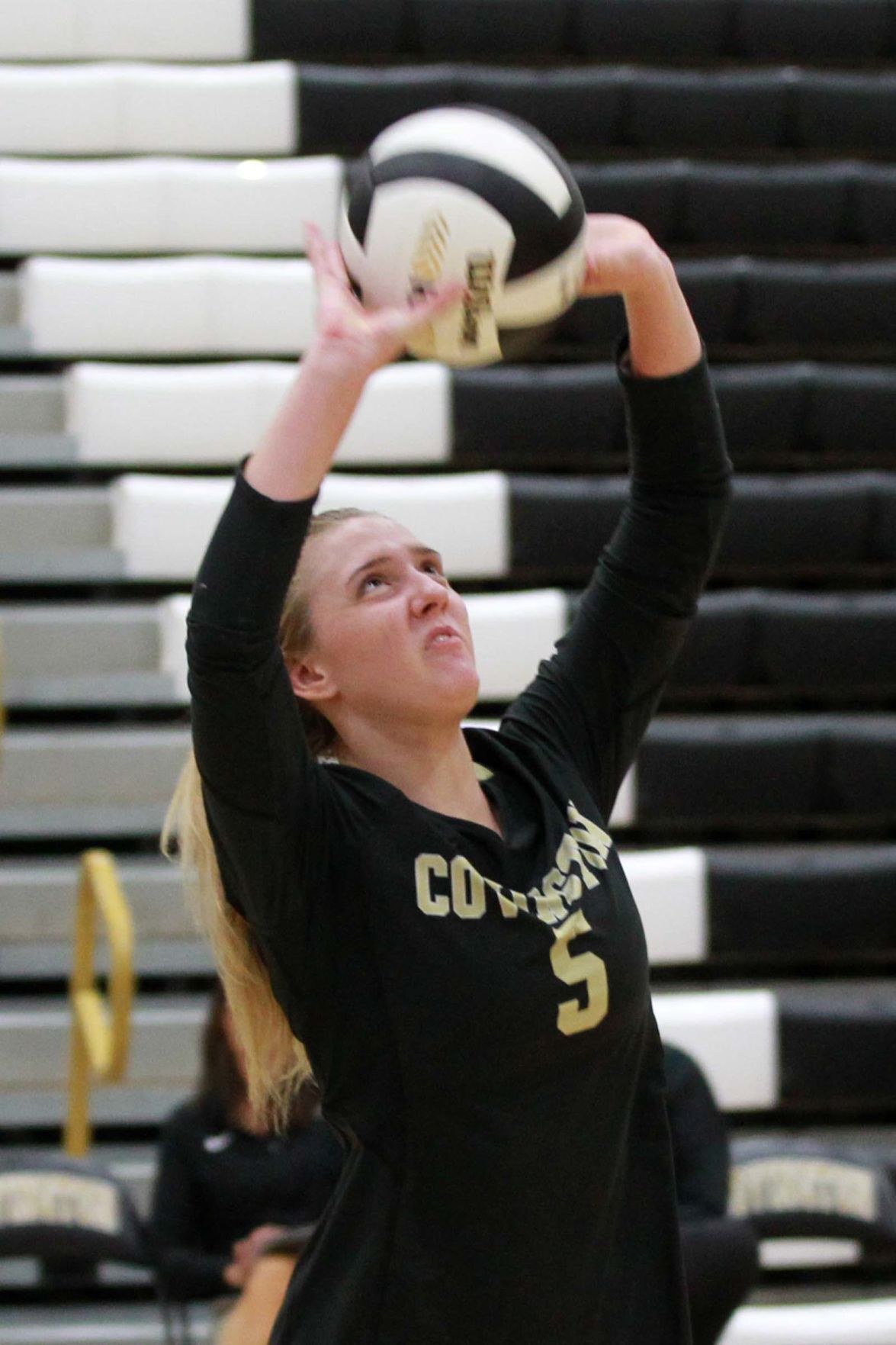 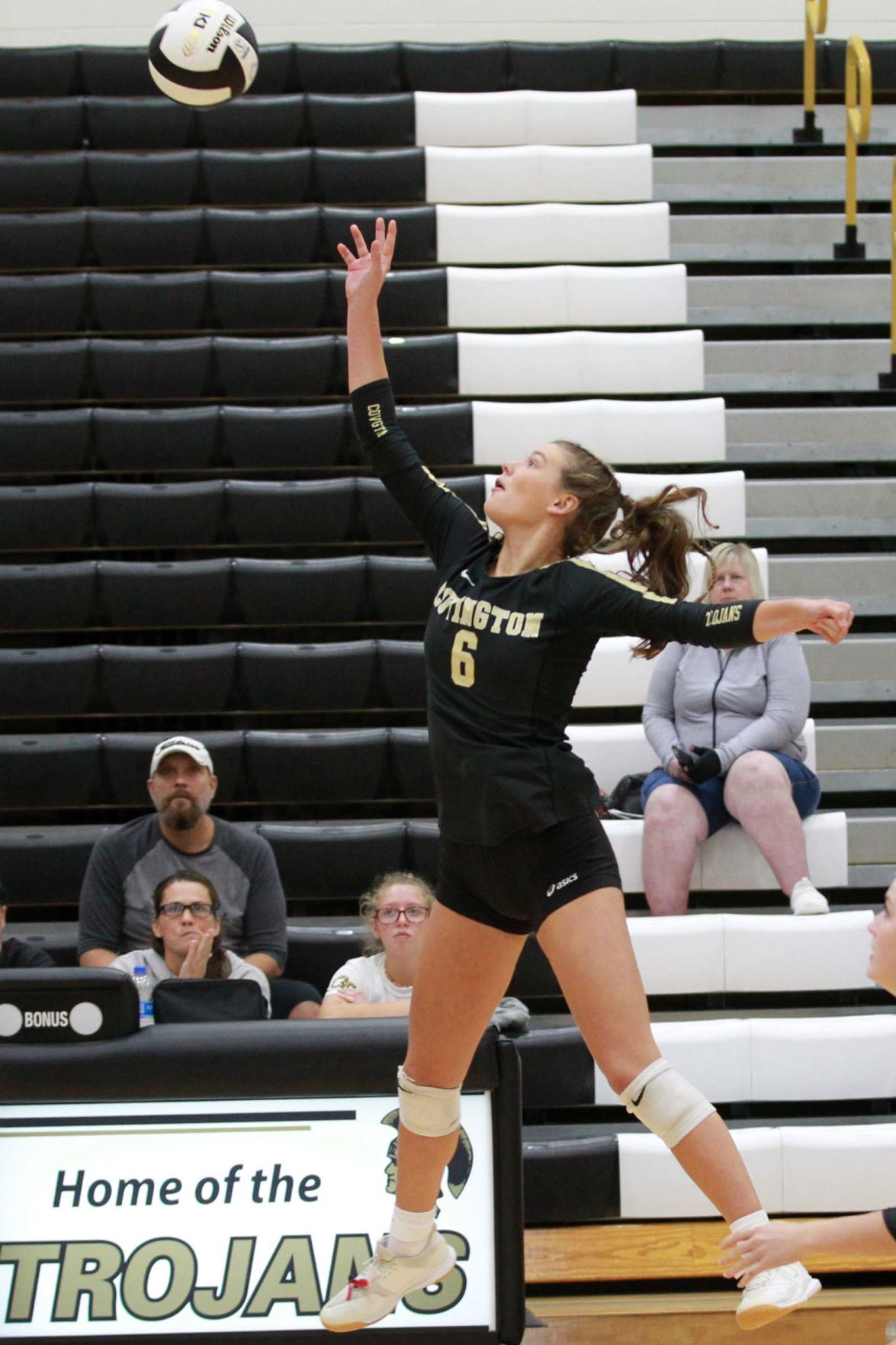 Holly Linville of Covington dinking at the net in game one against Lafayette Central Catholic. 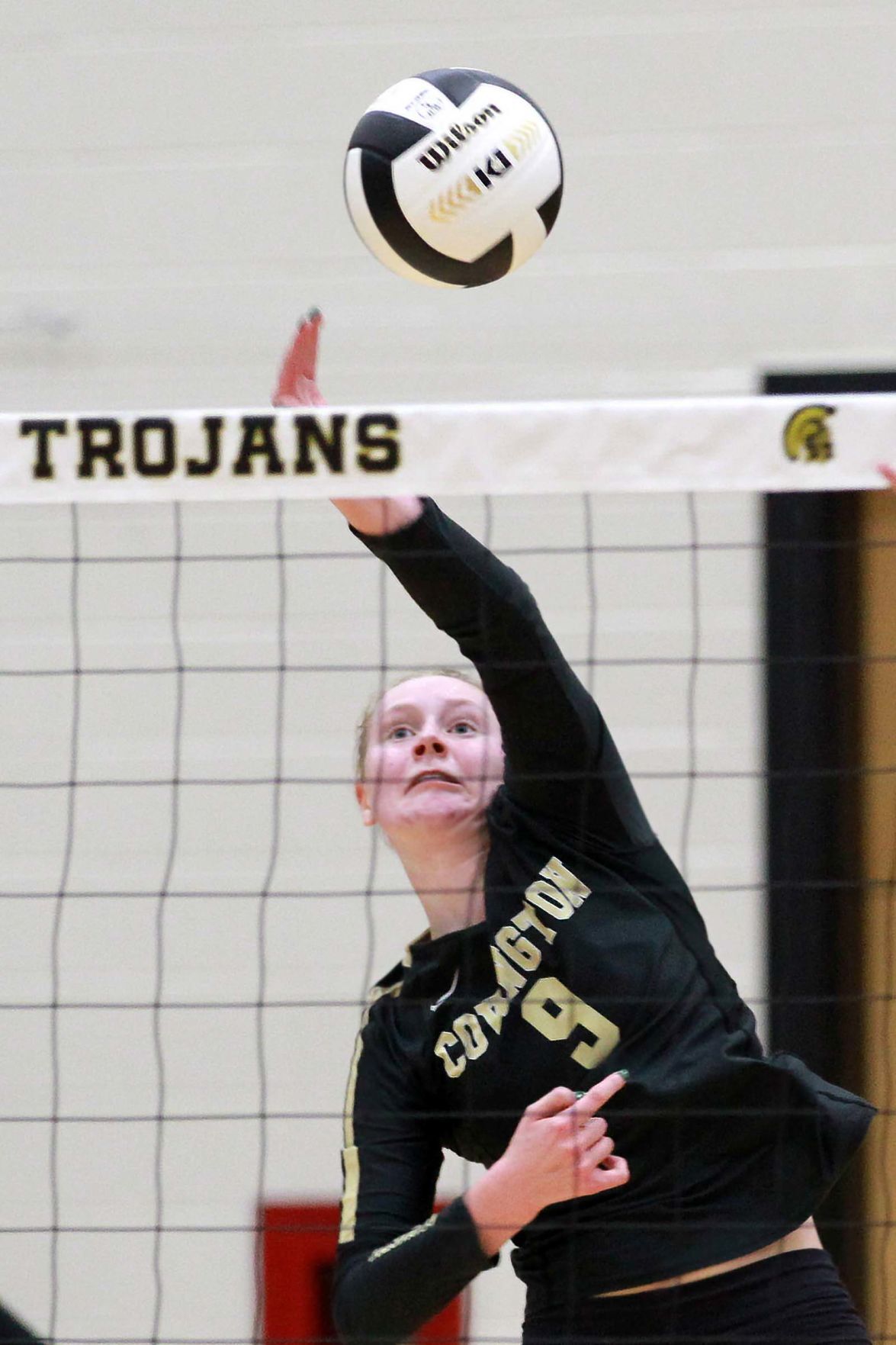 Amber Cruser of Covington changing the apparent direction of her hit in game three against Lafayette Central Catholic. 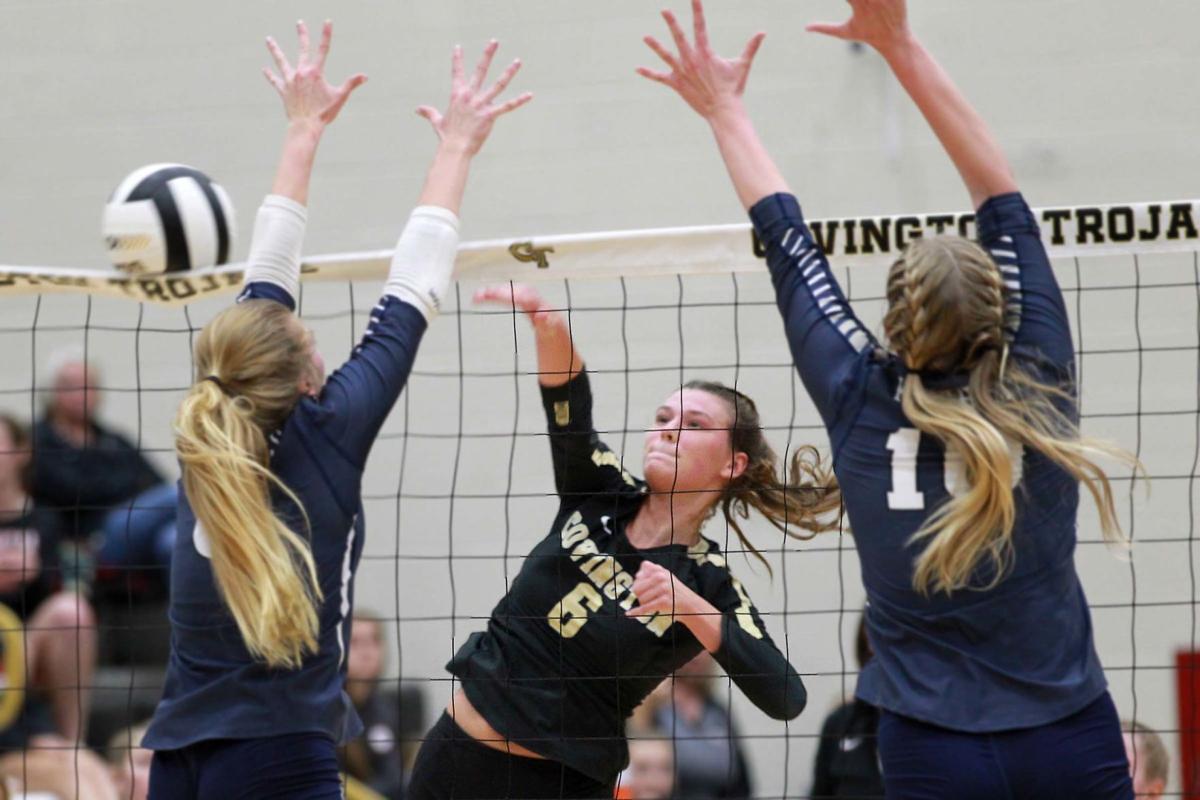 Holly Linville of Covington hitting past a pair of Lafayette Central Catholic blockers. 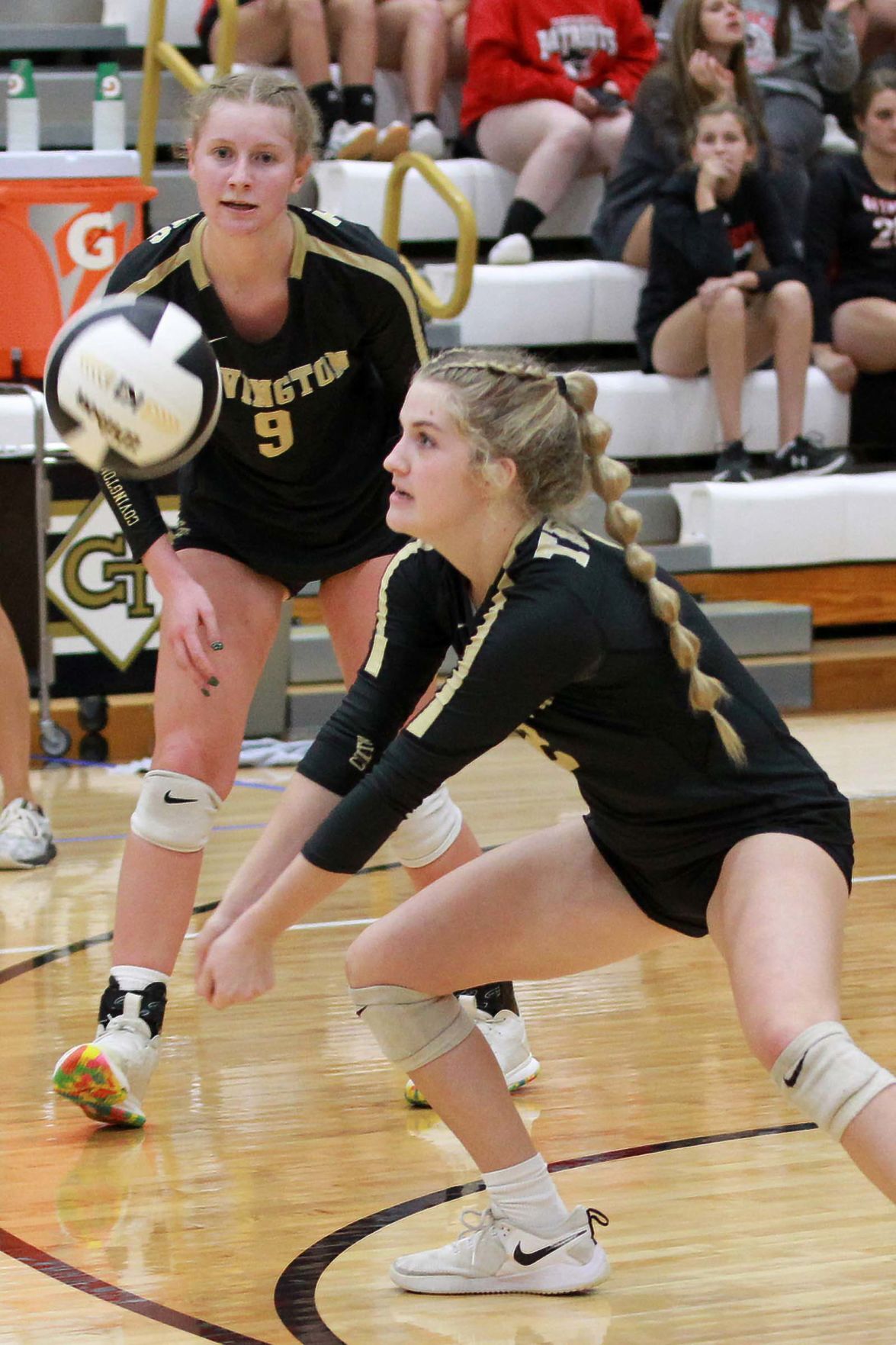 Emma Taylor of Covington digging out a serve from Lafayette Central Catholic as Amber Cruser watches.

Alex Sutherlin of Covington hitting down the line to avoid a block from a Lafayette Central Catholic defender.

Holly Linville of Covington dinking at the net in game one against Lafayette Central Catholic.

Amber Cruser of Covington changing the apparent direction of her hit in game three against Lafayette Central Catholic.

Holly Linville of Covington hitting past a pair of Lafayette Central Catholic blockers.

Emma Taylor of Covington digging out a serve from Lafayette Central Catholic as Amber Cruser watches.

In no other sport than volleyball is a match between to equal teams so often decided by momentum swings and such was the case in each of the five games when state #10-ranked Covington hosted #2 Lafayette Central Catholic on Thursday in the 1A Sectional 54 opener.

Side outs dominated play in game one between the schools as neither could earn more than two points in a row until the visiting Knights ran off three to tie the game at 19-all.

Maybe that tough loss motivated the Trojans, but they grabbed the first point of game two and proceeded to score five more to force a Central Catholic timeout.

That break helped the Knights win the serve, but Covington only saw their lead diminish after a couple of service errors and, after another timeout by the visitors at 19-16, the Trojans went on to score six of the final nine points for a 25-19 win.

Game three swung back and forth much as had the first one, but with each team making a three- or four-point spurt only to see the other counter them with an equally long run of their own.

Central Catholic made a three-point dash, gave up the serve for a point and then ran off another four in a row to turn a 11-10 lead into one of 18-12 and the Trojans could get no closer than four before falling 25-19.

The fourth game was much like the second as Covington took an early 8-5 lead, stretched it across a Knight’s timeout to 11-6 and then 16-8 forcing a second break.

The Trojan momentum continued on past that timeout and they went on to win 25-16 to set up the decisive fifth game.

It, like the other odd numbered games, saw the teams trading the lead with Covington going up 3-1, the Knights cutting the margin to one at 4-3 and then going ahead at 6-5.

At that point, there was a monumental swing in momentum as the ensuing point was awarded to Covington, giving them the serve tied at 6-all, but the coach of the Knights stopped play to appeal the point, claiming that one of the officials had ruled the previous point in favor of the his team.

The head official huddled with his two lines people and eventually decided to give the ball back to Central Catholic to replay the serve at the previous 6-5 score.

After the match, the tower official explained that while he hated replays, both lines people were sure their call was right so, because he could not tell from his vantage point, he had no choice but to order a do-over.

With that change of ruling came a change in the emotions of the Trojans who went from being jubilant what they thought was a great hit to sudden desolation after the point was taken away.

They never recovered and, despite Covington coach Jen Sutherlin calling timeouts at 9-7 and 11-7, Central Catholic kept the momentum and went on to win game five by a 15-8 score to capture the match.

Sutherlin said her team had done all she had hoped for, playing the Knights better than they had in a match in a Lafayette tournament earlier in the season.

“The team played great tonight,” she stated. “They executed what we had worked on in practice for the different situations we expected to see. They reacted to changes just the way he had hoped.”

She sighed and then said, “In the end, they earned a stop and we turned it over and that was the difference.”

She was pleased with the development of the team throughout the season, saying that after September they had worked on mental toughness.

“Back then we would have been in trouble early in a match like tonight,” Sutherlin explained, “but we showed the toughness to fight through things tonight. We just didn’t get a point here or there that we needed.”

Losing six seniors in Emma Taylor, Paige Messmore, Karsyn Engle, Holly Linville, Amber Cruser and Haley Harmeson will be a big loss and make next season a rebuilding year, but the ever-upbeat Sutherlin said she is looking forward to it.

“We had some kids who will be returning who were good enough to play, but didn’t get much time on the floor because they are only three-position rather than six-position players,” she said. “Next year they will need to learn how to stay on the floor the whole game, but they have potential so we should be okay.”

In an odd statistical note, Covington was not the only team to lose their opener, as Benton Central and all the Wabash River Conference teams lost their opening matches in their various 3A, 2A and 1A sectionals.