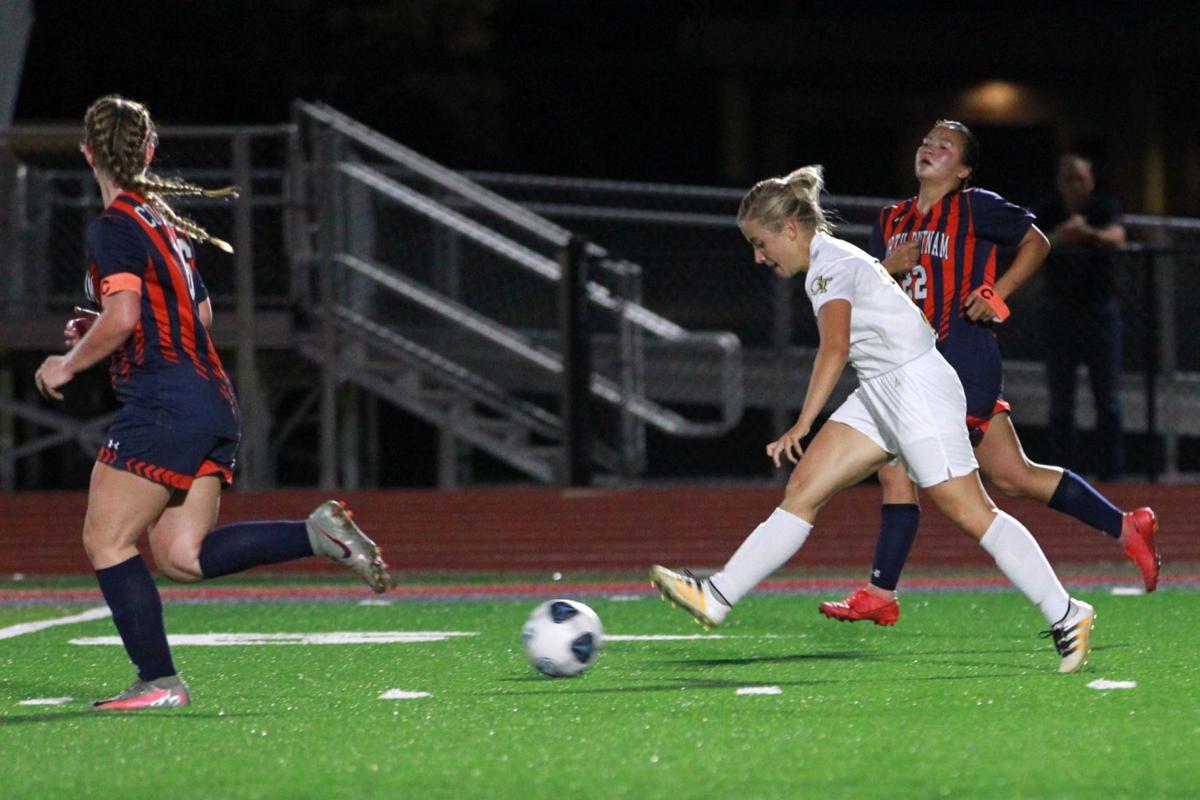 Sierra Krepton of Covington clearing ball up the field against North Putnam. 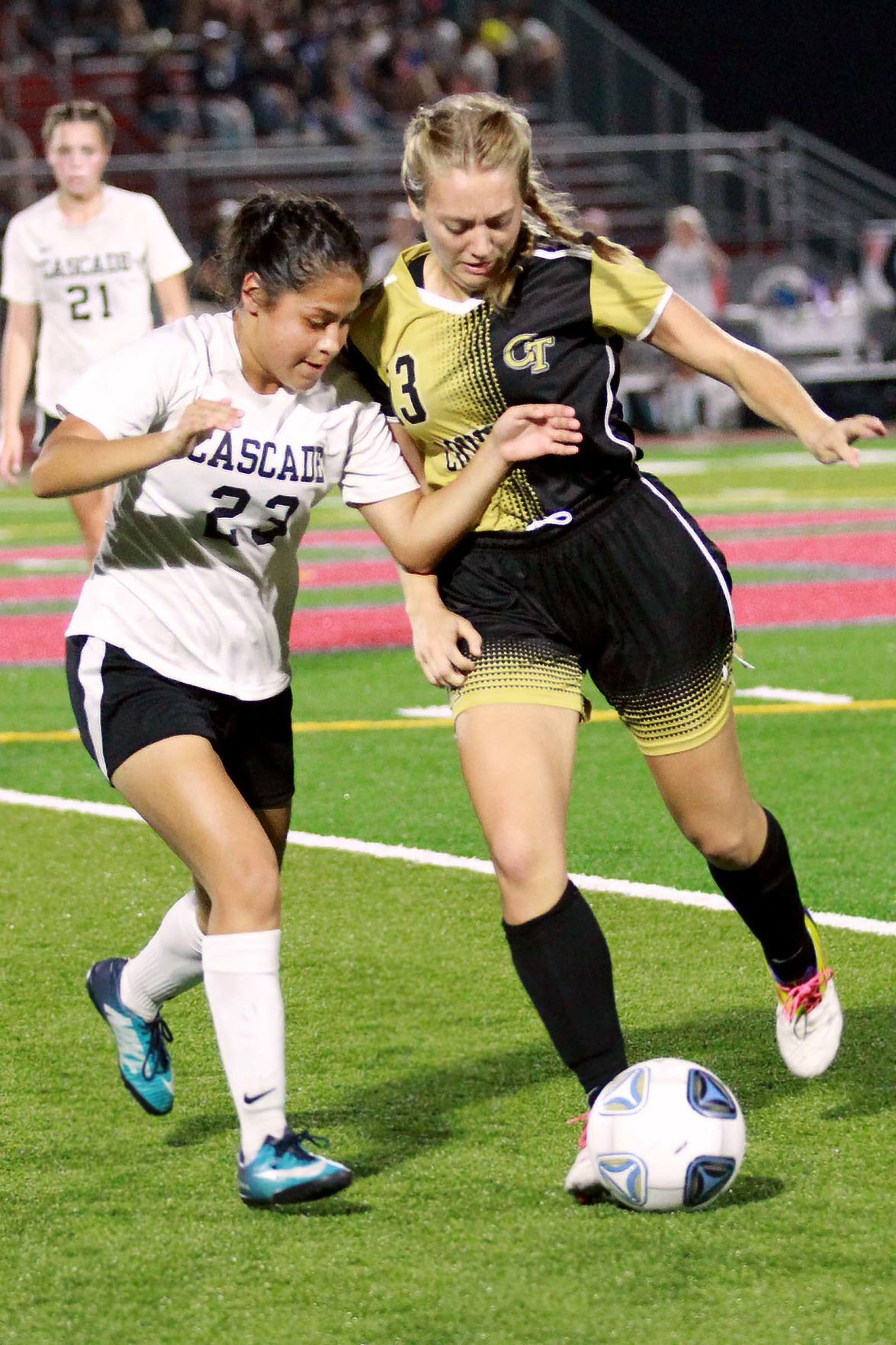 Bernadette Goeppner of Covington battles Emily Nava of Cascade for control of the ball. 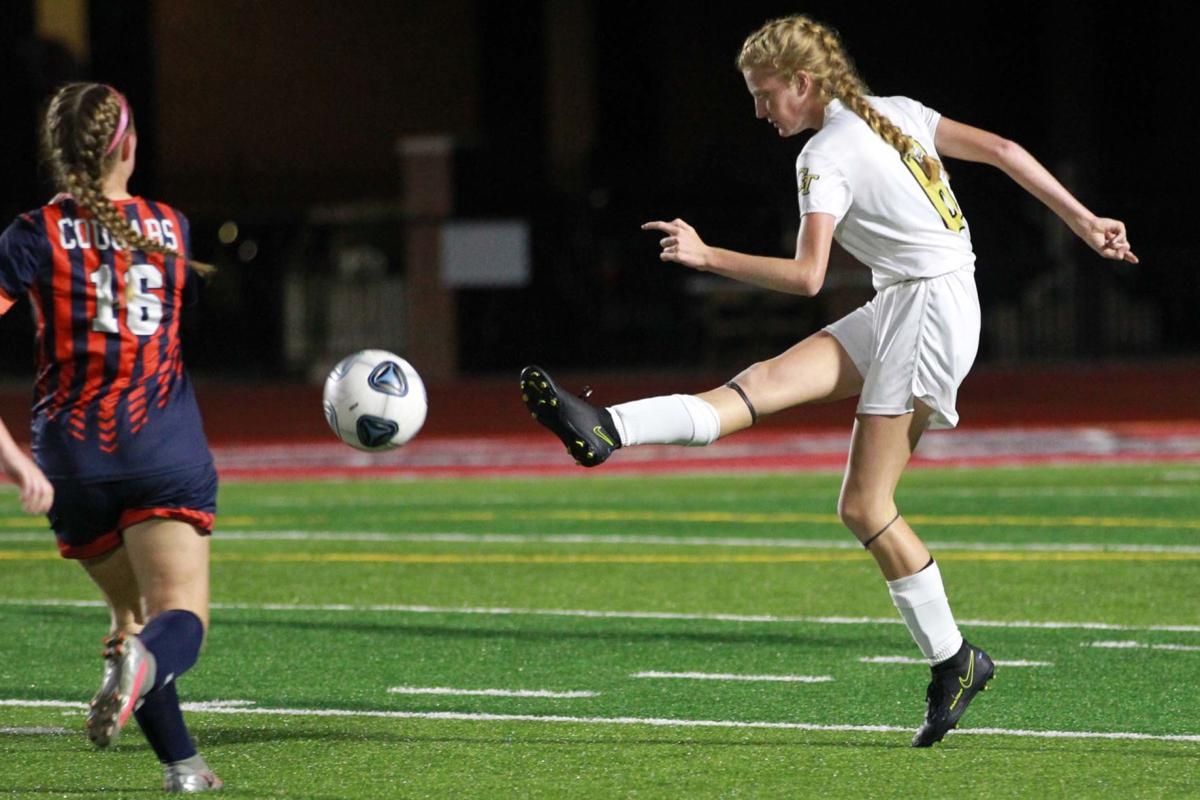 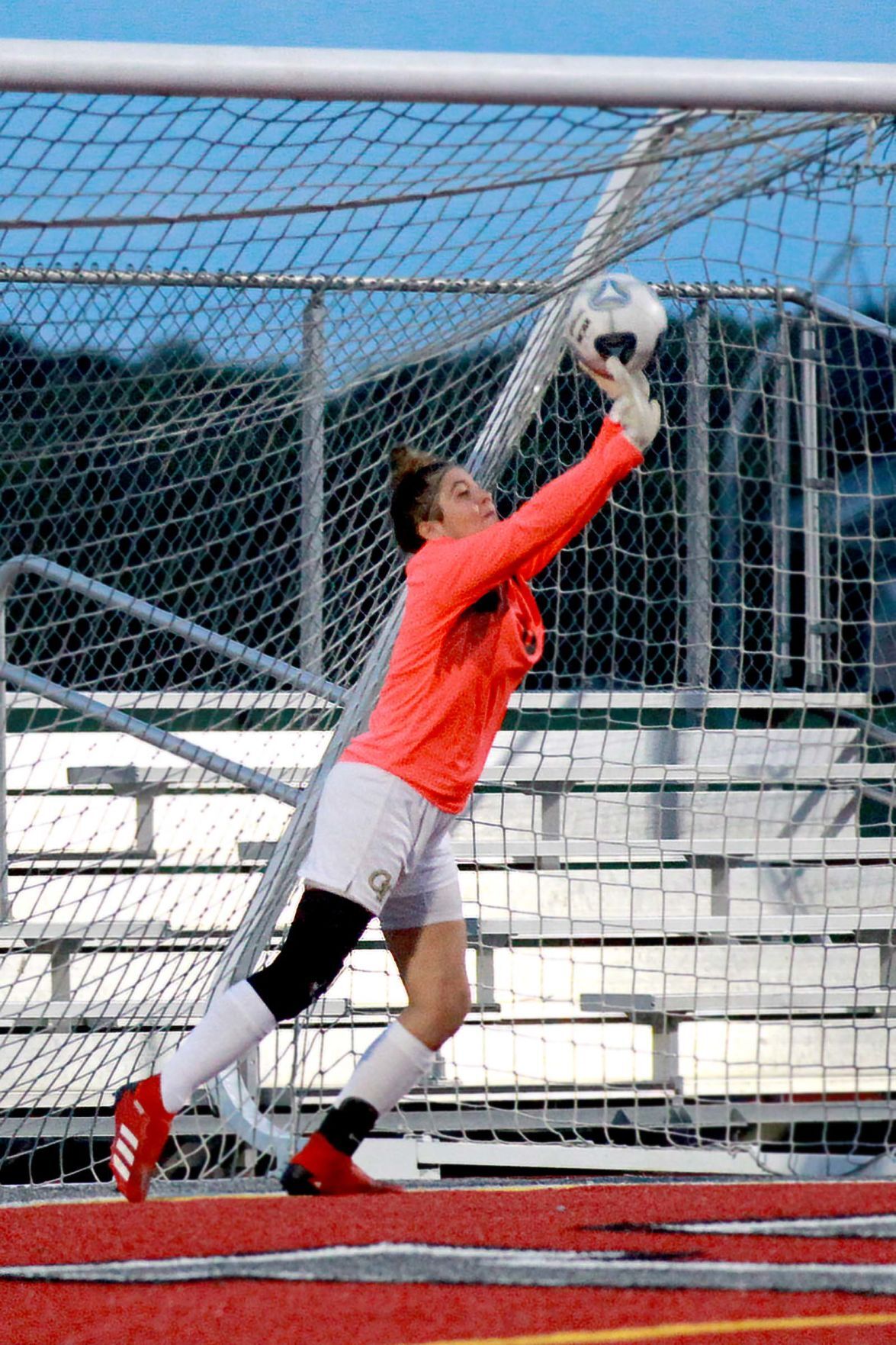 Shiann Haymaker of Covington made this save on a penalty kick by North Putnam to preserve a 1-0 Trojan lead which turned out to be the final score. 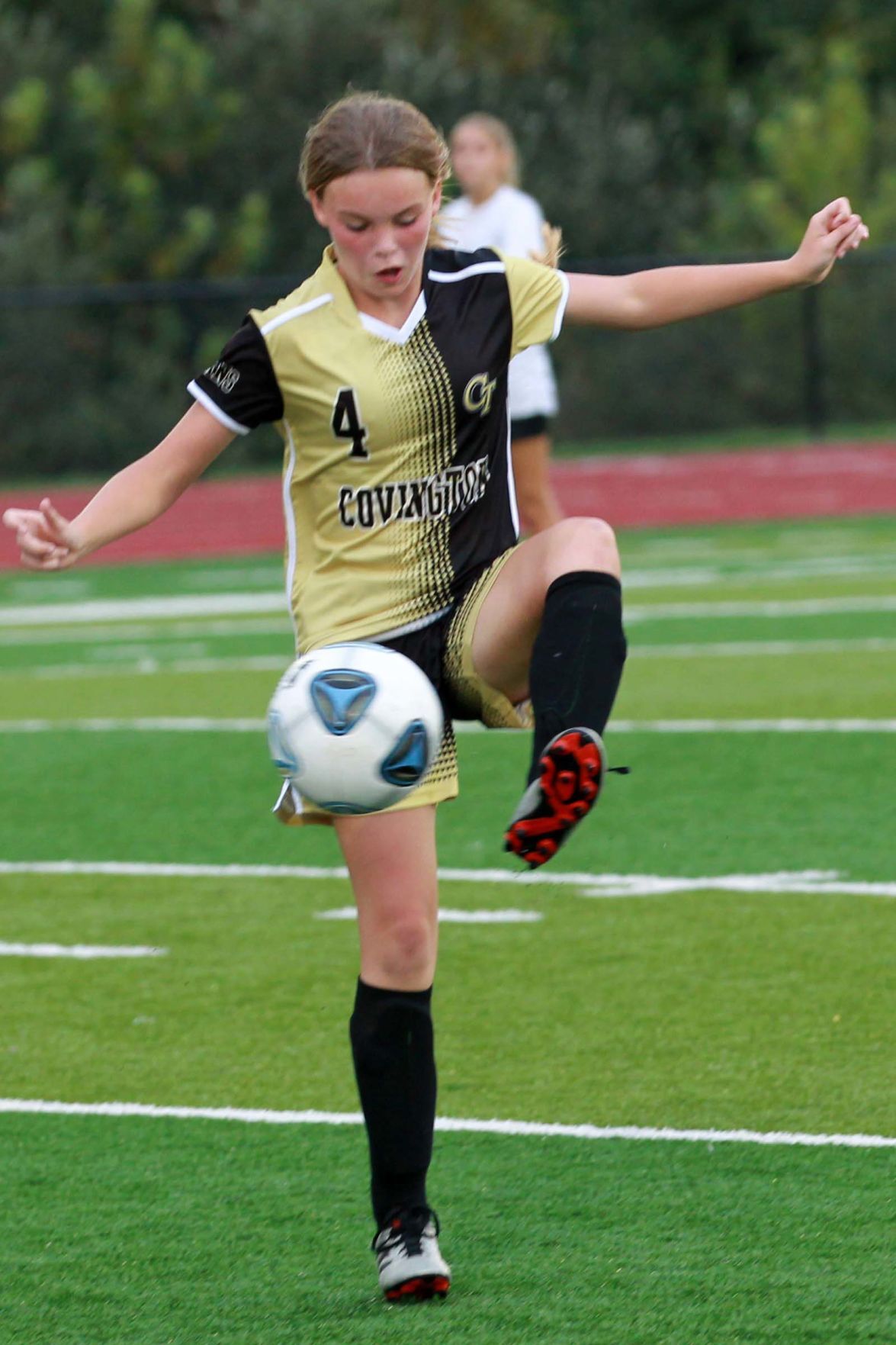 Sierra Krepton of Covington clearing ball up the field against North Putnam.

Bernadette Goeppner of Covington battles Emily Nava of Cascade for control of the ball.

Shiann Haymaker of Covington made this save on a penalty kick by North Putnam to preserve a 1-0 Trojan lead which turned out to be the final score.

Benton Central and Covington saw their boys’ and girls’ soccer seasons come to an end in sectional play in the past week.

The Bison boys fell in their opening game of the 2A Sectional 18 at West Lafayette when Rensselaer Central defeated them by a 2-1 score.

The Benton Central girls dropped a 9-1 contest to eventual sectional champion and state 2A #1-ranked West Lafayette in the Sectional 18 at Kankakee Valley.

The Covington boys’ saw their post-season go two games as they took down Indiana Math and Science by a 5-1 score in the 1A Sectional 41 opener at Cascade after being tied 1-all at the half.

“We got off to a slow start in the first half against IMSA, probably due to nerves,” said Covington head coach Brennan Crose. “We settled down in the second half, having possession with a purpose and being more dangerous in the attack.”

Crose was less happy with the Trojan performance in game two against their host, #15-ranked Cascade, in what became a 3-0 loss.

“I thought we were pretty flat,” he explained. “We moved the ball, played quick but we couldn’t get over the hump. Their athleticism gave us some trouble, but we battled for 80 minutes which I was pleased with. Sometimes the ball just doesn’t go in for you.”

The Covington girls reached the championship match of 1A Sectional 41 at Southmont with wins over South Vermillion 3-0 and a dramatic 1-0 win over North Putnam that saw the Trojans take a 1-0 lead in the 11th minutes on a Emily Holycross to Isabella Lynch goal.

Eight minutes later, the Cougars were awarded a penalty kick that Shiann Haymaker, the Trojan goalkeeper, blocked to keep the lead.

She would have seven other saves including a double touch in the second half to keep the clean sheet and move Covington into the sectional final.

In that contest, the Trojans were, like their male counterparts, up against a #15-ranked Cascade squad and the outcome was identical, a 3-0 loss.

Cascade senior captain and center back Sydney Gabbard said the Cadets came into the game fired up after seeing their boys capture a sectional title.

“We wanted to come out fast,” she explained, “but we didn’t do it. It took a while for us to settle down and play our game. We started communicating and good things started to happen and we were able to take control.”

In the contest, Covington spent much of the first seven or eight minutes threatening the Cascade goal, but eventually the ball skills and organization of the Cadets proved to be too much for Trojans in their initial year of competition.

Covington head coach Damon Hegg he thought his young team played hard, but simply could not find the back of the net against a very experienced defense set up by Cascade.

“There’s only so many things you can work on during the season and I think we did as well as we could,” he said. “We certainly improved throughout the year.”

Hegg, as a first-year coach of a first-year team, said he enjoyed both the highs and lows of the season, saying that coaching them “was more than I had hoped it would be.”

Asked what was the best part of the season, Hegg said, “It’s hard to pick a ‘best’ but I’d say it was watching the girls get to play and get some wins. They did all I could ask of them this season.”