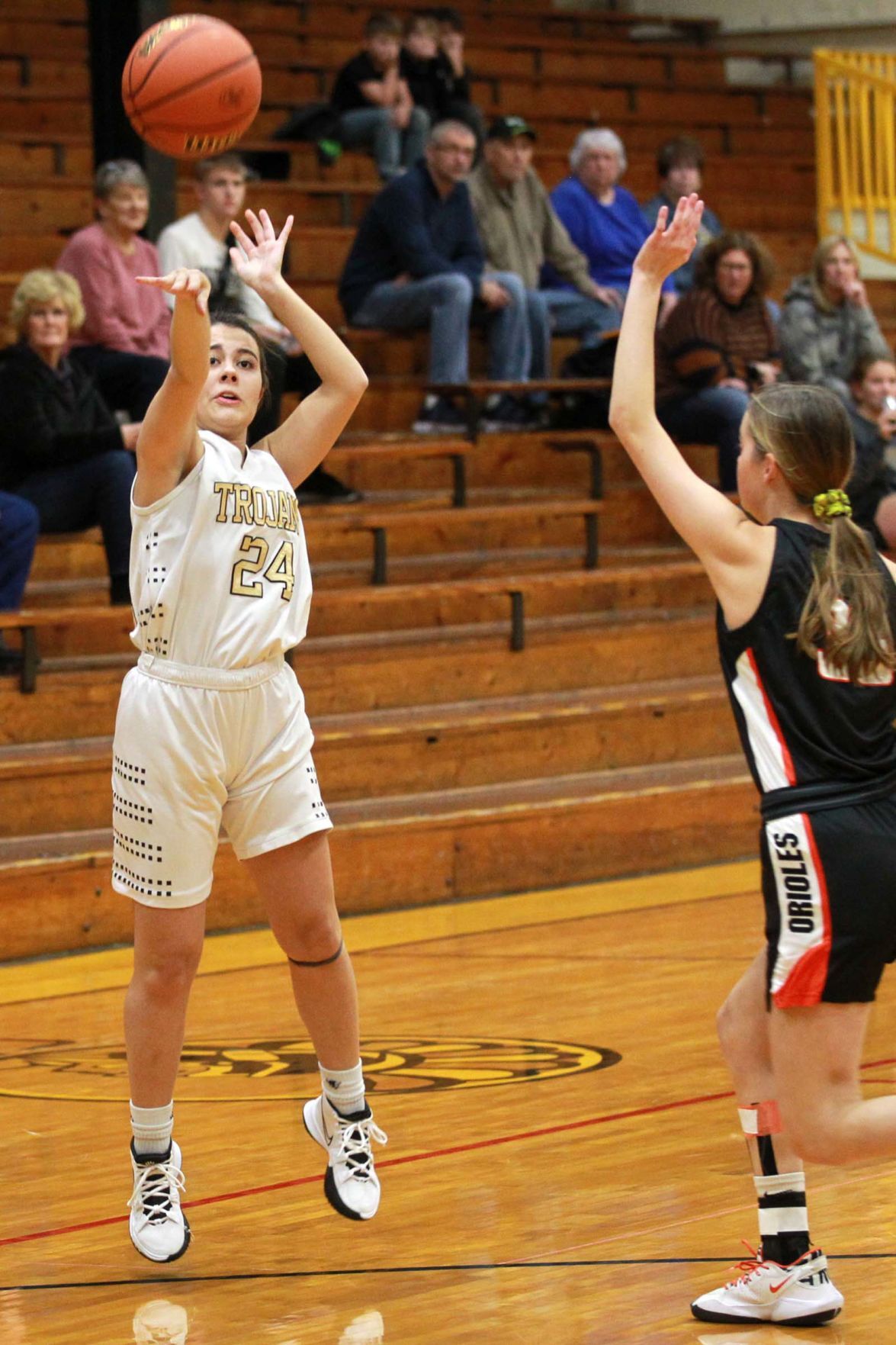 Magdalena Sandlin of Covington shooting a jumper before a defender can reach her. 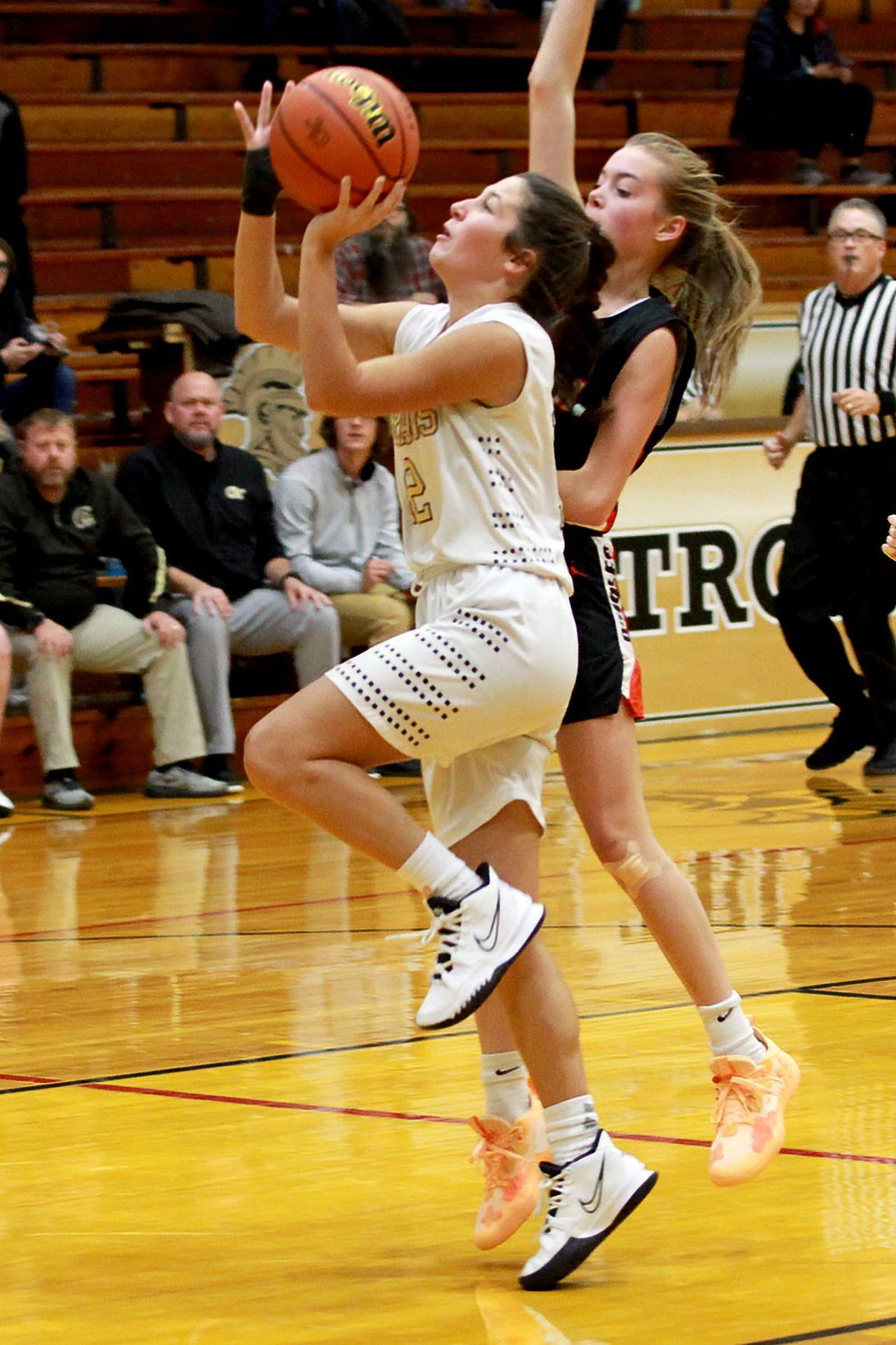 Briley Peyton of Covington going up for a lay-up. 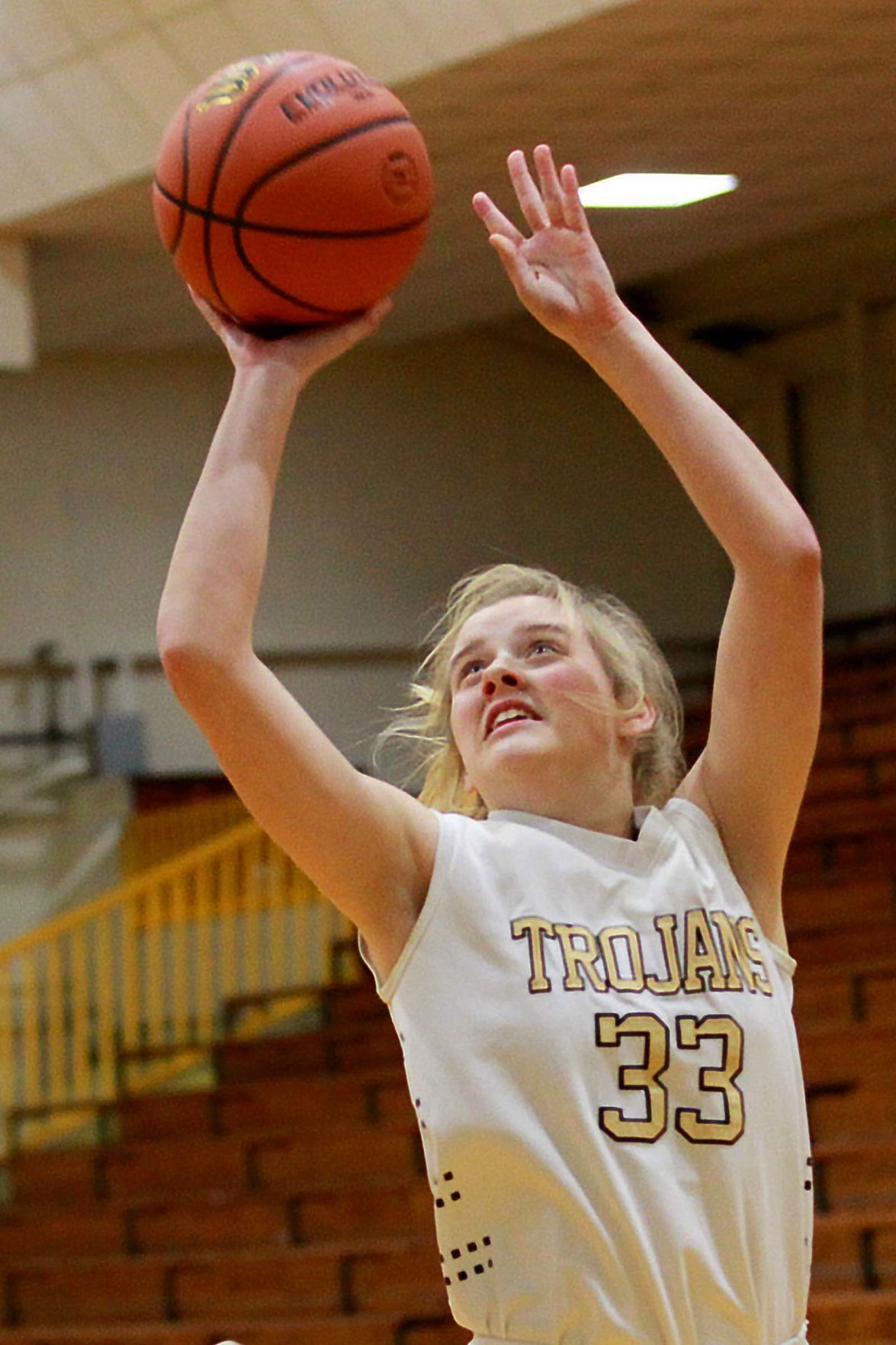 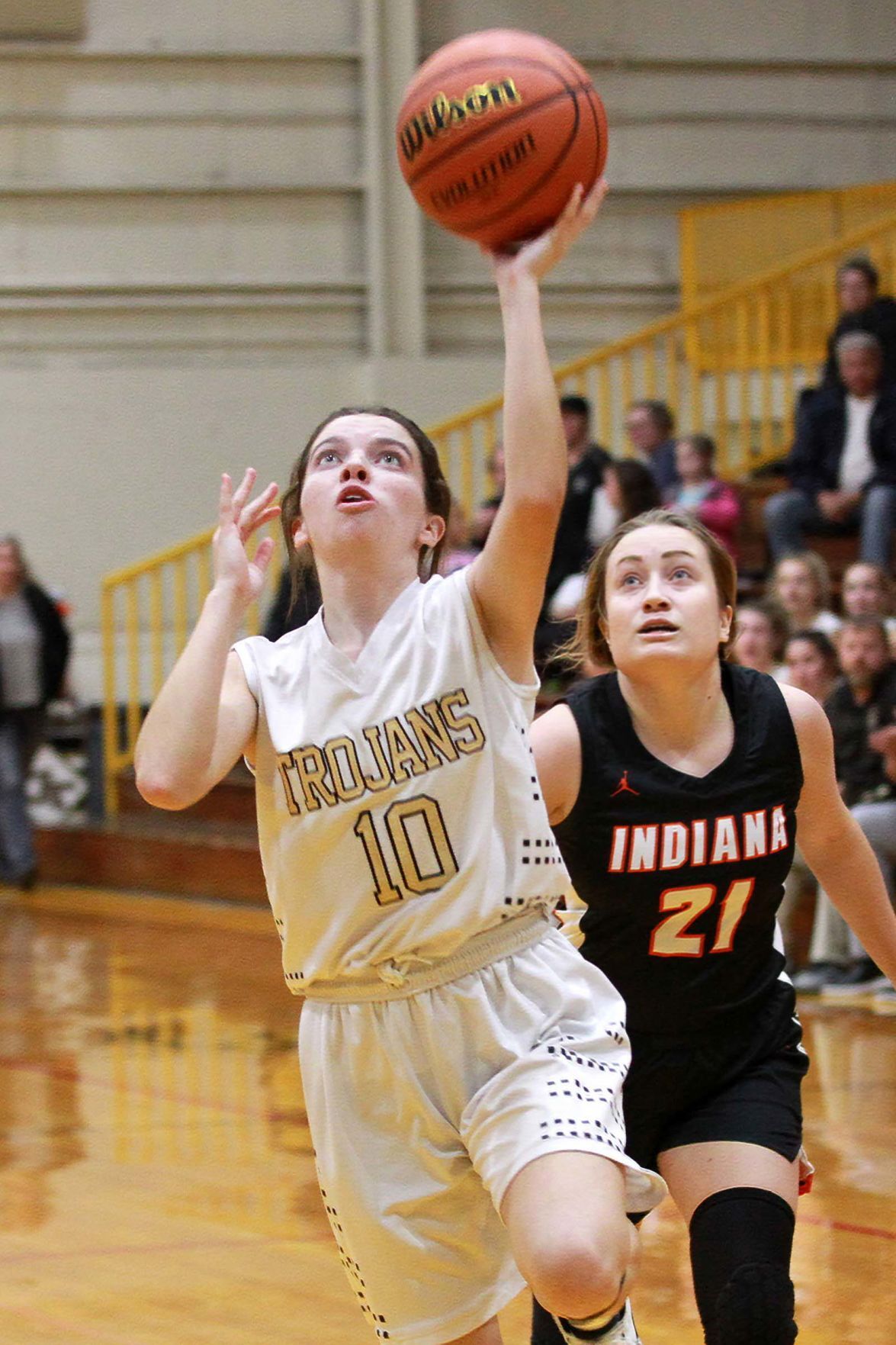 Therin Holland of Covington going up for a lay-up. 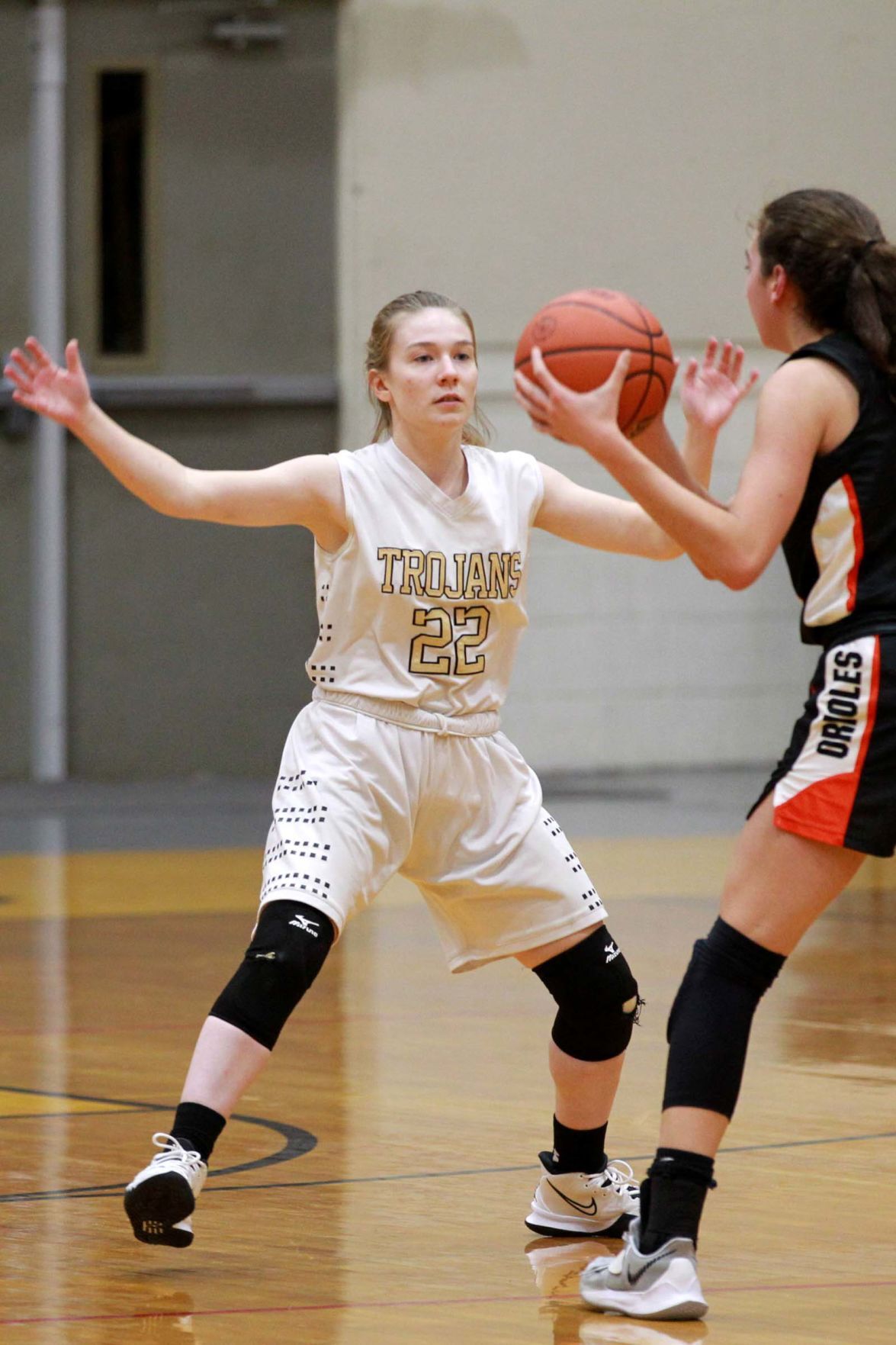 Magdalena Sandlin of Covington shooting a jumper before a defender can reach her.

Briley Peyton of Covington going up for a lay-up.

Therin Holland of Covington going up for a lay-up.

Covington hosted the Indiana School for the Deaf in girls’ basketball in the Trojan’s Middle School Gym and picked up their first win of the year, defeating the Orioles 42-27.

At this point in the season, especially with a young team, Covington head coach Travis Brown says he is looking for several things.

“I want to see improvement,” he explained, “and I saw some of that tonight. I’m trying to see who plays well with who – what rotations work – and I want to see who attacks and who can play defense. We’re not a team yet – we’re just a group of players – but that’s slowly changing.”

The Trojans started the game on an 8-1 run as Briley Peyton made a pair of three-pointers and Lily Hacquet got a putback against a single free throw for the visitors in the first four minutes of the contest.

It was almost two more minutes before anyone scored again, a driving lay-up by the Orioles, but Covington responded with a trey from Hacquet off a pass from Kali Pettit and closed out the quarter with a putback from Pettit for a 13-3 lead.

The Trojans continued their scoring streak in the second period as Therin Holland made a lay-up as did Micah Stonecipher, the latter assisted by Shiann Haymaker, before the Orioles got on the board again with a three-pointer that made it 17-6.

Hacquet scored again off another Haymaker assist then Emma Holycross got in the book with a free throw.

The visitors made a short jumper and then had multiple chances from the free throw line, but they could only make two of five including missing the front end of a one-and-one to trail 20-10.

Haymaker came back with a lay-up and then Holland hit a trey followed by an offensive rebound putback by Pettit that made the score 28-12 at the half.

The Orioles opened the scoring in the third quarter with a basket but Brooke Kirkpatrick matched it with a pair of free throws only to see the visitors add another three-pointer and a free throw for a 30-18 tally with about three minutes left in the period.

Lauren Vale hit a jumper off a pass from Pettit, Haymaker made a steal that she converted into a three-point play and Vale scored again against only a trey from the visitors to make it 37-21 going into the fourth quarter.

That period had only three baskets – two deuces from the Orioles and a trey from Peyton off an assist from Haymaker – with the rest of the points coming off free throws in a game that ended 42-27.

Brown said that he wanted to try different rotations and he did so throughout the contest.

Late in the game made a significant change, not personnel but positionally, with Haymaker moving from guard to the middle and having Kirkpatrick and Vale as the forwards.

This formation got both forwards attacking the basket with Haymaker saying she liked it, commenting that she is more comfortable playing inside where she could feed the other players rather than being out on the perimeter.

Brown said that he was pleased with his team’s defense as it allowed less than 30 points, noting that the players were active in the passing lanes.

On the other end of the floor, he thought the team moved the ball better than in their previous game and that the squad took better shots – though several failed to fall.

Photos from this game can be found at www.wcinews.info.