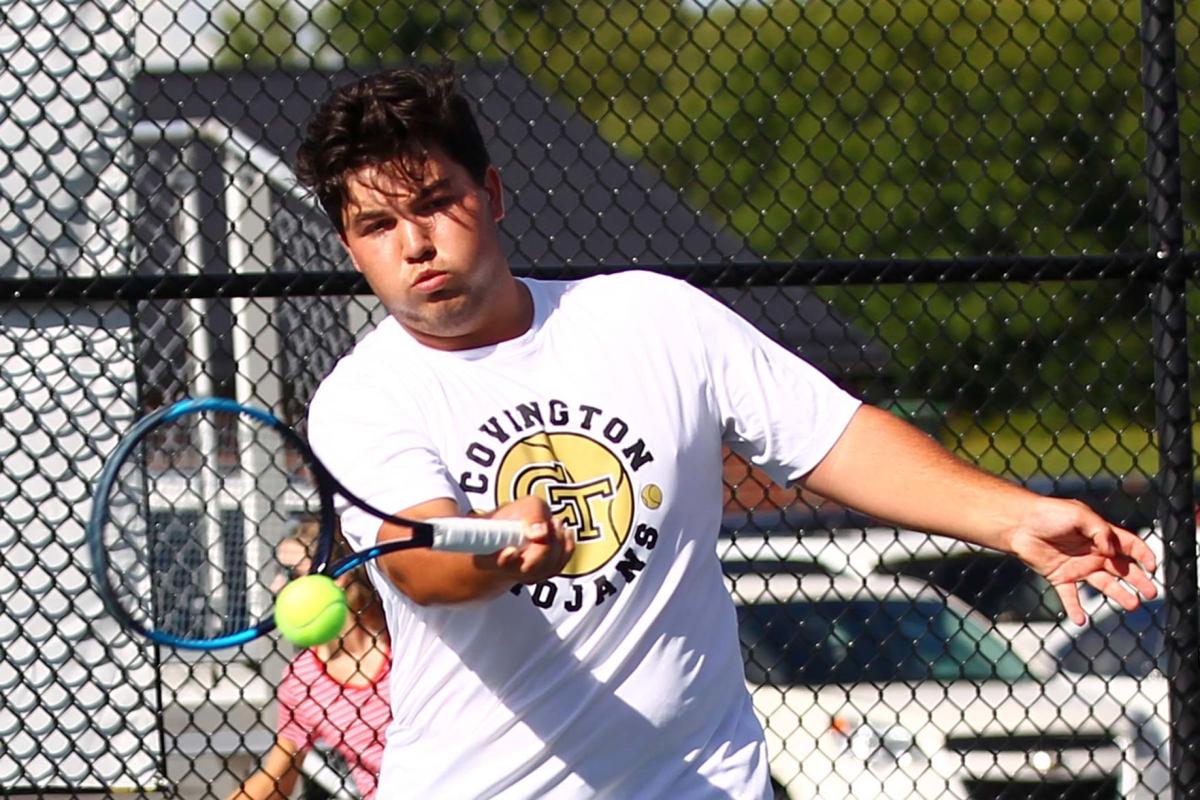 Nolan Potter, a Covington senior, hits forehand in a match with Seeger this season. 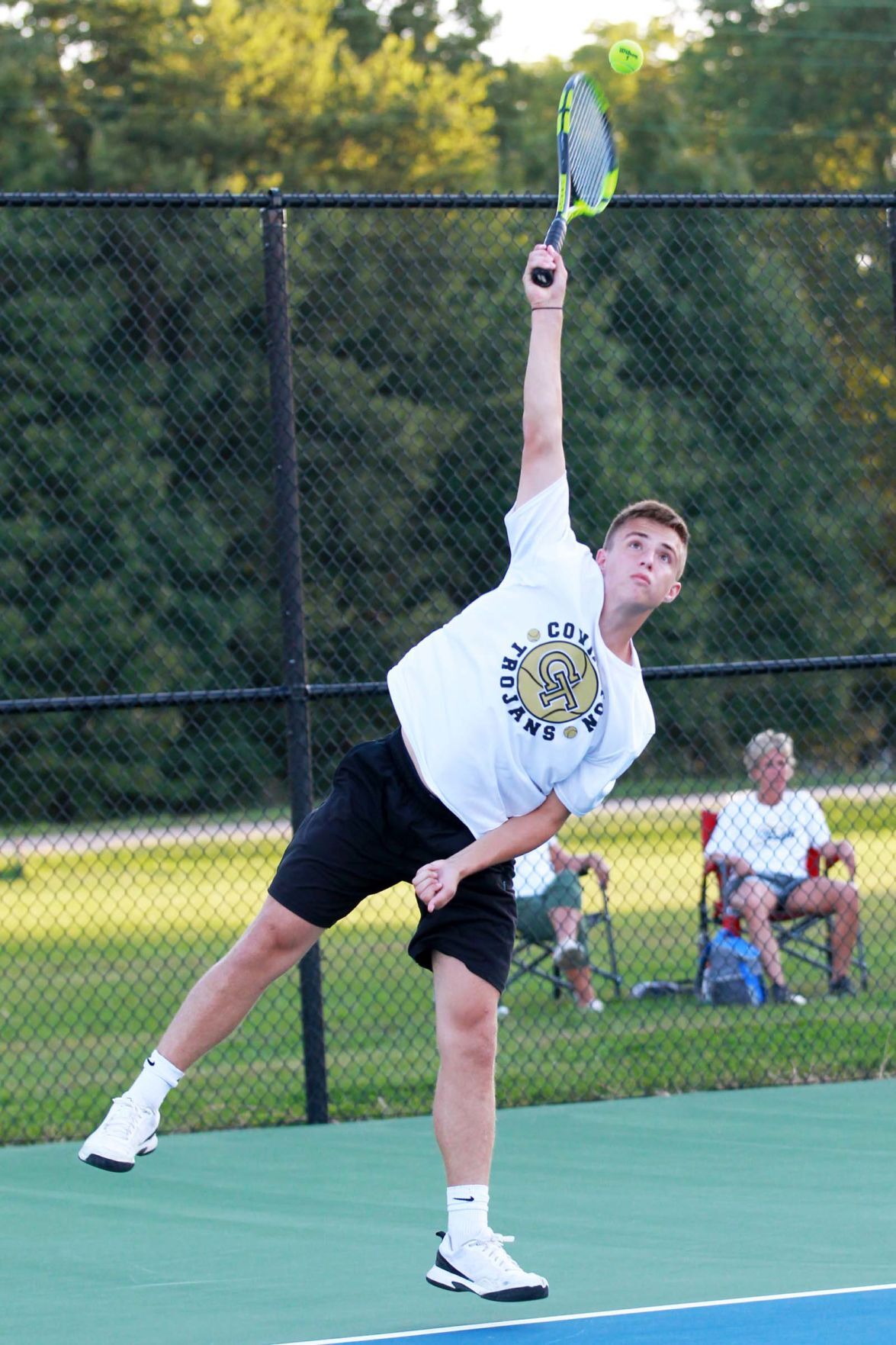 Calvin Springer, a Covington senior, serves in a match in the Wabash River Conference tournament.

Nolan Potter, a Covington senior, hits forehand in a match with Seeger this season.

Calvin Springer, a Covington senior, serves in a match in the Wabash River Conference tournament.

An historic season in Covington tennis came to an end at DePauw University in Greencastle in the state quarterfinals when the Trojans fell to the #7-ranked team in the state, Zionsville, by the score of 5-0.

Nine days earlier, Covington had been the first 1A-sized school to win a Regional in boys’ tennis in the 53-years that the IHSAA has held the single-class tournament by defeating Terre Haute South 3-2 and then Northview 4-1.

Three days after that win, they captured a semi-state title by defeating Rushville by a 3-2 score to earn their way into the state tournament, the only unranked team in that group of eight that otherwise contained the #1, #2, #5, #7, #9, #12 and #16 teams in the state.

Terry Field, who has coached 33 years with the boys and 28 with the girls, said of his team “We don’t get to play the big schools except in the tournament, so we don’t get any recognition. We’ve proven we belong in the state tournament by winning our way into it.”

The draw put them up against Zionsville where the seven Trojans (two seniors, four juniors and one freshman) faced a team with four seniors, one junior and two sophomores.

Going into the match with Zionsville, the Trojans were cheered on by a pep session that Field said “had maybe 150 townspeople” attending and the team reportedly had the loudest supporting crowd in the quarterfinals.

The Covington team knew what they were getting into when the faced Zionsville.

They had heard all the stories about the numbers (292 Covington students and 2439 people in the town versus 2153 students at Zionsville), but they knew those numbers were not the story of the game.

Nolan Potter, who with his brother Myles, played 1-doubles for the Trojans explained that assistant coach Jim Persinger had tossed away any reference to those big numbers.

“Jim told us the only thing that matters is the player across the net from us – one guy in singles or two in doubles – the size of the rest of the school doesn’t matter,” said Potter. “We know they are good, but we’ll go out there ready to play just like any other match.”

Four of the five matches with Zionsville were decided in two sets, but senior Calvin Springer at two singles won his first set 6-4 before falling 7-5 in the second and then dropping the super tiebreaker 10-7.

With the loss the Trojans ended the season with a 16-1 record, having won the Bi-County and Wabash River Conference titles in addition to the sectional, regional and semi-state crowns.

Zionsville would go on to become the state runner-up up to Carmel who won their 14th state title and fifth in a row.

Nolan Potter ended his Covington career with a 24-1 record on the season and an 81-15 record overall, good enough for first place in total wins in boys’ school history.

Springer, the other Trojan senior, ended his season 23-2 with a career record of 67-21 which is good enough for third place in wins by a Covington boy.

Evan Norton, a junior who played 1-singles, ended the year with a 22-2 record and has amassed 58 wins against 11 losses in his career so far.

Myles Potter, a junior, ends the season with the same 24-1 record as his brother as the two played together all year and he has a 64-9 career tally to-date.

The remaining team members for the Trojans were juniors Emmett Reynolds and Jackson Kindell along with freshman Urban Roarks.

The team also added their #1 JV player in Peyt Shumaker to the squad who stepped in throughout the season whenever one of the seven varsity players was unable to play.