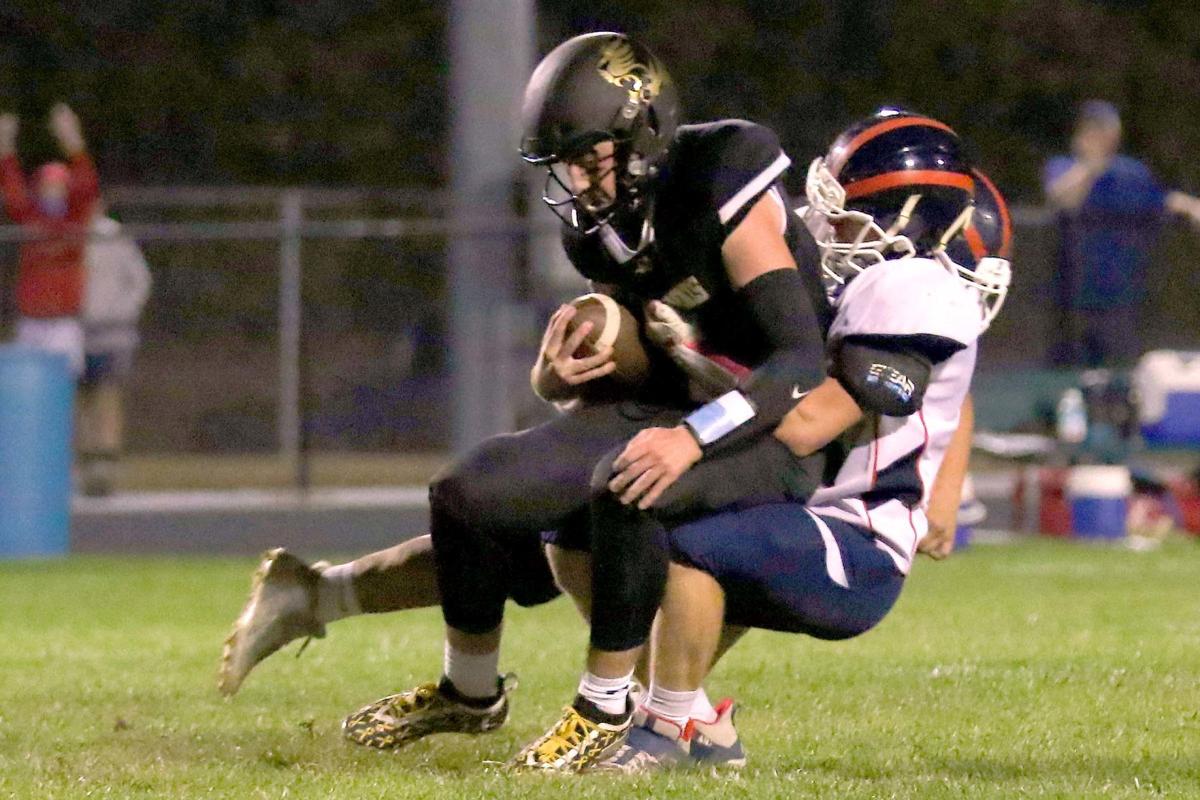 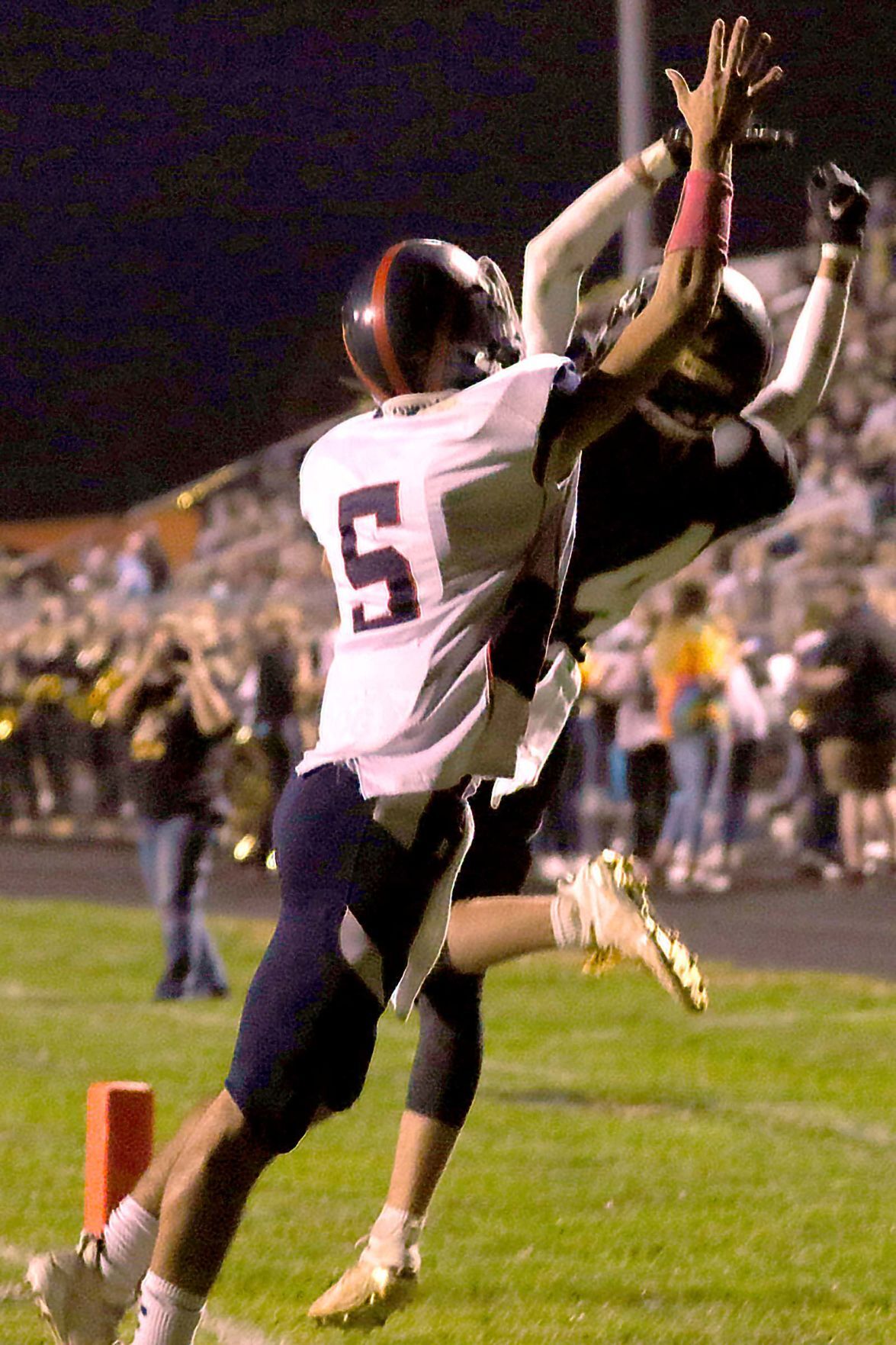 Owen Snedeker of Seeger and Braden Allen of South Vermillion both leap in vain for a pass into the end zone. 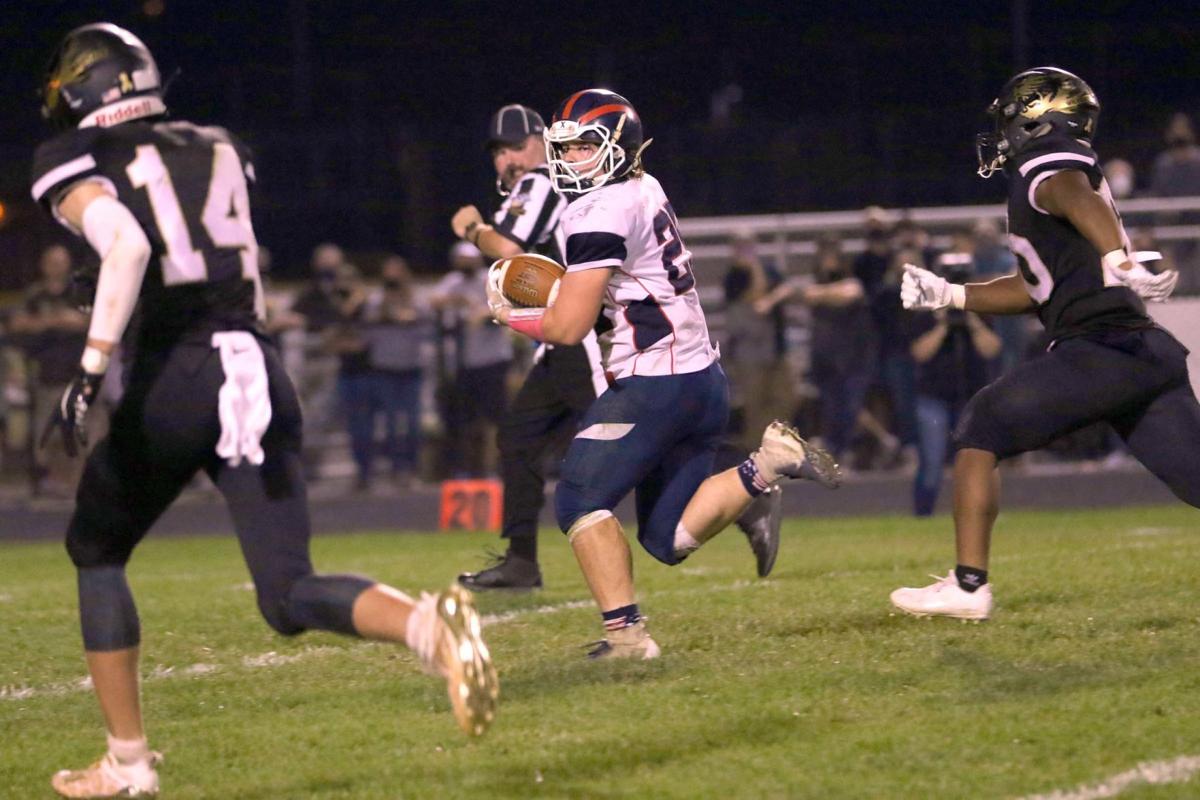 Jameson Sprague of Seeger looks at a pair of South Vermillion defenders as he goes 47 yards on a catch and run. 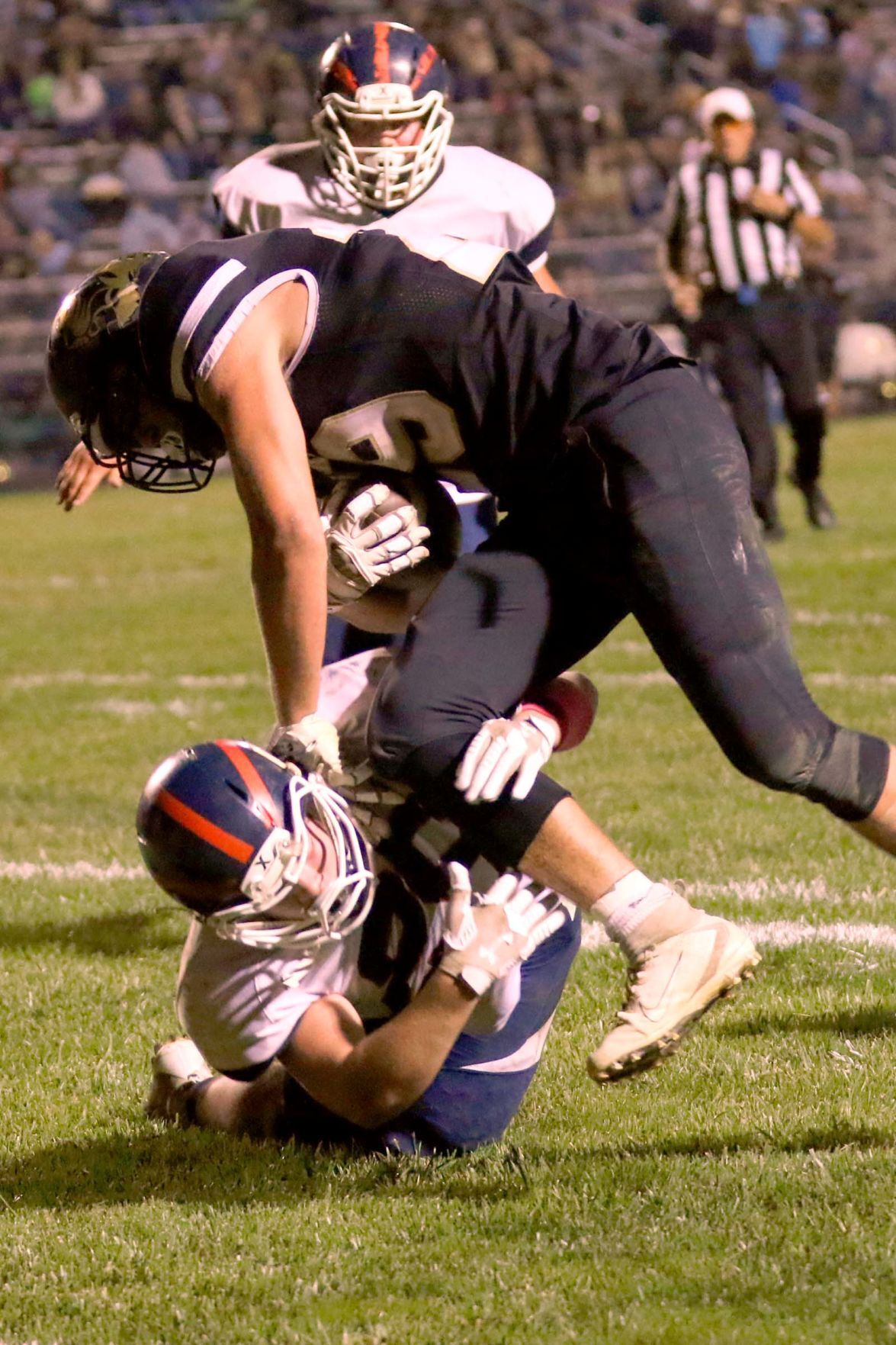 Owen Snedeker of Seeger and Braden Allen of South Vermillion both leap in vain for a pass into the end zone.

Jameson Sprague of Seeger looks at a pair of South Vermillion defenders as he goes 47 yards on a catch and run.

Seeger traveled to South Vermillion to face the Wildcats in a battle for the top spot in the Wabash River Conference, but the Patriots fell to their hosts 25-15 in a game that saw the visitors spending much of the time in their own end of the field.

The game opened with South Vermillion bringing the opening kickoff out to the 34 from where the Wildcats took seven plays to cover the remaining 66 yards to take a 6-0 lead with less than four minutes gone in the game.

Freshman returner Scott Smith took the ensuing kickoff out to the Patriot 26 and from there the visitors began to grind out yards on the ground.

Hunter Thomas and Jamison Sprague took turns carrying the ball and it reached the Wildcat 40 before Seeger took to the air with a pass from Owen Snedeker to Khal Stephen that picked up a first down on the 34.

Sprague ran the ball to the 20 on the next play, but a three-yard run and three incompletions turned the ball over on downs on the Wildcat 17.

South Vermillion has quite a bit of depth to their offense and they showed it on their second drive of the contest as they used four different runners to move the ball to the Seeger 40 before being forced to punt.

The Patriots got the ball on their 20 as the punt carried into the end zone, but it was a quick three-and-out for Seeger followed by a punt of their own.

South Vermillion moved the ball deep into Patriot territory before fumbling when Smith and Stephen combined to bring down a receiver who fumbled before his knee hit the ground.

Seeger recovered on their own 19 but had another three-and-out with a punt to follow.

That gave the ball to South Vermillion on the Patriot 49, but once again the visitor’s defense rose up and stopped the drive to force a punt.

“Our defense stiffened a couple of times and played well,” Herb King, the Seeger head coach said. “We got stops but couldn’t get field position.”

The Patriots would get the ball for ten series in the game with their average starting point being their own 24, their worst start being on their four and their best on their own 35 when South Vermillion sent a kickoff out of bounds.

Seeger picked up two first downs on their next possession, both coming on passes from Snedeker to Stephen, but three straight incompletions turned the ball over again.

South Vermillion took over on their own 37 and ran five plays including a 30-yard pass completion to take a 12-0 lead.

On the two-point try that followed, Peyton Martin and Hunter Frodge combined to sack to quarterback to keep the margin at a dozen.

The Patriots dodged a bullet on their next possession as they completed a pass where the receiver, with about 20 seconds left in the half, tried to pitch the ball to a teammate but found a Wildcat instead.

South Vermillion threw deep for what would have been a touchdown, but the receiver dropped the ball on about the five-yard line.

A Seeger pass interference call put the ball on the Patriot 34 from where the Wildcats threw into the end zone but Snedeker broke up the pass to end the half with the score still 12-0 in favor of the hosts.

Seeger got the ball to open the third quarter and they struggled to move, but converted a fourth-and-two from their own 39 for a 47-yard gain on a pass from Stephen to Sprague.

Snedeker then threw to Martin and then Stephen ran the final four yards for a touchdown that, with an extra point kick by Stephen, made the score 12-7 with less than two minutes gone in the half.

South Vermillion came right back with a touchdown of their own in under three minutes as the team used three running backs and two receivers followed by a quarterback keeper for an 18-7 score as the extra point kick hit the goal post.

Seeger continued to close the gap as they ran an eleven-play drive good for 67 yards and a touchdown in a series who highlight was a 15-yard scamper by Stephen on a fourth-and-one that put the ball on the six.

He carried on the next play for the final few yards and when the two-point try succeeded, the margin was only three at 18-15 in favor of South Vermillion.

A pair of Patriot penalties enabled the Wildcats to extend their next drive, but the hosts could not reach the end zone and turned the ball over on the Seeger four.

Facing their worst field position of the game, the visitors ran the ball twice to net two yards and then passed for another four meaning they had to punt from their own ten.

The kick only reached the Seeger 37 from where the Wildcats took just five plays to score again, this one capped off by a two-yard run that made the score 25-15 after the extra point kick was good.

Three plays into the next Seeger drive saw the Patriots offense make a mistake as either the quarterback misread a route or the receiver went the wrong way, but the net result was an interception by the South Vermillion defense.

“That play was open for a score,” King lamented, “but they got pick.”

South Vermillion could not capitalize on the turnover and they punted, but the final Seeger possession saw a lineman tip a pass and then grab it for an interception.

The Wildcats proceeded to run out the clock to pick up the 25-15 win.

“The only disappointment on the night was the score,” King said. “We played hard, but not as well as we are capable. We had too many mistakes.”

The two teams will face each other again in the 2A Sectional in two weeks and it again will be played at South Vermillion.

“We made some growing pain mistakes,” King said about the game, “and we were missing a couple of starters with others playing out of position. We will be better when we see them in two weeks.”