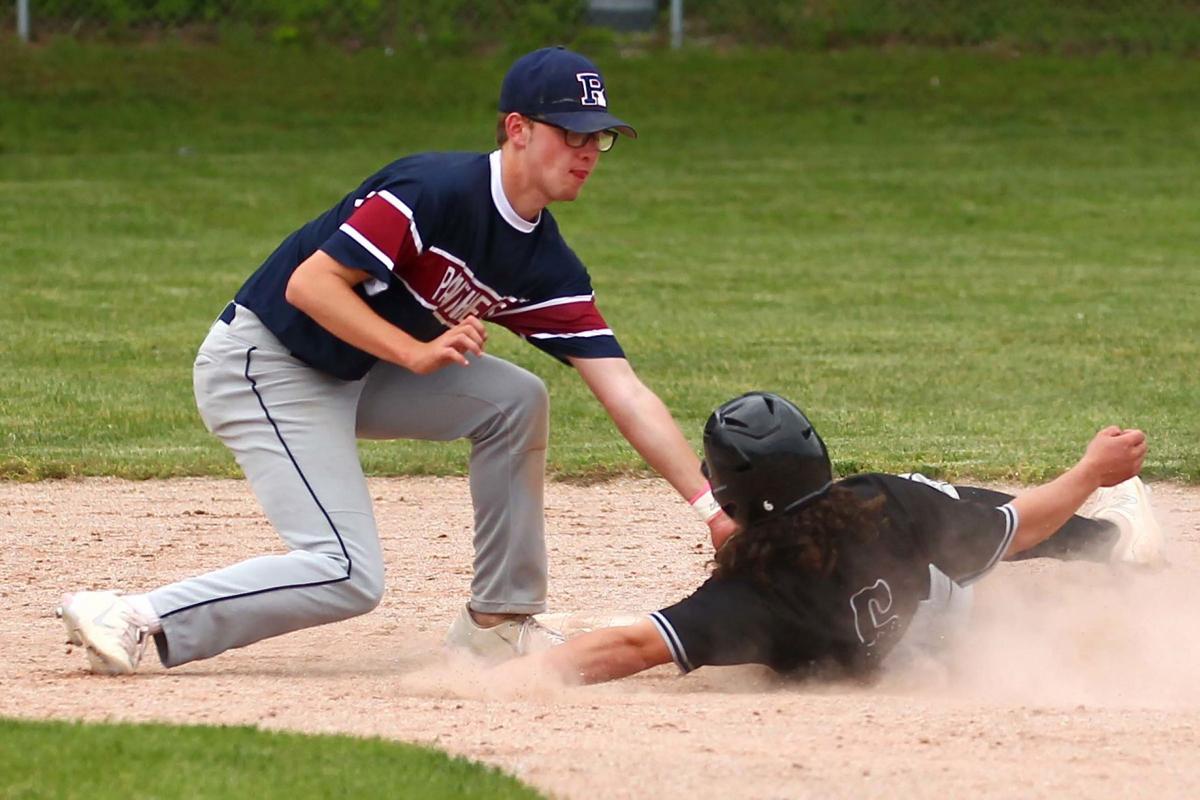 Courtesy runner Austin Wallace of Covington tried to steal second but was tagged out by shortstop Peyton Robins of Riverton Parke. 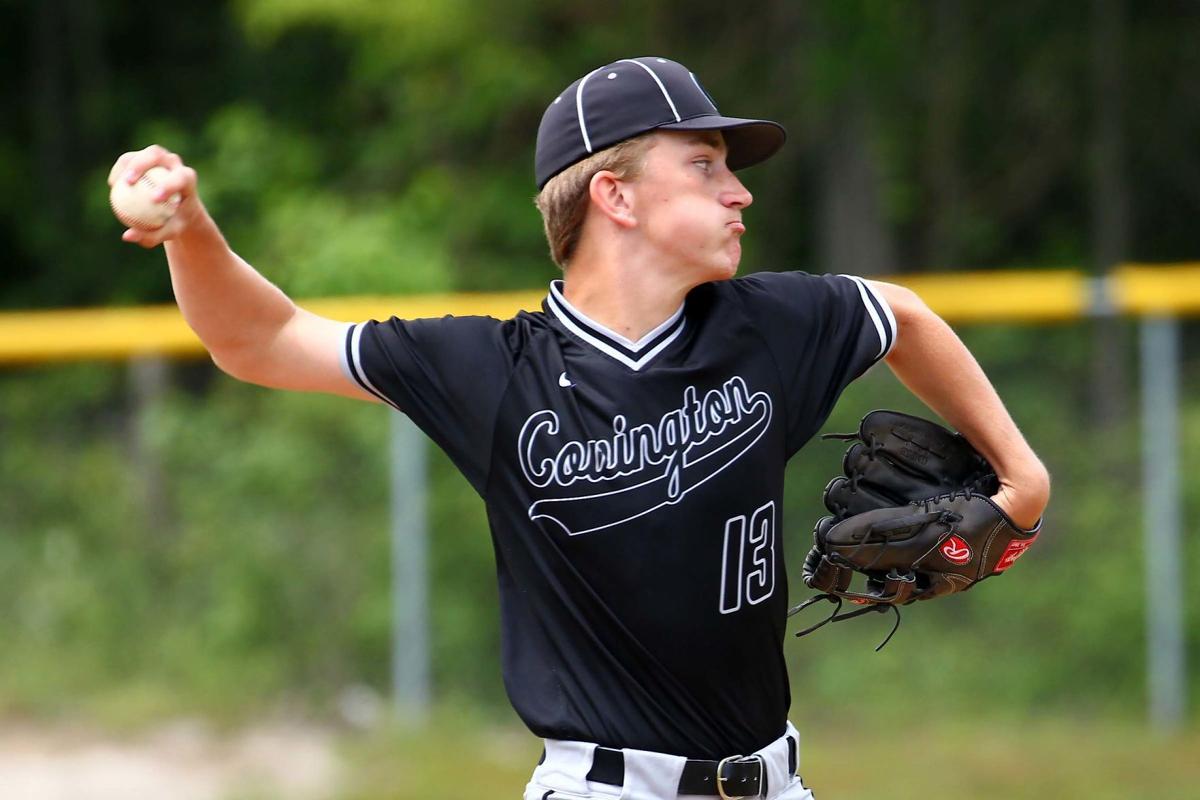 Pitcher Jordan Inman of Covington throws to second base on a pickoff try in the seventh inning. 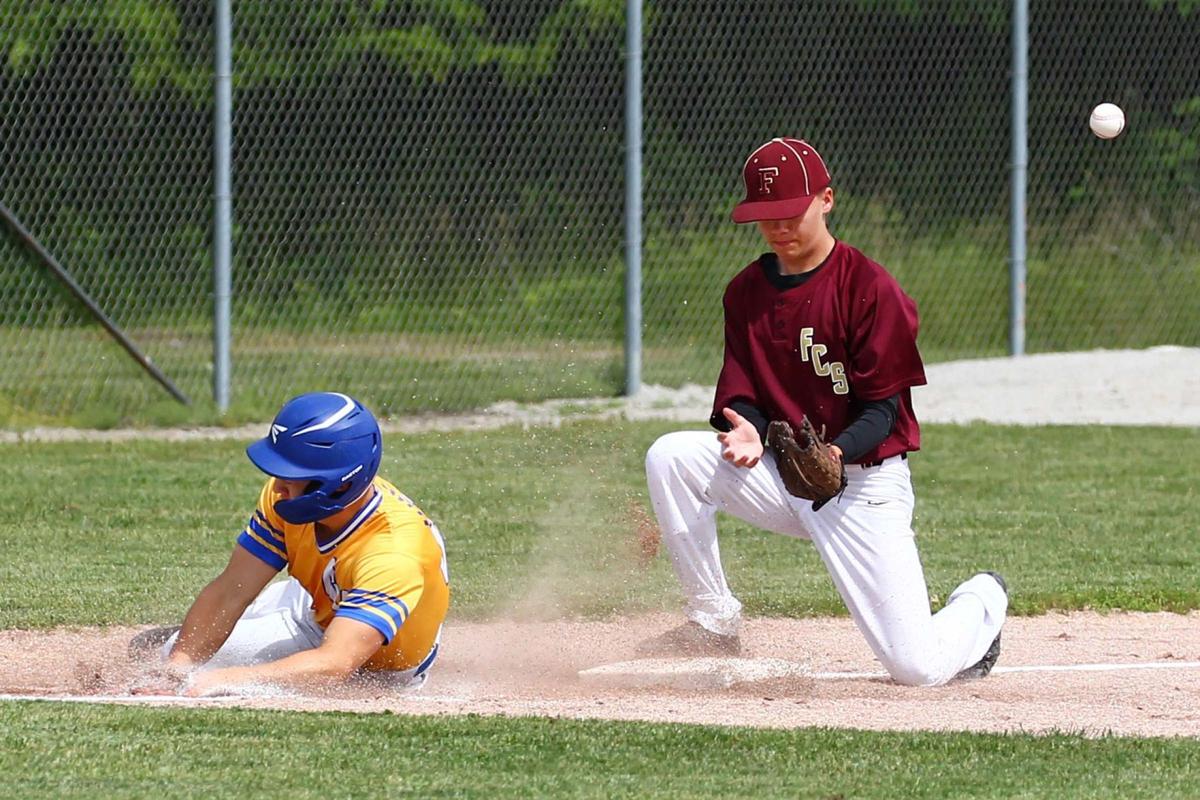 Aidan Hinchee of North Vermillion slides into third base as the Faith Christian fielder sees a throw go past him.

Courtesy runner Austin Wallace of Covington tried to steal second but was tagged out by shortstop Peyton Robins of Riverton Parke.

Pitcher Jordan Inman of Covington throws to second base on a pickoff try in the seventh inning.

Aidan Hinchee of North Vermillion slides into third base as the Faith Christian fielder sees a throw go past him.

Riverton Parke, playing on their home field, won the 1A Sectional 53 baseball title by defeating Covington in the semifinal and then North Vermillion in the final, both on one-hit pitching.

It was the second sectional championship in a row for the Panthers and their tenth in school history.

Covington, who had defeated Attica in the sectional opener by a 13-8 score, came into the game with Riverton Parke having won three of their last five games.

North Vermillion reached the finals by defeating Faith Christian in the first semifinal game of the day by the score of 6-4.

In that contest, the Falcons sent all nine of their batters to the plate in the first inning – which was their entire active roster – where they scored four runs thanks to an Eagle error, two walks and singles by Wyatt Walters, Aiden Hinchee and Cameron Cheuvront.

They added a run in the third on a walk, a sacrifice by Hinchee and an error to lead 5-0.

Faith Christian got on the board in the fifth inning thanks to three consecutive wild pitches from the Falcons that, along with an error, allowed the Eagles to come within a run at 5-4.

North Vermillion picked up an insurance run in the bottom of that inning with a walk, a single by Hinchee and a sacrifice fly by Cheuvront to create what would become the final score of 6-4 as neither team scored in the final two frames.

Maris Clark, the Falcon head coach, said his team missed some opportunities to add to their run total, but that he was pleased that their defense kept the Eagles off the scoreboard toward the end of the game.

In the second semifinal game of the day, Covington saw Riverton Parke jump out to an early advantage when the leadoff hitter sent a ball over the leftfield fence for a home run.

The Panthers sent three more runners across the plate later in the inning to take a 4-0 lead before Covington even had an at-bat.

Nine pitches later from Panther hurler Derek Lebron and the Trojans had struck out three times to end the inning.

Lebron would go on to strike out a total of fourteen Covington batters in the game, a performance he called “my best game of the season”.

He explained, saying, “I wasn’t doing anything special. I just threw first-pitch strikes to try to get ahead of the batter and then tried to spot my curve where I could.”

The Panther junior almost threw a perfect game against Covington, but he saw it broken up on a fluke play in the fifth inning where a hit by Trace Hammer caromed off the ground and hopped so high that, by the time it came down, Hammer had reached first base safely.

Hammer, the Trojan catcher, was replaced by a courtesy runner who was gunned down on the next pitch by strong throw from Riverton Parke catcher, Pierson Barnes.

For the remainder of the game, the Covington batters would guess wrong about whether they would see a fast ball or a curve as Lebron faced the minimum 21 Trojans in a 9-0 win for the Panthers.

“They hit the ball and we didn’t,” Covington head coach Scott Holycross explained the loss for his team. “We’re a young team. While we thought we were ready, we weren’t.”

The wins by North Vermillion over Faith Christian and Riverton Parke over Covington set up a final that saw the Panthers do to the Falcons what they had done to the Trojans in the previous game, namely strike out the side in the first inning.

It only got worse for North Vermillion as Riverton Parke scored six times in the bottom of the inning despite Falcon freshman pitcher Jerome White throwing according to Clark.

In the second inning, the Falcons got what would be their only hit of the game, a single to center by White, but he was erased trying to steal second base.

The Panthers added two more runs in the second and two more in the third to lead 10-0 to set up the ten-run rule that came into play when North Vermillion could not score in the fourth or fifth innings.

“We knew what we were getting into,” Clark said about facing a team ranked in the top 25 at the time. “They’ve got a bunch of juniors and we’ve got freshmen just learning the game.”

Clark said he saw great improvement in his squad over the year, explaining, “We started coming together as a baseball team. At the start of the season, we were just a collection of athletes, but over time we became a team.”

Riverton Parke would go on to the Carroll regional where they would fall in the championship game to Cowan by the score of 9-3.