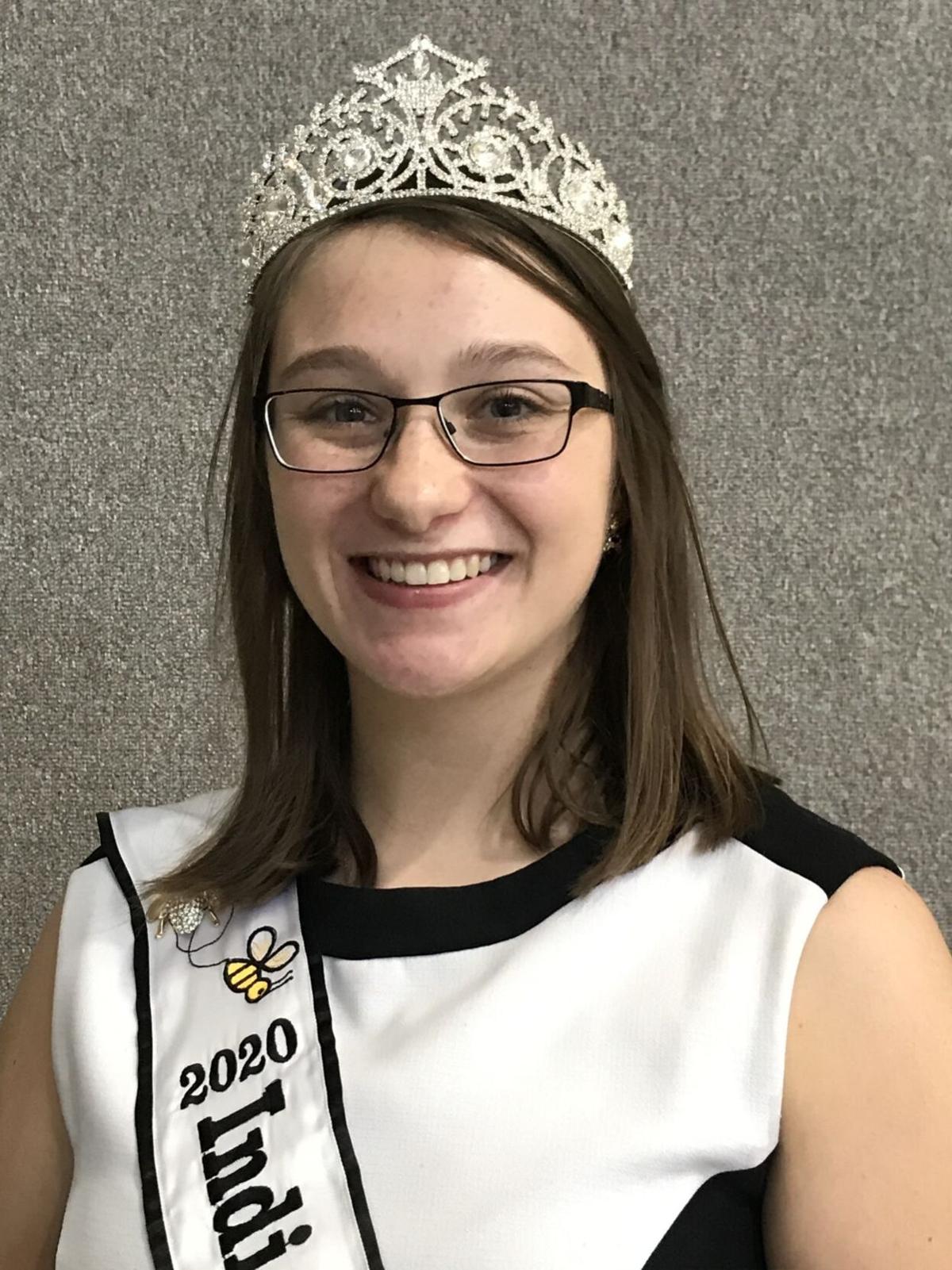 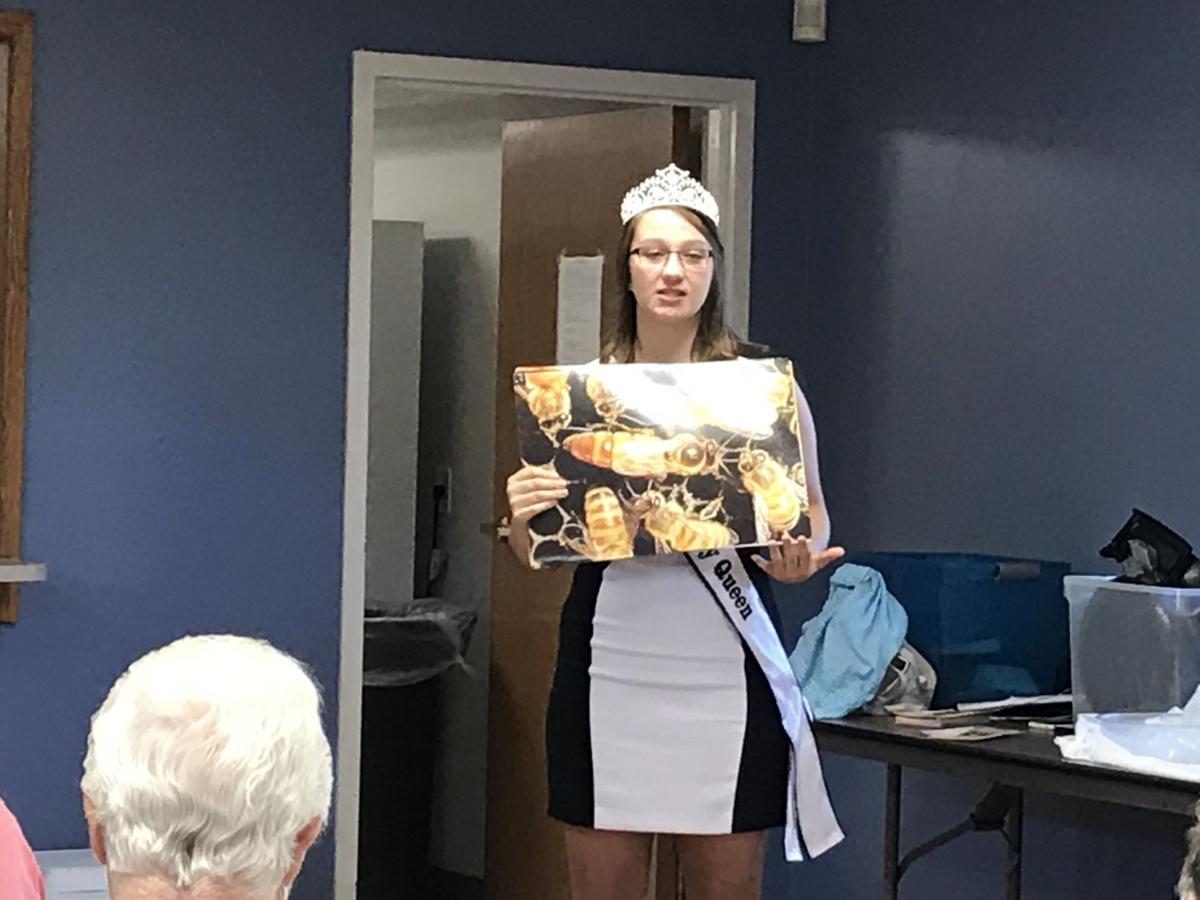 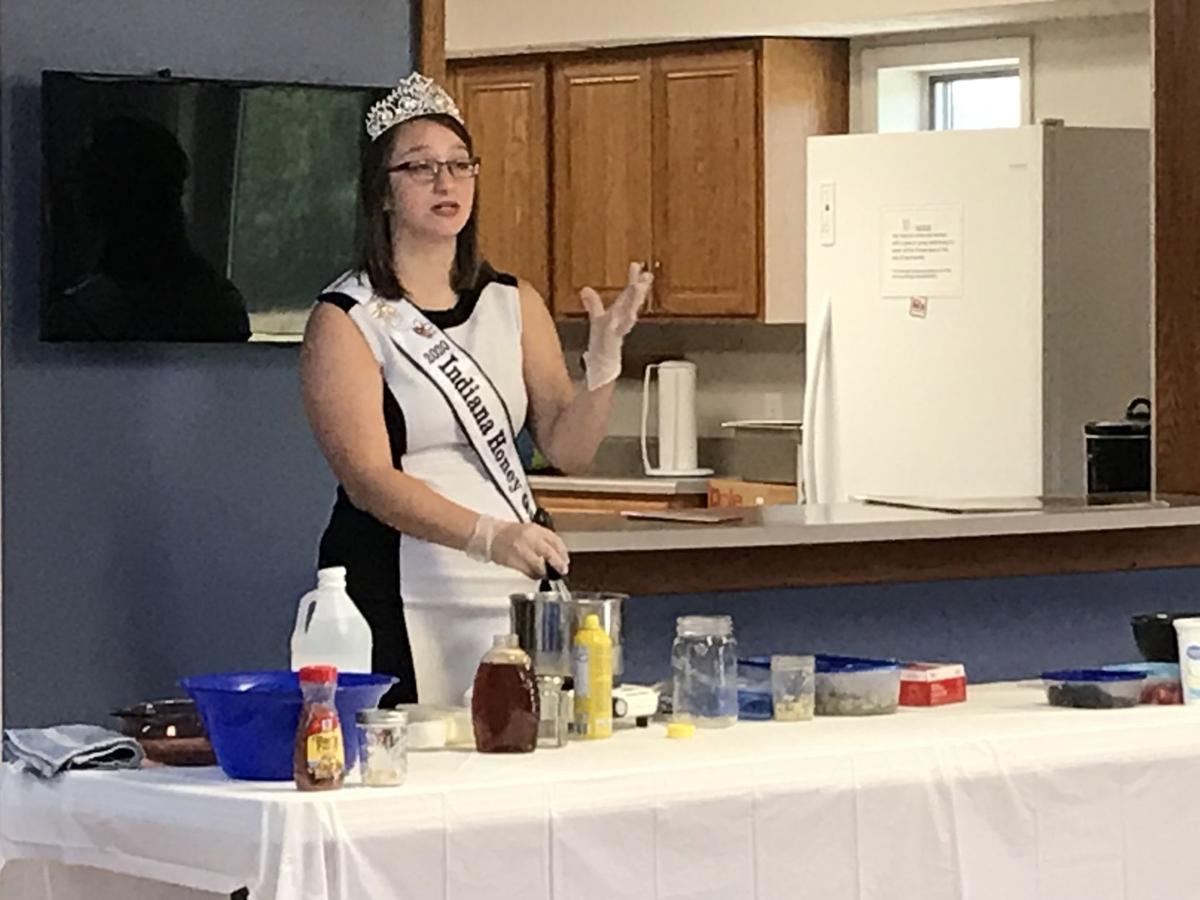 That is when the Indiana Honey Queen, Mikayla Ricketts, visited the Young at Heart group at the Church of the Nazarene in Hillsboro.

Mikayla said she is going into her sophomore year at Marion University in Indianapolis, where she is studying nursing. She wants to be a neonatal nurse.

To be Honey Queen, a person must be 18 years old and a bee keeper. The contestants write an essay about bees, then go through an interview with the judges.

There is a fall conference, where speakers talk about bees and at that event the Honey Queen is crowned. The queen serves from October to October. She visits schools, markets and other areas giving demonstrations and promoting honey bees.

So far this year, Mikayla has visited some places around Indiana promoting honey bees.

Mikayla said how often they extract the honey depends on how well the season goes. They take their bees to Georgia to overwinter, where they also extract honey.

Mikayla said honey bees are so useful and impact daily life. “They pollinate 80 percent of our food,” she said. “Every one third bite of our food is pollinated by a honey bee. They are so vital to our life.”

She said while it is preferred to have a larger area to keep bees, people in cities will keep them on their roofs.

Mikayla said getting to interact with people has been the most fun thing about being Honey Queen. She enjoys telling people about the importance of honey bees.

She talked about the queen, the drone and the worker bees. The queen bee is the largest bee in the hive. She stores the eggs in her abdomen. “In about peak production, which is mid-May to mid-July she lays about 2,000 eggs a day,” she said. “She does not leave the hive. She only leaves the hive twice in her life.”

One of those time is the mating flight, where she leaves the hive to mate with the drone bees, the male bees. This occurs when she is seven to 10 days old. The other time she leaves the hive is to swarm. This action would happen, she said, if there is no more room in the hive. The queen will take have of the bees and swarm to find a new hive.

The queen bee only stingers other queens, not people. When she hatches she goes and stings the other queen cells, so she is the only queen in the hive.

The bees have hair all over their body, except for their wings, which allows them to collect pollen. They even collect pollen on the hair on their eyes.

Scenes from the Warren County Fair

The worker bees have jobs within the hive depending upon their age. The young bees are nurse bees, which take care of the baby bees. The guard bees protect the hive from invaders. The older bees go out to collect the pollen, nectar, sap and water. “A bee only visits one type of flower at a time,” she said.

Drone bees are the bigger bees. They have no tasks. They just fly, looking for queens to mate. After they mate, the drones die. The drone bee does not have a stinger.

In the fall or winter, the worker bees kick the drone bees out of the hive, so they save the honey and the pollen for food for the winter.

Three main products from the hive are the honey, pollen and beeswax.

Honey is an anti-oxidant and anti-inflammatory. It can be used for cuts, scraps, burns and helps with healing. Pollen has 22 percent protein, the highest amount of protein in a single food, she said. Athletes and body builders use it to build muscle. It also is an anti-oxidant. People put it in foods, like yogurt. It should not be heated, she said, because that kills some of the protein properties.

Beeswax is used in many things, like candles, shoe polish, floor polish and threading needles when sewing.

Normally, honey bees will not go after a person unless they feel attacked.

Kristy Dooley, a member of the board for the Beekeepers of Indiana , talked about keeping bees. Her family is from Rockville, where they live on a farm with 23 hives. “All are doing well and have honey that needs to be extracted,” she said. They extract the honey several times a year.

She said there are a series of boxes where the honey collects. They extract the honey from the top boxes and leave the honey in the bottom two boxes for the bees. In the boxes there are about 50,000 to 80,000 bees.

She said there are about 2,000 members of the state board, with 34 different clubs throughout the state. “If ever you have a swarm, there is a listing on both the DNR website, where it lists beekeepers who will come and help to assist with bee removal or you can go to the Beekeepers of Indiana website and there is a list of beekeepers there,” she said. “If you ever have a swarm, please call a beekeeper. Find someone to come and get them for you. Bees are very, very important.”

Lacy D0ooley was the 2011 Honey Queen. She said she and her brother started raising bees in 2007 as a 4-H project. “It’s been a really fun adventure for all of us,” she said.

Kristy said watching a bee swarm is something to watch. The bees are very docile at that point. She said they are only protecting the queen and finding another place to live.

Honey will last forever if kept sealed and dry. If the lid is not on it can draw in more moisture. It’s not necessarily bad for you, she said. Mead, or honey wine, is fermented honey. Honey should be stored in a cabinet, not in the refrigerator. Keeping it in the refrigerator can cause it to crystallize sooner. It can still be used in the crystallize form. To correct the crystallization, heat a pan of water to boiling, then take it off the heat source and put the jar in the heated water.

The group was shown ways to use honey in their cooking. Honey will take on different properties depending upon what the bees feed on.

Some bee keepers will take their bees to a farm to pollinate a crop, such as pumpkins.