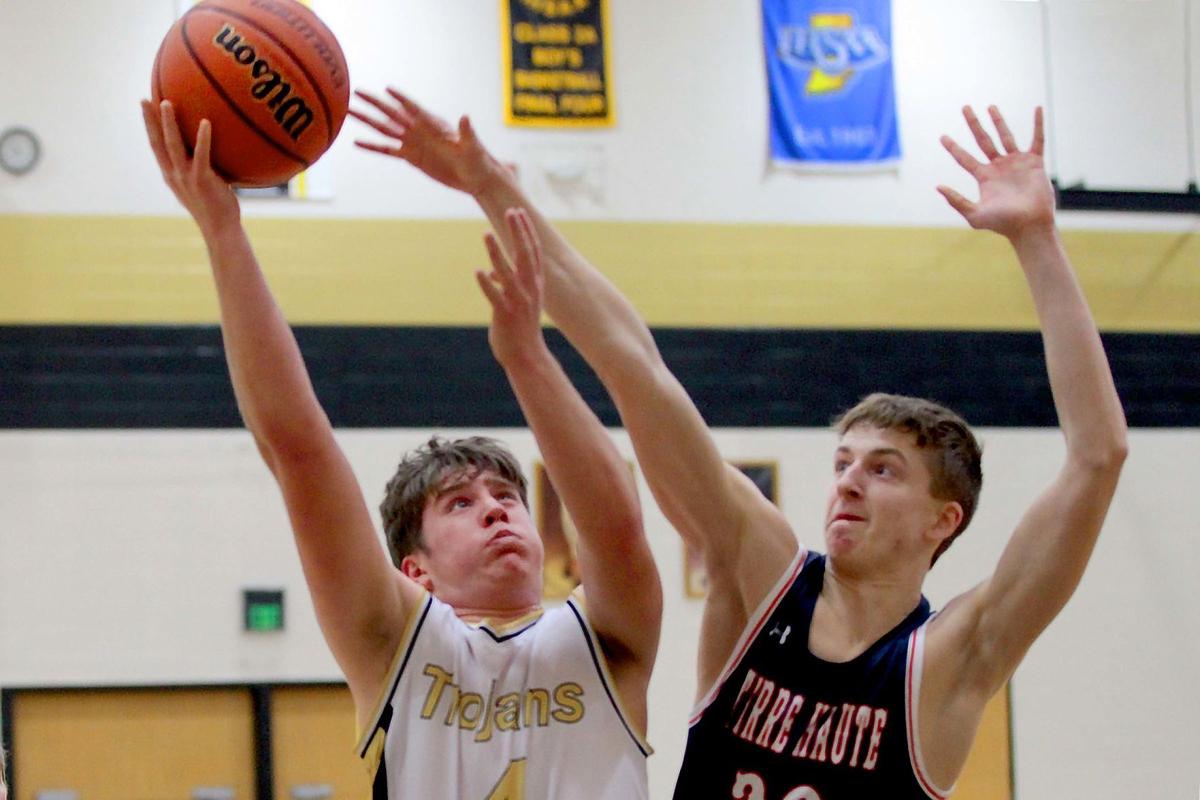 Neil Ellmore of Covington shoots a short jumper against the defense of Colin Frank of Terre Haute North. 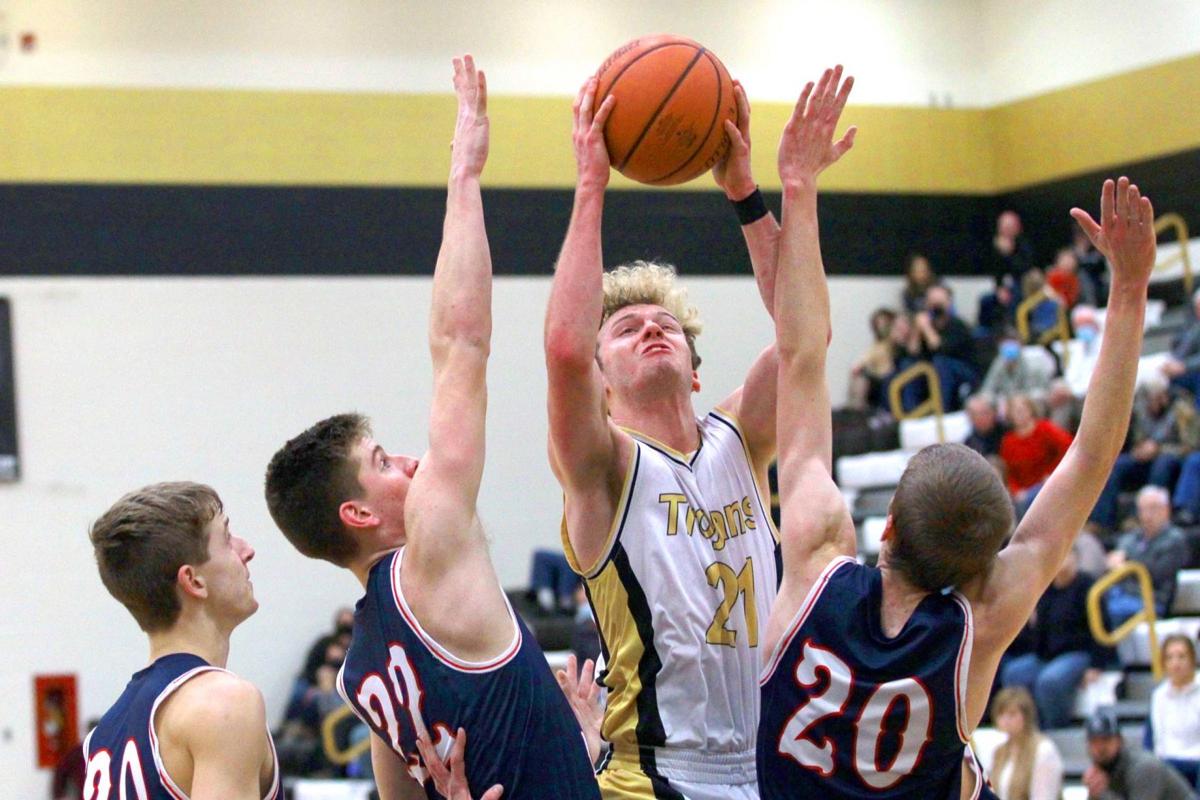 Logan Pinkerton of Covington shoots over a trio of Terre Haute North defenders.

Neil Ellmore of Covington shoots a short jumper against the defense of Colin Frank of Terre Haute North.

Logan Pinkerton of Covington shoots over a trio of Terre Haute North defenders.

When Covington hosted Terre Haute North on Friday night, it was the second time the 1A Trojans had faced a 4A school in boys’ basketball this season.

Unfortunately for the hosts, it was their second loss to such a school as McCutcheon had won 53-49 back in December and this time the Patriots took down Covington 51-50.

The game on Friday started out as a three-point shooting contest as the visitors opened the scoring with one, Alan Karrfalt of Covington responded with one, the Patriots hit another and then then the Logan Pinkerton of Trojans did the same for a 6-6 score with 4:10 left in the first quarter.

The two teams traded lay-ups and then did the same with three-pointers with Terre Haute North scoring first and then Calvin Springer, off a feed from Karrfalt, tied the game with his trey for an 11-11 score.

Pinkerton put Covington up by three on an old-fashioned “basket and one,” but the visitors made a basket before Neil Ellmore matched it, only to see the Patriots hit their fourth trey of the game to tie things a 16-16 going into quarter number two.

Terre Haute North scored twice to open a five-point lead on Covington with a lay-up and the fifth Patriot trey, but the Trojans tied things back up when Duncan Keller made two free throws and Pinkerton hit a three-pointer for a 21-all score with two minutes gone in the period.

The visitors then went on an 8-0 spurt in the next four minutes before Pinkerton scored on a fast break lay-up to stop the run at 29-23.

Springer would later hit the fifth Trojan trey of the night to pull Covington within three and then the two squads traded baskets for a 33-30 halftime score that favored the visitors.

“We didn’t execute as well as we should on defense,” Shaun Busick, the Covington head coach said about the play of his team in the first half. “We had too many breakdowns on defense that gave them open shots.”

Covington retook the lead as the third quarter started with Ellmore hitting a lay-up and Pinkerton converting another three-point play and later free throw for a 36-33 score, but the seventh trey of the night by the visitors tied the contest with 1:04 to go in the period.

Terre Haute North followed that with another three-pointer, but Karrfalt responded in kind to tie things at 39-all with 45 seconds left.

A basket, four second before the horn sounded, by Pinkerton put Covington up 41-39 going into the final quarter.

The visitors tied the game with two free throws that opened the fourth period, but Covington went back on top 43-41 with 6:09 left.

The next three minutes saw neither team score, but the Patriots did commit three fouls with the third one putting Pinkerton to the line from where he made one of two.

Terre Haute North called a timeout and set up a play that led to a quick two points to trail by one at the 3:09 mark.

The Trojans went to the line for a one-and-one, but missed the first one with the visitors rebounding and racing down the court to hit another three-pointer – their ninth of the game.

WESTFALL: Learn how to become a certified UAV pilot

As had seemingly been the case all night, Covington answered with a three of their own, this one by Karrfalt, to lead 47-46 with 1:14 left in the game.

The Patriots then scored their tenth and final trey of the contest to lead 49-47 with 39 seconds to go.

Covington went to the line with 22 seconds left, missed the front end of a one-and-one and the visitors got the rebound.

The Trojans, having committed only two fouls in the half, quickly fouled five more times to put the Patriots to the line with eight seconds left.

Terre Haute North fouled with 4.7, but the Trojans missed their second front end and the Patriots got the rebound.

Covington fouled with two seconds left, but this time the visitors made both free throws for a 51-47 score.

Pinkerton made the final basket of the game, the eighth trey for the Trojans, but that only pulled the team within on at 51-50 when the final horn sounded.

“That was a tough one,” was how Busick described the loss. “We defended better in the second half, but we didn’t make our free throws. In games like these, little things like that are the difference.”

Asked about playing a 4A school, Busick said only that he was proud of the effort by his team and that they would learn and move on.

He said the team learned three things on the night: 1) they can play with a taller team as the visitors were one to two inches taller at all positions, 2) it takes patience to get good looks and that his team got those against the Patriots, and 3) the Trojans can control the ball against such a team, noting that they had only six turnovers on the night.

One other thing did bite the team late in the contest and that was exhaustion as Terre Haute North was deeper.

“Yes, we need to add another player to our rotation,” Busick explained. “We need four guards and three bigs and right now we’ve only got six.”

On Saturday night, almost the exact same thing happed to Covington as they fell at South Vermillion by a 43-41 score.

Up 38-37 in the final 90 seconds, the seemingly tired Trojans missed from the line while the Wildcats made two three-pointers from the wing to lead 43-38 before Covington hit a last-second trey as they had against Terre Haute North to come up short by that 43-41 tally.