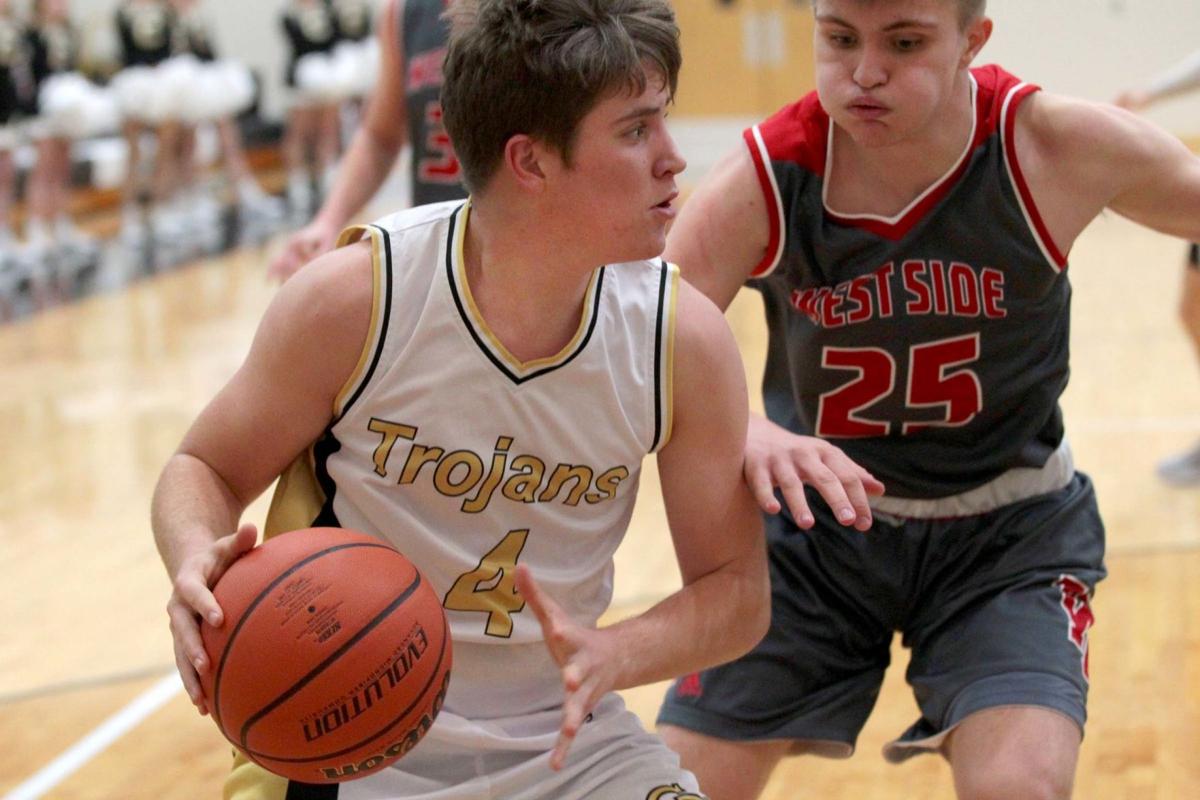 Neil Ellmore of Covington spins to the basket as Jordan Krintz of West Lafayette closes in. 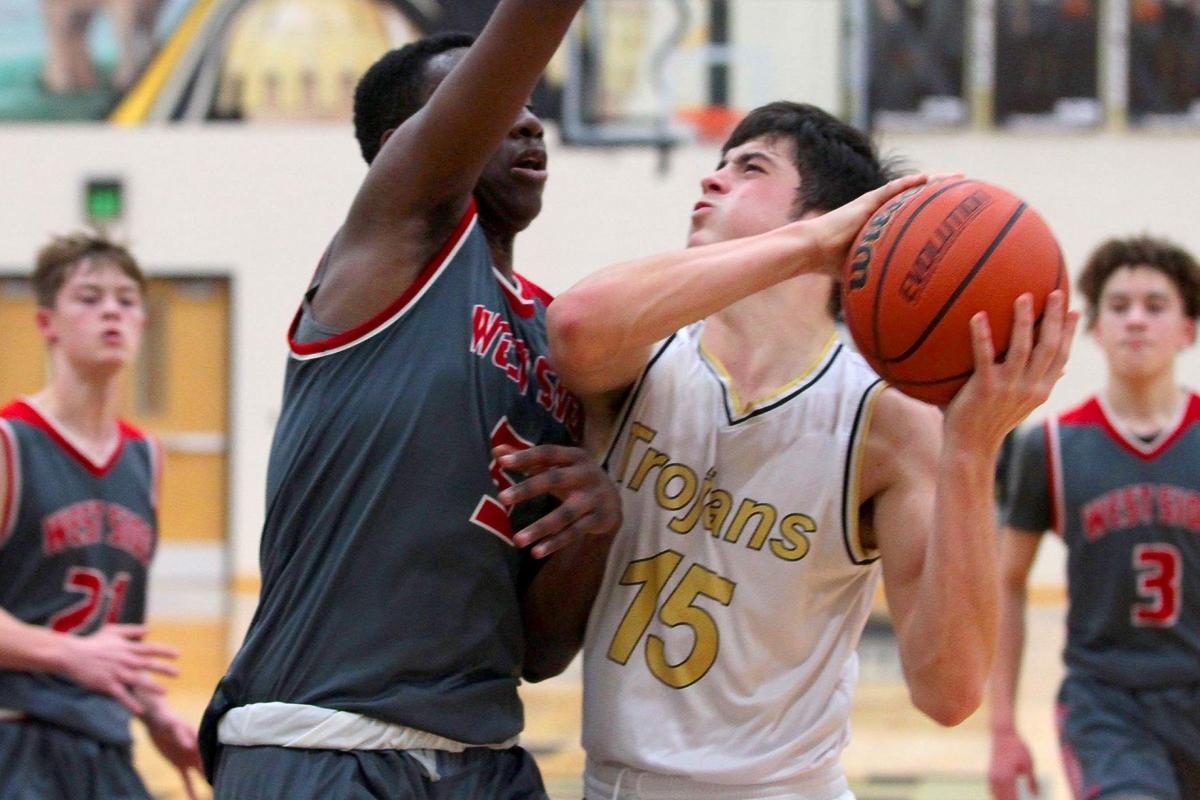 Duncan Keller of Covington goes up for a lay-up against Devine Adeyanju of West Lafayette. 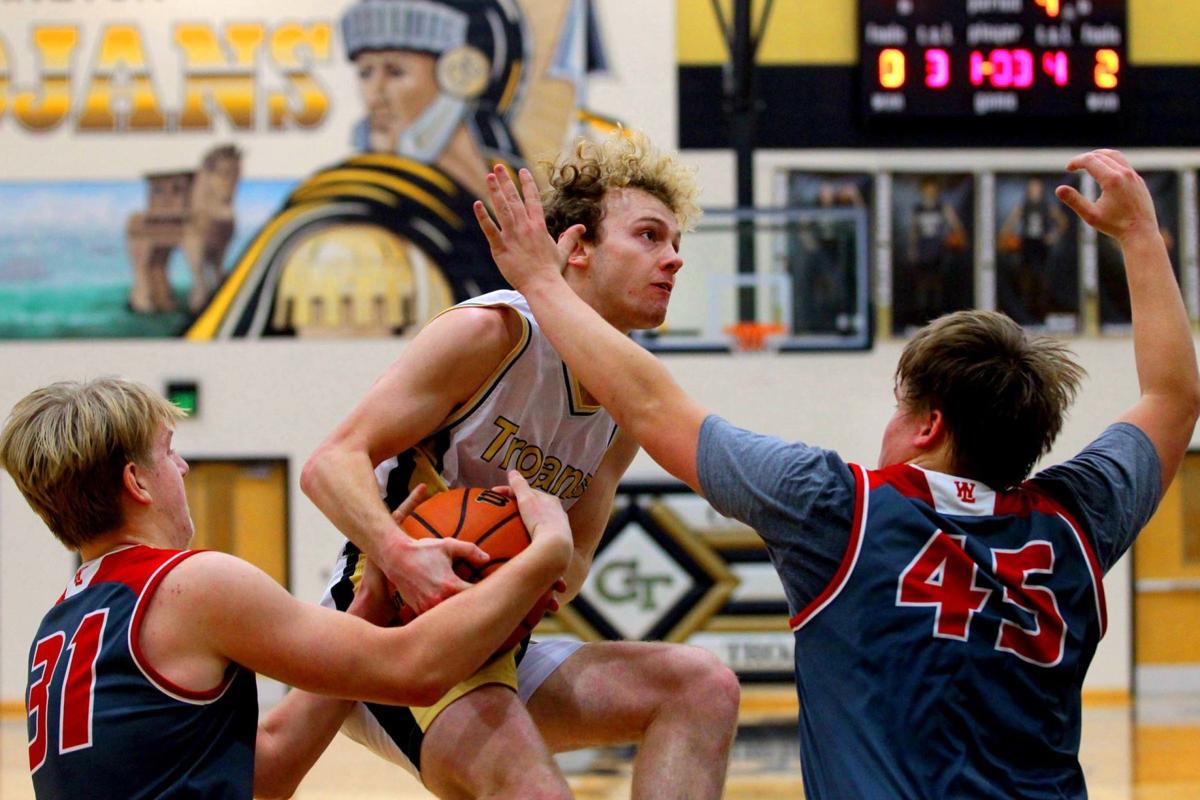 Logan Pinkerton of Covington tries to get past Sam Schott of West Lafayette who drew a foul and Colin Martin of the Red Devils.

Neil Ellmore of Covington spins to the basket as Jordan Krintz of West Lafayette closes in.

Duncan Keller of Covington goes up for a lay-up against Devine Adeyanju of West Lafayette.

Logan Pinkerton of Covington tries to get past Sam Schott of West Lafayette who drew a foul and Colin Martin of the Red Devils.

Covington hosted West Lafayette in boys’ basketball and came away with their first win over the Red Devils since the 2014-2015 season under former coach Kent Chezem.

In the previous five seasons, the Trojans lost six times with one of the games going into overtime and two being one-point losses.

Those contests often were noteworthy for the number of three-point shots made by each team and this year’s game started off as it would be more of the same.

Noted three-point shooter Braeden Shrewsberry opened the game with a trey for West Lafayette, but Savion Waddell scored six points, Neil Ellmore added another two and Logan Pinkerton knocked down a trey for an 11-3 Trojan lead before the Red Devils would score again – another three-pointer.

Ellmore then hit a jumper but a third West Lafayette trey would make it 13-9 after one period.

As the second quarter started, it looked as if Covington was going to pull away as Pinkerton and Duncan Keller both drove hard to the hoop for lay-ups that made the score 17-9 before the visitors would score their first two-point shot of the game – at the 6:10 mark.

That basket seemed to jump start West Lafayette and they went on a small 6-2 run.

After another Pinkerton basket, the Red Devils hit back-to-back treys and then a fast-break lay-up to take the lead at 23-21 at the half.

With several members of the Covington team having overcome Covid-19 and having played the previous night, that late spurt by the visitors might have been the players tiring, but Trojan head coach Shaun Busick denied that was the case.

“Nobody complained or used Covid as an excuse,” he said. “This is a tough team and we knew we had to maintain our toughness out there.”

The third quarter started with the teams trading three-pointers and then two-point baskets, but West Lafayette scored five in a row to lead 33-26 with just over three minutes gone in the period.

Two straight baskets by Ellmore pulled Covington within three, and after an exchange of baskets, Keller and Alan Karrfalt made consecutive treys to put the Trojans up one at 38-37.

A basket right before the horn gave West Lafayette a 39-38 lead going into the final period.

“Down eight in that period, I liked our work effort,” Busick stated. “We changed our offense to a man-to-man against their box-and-one on Pinkerton and we got back into it.”

Waddell started the fourth quarter with a three-point play that put Covington up two, but Shrewsberry answered with a trey for a one-point Red Devil lead.

A lay-up by the visitors put them up three, but Pinkerton answered with a runner and 90 seconds later with a three-point play to give the Trojans a 46-44 lead with 4:23 left in the game.

West Lafayette made a jumper to tie the contest and then the teams swapped basket for a 48-48 tie with 3:10 left.

Waddell and Pinkerton combined for the next six points in the game to put Covington up 54-48 with 40 seconds left.

A three-pointer by the Red Devils halved the lead with 25 seconds to go, but Keller made a pair of free throws for a 56-51 score with 16 seconds remaining.

West Lafayette made a basket but missed the ensuing free throw with 5 seconds left so Covington was still up three at 56-53.

Trying to trade free throws for baskets, the Red Devils fouled Keller who made both free throws in a double bonus situation that made the final score 58-53.

Retiring West Lafayette coach David Wood, who was denied his 360th career victory in his 27th season with the school, made several comments about the game.

“We didn’t shoot well – not like we usually do – credit Covington for some of that”, he explained. “Their zone forced us to take shots we didn’t like.”

He continued, “And maybe I pulled out of the box-and-one earlier than I should have done. We’re a young team and still learning. We wanted the ball in the high post, but when we got it there, we didn’t score as much as we should.”

In a game where one or two successful possessions were enough to determine the outcome, Wood said he was frustrated by “twice stealing the ball but giving it right back.”

Busick, who had only returned from his bout with Covid-19 three days earlier, said his team battled back due to the leadership of players like Waddell and Pinkerton with others starting to learn their roles on the team.

“They’ve played in a lot of big games,” he explained, “and they’ve learned toughness not only from past coaches but from the [reputation] of Covington basketball. The expectations here are high.”

The next scheduled game for Covington is Jan 15 when they should be hosting Parke Heritage.