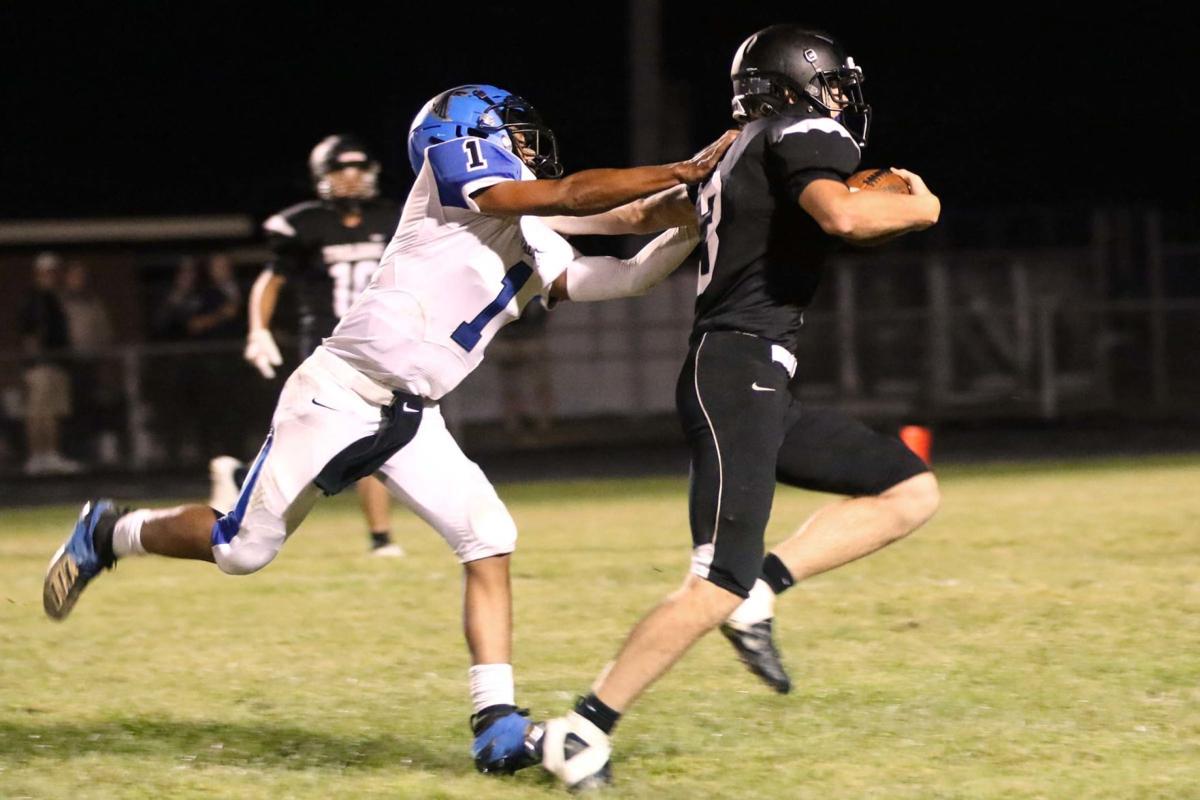 Eli Peaslee of North Vermillion tries to tackle Asa Hohenstein of Covington at the end of a 34-yard catch-and-run by the senior Trojan receiver. 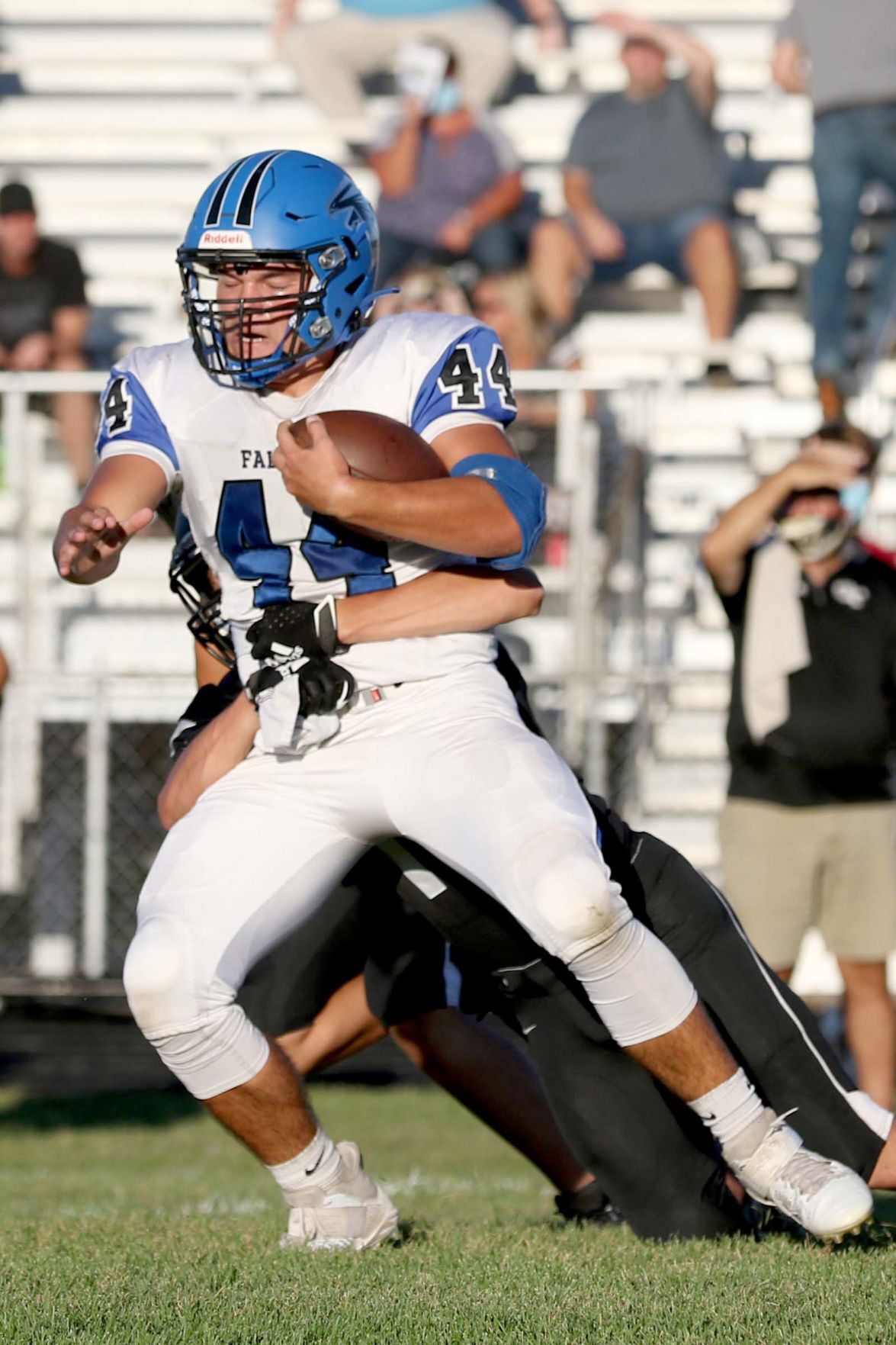 Carter Edney of North Vermillion carried for 159 yards against Covington. 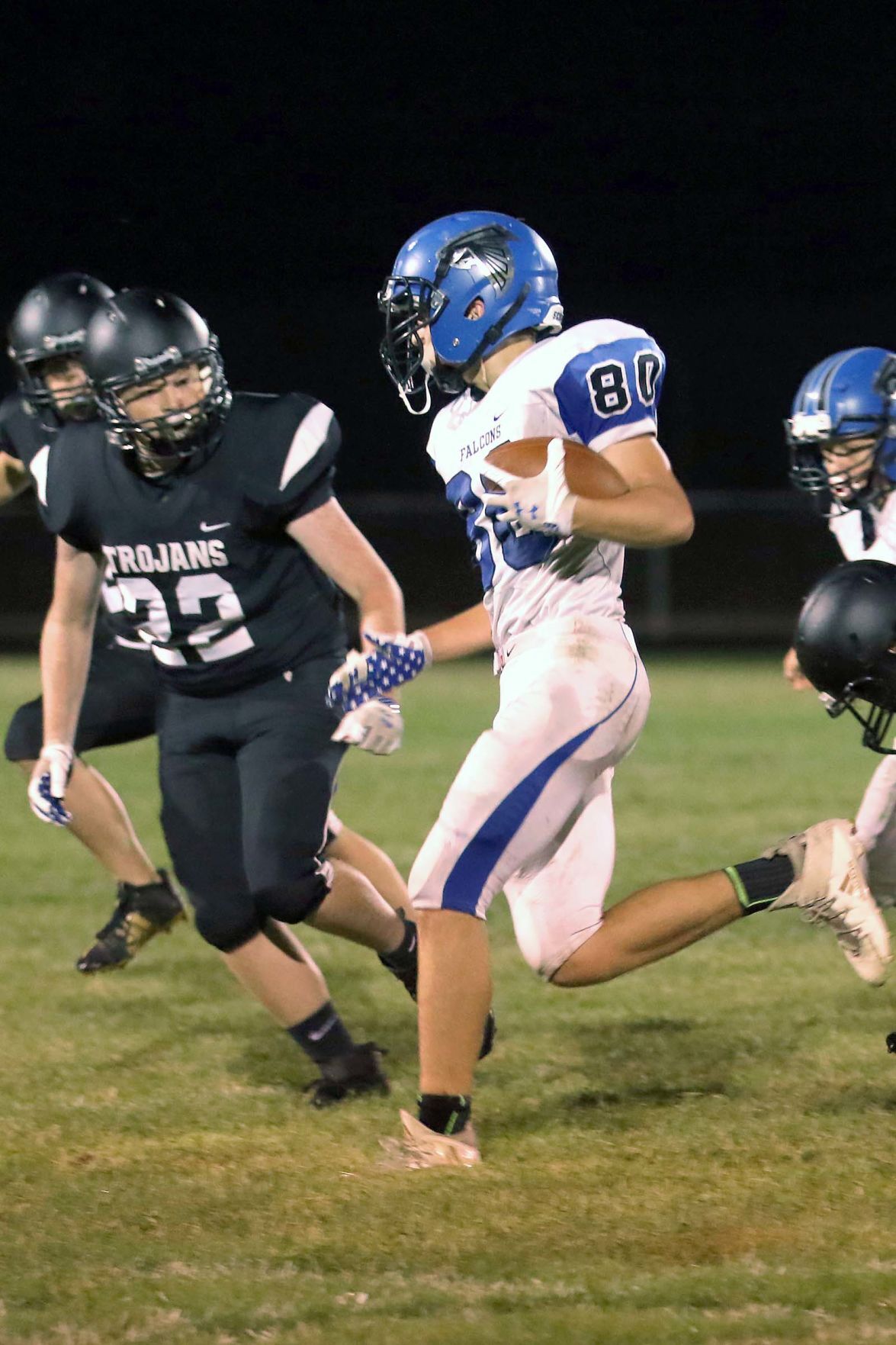 Owen Burns of North Vermillion tries to run past Conor Winn of Covington on this fourth-quarter carry. 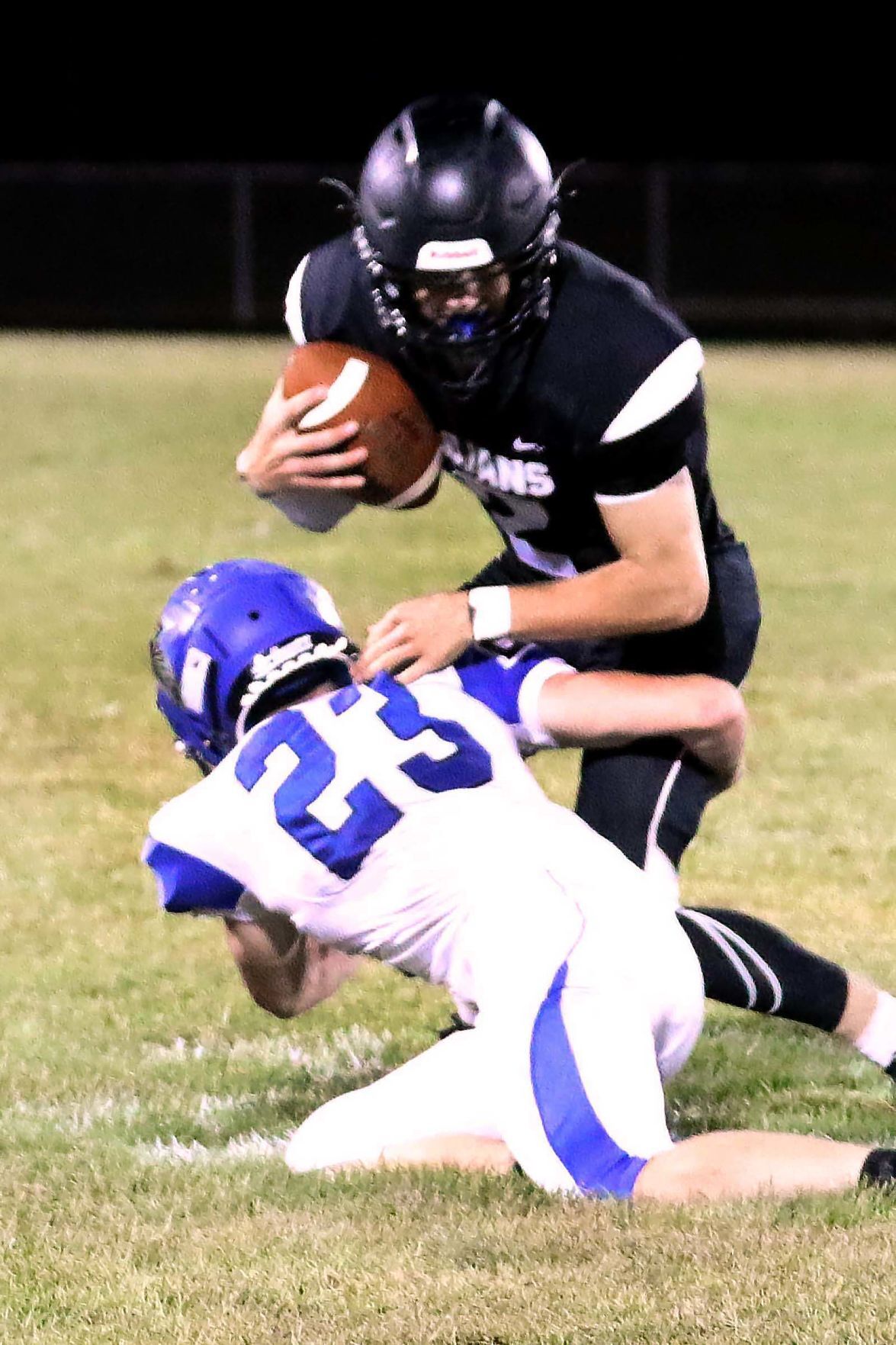 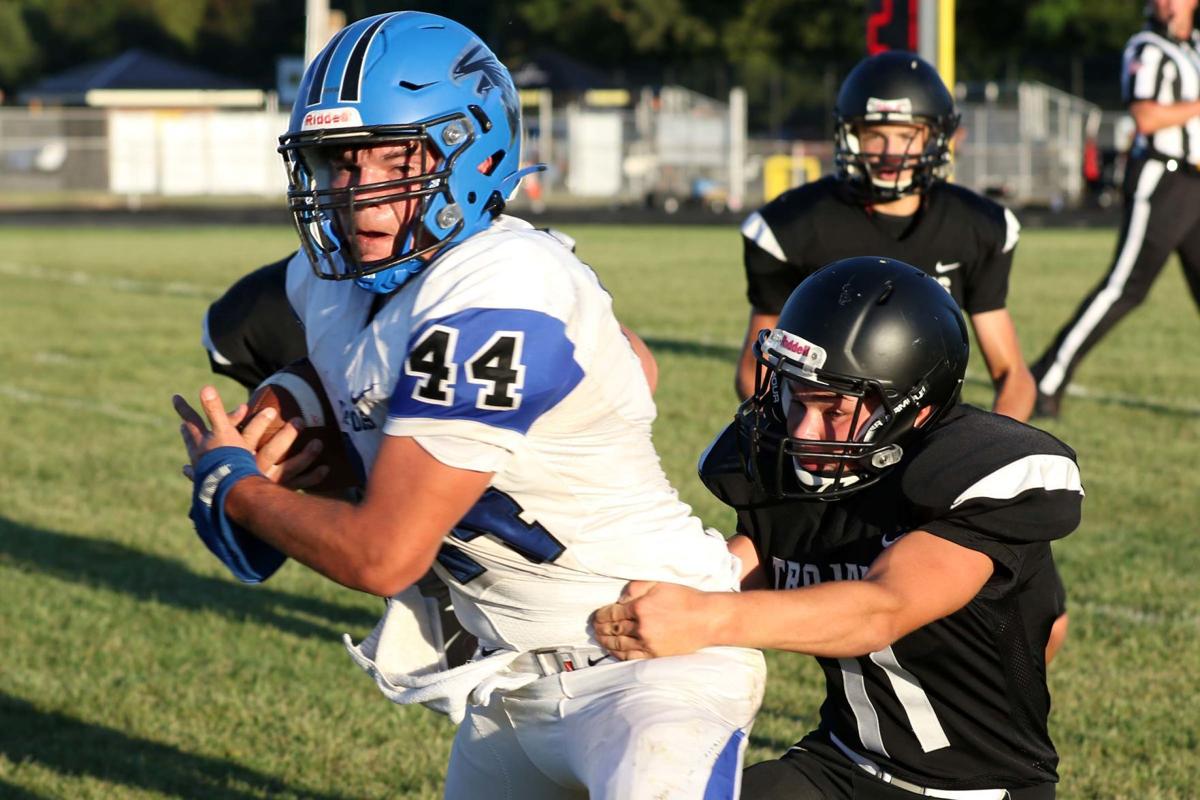 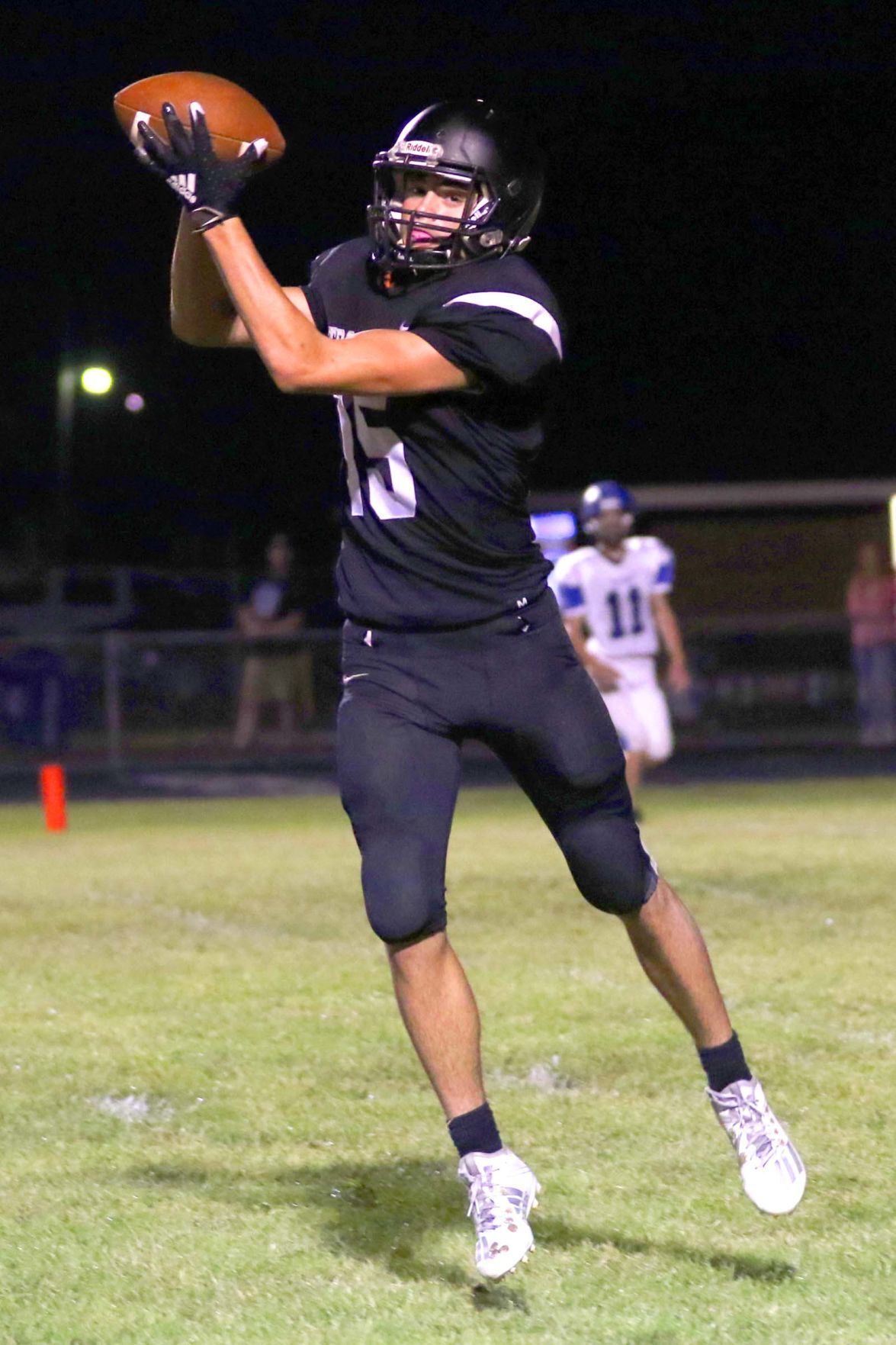 Duncan Keller of Covington makes leaping catch for a touchdown in the fourth quarter. 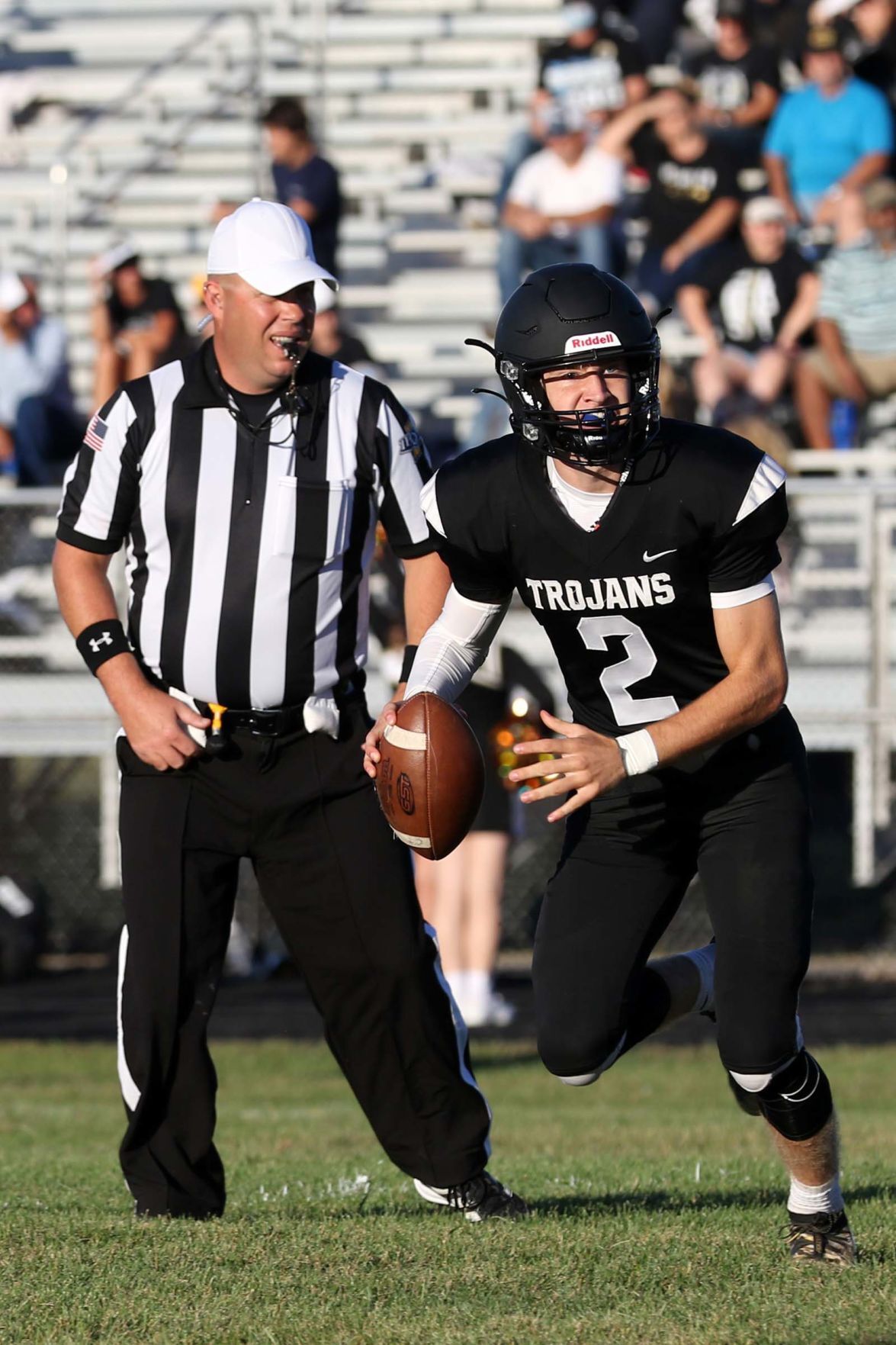 Alan Karrfalt of Covington ran for three touchdowns and threw for three more. 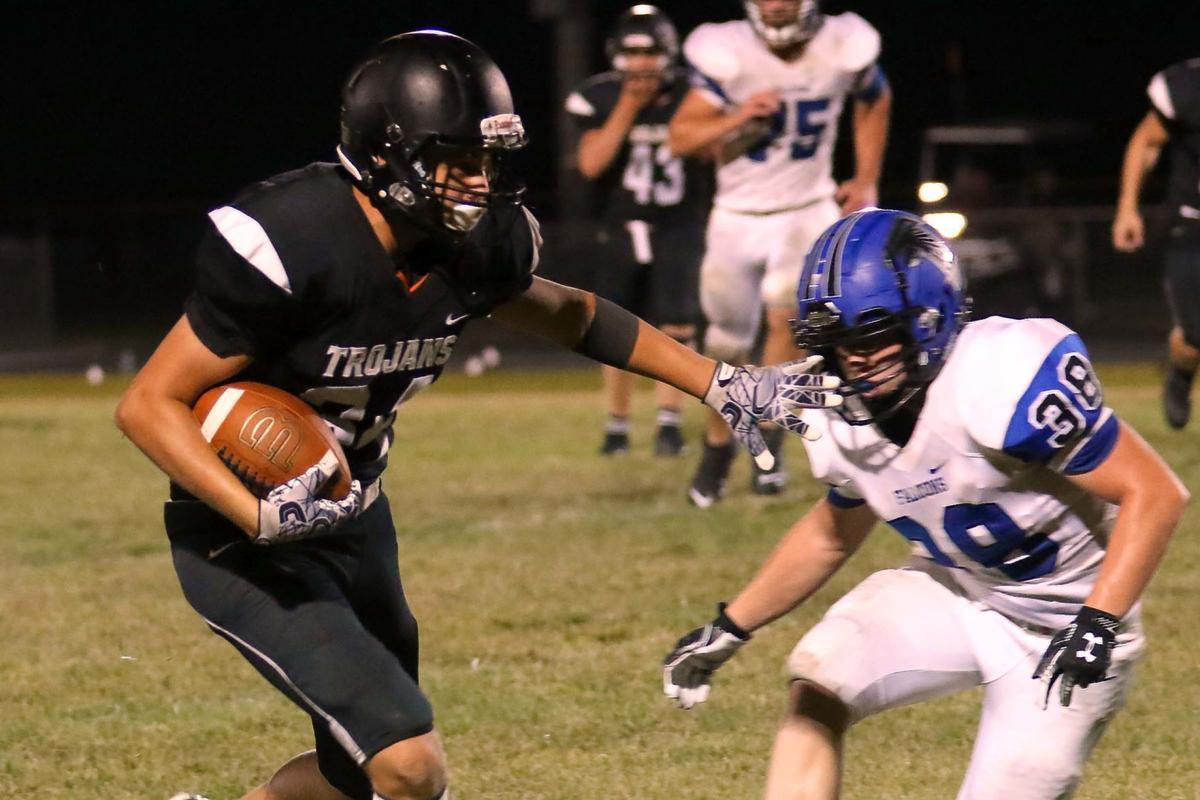 Eli Peaslee of North Vermillion tries to tackle Asa Hohenstein of Covington at the end of a 34-yard catch-and-run by the senior Trojan receiver.

Carter Edney of North Vermillion carried for 159 yards against Covington.

Owen Burns of North Vermillion tries to run past Conor Winn of Covington on this fourth-quarter carry.

Duncan Keller of Covington makes leaping catch for a touchdown in the fourth quarter.

Alan Karrfalt of Covington ran for three touchdowns and threw for three more.

Coaches often get too much blame in a loss and too little credit for a win, but the two mentors for the Covington and North Vermillion teams showed their value on Friday as the visiting Falcons fell to the Trojans by the score to 52-22.

Tyler Campbell, the new Covington coach, has brought a new offense to town and Friday, in the third week of the season, the Trojans had success in its execution.

“The kids bought into what we wanted them to do and they are finally getting some results from it,” he explained. “It’s hard to keep trying to do something when you are not succeeding in, but this team has kept at it and has kept getting better. The win tonight was big for us because it means we get a reward for doing that.”

On the other sideline, North Vermillion head coach Brian Crabtree has a squad that lost ten days of practice this fall and who still have several starters who cannot play due to having insufficient practices.

The veteran coach has had to cobble together a team from whomever is available – including three freshmen in the defensive backfield – and depend on the solid foundation he and his staff have built at the school to do the best they can.

There is no doubt that Crabtree has the team motivated, but their inexperience, lack of practice time and inability to do conditioning due to having to spend so much time teaching makes it tough going for the Falcons.

“It doesn’t matter whether we’re 15-0 or struggling, the values are the same,” he said in describing the North Vermillion program. “We call these life lessons. When life is tough, you get up and go to work and it will pay off down the road.”

Crabtree continued, “Right now we’re a couple of weeks behind. We’re working on fixing things in week three that we normally would have fixed in week one, but we’re getting better and we’re going to win some games this year.”

North Vermillion opened the game with the ball, but went three-and-out and punted.

Covington then drove 62 yards in five plays, keyed by an opening 41-yard pass and catch from quarterback Alan Karrfalt to Asa Hohenstein, to put six points on the board as the two-point try failed.

It was not until the second quarter that anyone scored again, and it was North Vermillion who put six points on the scoreboard after a 12-play drive capped off by a five-yard touchdown run by Carter Edney.

Last season, the only “misses” on extra points by McKenzie Crowder were against Covington when her line let defenders through to block two kicks and her bad luck against the Trojans continued when the snap on thi9s extra point try was off the mark and the kick never took place, leaving the score 6-6.

Covington came right back with a seven-play drive with Karrfalt connecting on passes to Hohenstein, Neil Ellmore and Dane Gerling before running the final nine yards to put the Trojans up 12-6 when the two-point try came up short.

North Vermillion responded by running Cody Tryon for ten yards and then having Edney keep the ball for four runs before he threw to Eli Peaslee for a 30-yard gain.

Edney then ran five more times, the last run being a four-yard carry for a touchdown that tied the game at 12-all.

He then threw to Brayden Schrader for a two-point conversion and a 14-12 lead with 3:08 left in the first half.

It was then that the Trojans broke the game open as they took a 20-14 lead on a 30-yard touchdown pass to Duncan Keller followed by a two-point pass to Trace Hammer with 34 seconds left.

The Falcons went to the air and the ploy backfired as Keller picked off a pass and ran it back for a touchdown as zeros hit the scoreboard.

Karrfalt made it 28-12 by throwing to Hohenstein on the two-point try.

“That was big,” Campbell said. “We didn’t have any turnovers today and getting that interception right before the half gave us confidence.”

After the intermission, Covington went on a 15-play drive that ate up almost half the third quarter to score another touchdown on a Karrfalt run and a two-point conversion on a toss to Keller for a 36-14 score.

Using one of the values taught by the coaches – never stop battling – the Falcons responded with an eleven-play drive finished off by a 10-yard touchdown run and two-point run by Edney for a 36-22 score with 40 second left in the third period.

Covington responded with another touchdown drive of their own for a 44-22 score and, after a Falcon punt, added another score on a 20-yard pass to Keller and a two-point toss to Evan Valdez for a 52-22 score that turned out to be the final.

Key statistics for Covington were 258 passing yards by Karrfalt to six receivers for three touchdowns and running for three more while North Vermillion saw Klayton Bailey lead the defense with seven tackles with Peaslee and Atticus Blank adding 3 ½ each and Edney running for 159 yards and 3 TDs.

Crabtree responded to the outcome by saying, “We going to go back to work on Monday and get better. That’s what we do – we work hard and get better.”

For Campbell, the biggest takeaway other than the win was that he said he saw his team settle down.

“We tell them don’t flinch and tonight they didn’t.”