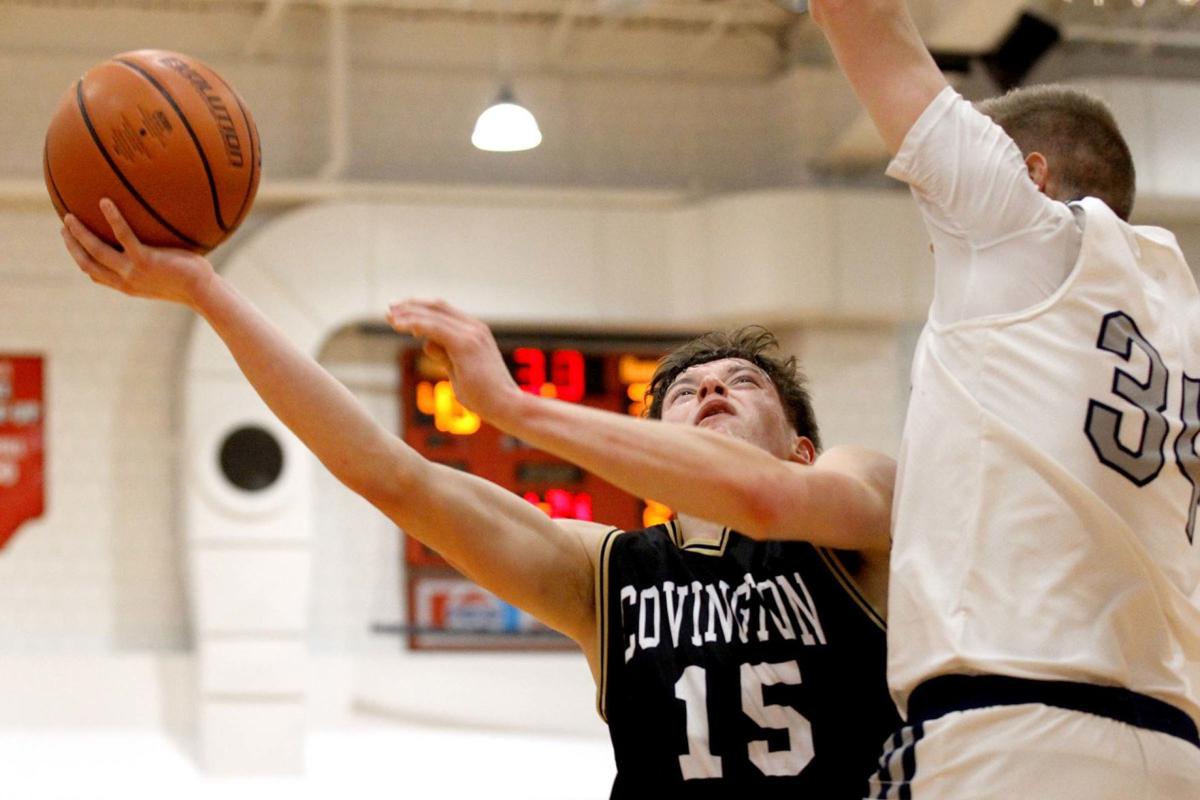 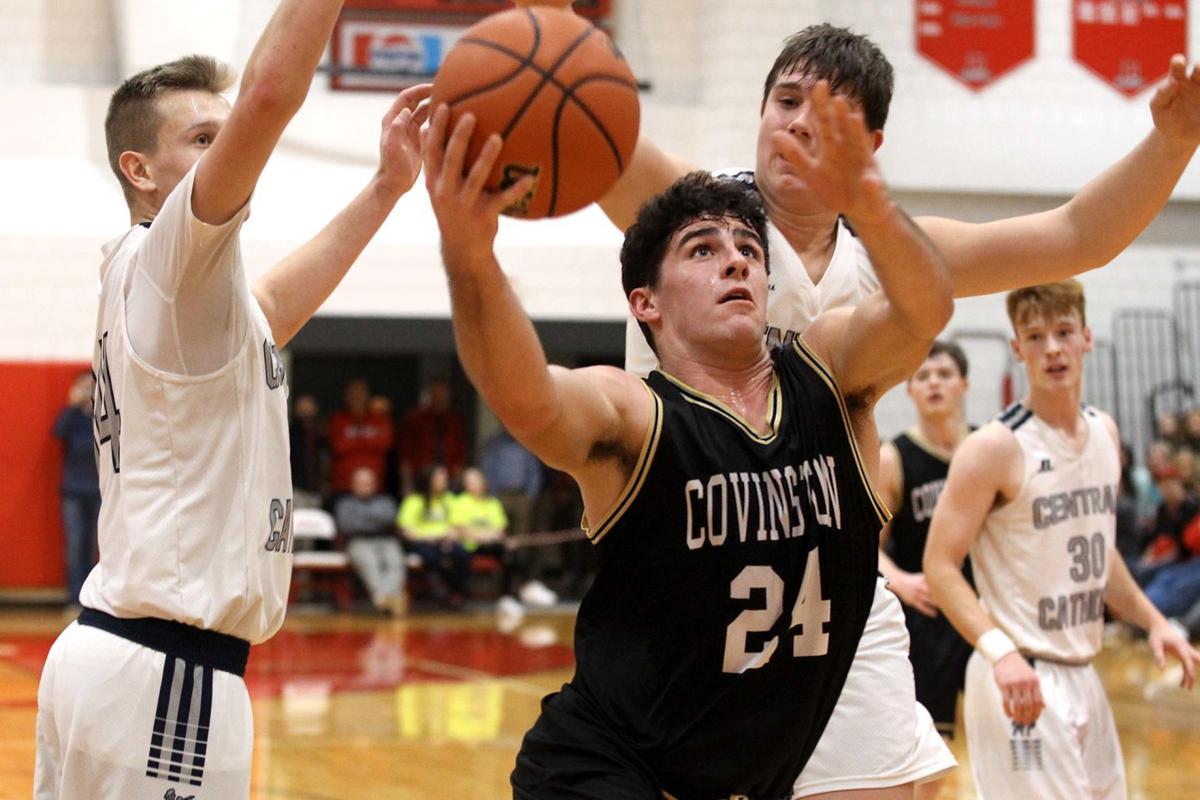 Caleb Ellmore of Covington gets past a pair of Lafayette Central Catholic defenders for two of his game-high 19 points. 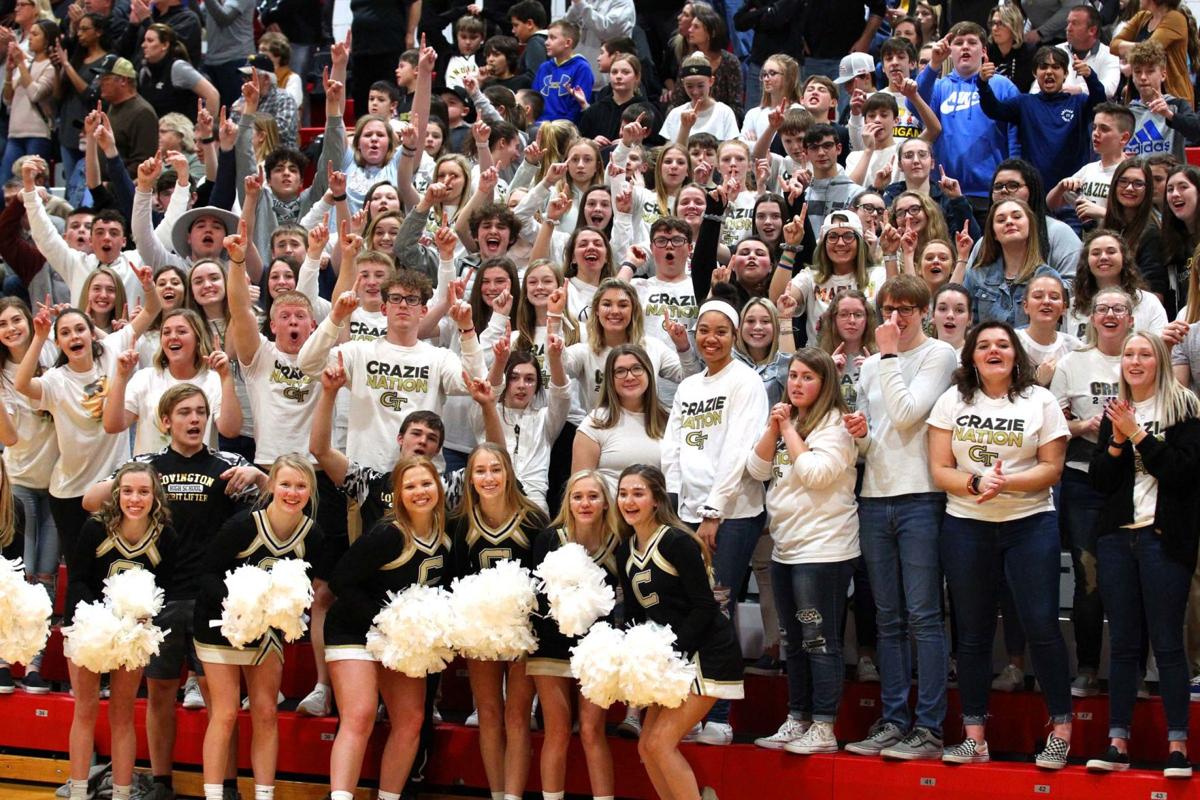 The Covington student pep block at the game with Lafayette Central Catholic.

Caleb Ellmore of Covington gets past a pair of Lafayette Central Catholic defenders for two of his game-high 19 points.

The Covington student pep block at the game with Lafayette Central Catholic.

Covington had faced Lafayette Central Catholic in boys’ basketball twice in the last 27 years and both of those contests were losses.

The two teams had not battled since 2015 until they did so this year in a preseason tournament at Lafayette Jefferson with the Trojans coming out on top 66-57.

While any win over the Knights is big, the Covington knew the meeting that would matter would be in the postseason where both schools would be playing in 1A Sectional 54 at Attica.

The Central Catholic sectional record in those 27 years was 58-6 with only one of those losses happening since the state went to class basketball in the 1997-98 season, after which they won three state 1A championships and 20 of the 22 available 1A sectional titles.

The two times Covington had faced the Knights, the Trojans saw great seasons come to an end.

Both years, the Trojans drew the Knights in the opening round of the sectional and lost, so it seemed like déjà vu when this year’s draw showed the two squads would square off in round one for a third time.

Asked if it were better to take on Central Catholic early or late in the sectional, Adam Ballard, the Covington coach, said he would prefer early.

“There’s advantages and disadvantages for both,” he explained, “but if you play them early, you’re fresh and you have time to prepare.”

The key player that Covington had to prepare to face was Carson Barrett, a 6-5 senior and son of 15-year Knight’s head coach David Barrett, who called his son “the best player I ever coached” and who accepted a preferred walk on position with Purdue where his father also played.

All season, Central Catholic would get the ball into Barrett who has a quick move to the basket, but if he were cut off, he would usually sling the ball across the court to an open shooter, usually for a three-point shot.

That would be the go-to attack used by the Knights for most of the game, but it was Covington that jumped on top first, taking a 5-0 lead on a short jumper by Caleb Ellmore and a trey from Alan Karrfalt.

Central Catholic responded, as expected, by feeding the ball to Barrett who scored six straight to put the Knights on top 6-5 and he would go on to score 10 of the first 12 points for his team.

Baskets by Ellmore, Logan Pinkerton and another trey from Karrfalt helped Covington take a 17-15 lead after one quarter.

A Karrfalt jumper pushed the lead to four as the second period started, but then the Knights began to use the inside-outside game with Barrett feeding his teammates, juniors Brenner Oliver and A J Bordenet, for three-pointers to take a 28-27 lead at the half.

Ballard said his team needed more scoring punch in the second half and he challenged the team and particularly Daniel Keller, an outside shooter who had only two points, to pick things up.

However, it was Central Catholic who found their shooting eyes in the third quarter as they ran off a basket and four three-pointers (including three by Bordenet) against only two buckets by Ellmore for a 42-33 lead with 3:16 left in the period.

Karrfalt made a jumper to cut the margin to seven, but the Knights made two lay-ups in a row to push their lead to 11 at 46-35 with 44 seconds remaining in the quarter.

A late burst by Covington on a lay-up by Savion Waddell and a putback by Colton Brown at the halftime horn swung the momentum toward the Trojans as they only trailed 46-39.

“We have to play better defense if we want to go far,” Ballard said about the failure to stop the “go inside and then shoot a three” play that Central Catholic used to build their lead.

The Knights opened the fourth period with a basket, but Keller stepped up to Ballard’s challenge and hit a pair of treys in the next 80 seconds to pull his team within three at 50-47.

With five minutes to go, Oliver made a basket for a 52-46 score and then, when they got the ball back, the Knights went into a spread offense, looking to chew up the clock while hunting only easy shots.

That plan backfired on Central Catholic according to their coach.

“We got lazy late,” Barrett explained. “We started to run the clock instead of trying to score. They made some big plays late and we didn’t and that was the difference in the game.”

Ellmore hit two short jumpers on the way to his game-high 19 points around a pair of free throw by Pinkerton to put Covington in the lead 53-52 with 2:05 left.

Central Catholic made a trey but Keller matched it with his third of the quarter for a 56-55 lead with 1:20 on the clock and then the Trojan defense took over – making the big plays Barrett spoke about.

Covington forced a turnover and Ellmore threw a court-long pass to a streaking Brown for an easy lay-up to make it 58-55.

The Knights began to foul as soon as a Trojan touched the ball in order to get Covington into the bonus where they would have to shoot free throws.

It worked at first as Covington missed a one-and-one with 23 seconds left, but the Trojans forced another steal and got the ball back leading to more free throws – these made – to ice the game at 60-55 as the Covington defense did not allow a score by the Knights in the final 1:39 of the contest.

Other than the defensive struggles against the inside-outside attack by Central Catholic in the first three quarters, Ballard said he liked much of what he saw.

“We need to work on getting better defensively,” he said, “but we did a lot of things the best we’ve done all year.”

Ballard closed by saying his team “had guys step up and contribute” and that his seniors would keep the players focused on the job ahead and not think the sectional was over.

“This group of seniors had been here before,” he said about playing in a sectional. “They weren’t expected to win, but they did, so they know a team has to be ready to play.”