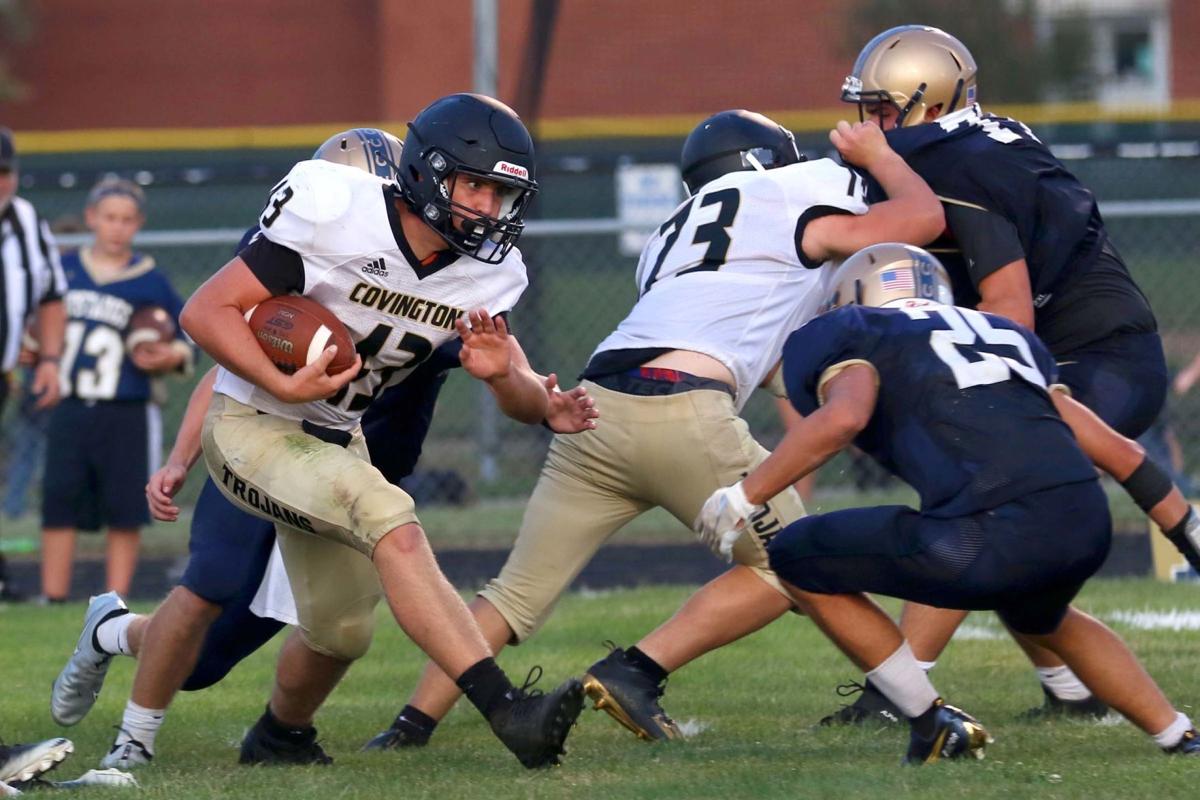 Neil Ellmore of Covington follows a block by Austin Croucher (73) for a gain of five yards before Layne Lynch (25) of Fountain Central closes in. 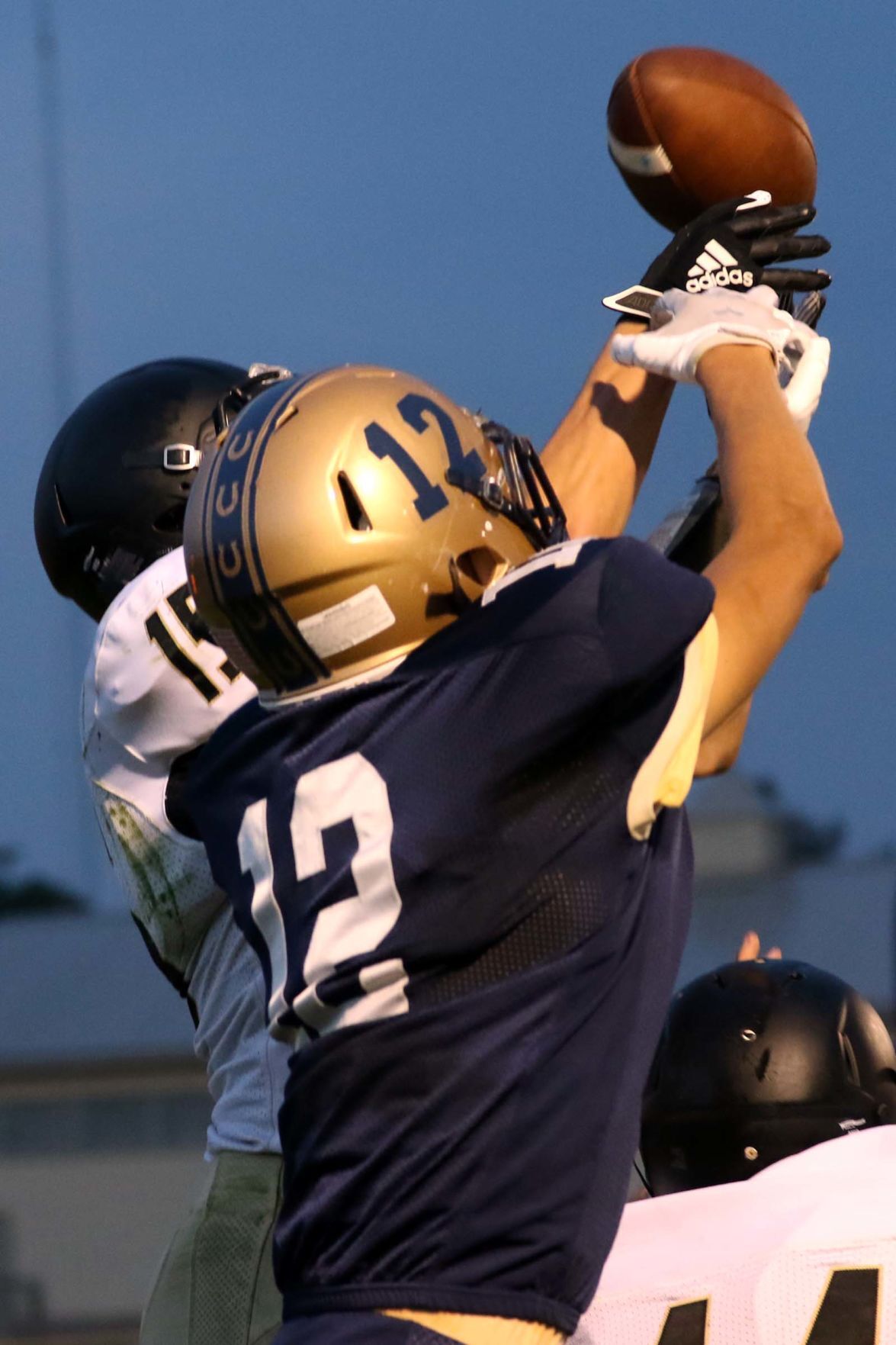 Duncan Keller (15) of Covington breaks up a pass in the end zone aimed at Isaac Gayler (12) of Fountain Central. 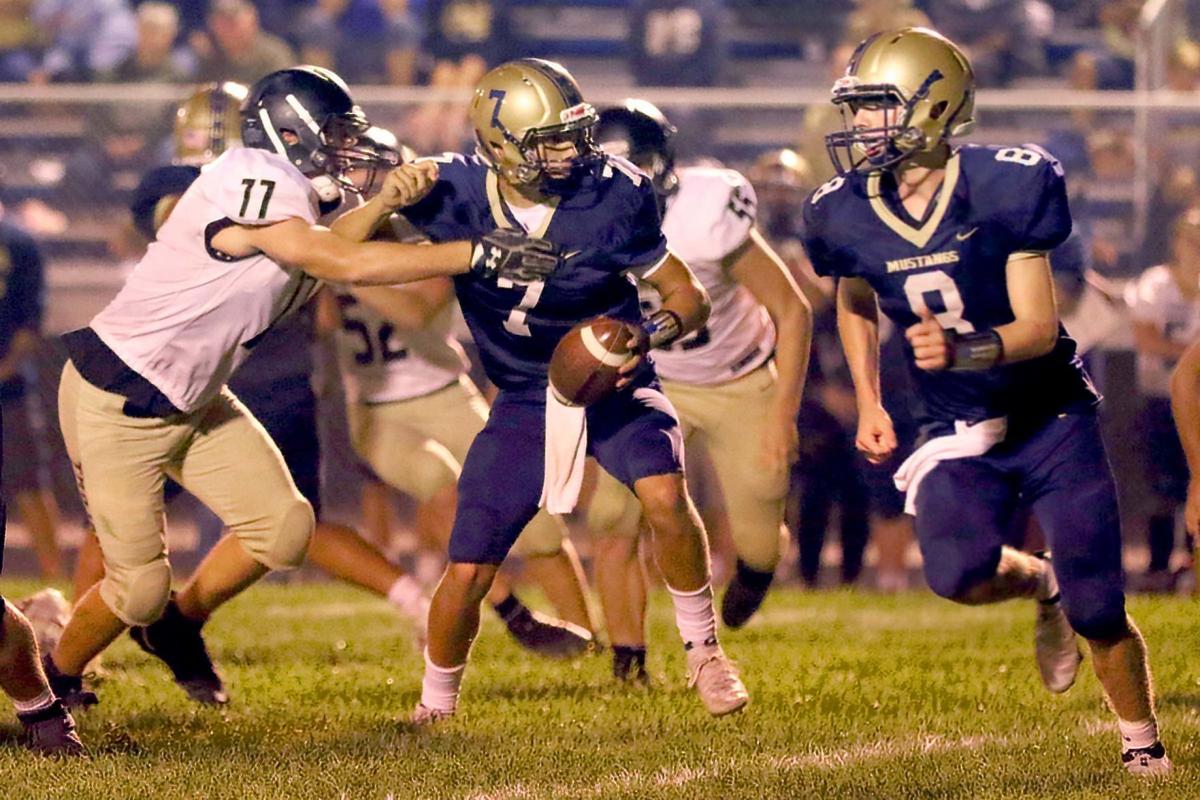 Brice LaMeau (77) of Covington gets to Fountain Central quarterback Seth Gayler (7) just as he starts to pitch the ball to Austin Pickett (8). 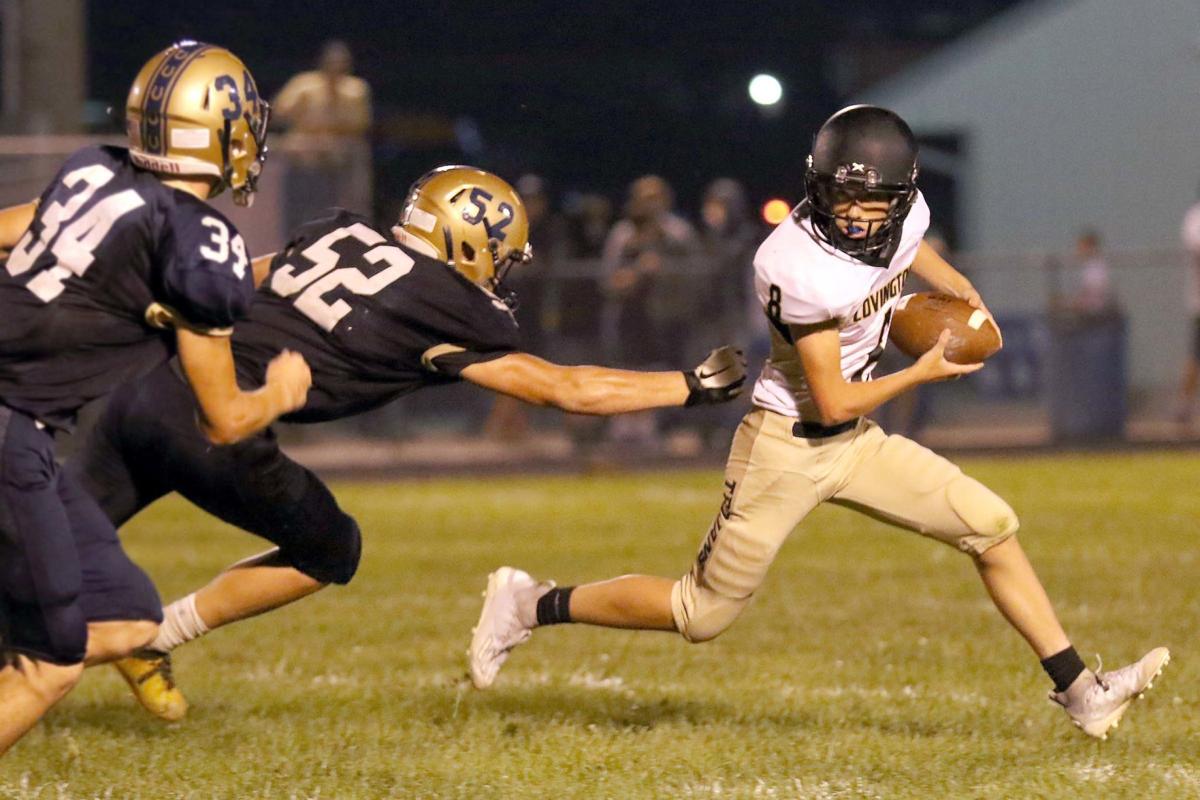 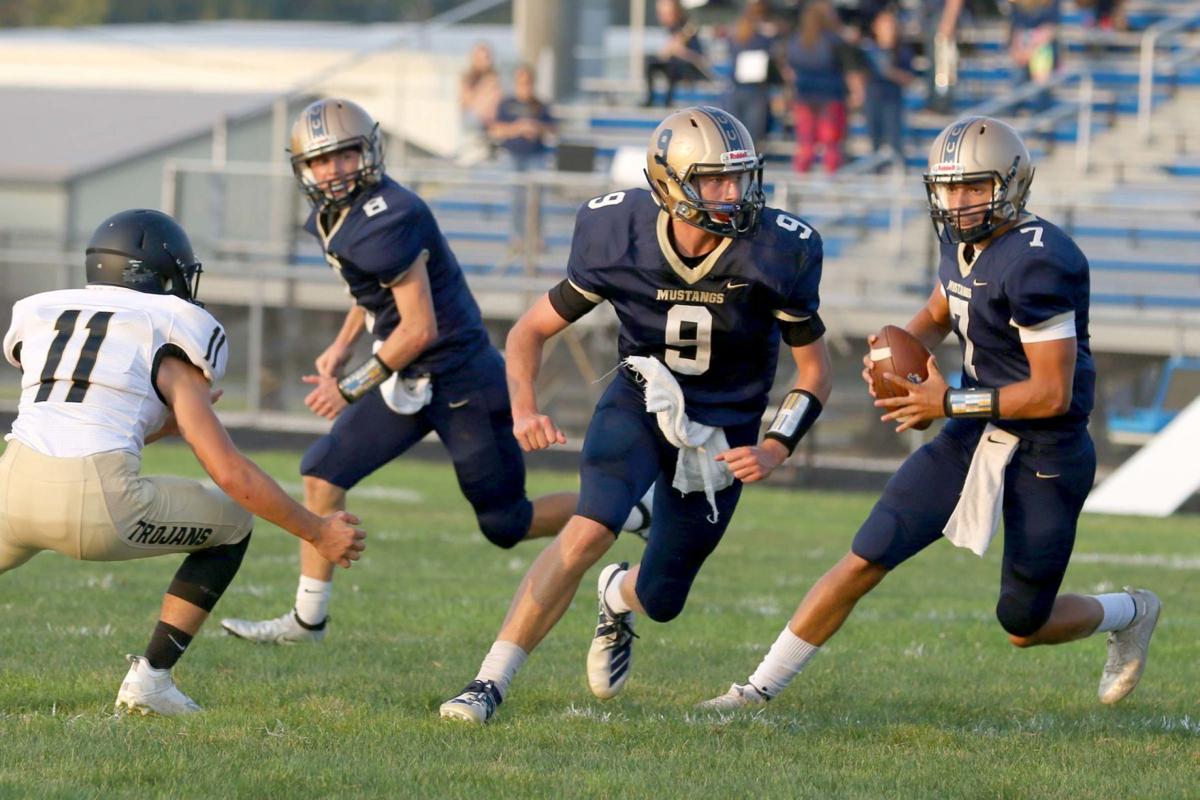 Neil Ellmore of Covington follows a block by Austin Croucher (73) for a gain of five yards before Layne Lynch (25) of Fountain Central closes in.

Duncan Keller (15) of Covington breaks up a pass in the end zone aimed at Isaac Gayler (12) of Fountain Central.

Brice LaMeau (77) of Covington gets to Fountain Central quarterback Seth Gayler (7) just as he starts to pitch the ball to Austin Pickett (8).

Fountain Central hosted Covington in football on Friday night with it being only the second game of the season for the Mustangs against the fourth for the Trojans.

For most of the first half, that discrepancy mattered little as was Fountain Central who scored first in the contest after unsuccessful drives by both teams.

On their first possessions, both teams moved the ball but turned it over to the opponent on downs.

Covington looked to be driving on their second series, but a lineman’s dream happened to Imanol Barradas of Fountain Central who reached up and snatched an Alan Karrfalt pass out of the air at the line of scrimmage for a drive-ending interception.

Getting the ball on the Trojan 45, it took the Mustangs only seven plays to score with Austin Pickett running the final three yards to the goal line after which the hosts ran a fake field goal play with AJ Hall carrying for the two-point conversion and an 8-0 lead with 1:13 left in the first quarter.

The visitors looked to answer primarily by going to the air with Karrfalt throwing to Asa Hohenstein, Duncan Keller and Neil Ellmore with the latter making a 7-yard catch for a touchdown on the thirteenth play of drive.

Karrfalt ran for the two-point conversion that tied the game at 8-all just two minutes into the second quarter.

Fountain Central had no answer on their next drive, punted and Covington responded with another score, this one an 81-yard pass to Dane Gerling that made it 14-8 when the two-point try failed.

There were a little over six minutes left in the half when the Mustangs got the ball back and they began to drive down the field using runs by Pickett, Owen Acton and quarterback Seth Gayler who also threw to Isaac Gayler.

The hosts reached the Trojan seven before a fourth-down pass fell incomplete to give the ball back to Covington with a half-second left in the quarter meaning the visitors were up 14-8 at the intermission.

Fountain Central got the ball to start the third quarter and promptly tied the game again on a nine-play drive that saw Acton score from three yards out.

Covington ran off fourteen plays on their first possession of the second half, but came up a yard short on a fourth-down play at the Mustang 17.

Fountain Central went three-and-out, punting the ball to their own 35 which is when the game changed in favor of the visitors.

The Trojans took one play to score, a 35-yard touchdown run by Gerling and a two-point pass to Evan Valdez for a 22-14 lead.

On the ensuing possession, the Mustangs drove to the Trojan nine from where they went to the air and saw Gerling pick off the pass in the end zone and run it out to the 30.

After three straight penalties to start their next possession, Covington overcame them with a pass to Keller for a 32-yard gain.

Karrfalt then ran for 16 yards and then he went to air, hitting Ellmore, Keller and Hohenstein on successive plays.

Jordan Melvin of the Mustangs then stopped Karrfalt short of the line on the two-point play.

A mishandled ball on the kickoff that followed allowed Jordan Inman to recover the ball for Covington and the Trojans used the same hurry-up offense they had run all night to score again with Ellmore getting the touchdown for a 34-14 tally.

Ellmore came up big on the next play as he picked off a Mustang pass to give the ball back to Covington who promptly scored again on a 27-yard pass to Keller.

After a pass from Karrfalt to Hohenstein was good for two points, the score was 44-14 and that became the final when neither team was able to score again in the final six minutes of the contest.

Fountain Central coach Ryan Hall said his team played well the previous week and in the first half of this one, “but then the wheels fell off.”

He said he was disappointed in getting the ball inside the five (actually the ten) three times and not scoring.

Hall said his defense needed more work, commenting that Covington could pass at will, but he did have kind works for his running backs, Acton and Pickett, saying they ran hard all game.

Covington coach Tyler Campbell thought he knew the reason that Hall thought the wheels came off, saying, “We spend every practice playing fast. I think by the second half, they had no legs left.”

He praised the defense, particularly for stopping the Mustangs near the goal line, give credit to the defensive ends for squeezing in to keep the hosts contained.

Hall also like the play of Karrfalt on offense, saying the junior quarterback made some good decisions at quarterback in throw for over 400 yards, and he complemented Keller for his receiving and play at defensive back.

This Friday, Covington will host Seeger while Fountain Central is schedule to go to Attica.