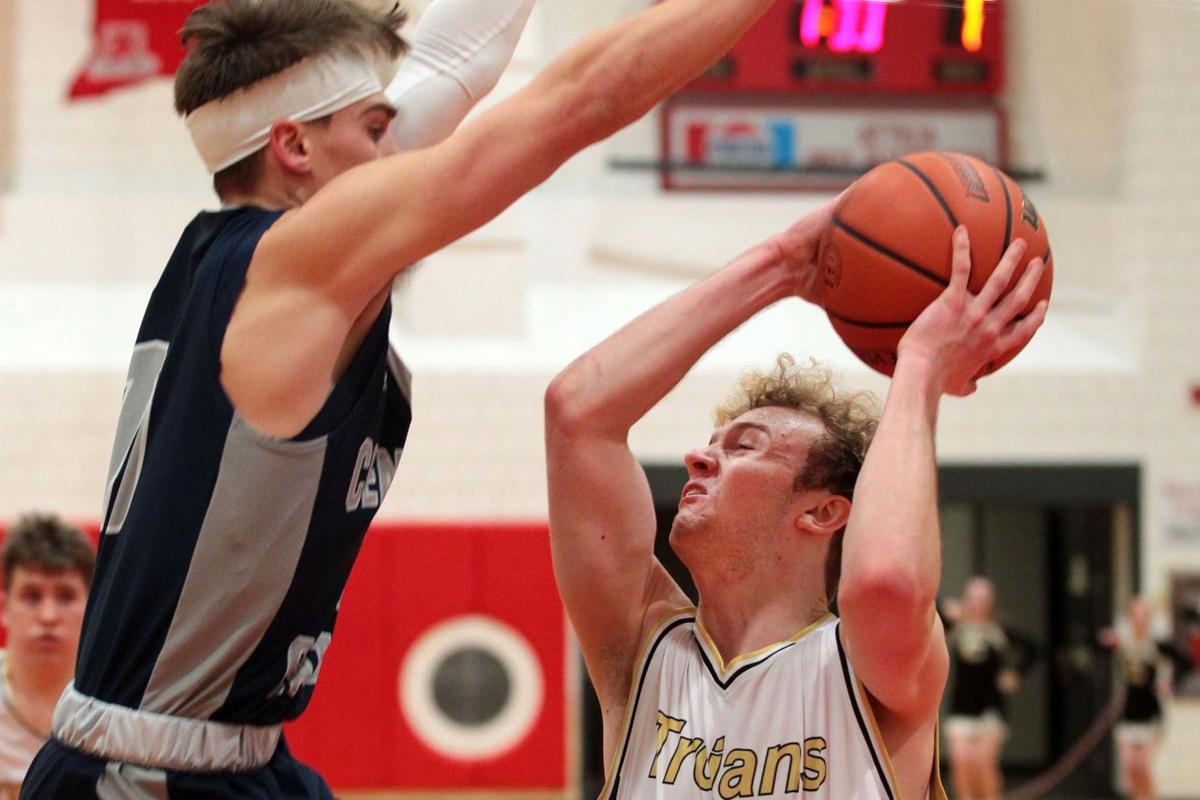 Despite having to battle defensive pressure all night such as this by Brenner Oliver of Lafayette Central Catholic, Logan Pinkerton of Covington scored a game-high 30 points. 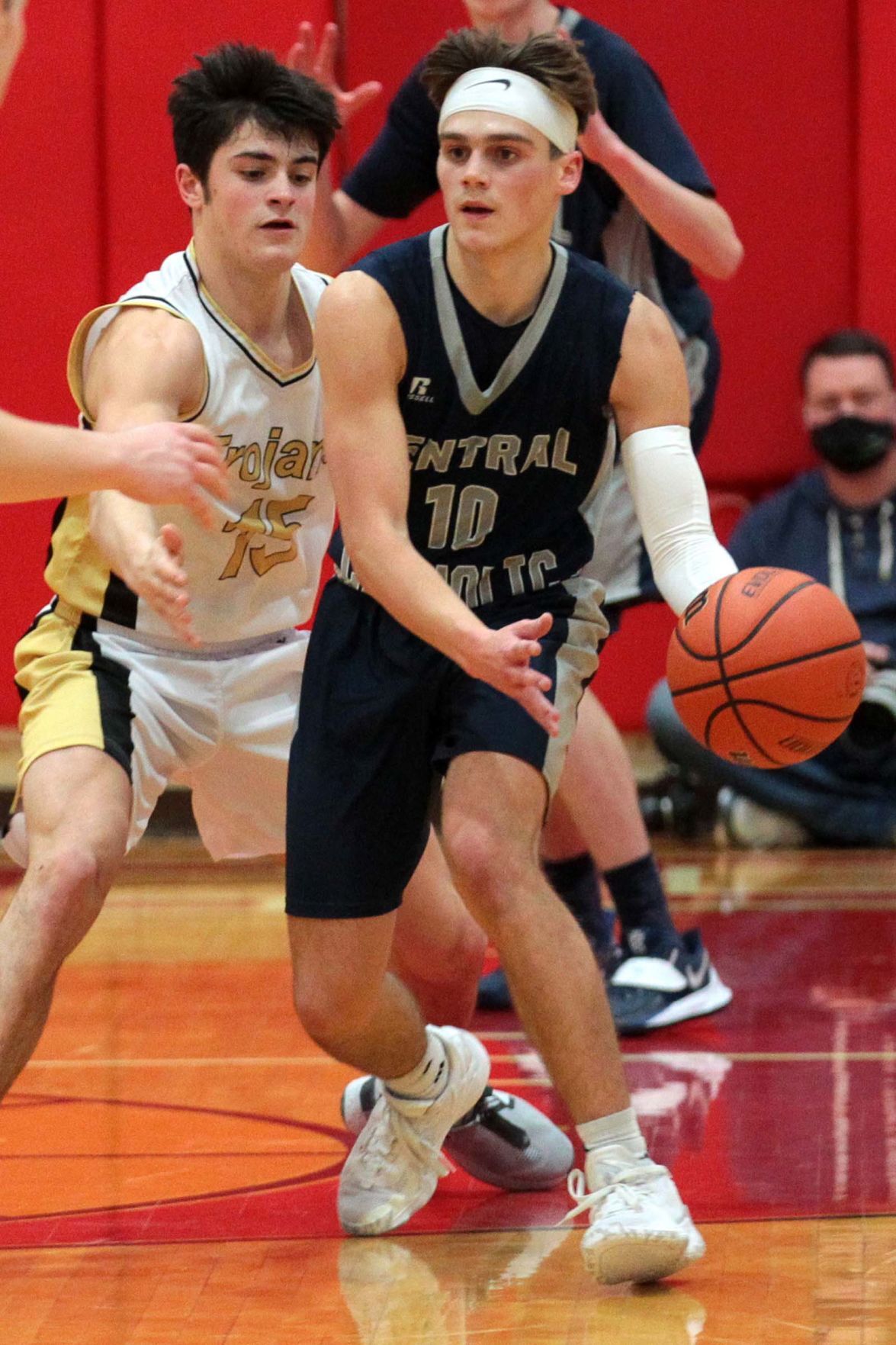 Duncan Keller of Covington forces Brenner Oliver of Lafayette Central Catholic to pass away from the basket.

Despite having to battle defensive pressure all night such as this by Brenner Oliver of Lafayette Central Catholic, Logan Pinkerton of Covington scored a game-high 30 points.

Duncan Keller of Covington forces Brenner Oliver of Lafayette Central Catholic to pass away from the basket.

In the Covid-19-shorted 2019-20 boys’ basketball season, Covington had defeated Lafayette Central Catholic twice, 66-57 and 60-55, with the latter result coming in the 1A Sectional 54 opener.

So, it came as no surprise that the fans of the Knights were on hand in force when their squad faced the Trojans in this season’s sectional championship game, exchanging chants and yells with the usual sizeable, boisterous Covington contingent.

In the first two minutes of the game, no one scored as both teams missed opportunities they would normally make – not unusual in a championship contest.

Logan Pinkerton hit a driving lay-up for the first Covington points, but moments later the Knights tied the contest and then took the lead on a pair of baskets by Clark Barrett, son of Lafayette Central Catholic coach Dave Barrett.

Neil Ellmore fed Duncan Keller for a lay-up that re-tied the game, but the Knights scored five in a row including the first of three treys in the first quarter to go up 9-4.

Alan Karrfalt and Pinkerton knocked down shots to put the Trojans within a single point, but the Knights scored eight in a row, including two treys, before Isaiah Edwards took a pass from Pinkerton for a lay-up that made it 17-10 after one quarter.

The next quarter saw Covington continue to miss open shots as they had in the first quarter, but hustle plays on defense by Ellmore, Keller, Drew Busick and Calvin Springer disrupted the Knights’ offense whenever possible.

Despite the steals and deflections, Lafayette Central Catholic scored seven points in a row to open the second period and it was not until the 3:59 mark that Pinkerton was able to convert a three-point play to stop the run and make the score 24-13.

A Trojan basket and a trey from Karrfalt only cut into the margin by two and then the Knights scored five of the last seven points in the period to lead 32-20 at the halftime intermission.

Ellmore opened the third quarter with a free throw, but Lafayette Central Catholic came right back, outscoring Covington 7-5 before a lay-up by Ellmore pulled the Trojans within eleven at 39-28 – the closest they would get for the remainder of the game.

The Knights made back-to-back treys, but Covington responded by doing the same as Pinkerton and Springer hit from beyond the arc, before a final Knight basket made it 48-34 going into the final period.

Pinkerton continued to attack the basket whenever he had an opportunity and he started the fourth quarter with a pair of free throws after one such drive.

The lone senior on the Covington team would go on to score 30 points on the night, but he was also the focal point of the Knights’ defense as they double- or even triple-teamed him whenever he touched the ball inside the three-point arc.

Realizing this, Pinkerton began to shoot at times from three-point range and he made three treys in the final period, but it was not enough as the Knights pulled away for a 67-49 win to earn their first sectional title since 2018-19 and stopping the Covington string of consecutive sectional crowns at five.

Busick said his team simply met a better team on the night, saying that the Knights had played an excellent game on both ends of the court, explaining, “They were unbelievable in shooting the ball, but that came from good feet and good passes.”

He later added that the Knights are potentially a state-championship level squad.

Talking about his own team, Busick said, “We were a step slow on the catch. Their inside-out caused us to struggle in doubling down. With big guys 5-6 inches taller than us, they’d get the ball inside and we’d react, but we couldn’t get back outside to stop that shot.”

Turning to his lone senior, Busick said, “We’re sorry to lose a player like Logan [Pinkerton]. You don’t get to see many players like that in a career.”

With the win, Lafayette Central Catholic advances to play Cowan in the Frankfort Regional while Covington ends the season with a record of 11-7.