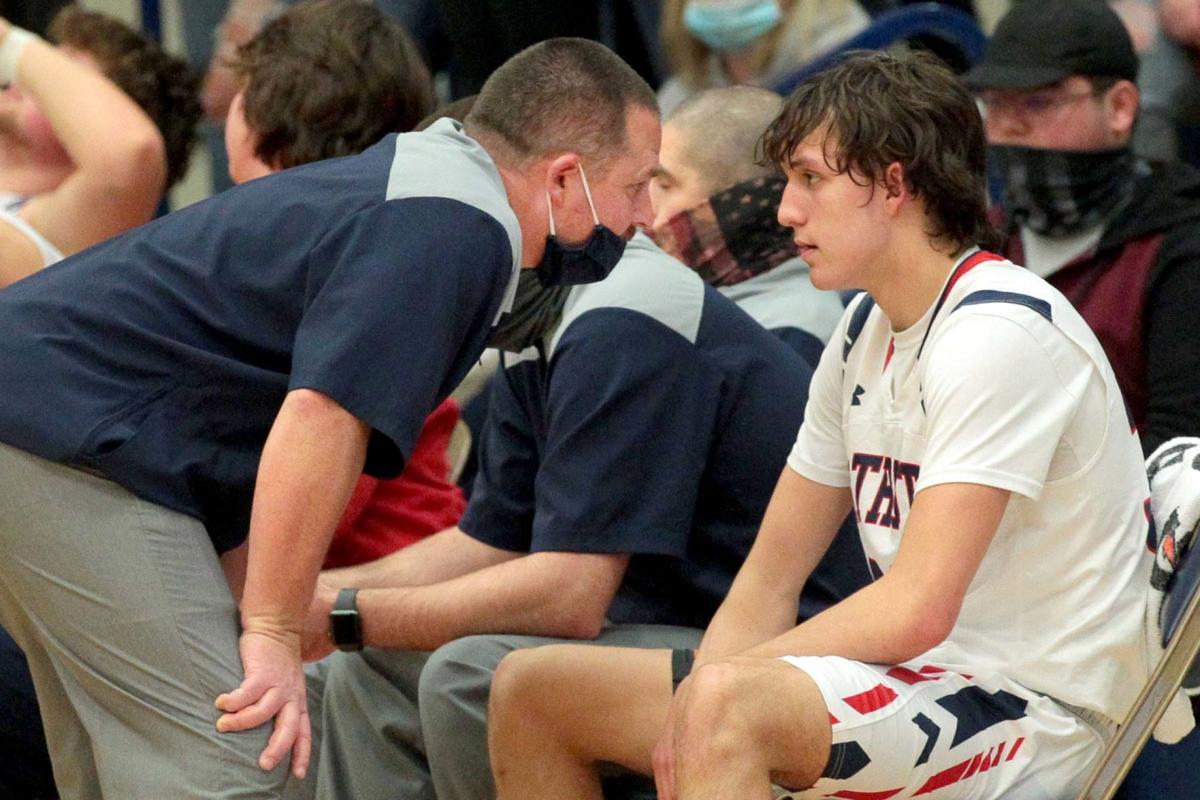 Seeger head coach John Collins talks to Owen Snedeker after the latter came out of the game in the third quarter. 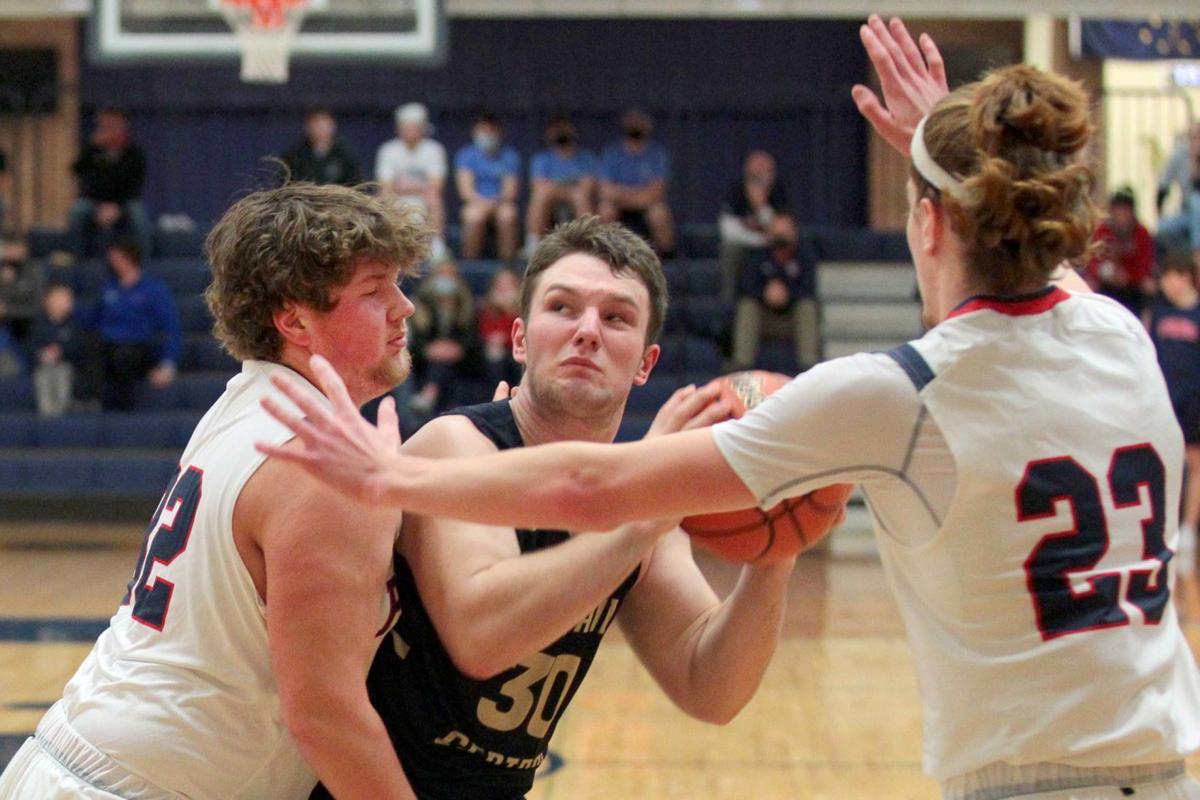 (Left) Looking to shoot, Cole Kirkpatrick of Fountain Central is doubled teamed by Elijah Greene and Kolton Pearson of Seeger. 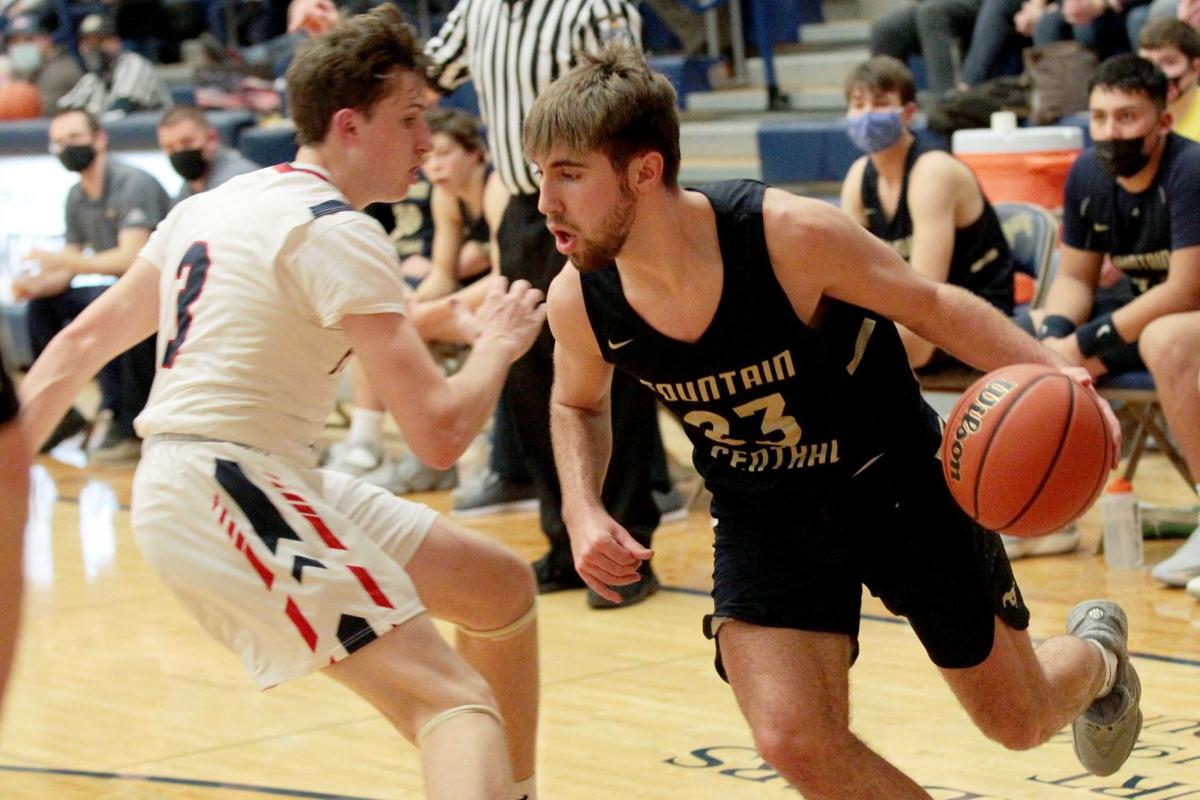 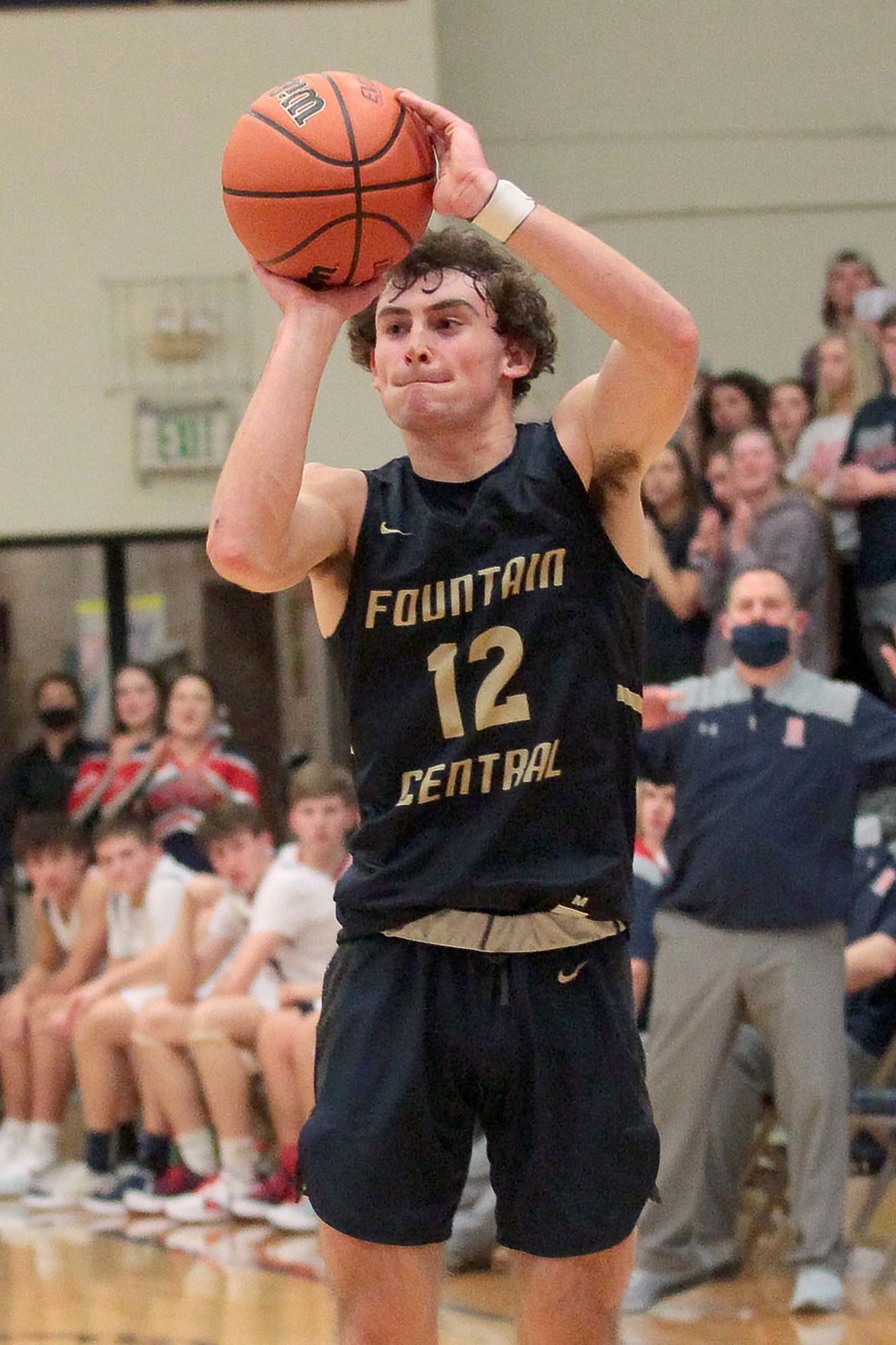 Carson Eberly of Fountain Central hits a three-pointer in the fourth quarter against Seeger.

Seeger head coach John Collins talks to Owen Snedeker after the latter came out of the game in the third quarter.

(Left) Looking to shoot, Cole Kirkpatrick of Fountain Central is doubled teamed by Elijah Greene and Kolton Pearson of Seeger.

Carson Eberly of Fountain Central hits a three-pointer in the fourth quarter against Seeger.

Opening round games of the boys’ basketball sectionals were held at Fountain Central and Attica on Tuesday.

Sectional 39 – a 2A sectional – opened with host Fountain Central taking on Seeger while Sectional 54 – a 1A sectional – saw Attica hosting North Vermillion.

Fountain Central opened the scoring against Seeger with Will Harmon and Andrew Shabi making a pair of baskets around a Kolton Pearson-assisted lay-up by Jorden Gates of the Patriots for a 4-2 edge.

Carson Eberly converted an in-bounds lay-up to push the Mustang lead to four, but baskets by Pearson and Khal Stephen tied the game for Seeger at 6-all midway through the first period.

Mason Larkin responded with a bucket for Fountain Central and then a trey from Harmon gave the hosts their largest lead of the night, five points, at 11-6.

Fountain Central would stay in front for the remainder of the first quarter, a period that ended 17-13 in their favor.

Seeger got five points from Drew Holland on a lay-up and a trey to retake the lead 18-17 with just 90 seconds gone in the second quarter.

The Patriot defense keep Fountain Central from scoring from the field for the entire period with the Mustangs netting only a single point on a free throw by Harmon.

Meanwhile, the Seeger offense put a dozen more points on the board after getting the lead as Owen Snedeker, Christian Holland and Logan McFatridge all contributed to a 30-18 halftime tally.

Christian Holland continued the offensive attack for the Patriots as the third period began and Pearson stole the ball and went the length of the floor for a lay-up that made it 36-18.

Larkin made a basket for the Mustangs that ended a scoring drought from the field of 12:39 that started in the first quarter and ended not quite four minutes into the third.

Shabi followed the Larkin lay-up with a trey for a 36-23 total, but Seeger negated it with a free throw and a short jumper for a 39-23 score going into the final quarter.

That eight minutes saw Shabi, Eberly and Harmon score a total of nine points for the Mustangs while the Patriots added eight for a final score of 47-32.

In the second game of the night, Carroll defeated Clinton Prairie 44-20.

With their win, Seeger advanced to play Rossville on Friday while Fountain Central ended the season with a record of 9-13.

At Attica, Faith Christian opened with a 52-43 win over Clinton Central and then the Red Rambler fans saw their team take the floor against North Vermillion, but the contest did not open in a favorable way for the hosts.

BOB AT THE MOVIES: Odenkirk is somebody who makes the perfect 'Nobody'

Atticus Blank opened the scoring for the Falcons with a lay-up off a pass from Jeremiah Ziebart and then Jerome White added two more points in a game that saw both teams trying to play a slow-down style that looked for open shots.

Almost five minutes passed before John Britt made a driving lay-up for Attica to make the score 4-2 and then two minutes later, Ziebart took a feed from Blank for a 6-2 tally.

In the final 90 seconds of the first quarter, Antonio Jerkins made a free throw for the Ramblers while Dalton Thomas made two for the Falcons for an 8-3 score favoring the visitors.

The pace quickened in the second period as both teams became more aggressive offensively and defensively with Zeb Shonkwiler getting a steal and lay-up for Attica.

White countered with a three-point play for an 11-5 Falcon lead, but then the Ramblers came roaring back with treys from Britt and Garrett Crowder followed by a pair of free throws to put hosts on top for the first time in the game at 13-11.

White stopped the run with a free throw and then Landon Naylor got North Vermillion back on top with putback for a 14-13 score that held into halftime.

After the intermission, Attica regained the lead on back-to-back baskets by Jackson Davis and Zach Black before White put back a miss for the Falcons with over two minutes gone for a 17-16 score.

Davis increased the lead for the hosts on a pair of free throws and two baskets for a 23-16 score that forced a North Vermillion timeout.

After the break, Attica got aggressive and drew three fouls before Britt made another basket for the largest Rambler lead of the game, nine points, at 25-16 with 38 seconds left in the third quarter.

Blank drained a trey off a pass from Naylor to end a 4:30 scoring drought for the Falcons and make it 25-19 in favor of Attica going into the final quarter.

That period belonged to the Falcons as they outscored the Ramblers 25-10.

It started with a Naylor free throw, a Ziebart trey, a runner by Naylor and a trey from Cody Tryon against only a single bucket by Jerkins in the first two-and-a-half minutes, enabling North Vermillion to go ahead 28-27.

Shonkwiler put his team back in the lead with a three-pointer at 30-28, but the Falcons made five of six straight free throws and added a scoop from Naylor for 35-30 score with 2:21 left.

Attica continued to attack and they found Britt open from three-point range and he converted it with 2:04 to go to pull the hosts within two, but by this time the Falcons were in the double bonus and they went to the line to close out the game.

North Vermillion made 9-of-12 from the charity stripe while Attica went 2-of-4 to make the final score 44-35.

With their win, the Falcons advanced to play Covington on Friday while Attica saw its season end with a 2-17 record.