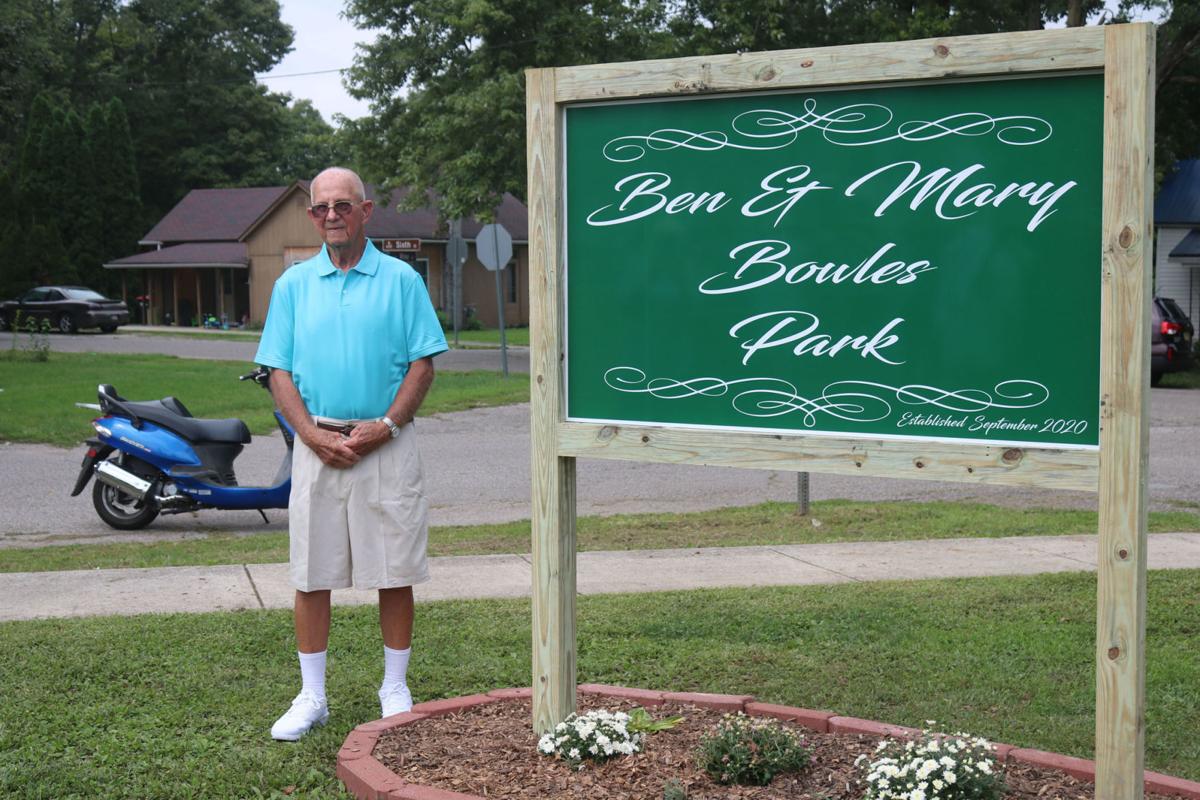 Ben Bowles stands next to the sign renaming West Street Park Ben and Mary Bowles Park after he and his wife. 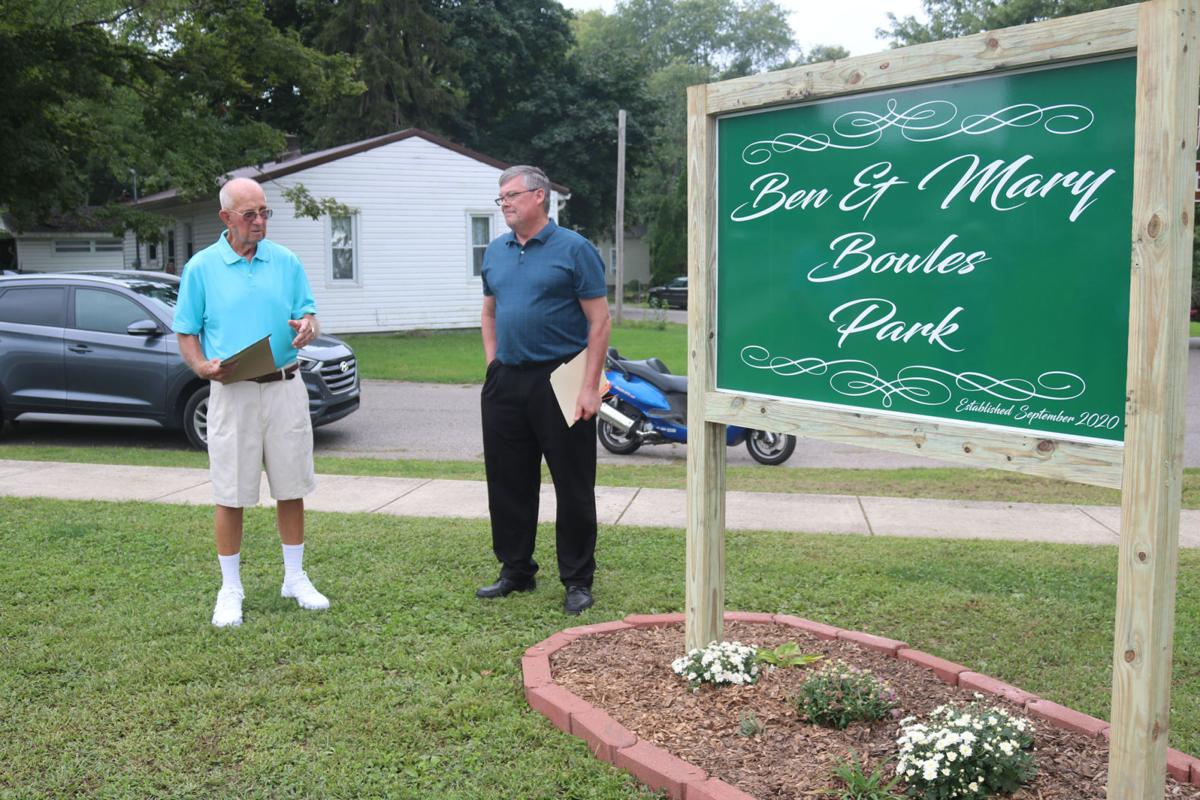 Mayor Duane Roderick stands with Ben Bowles at the renaming of West Street Park as Ben and Mary Bowles Park. 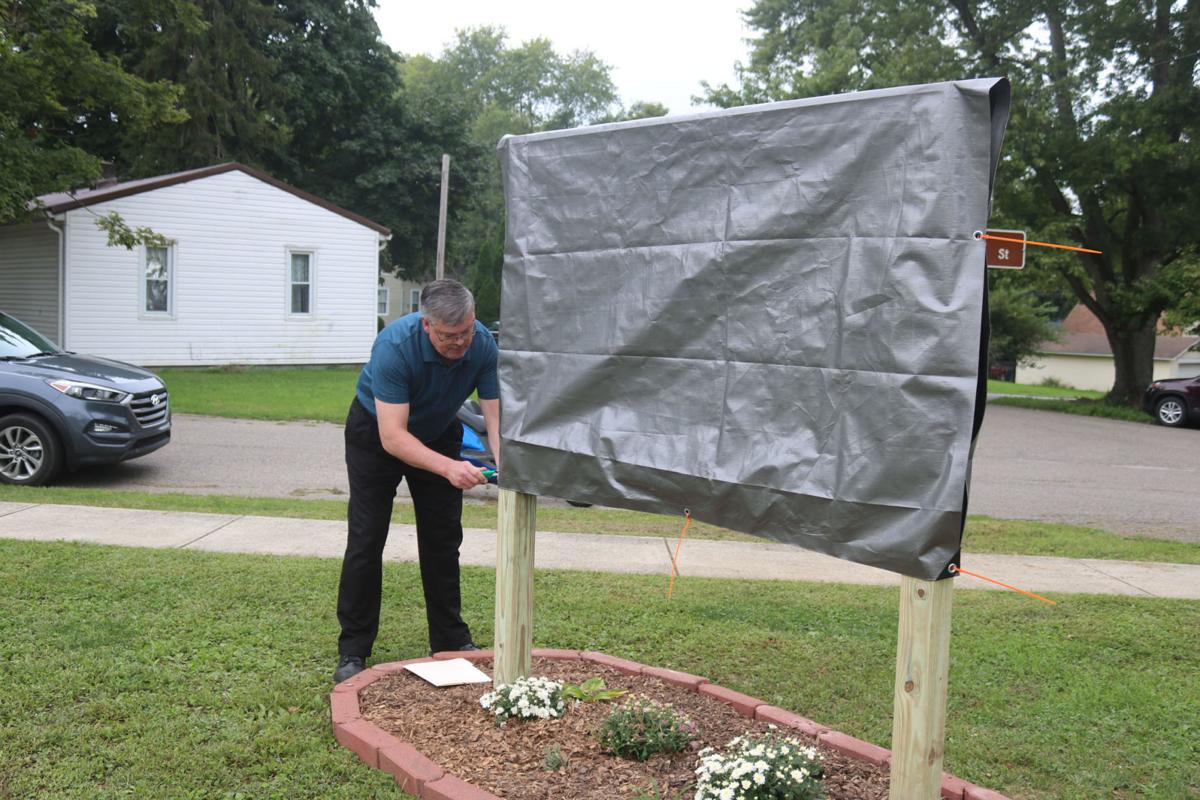 Ben Bowles stands next to the sign renaming West Street Park Ben and Mary Bowles Park after he and his wife.

Mayor Duane Roderick stands with Ben Bowles at the renaming of West Street Park as Ben and Mary Bowles Park.

The park is now called Ben and Mary Bowles Park in appreciation of the couple’s contributions to the city.

A celebration was conducted Sept. 12, with the mayor and other dignitaries present.

“The mayor and common council acknowledge that Ben and Mary Bowles were instrumental in establishing the ASK program, starting the citywide cleanup day, starting the Attica North Neighborhood Association and their involvement with Habitat for Humanity,” he read. The proclamation also notes that the Bowleses were “instrumental in the development of the West Street Park with Mayor Shepherd.

“Today, Saturday, Sept. 12, 2020, we will rename and dedicate West Street Park,” he said. “This beautiful park will now be known as Ben and Mary Bowles Park in appreciation of their love of our city and their neighborhood.”

Ben Bowles was able to be present. Mary passed away in December.

He spoke eloquently about his wife and all the work she did for the community.

“I appreciate this so much,” he said. “I want to thank whoever is responsible for this. Mary would be so pleased.”

He said the city crew did extra work to get the park ready. “And, of course, thank you all so much for coming to remember her,” he said.

He told those in attendance about how the park came to be.

Most everyone owned their home at that time, he said, naming several families who lived in the neighborhood.

“It was a nice, clean, friendly neighborhood,” he said. “This end of town was busy, as was the whole town after the war.”

Many of the businesses were busy, he said, and the depot was busy as the passenger and railway express trains came and went.

There was a baseball diamond, two mom and pop grocery stores, some beauty shops, a machine shop and Attica Floral, “which is still in business today.”

He said they bought their first house in 1951 on Foundry Street “for which we paid $4,000. Our mortgage was $35 a month and the first few months by the time you added the interest to that I thought we would never get it paid for.

“After living in several houses through the next 60 years or so, we decided to downsize and we bought a Habitat for Humanity house on Kentucky Street that I ironically I had helped build.

“Soon after we moved back to this area, we found that the neighborhood had morphed into a largely rental area. In fact, when we did the smoke alarm project, of the 135 houses in our area, 35 to 40 percent of them were rental houses. Several of them were abandoned and many needed extensive repairs.”

He said a grant applied for by city officials to work on blighted areas was denied.

“Well, enter Mary Bowles,” he said, noting that his wife had the White House on speed dial and if she saw something or read something she didn’t like she would call.

“She believed in volunteerism and sharing. She had been a member of the original ASK group — Area Sharing Kindnesses is what that is. It was formed with Harrison Steel in the ‘80s when the work was bad and workers hours were reduced. It is still active today. In fact it is pretty busy with the effects of the virus and kids home from school.

“She is largely responsible for the citywide cleanup which is going on now,” he said, noting that she approached Harrison Steel, which provided trucks to help with the project. “This is a great project for households. I never saw so many mattresses in my life. Stuff gets recycled and that’s great to recycle.”

Ben said Mary was good with a computer and researched neighborhood associations. “After getting details on how to start one she went to work,” he said.

She got a members together to start the group and form a board of directors. A newsletter let people know what was going on and they invited people to meetings and to them involved.

“Our purpose was to make our neighborhood a cleaner, safer, and friendlier place to live and raise a family,” he said.

He said the group would offer services to those in the neighborhood who were elderly or couldn’t do work around their own properties. He said they would trim hedges, remove old appliances, paint or other such jobs.

Mary secured a $1,000 grant for startup costs and got an attorney to do pro bono work and write by laws, apply for tax exempt status and assist on legal matters. “In the spring of 2000 ANNA was formed. ANNA is the acronym of course for the Attica North Neighborhood Association,” he said.

Ben said the group never was inundated with requests for help so members would offer the services to those around the neighborhood.

Several people are still keeping the work going, he said, by planting flowers, mowing lawns and other work.

Once the Bowleses moved back to Kentucky Street Mary started noticing the kids didn’t have a place to play.

“So she began to seek a place,” he said. “There were several small children in the area at the time. She was thinking about the little kids because the big kids could ride their bikes to the city pool or wherever.”

At that time the lot where the currently sits had an abandoned house on it. Mary got the owner to donate the lot to the city. She worked with the Mayor Shepherd and the city on a plan for the park. “Enter ANNA again,” he said, “who seeded the ground and leveled it for mowing.”

The park board starting putting the playground equipment in the park, he said. “The Attica Williamsport Rotary Club built this beautiful structure as part of a project with the state organization. I never did know who floated the idea to the local Rotary but it is a very important part of our park,” he said. Harrison Steel donated $500, with which the board bought a water fountain. People donated trees and other items for the park.

“Mayor Shepherd was a big factor in our quest,” he said. “He and the city council and the city crew got 11 unsafe and dilapidated houses demolished and turned into green space.”

Ben noted that a block away a basketball court now sits where an old home sat. “We wound up with that and the city tore it down,” he said.

The court is well used and pretty, Ben said.

“Thanks to the vision and organization skills of Mary Bowles this end of Attica has definitely become a cleaner, safer and more desirable place to live and raise a family. May she rest in peace.”

Those in attendance gave him a rousing applause.

Roderick offered everyone to enjoy refreshments. “I’m really happy we were able to do this,” he said.

Roderick then unveiled the new sign which reads “Ben and Mary Bowles Park”.