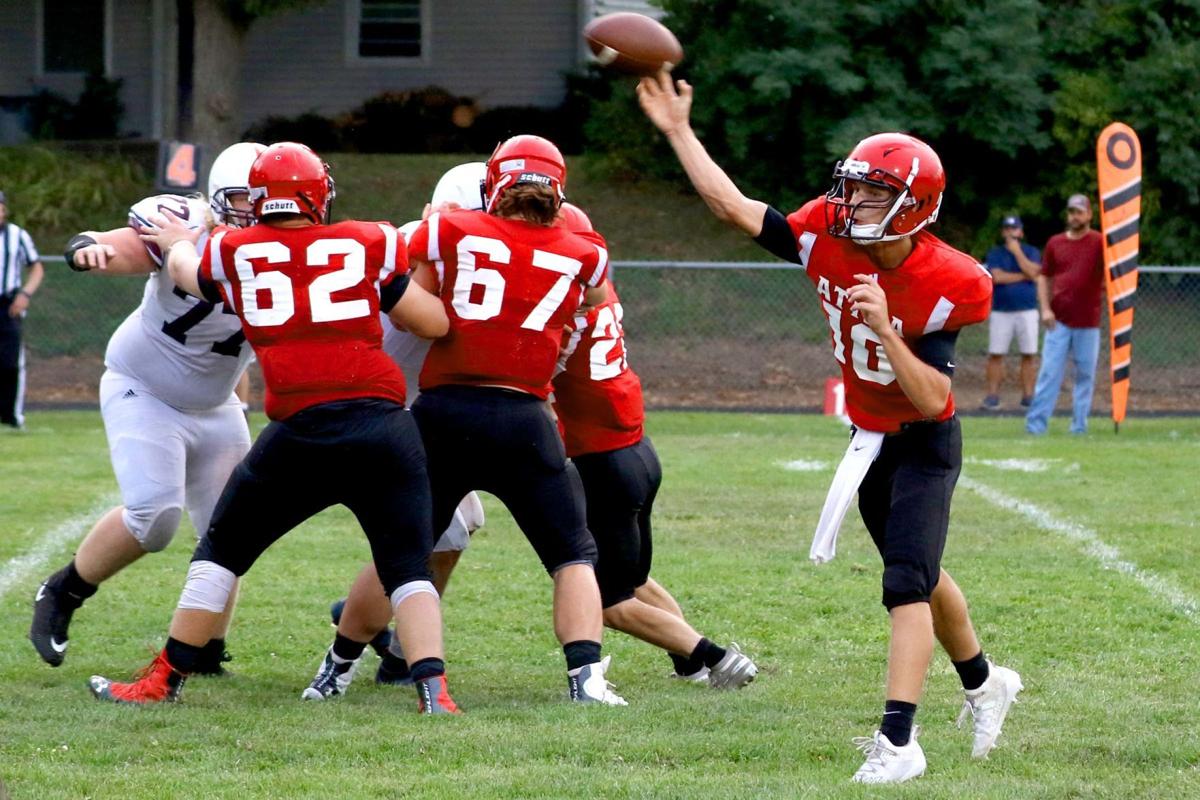 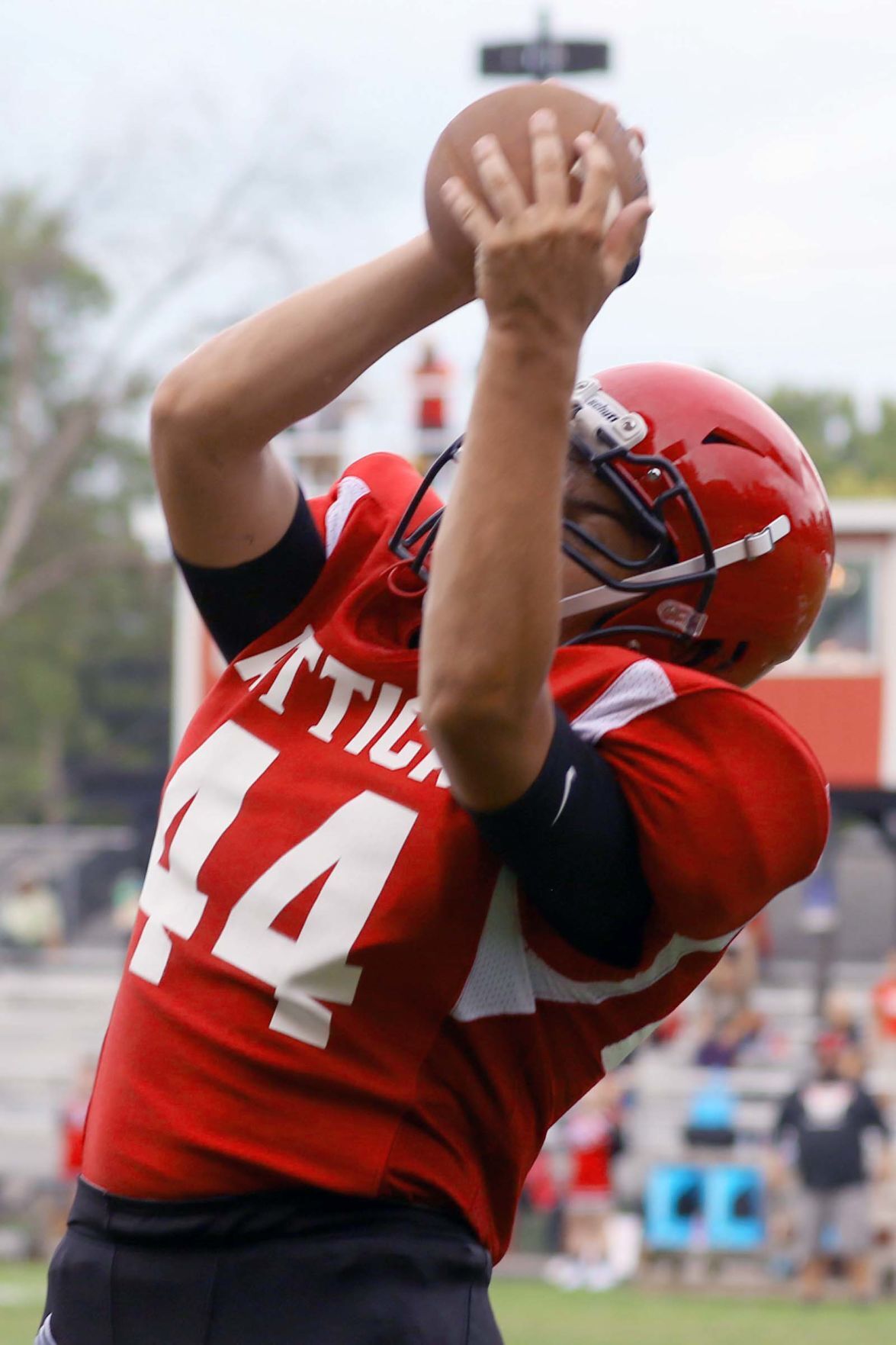 Jackson Davis of Attica picking off a pass on the sideline. 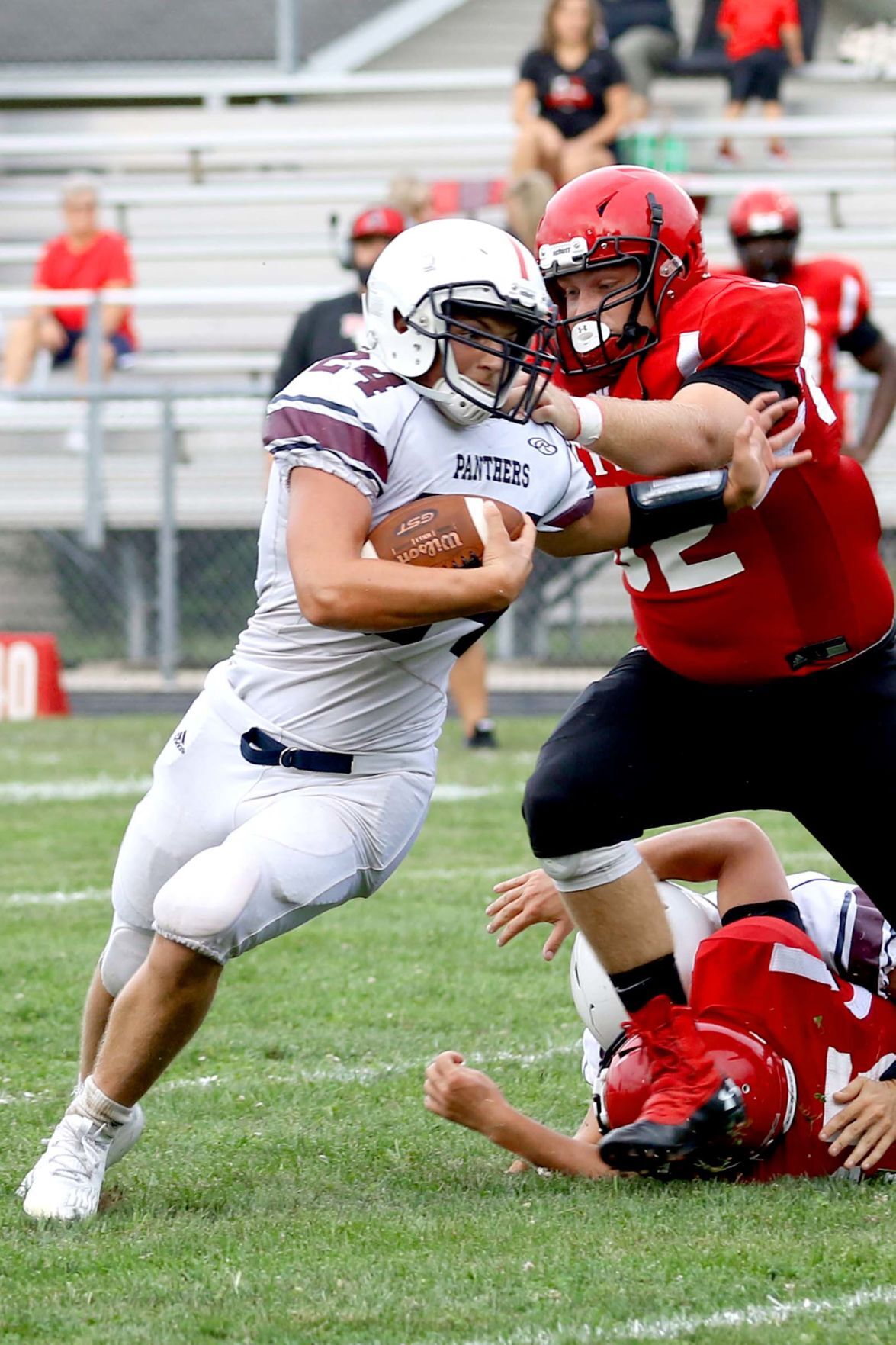 Brandte Gayler of Attica tackling Derron Hazzard of Riverton Parke for no gain. 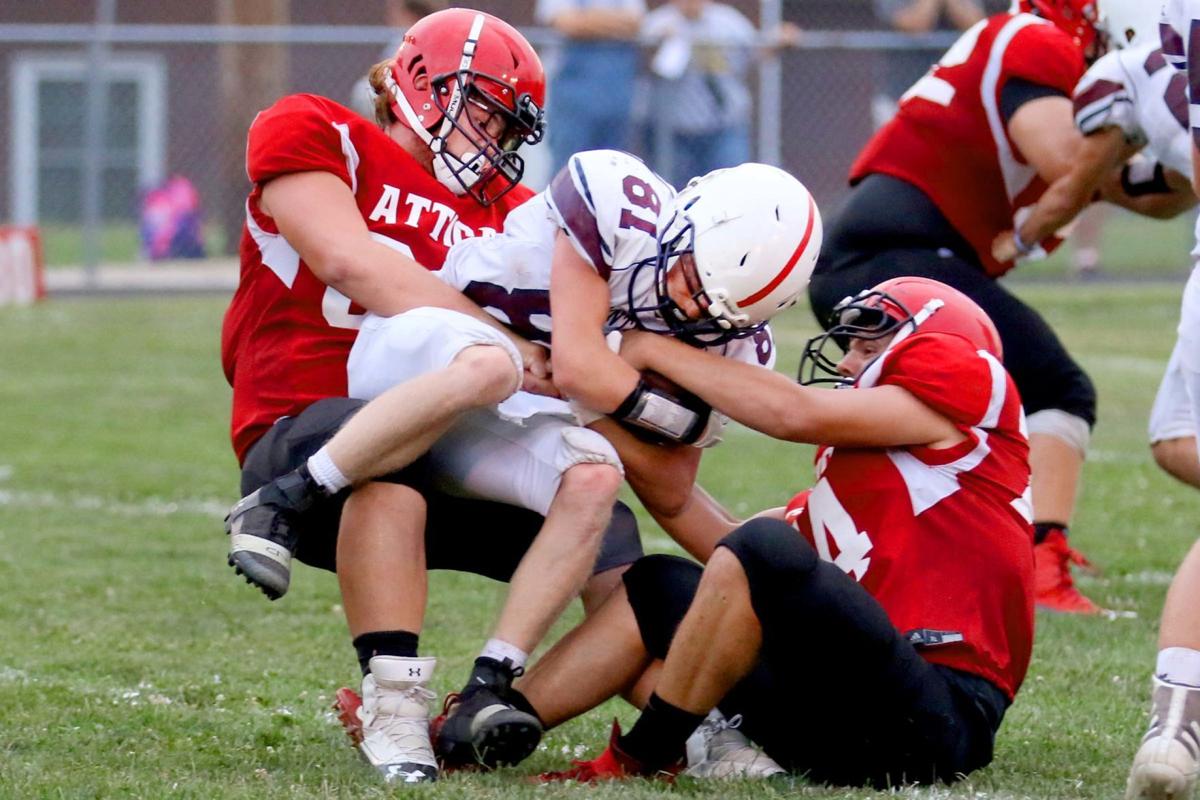 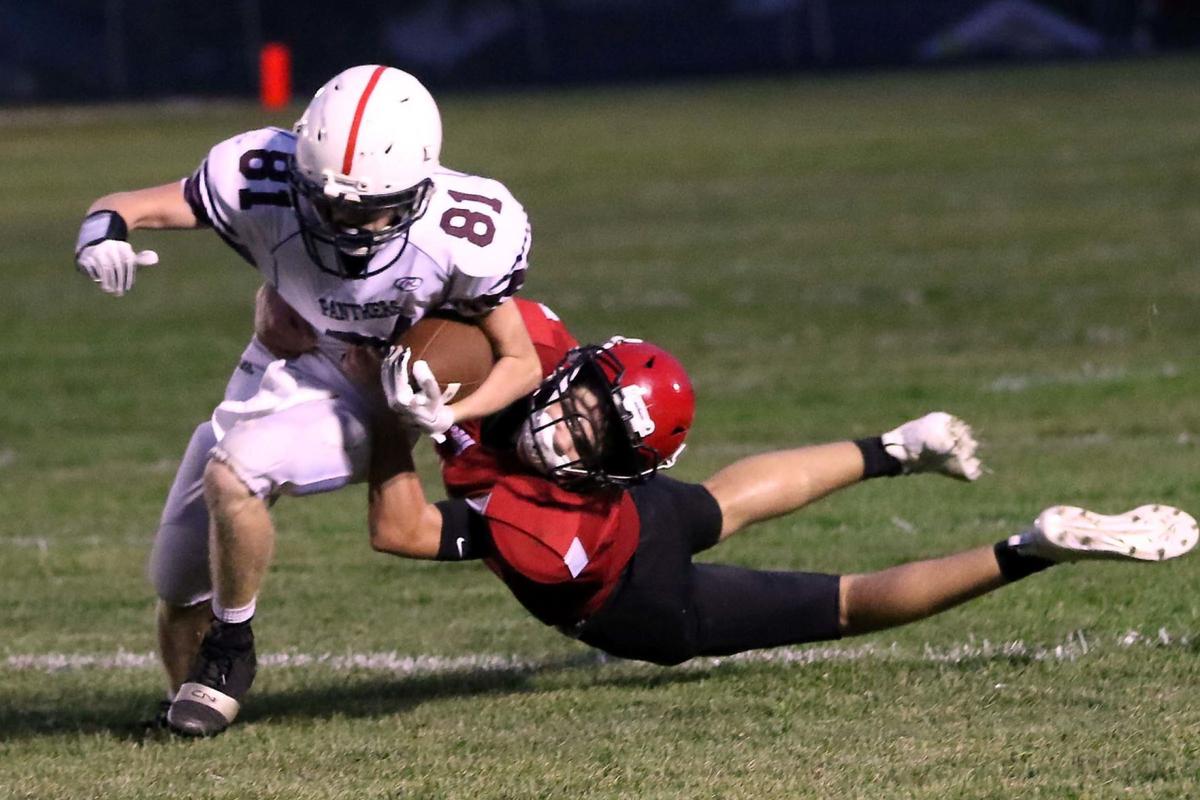 Jackson Davis of Attica picking off a pass on the sideline.

Brandte Gayler of Attica tackling Derron Hazzard of Riverton Parke for no gain.

New Attica football coach Theron Schmid picked up his first career win when the Red Ramblers hosted and defeated Riverton Parke at Bruce Field on Monday night by the score of 20-12.

Coming into the contest Attica had only faced Frontier in a game that was added when the Covid-19 pandemic caused several area schools to have to suspend play and it was a road contest that the Ramblers lost 48-32.

Riverton Parke had played no one prior to the game at Attica as their school had suspended classes due to the virus.

This lack of preparation and game experience by both teams was obvious early in the game as there were numerous penalties and timing problems in the game execution.

While the contest was not pretty, it was intense as both squads were eager to pick up a win.

Riverton Parke got the ball first and they drove deep into Attica territory before Jackson Davis picked off a Panther pass on the Rambler 11-yard line to stop the drive.

Quarterback John Britt and running back Zach Black took turns carrying the ball early for Attica, but then Britt threw to Black for a short gain and to Zeb Shonkwiler for about 30 yards only to see the latter completion nullified by a flag.

One play later, the Ramblers fumbled and Riverton Parke recovered although it did them little good as they gained all of five yards in three plays before punting the ball back to Attica.

As the game moved into the second quarter, the hosts began to pick up yardage on the ground with Britt and Black doing the carrying.

It took eleven plays, but Attica scored on a three-yard run by Black with the two-point try following to make it 8-0 with 8:17 left in the half.

The Panthers responded with a seven-play, 56-yard drive to cut the margin to two at 8-6 with all the yardage coming on the ground.

Both teams had one more possession in the first half, but neither could score so it remained that same 8-6 going in to the third quarter.

Attica got the ball to start the second half but could go nowhere, punting after three plays only to get the ball back when Riverton Parke fumbled on their second snap.

Once again, the Ramblers struggled to move the ball and they gave it back on a fourth-down incompletion.

Two plays into their second drive, the Panthers fumbled again and Attica recovered on the Panther four.

On the next snap, Black picked up those four yards for a touchdown to make it 14-6 with 7:14 left in the third quarter.

The Panthers managed to get a pair of first downs and use about three minutes of time on their next possession, but they could not find the end zone and Attica got the ball back once again.

It looked as though the ensuing drive would be a failure as Hayden Martin picked off a Britt pass, but the interception was nullified by a roughing the passer penalty on the Panthers.

That put the ball on the Riverton Parke nine-yard line from where Black gained a yard and then Britt picked up the other eight to score for a 20-6 tally.

Britt tried a pass to Shonkwiler for the two-point play, but the Panthers broke up the pass so it remained 20-6 with the horn ending the third quarter after the pass hit the ground.

The Panthers used an almost five-minute drive at the start of the fourth period to score again, finishing with an 8-yard run by Derron Hazzard.

The visitors tried for two but came up short, so the score was 20-12.

The remainder of the game saw both teams move the ball, but neither could punch across another score as incompletions, bad snaps and penalties killed their drives.

The final 20-12 may have been Schmid’s first as a head coach, but the former Attica quarterback was not happy with the play of his team, particularly the offense.

“We couldn’t finish,” he lamented. “Two weeks ago, we got off to a great start but didn’t finish and tonight we had chances to score and didn’t.”

Schmid did, however, complement Black, saying the back “had run hard” and his effort was great, but that the overall offense still needs work.

Turning to his defense, he noted that Riverton Parke runs an unusual offense and that his team did well in facing it after having only played one game.

“We did what we could in preparation,” Schmid explained, “but we just don’t have enough players to practice the way we need to practice.”

The team had 15 dressed for Frontier and 17 for Riverton Parke but with so few players Schmid said the team cannot run a full 11-on-11 practice.

“We’ll do what we can,” Schmid said in conclusion, “but I know what this program used to be and I want to rebuild it back to what we had. Right now, that’ll be tough, but we’re going to go back to work tomorrow and focus on getting better.”