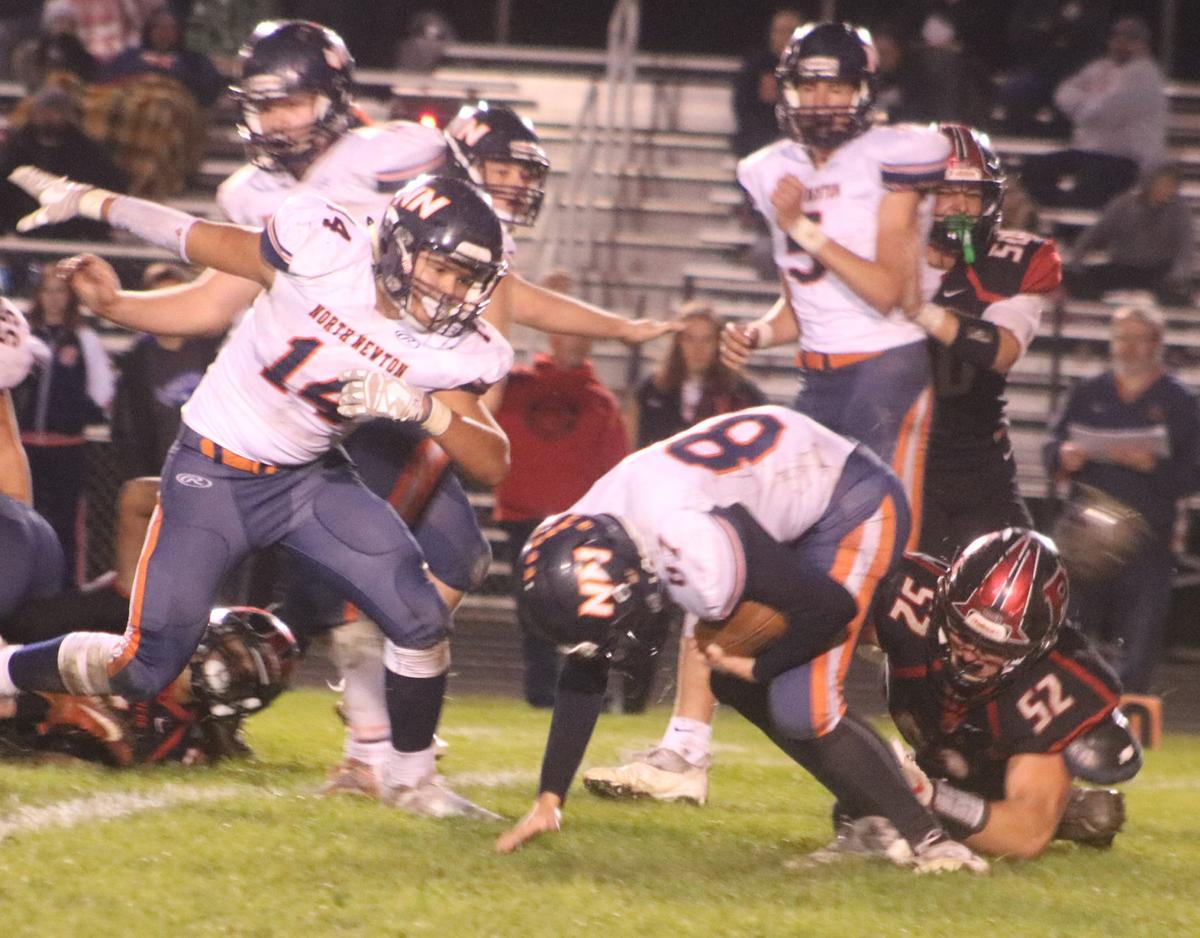 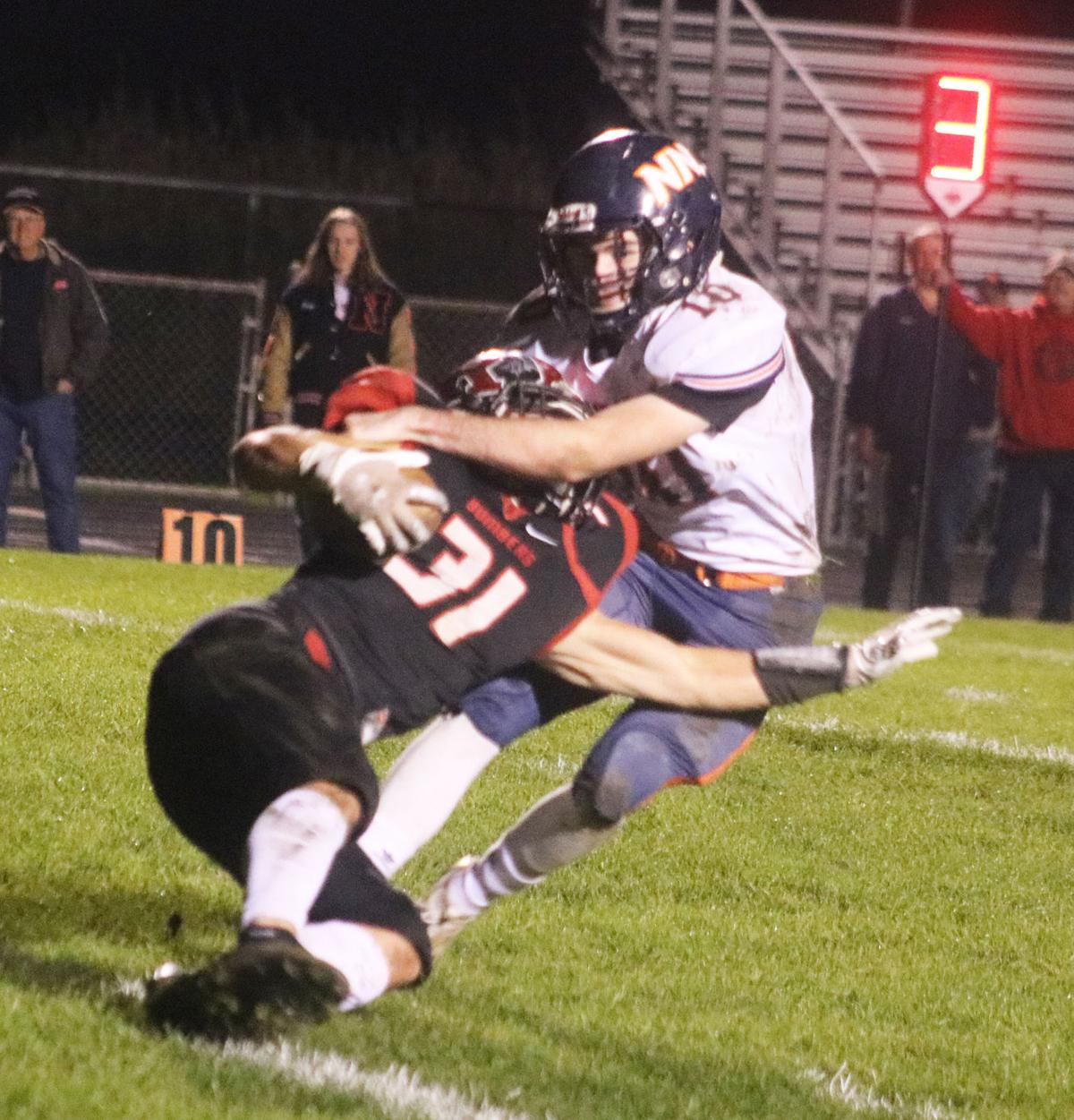 North Newton’s Lane Zander keeps RCHS senior Kelton Hesson out of the end zone on a 12-yard pass play during the first half of Friday’s game. The Bombers would score a play later on a 1-yard run from Dylan Kidd.

North Newton’s Lane Zander keeps RCHS senior Kelton Hesson out of the end zone on a 12-yard pass play during the first half of Friday’s game. The Bombers would score a play later on a 1-yard run from Dylan Kidd.

RENSSELAER — Rensselaer Central put its offense on full display Friday in a 52-8 rout of rival North Newton in a Class 2A Sectional 33 opener.

But it was the defense that set the tone early, denying the Spartans, who finish the season at 6-4, a chance at taking the first shot. North Newton used 12 plays and traveled 51 yards to the Bombers’ 14-yard line on its first offensive series.

However, Rensselaer (6-4) stopped the Spartans on a fourth-and-2 from the 14-yard line, dropping sophomore running back Kadyn Rowland for a loss to take over on downs.

“I thought our defensive coaches did a fantastic job of game planning,” Bombers coach Chris Meeks said. “That’s not the same offense we saw in week two, so we watched a lot of film. I thought the coaches did a great job of changing our defense. We’ve been running a 4-4 all year, but we went to a 5-2 and it was effective.

“I really thought we came out and played with a passion and lots of enthusiasm. We really got after it for four quarters.”

The Bombers would proceed to score on their next six possessions to take a 42-0 lead into halftime. Because the Bombers had a lead of 35 or more points, the game continued with a running clock in the second half.

“Their offense is really good,” North Newton coach Scott Rouch said. “They know what they’re doing and they do it really well. We can’t simulate it ever, but our guys knew what they were going to face. We drove the ball, ate up clock, which is what we wanted to do. We would have liked to finish and score, but after that we couldn’t get a first down.”

Rensselaer used an 11-play, 85-yard drive to open the game scoring in the first quarter. The Bombers chewed up nearly four minutes of the clock, with senior running back Dylan Kidd scoring on a 1-yard run at the 2:19 mark. Kelton Hesson, a senior, added the two-point run for an 8-0 lead.

Kidd, who finished with 141 rushing yards on 11 carries the first half, had runs of 24 and 27 yards to set up the first score.

“I can’t do anything without the guys up front,” Kidd said. “Without them, I’m nothing. They make good running backs.

“Our front guys have been busting their butts. They worked really hard this week and I’m proud of their performance tonight.”

Kidd also carried in the next touchdown from four yards out to give his team a 14-0 lead early in the second period. Rensselaer started the drive from North Newton’s 44-yard line.

Meeks feels Kidd, who missed three games with an ankle injury, is starting to get his legs under him again. The 5-foot-9, three-year starter needs just 55 more rushing yards for another 1,000-yard season.

“He has not been 100 percent, but he’s getting better week to week and getting more explosive. It was good to see,” Meeks said.

In the play of the night, RCHS scored again when Kidd took a handoff from senior quarterback Tate Drone, sprinted to the right to draw North Newton defenders then threw back to the left to Drone, who completed the 45-yard touchdown play by running it into the end zone for a 21-0 lead.

“We’ve had that in all year, but we felt like we could run that this week on them,” Meeks said of the trick play. “We practice it all week and it went great and tonight they executed it perfectly. I thought Dylan Kidd did a great job of being patient. Things started to collapse on him, but he was patient and he just needed to get it out there and he did.

“Playmakers made plays tonight. We stayed away from the penalties. We executed well tonight, we gave Tate time to throw and we put a few wrinkles in.”

Lady Bombers click on offense in rout of Winamac

“We’ve been working on that play all week,” Drone said. “I’m glad I finally got to catch a passing touchdown and I’m glad coach Meeks called that play.”

After North Newton was held to three-and-out, the Bombers got their fourth score when Kidd capped a two-play, 42-yard drive with a 10-yard touchdown run with 8:14 left in the first half.

RCHS closed out the half with a pair of touchdown passes from Drone, who hit Hesson on a 35-yard play in the end zone with 3:19 left and added a 24-yard pass to senior tight end Kenseth Johns with 15.5 seconds until intermission for a 42-0 lead.

Renselaer’s lone touchdown in the second half came on a 22-yard run from freshman Diego Hernandez-Reyes. Junior kicker Cohen Craig then converted his first field goal of the season, splitting the uprights from 22 yards out to give his team a 52-0 lead.

North Newton’s Evan Gagnon then took the ensuing kickoff and traveled 90 yards down the sideline for the Spartans’ fifth special teams score of the season. Gavin Johnson’s two-point run produced the final points for the Spartans, who bid farewell to Johnson and five other seniors after the game.

Drone finished the night by completing 7 of 8 passes for 111 yards and two scores. Besides 141 rushing yards and three touchdowns, Kidd also passed for 45 yards and a score.

“The offensive line got a good push today,” Drone said. “They were able to move their man and Dylan’s a great back and he was able to read those holes and just go.”

Gagnon was just 2 of 5 passing for 20 yards for the Spartans and Rowland, who had over 100 yards rushing in a regular season loss to the Bombers in August, managed just 38 yards on 22 carries Friday.

North Newton dressed just 20 players Friday, with eight others on the sidelines with injuries.

“Like I told someone, we’ve got to play perfect and they’ve got to play less than good for us to win,” Rouch said. “If they play good and we play good, it’s not going to be enough because they’re better than us. Credit to coach Meeks and the program he has built. Even in their down years they’re solid. Everybody said well, they’re down this year at 5-4, and I’m like no, they’re not. Do you see who they play? They play some stiff competition. I told them we’re going to get their best. They’re not going to overlook us. You’re going to get their best game.”

The Bombers advance to the sectional’s second round where they will face Andrean on the road next Friday. The fourth-ranked 59ers (7-3) crushed Wheeler, 44-6, Friday night.

Kidd said he’s looking forward to the challenge of playing one of the state’s top 2A teams.

“We’ve just got to put our heads down this week and get to work. We’ve got to get prepared,” he said. “We’re going to have to click on all cylinders. I’m really excited to see what we can do against them.”

Andrean has knocked RCHS out of the sectional tournament in each of the past two seasons.

“We have nothing to lose,” Meeks said of the most recent match-up. “Nobody in the state of Indiana or the country is picking us to win that game, but we play them well. They get all the press. They’re one of the favorites to win state, but if we play like we did tonight, we’ll be right in that ball game and have a chance to win it. I like our chances.”