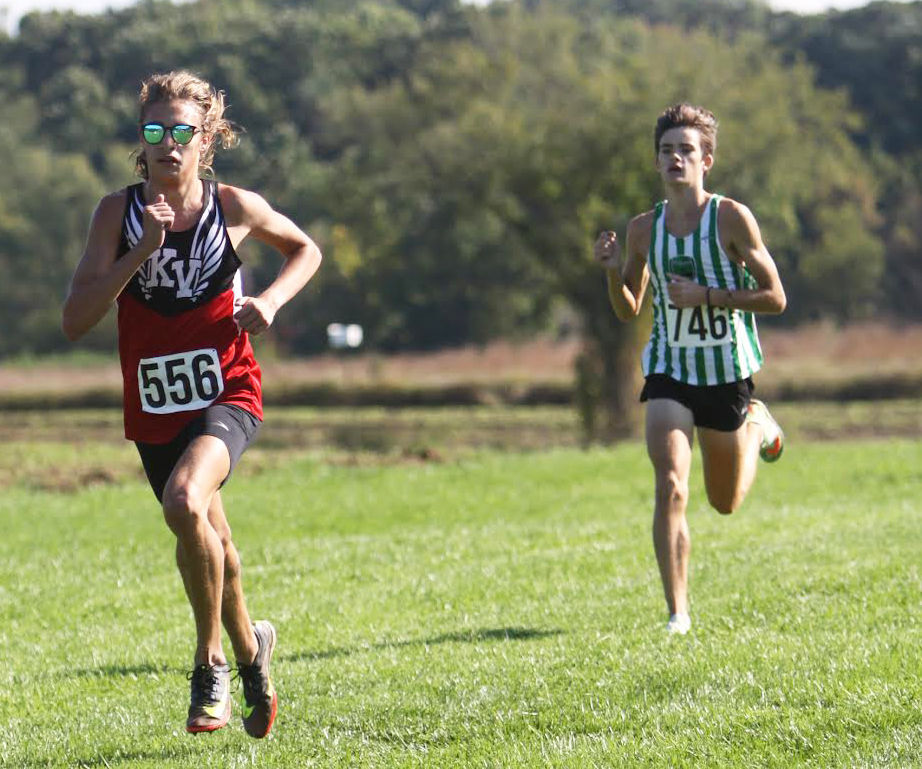 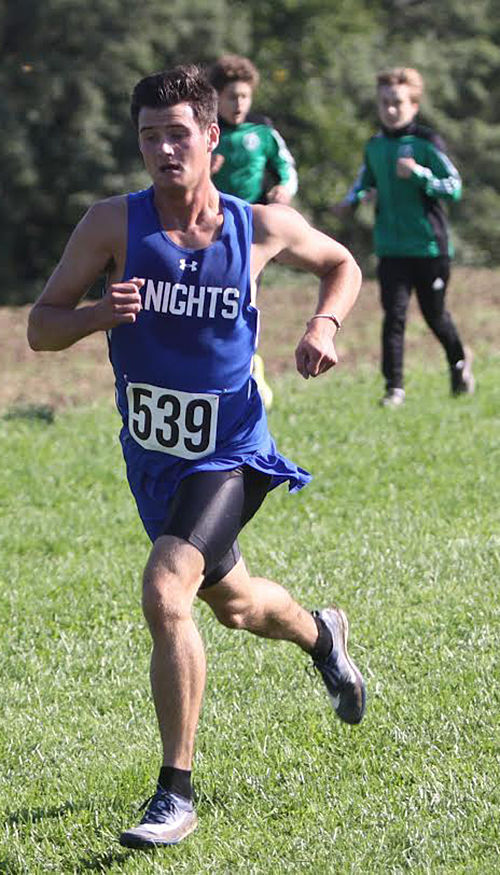 Knights senior Jonah Ingram grimaces as he nears the finish. 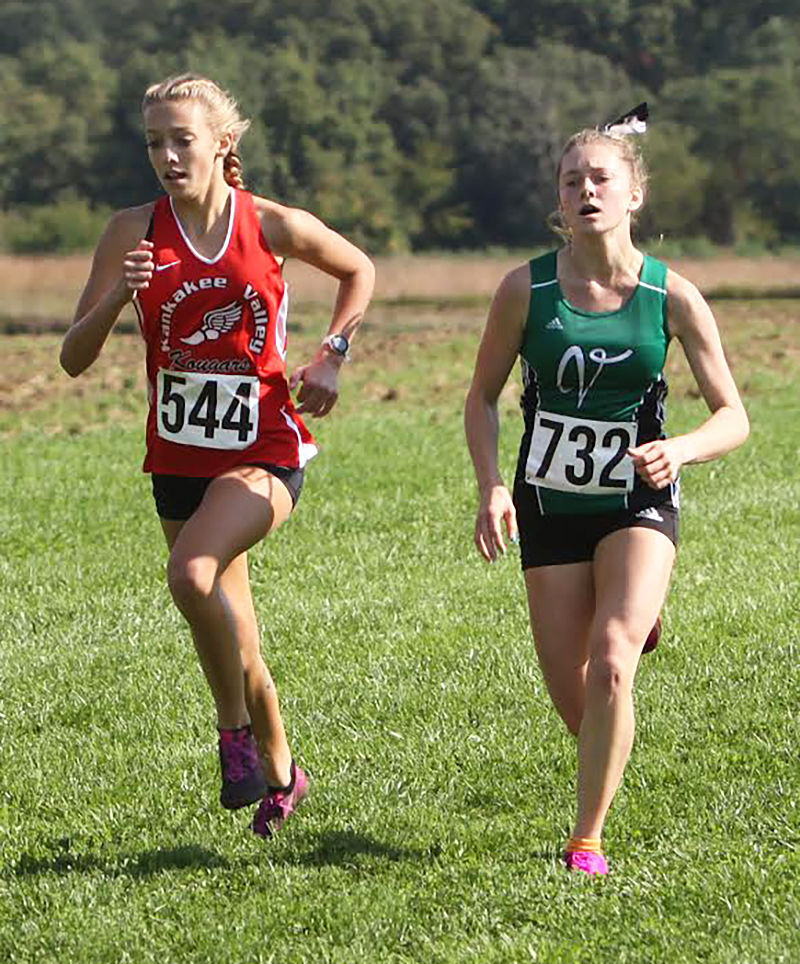 KVHS sophomore Emma Bell (left) duels with Valpo’s Lilian Maldia as they race towards the finish. 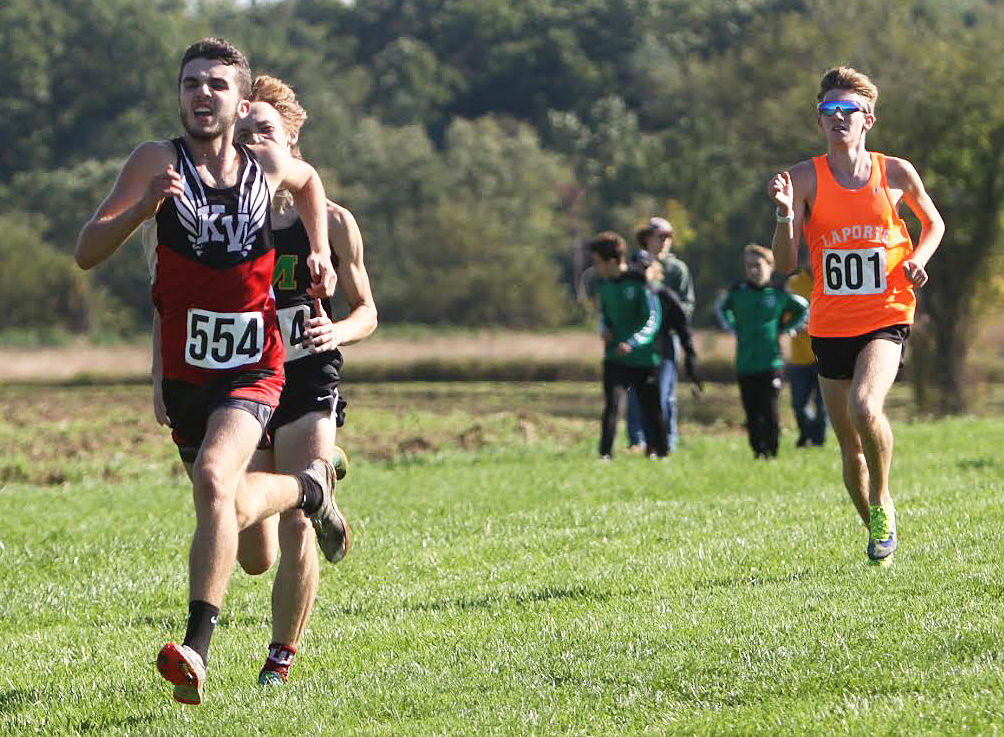 KVHS sophomore Ethan Ehrhardt breaks from the pack to finish high enough to qualify for semistate.

Knights senior Jonah Ingram grimaces as he nears the finish.

KVHS sophomore Emma Bell (left) duels with Valpo’s Lilian Maldia as they race towards the finish.

KVHS sophomore Ethan Ehrhardt breaks from the pack to finish high enough to qualify for semistate.

VALPARAISO — On a soggy and muddy course at Sunset Farms in Valparaiso last Saturday morning, several local cross-country runners earned the right to compete at the Oct. 23 semistate, which will again be held at New Prairie, a course likely to be even soggier and muddier.

The top 10 individuals from non-advancing teams and the first 5 qualifying teams from each regional advance to designated semistates.

The semistate will include runners from four regionals, including Crown Point, Culver Academies, Harrison (West Lafayette) and Chesterton.

There were 88 entrants in the girls’ race.

For the local boys, Hoffman finished second overall with a blistering time of 16 minutes, 25.7 seconds. He was beaten by repeat medalist Cole Raymond of LaPorte, who crossed in just 16:06.4.

“Justin ran where we expected,” explained KV coach Tim Adams. “We put him in a good position to challenge at the top this week; he will continue to be a threat next week. He’s not slipping in under anyone’s radar, that’s for sure.”

Hoffman’s 16:25 marks his third fastest career time for a 5K. Ehrhardt, meanwhile, qualified for his second semistate in as many years.

Consistency the buzz word for Bombers ahead of 2021-22

“Ethan puts a lot of pressure on himself,” said Adams, “but he handled it well, even though he’s been fighting through some breathing issues. His race was nothing if not gutsy.”

Wuethrich will be competing in his third semistate, while Ingram qualified for his first. Last week’s Rensselaer Sectional champion, senior Owen Thomas of Morgan Township, finished behind Wuethrich in ninth place (16:51.2).

The overall winner for the girls was New Prairie’s Lillian Zelasko, who smoked the course in 18:32.9.

New Prairie, which many runners list as their favorite course in Indiana, if not in the entire Midwest, features insane hill climbs, ravine descents, creek beds and wooden bridges. The semistate races will be held at 10:30 a.m. (boys) and 11:15 a.m. (girls).

The top 10 individuals from non-advancing teams and the first six qualifying teams from each semistate shall advance to the state finals.