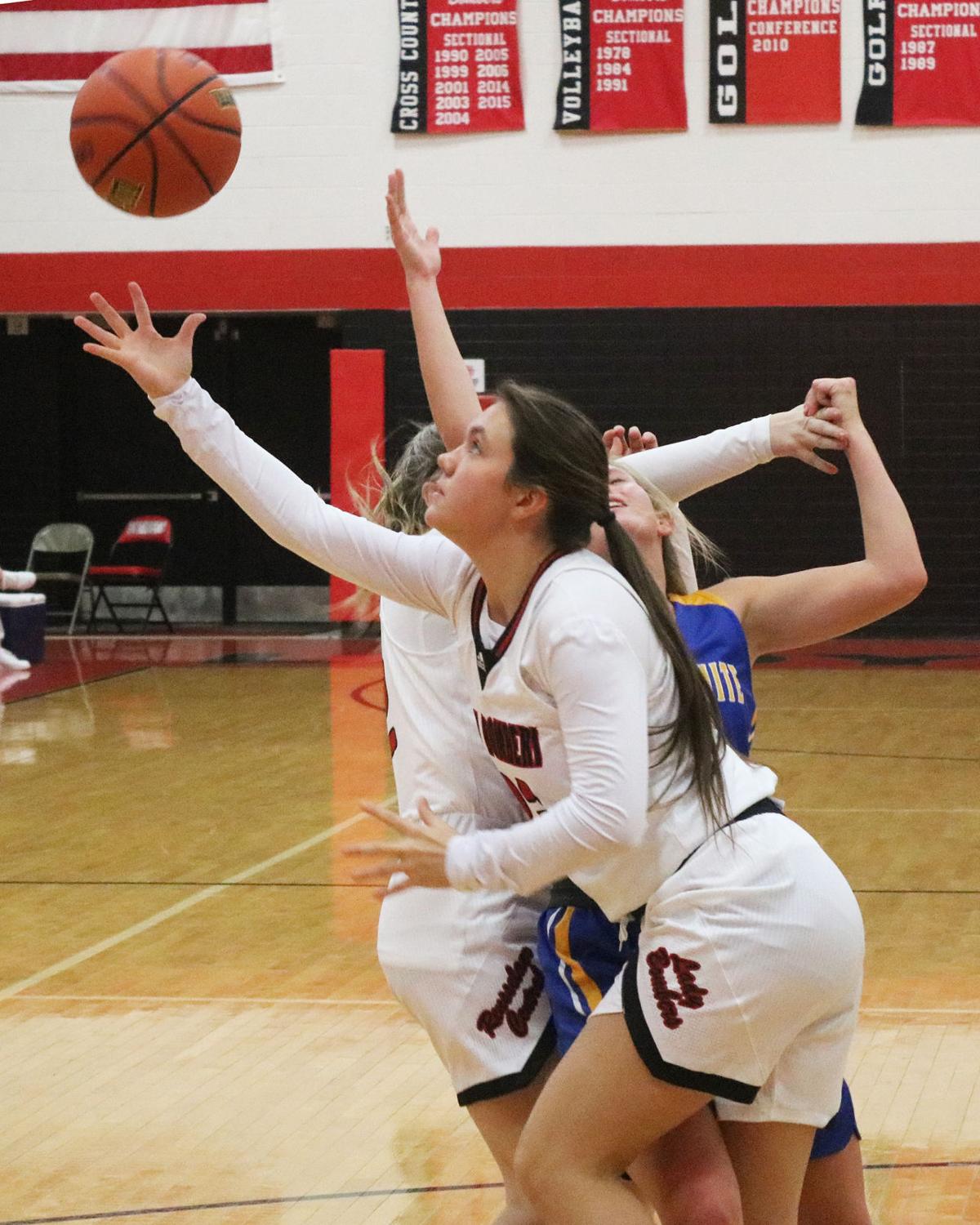 RCHS sophomore Sarah Kaufman had six rebounds off the bench against North White this week. 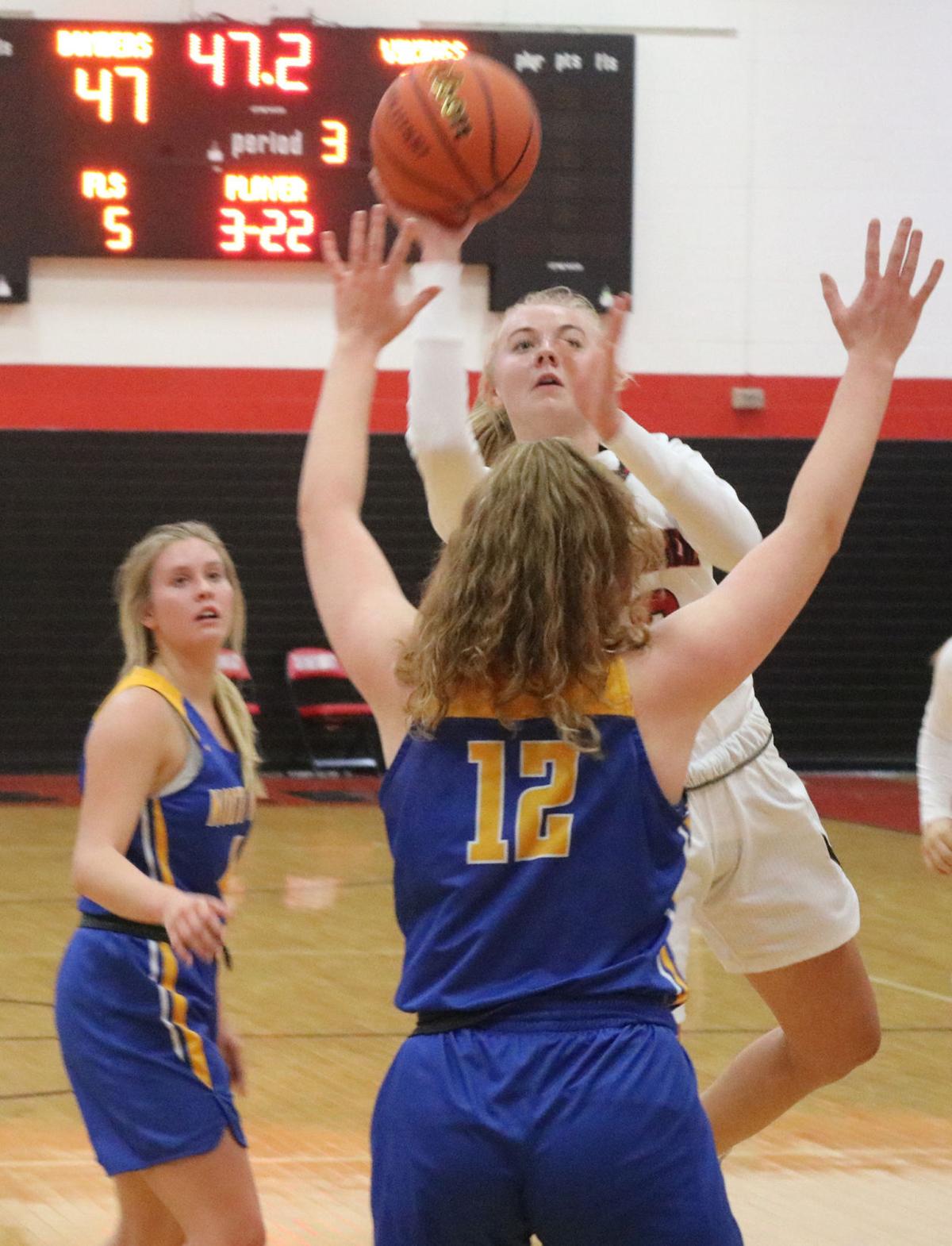 RCHS freshman Taylor Van Meter was one of three Bombers to score in double figures against North White. 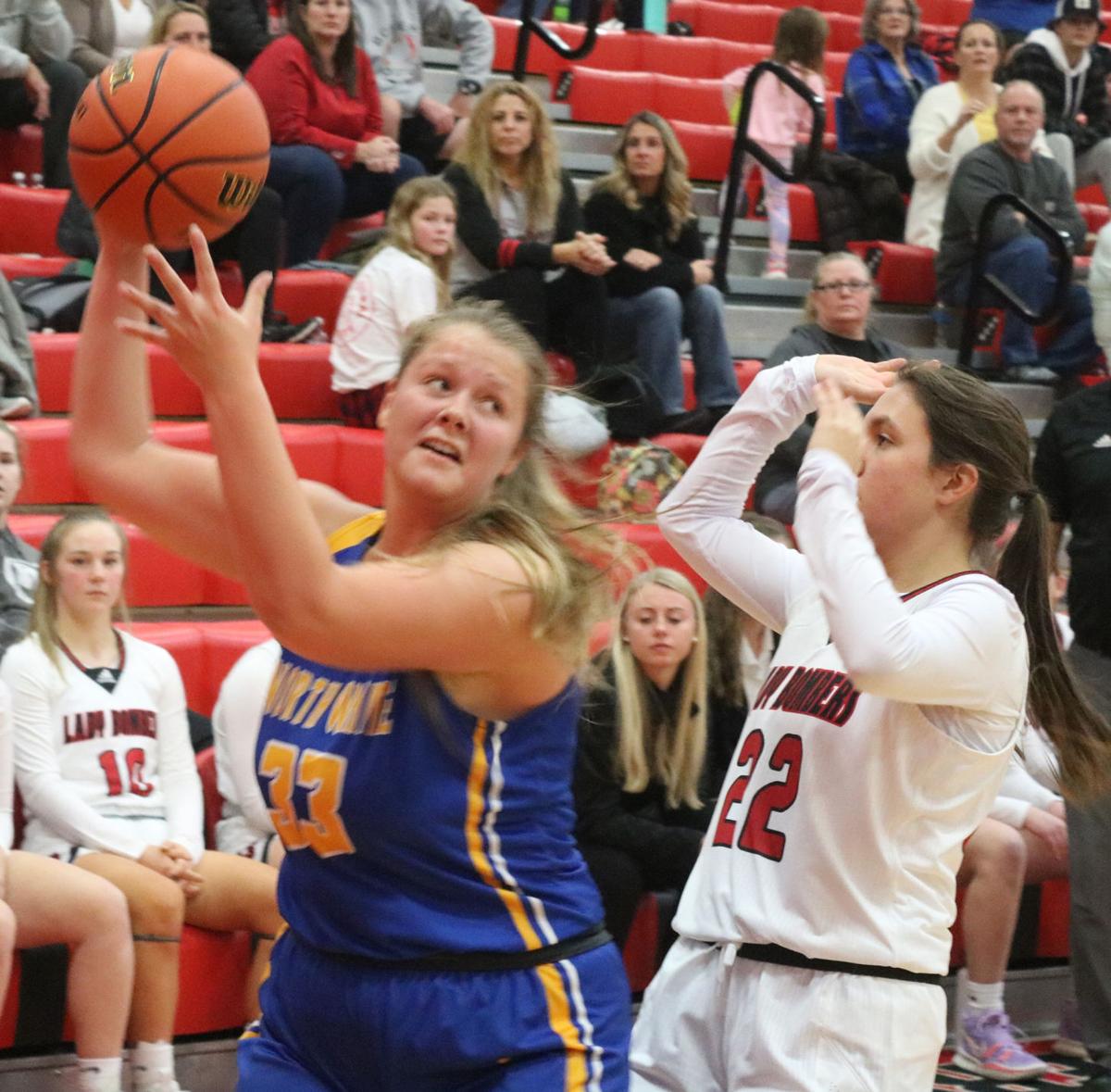 North White junior Tessa Robertson led her team with 15 points and 12 rebounds against RCHS this week.

RCHS sophomore Sarah Kaufman had six rebounds off the bench against North White this week.

RCHS freshman Taylor Van Meter was one of three Bombers to score in double figures against North White.

North White junior Tessa Robertson led her team with 15 points and 12 rebounds against RCHS this week.

RENSSELAER — North White came limping into its Nov. 23 meeting with Rensselaer Central, with three starters sitting on the sidelines with injuries.

And while the Vikings were able to stay close to RCHS — trailing 18-12 after the first period — the Lady Bombers were able to wear down a thin North White lineup in collecting a 60-35 victory.

The Bombers (7-2) forced 24 turnovers, including eight in the second period that contributed to easy baskets on the offensive end. Rensselaer was 8 of 16 from the floor in the second quarter and finished 16 of 31 in the first half to build a 37-16 lead.

“They’re a good team, well coached and are disciplined,” Bombers coach Wes Radtke said. “We just had to get our tempo and push our agenda and I thought we did a really good job of not giving in to what they were doing and doing more of what we needed to do. The girls really put their best foot forward.”

The Vikings were a noticeably tired bunch in the fourth quarter.

“We knew they were good,” said Vikings coach Bryan Heimlich. “They pressure you all over the court. Full-court, half-court. We worked on that. I thought in that first half, we did some good things. We broke it a few times. We weren’t able to execute a couple of shots, missed a couple of layups. You have to pass the ball well. You have to throw some solid bounce bases and knee passes against them because they jump passing lanes really well.

“Give them credit. They come after you and keep coming after you. They’re a good team. I told the girls, don’t be down. They’re 7-2 for a reason. They’re no slouch.”

“It’s a struggle,” coach Heimlich said of the losses. “I told the girls there’s two ways to go about it. You can sit and sulk about it or we can just keep fighting. I hope they come back and do the latter. Tonight they showed some fight.”

North Judson goes off to rally past Bombers, 74-67

RCHS senior Jessie Ringen hit 6 of 7 shots from the floor in the first half. She finished with 15 points, all coming in the first two quarters, and added three steals.

Senior Morgan Van Meter had 14 points on 6 of 13 shooting and added three steals and three assists and freshman Taylor Van Meter had 12 points with five steals off the bench.

Abby Ahler, a senior, had eight points and 10 rebounds and sophomore Sarah Kaufman had six boards for RCHS, which hosts Winamac on Dec. 2.

“That’s why we do what we do in practice, to be in shape and outlast people,” Radtke said. “We were able to accomplish that and something we hang our hat on.”

The Bombers were coming off a 1-2 finish at the IU Health Hoops Classic in Lafayette. RCHS lost to Harrison and West Lafayette and beat Lafayette Jeff in its first appearance in the event.

“I was very proud of the girls,” Radtke said of his team’s play at the tournament. “I told the girls this is one of those times where you lose and you hate losing, but we learn from these things and we get better from it.”

A major highlight at the tournament was Ringen getting the 1,000th point of her career in the Bombers’ win over Jeff.

“It was nice to see her get it,” Radtke said. “A great kid, great athlete. She’s put the time and effort in and I’m glad to see her get rewarded for that. The sky’s the limit for her. But the biggest thing, if you ask her, is we want to win a sectional and get that done first. I’m proud of that kid and it’s a great accomplishment.”