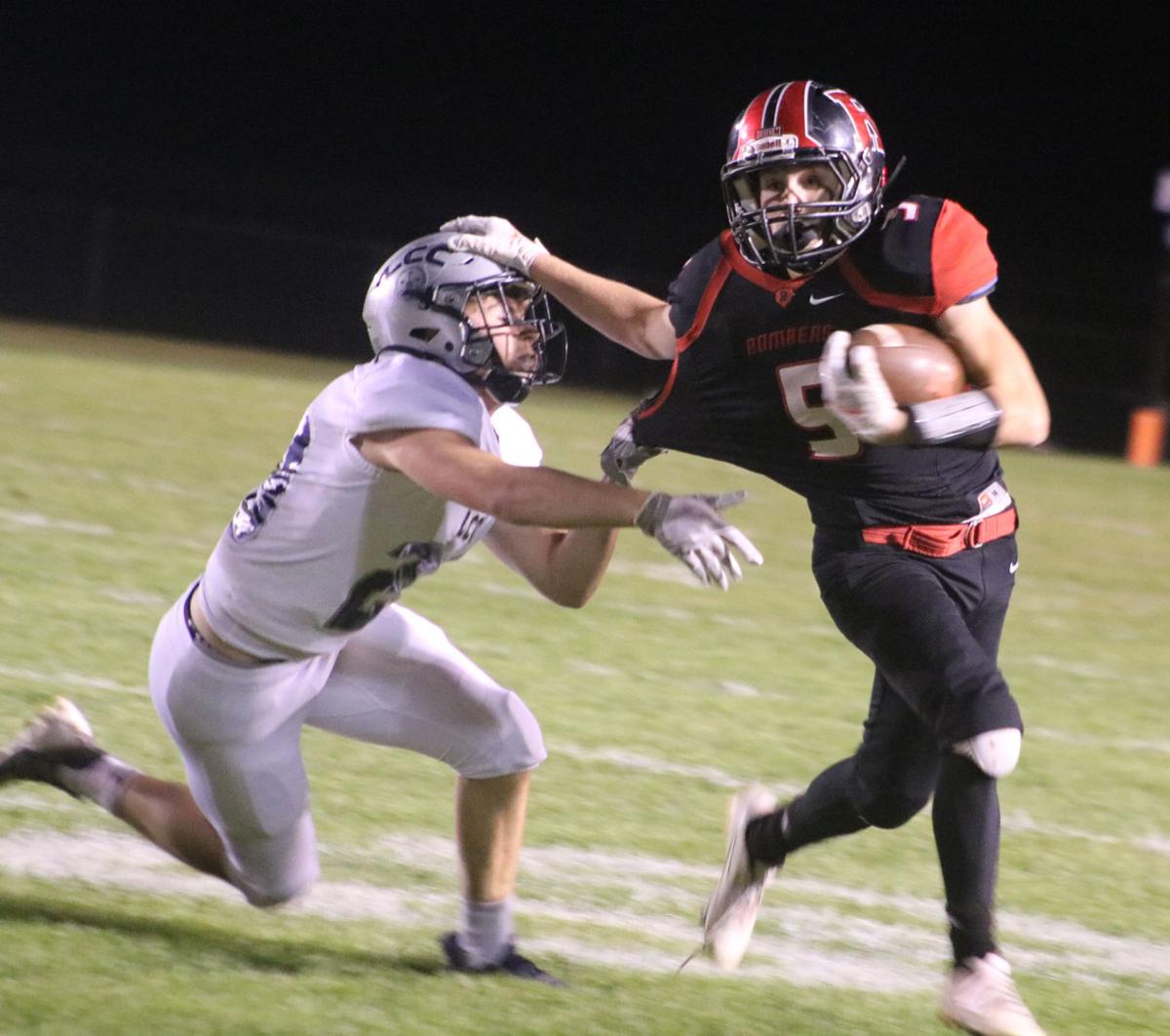 RCHS sophomore Aaron Barko holds off a Central Catholic defender to pick up a first down Friday. 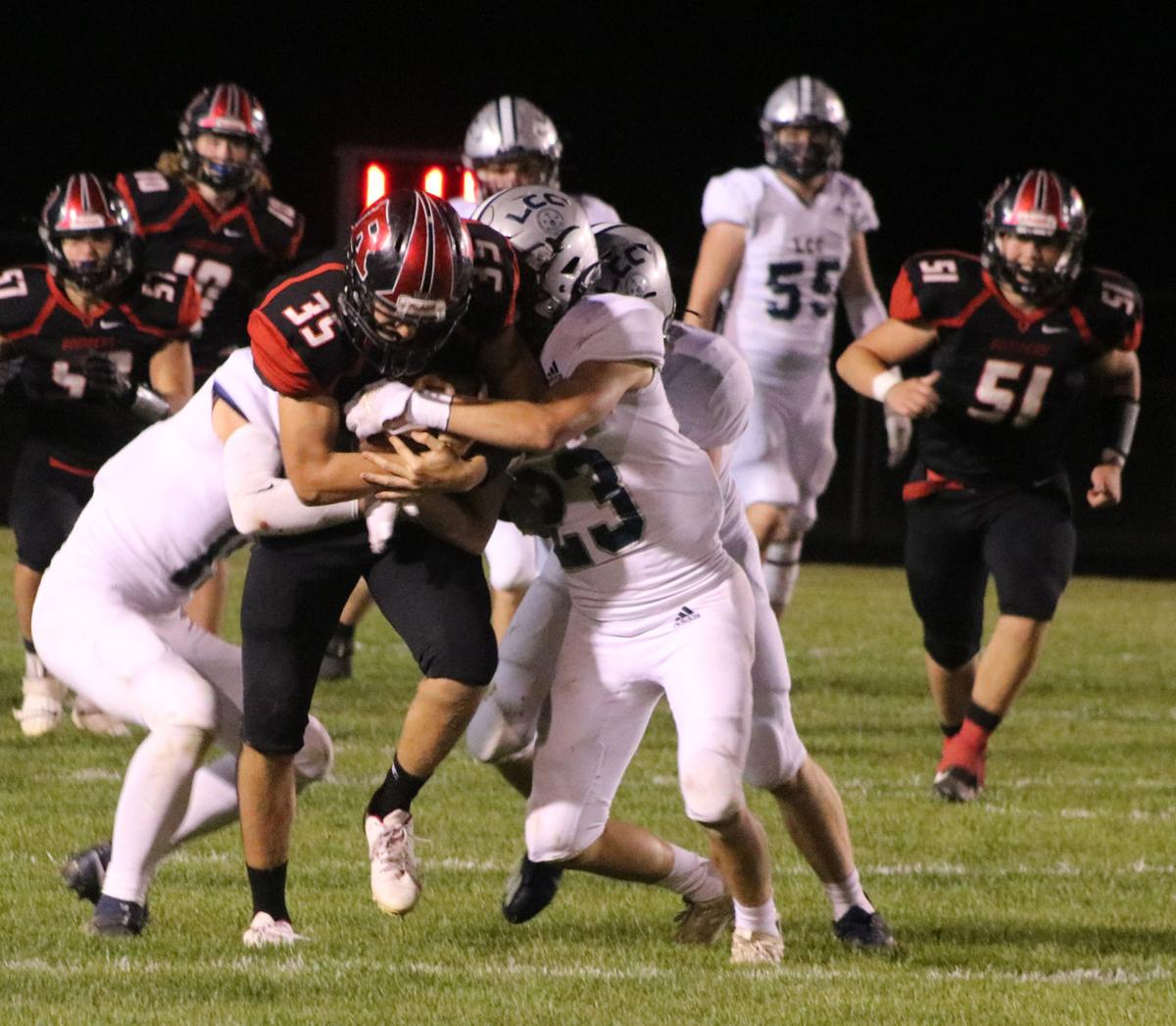 KVHS senior Kenseth Johns carries a pair of LCC defenders as he struggles for yardage Friday. 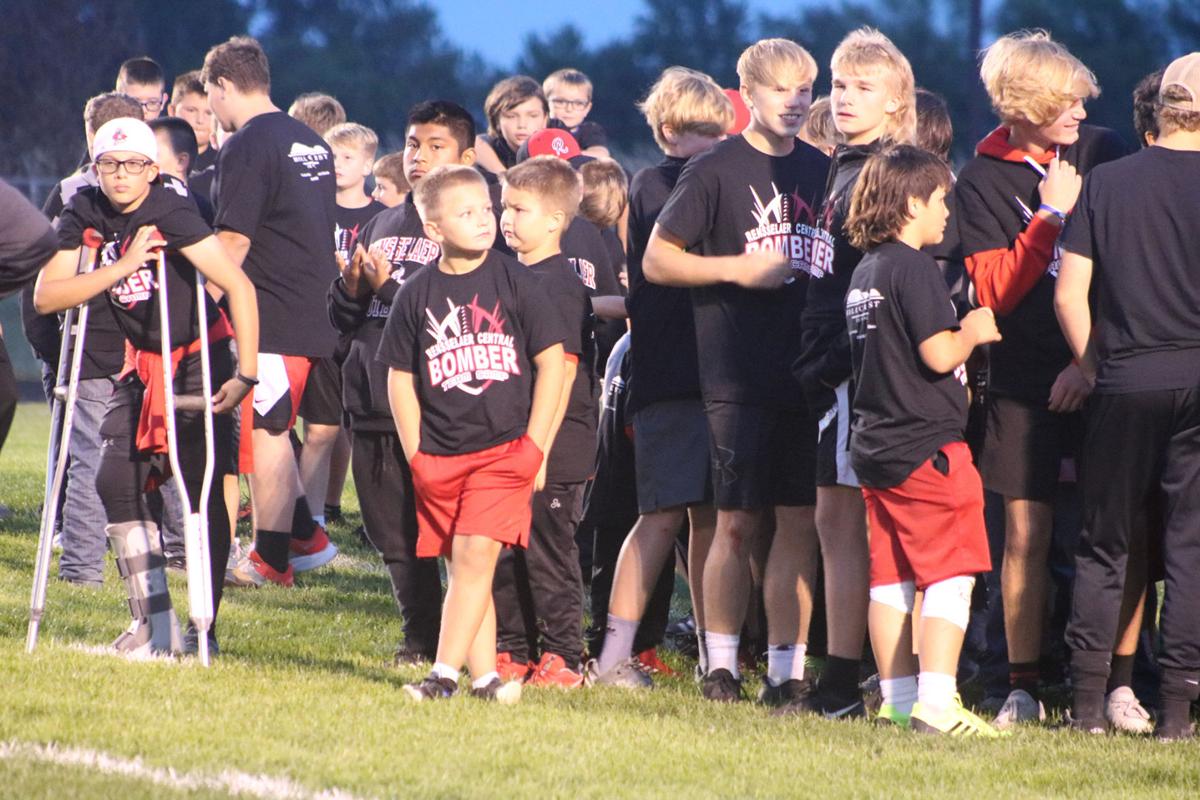 Youth football campers await the start of the Rensselaer Central/Lafayette Central Catholic football game Friday. The campers got the chance to participate in pregame festivities with the Bomber players. 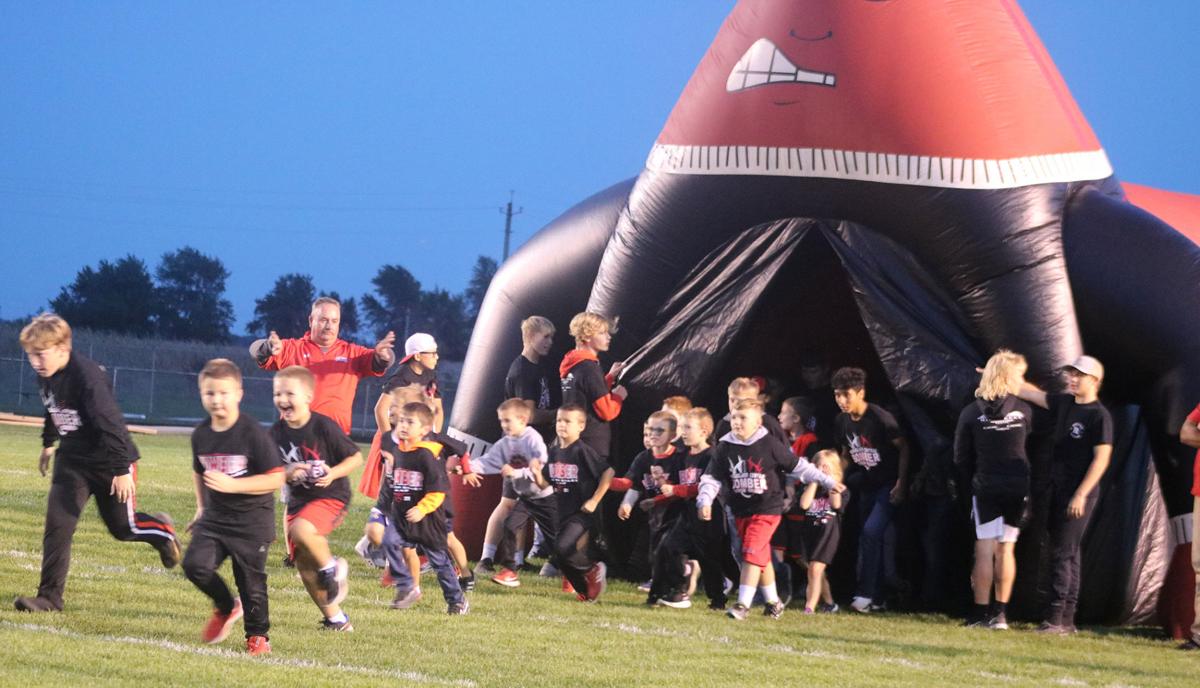 Participants in the Bombers’ youth football camps stream out of Bomber Bob during Friday night’s pregame. 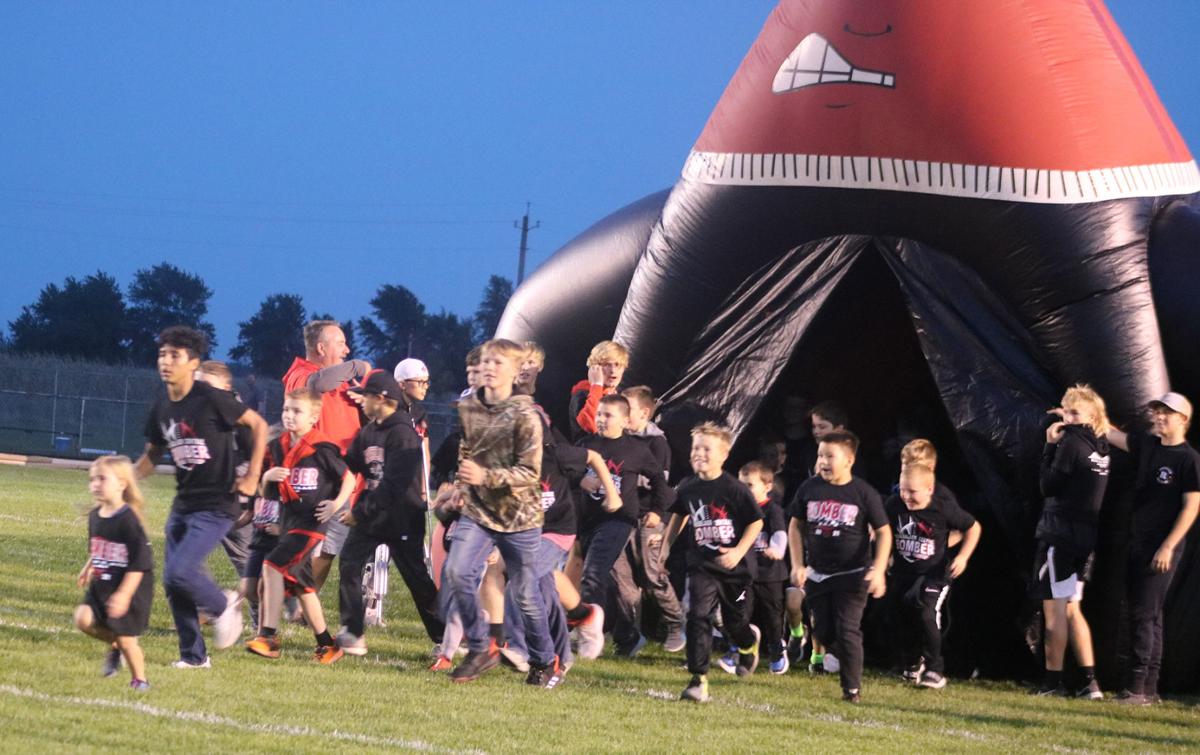 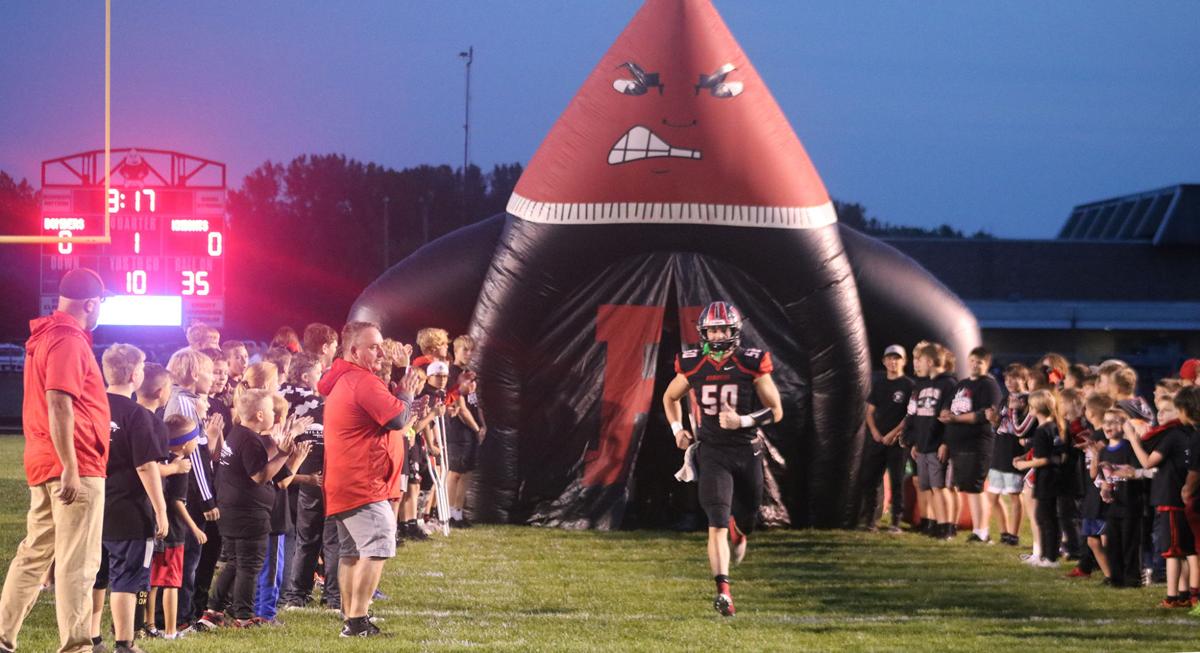 RCHS sophomore Aaron Barko holds off a Central Catholic defender to pick up a first down Friday.

KVHS senior Kenseth Johns carries a pair of LCC defenders as he struggles for yardage Friday.

Youth football campers await the start of the Rensselaer Central/Lafayette Central Catholic football game Friday. The campers got the chance to participate in pregame festivities with the Bomber players.

Participants in the Bombers’ youth football camps stream out of Bomber Bob during Friday night’s pregame.

RENSSELAER — Rensselaer Central had one of its key pieces back in the lineup Friday night against Lafayette Central Catholic.

And then it didn’t.

Senior running back Dylan Kidd, who was lost to the squad last week at West Lafayette due to contact tracing, played 13 snaps, including just six on offense, before suffering a lower leg injury that sidelined him for the rest of the night.

With their best offensive weapon out — Kidd averages 140 yards per game and is on pace for another 1,000-yard season — the Bombers appeared stunned and played like it in a 35-0 Hoosier Conference loss.

What was classified as a game that could go down to the wire by pregame pundits instead turned into a romp by the Knights. CC scored on three straight possessions in the first half to build a 21-0 halftime lead then scored on its first two possessions of the second half for a 35-0 bulge.

Due to the scoring margin, two minutes of the third period and the fourth quarter were played under a running clock. It’s the worst home defeat since the 2018 season when the Bombers fell to West Lafayette, 69-14.

It’s also the first time RCHS has been shut out in back-to-back games since the 2003 season.

That team would go on to finish 8-5 and win a sectional title.

The Bombers played without Kidd and another key two-way player, senior Kelton Hesson, in a 56-0 loss to West Lafayette last week. Hesson continues to recuperate from a lower leg injury and watched from the sideline again Friday night.

The loss of key personnel allowed a handful of the Bombers’ younger players, particularly freshmen, to see valuable varsity experience. Diego Hernandez-Reyes, a first-year player, filled in nicely for Kidd, while freshman tight end Brayson Johns had the team’s best play from scrimmage, taking a Tate Drone pass and rumbling 25 yards to get the ball inside CC’s red zone.

As many as four freshmen were on the field at the same time for RCHS Friday.

“Our coaching staff is excited with the kids coming up,” said Bombers coach Chris Meeks. “It’s a big difference between being a freshman and a senior. They competed hard and played the way we wanted them to tonight.”

The Drone-Johns pass play came on a fourth down call on Rensselaer’s first possession of the second half. Unfortunately for the Bombers, the scoring drive died out four plays later at CC’s 8-yard line.

The 13-play drive, which ended when Hernandez-Reyes was stopped for no gain on a fourth-and-3 play, chewed up nearly six minutes. The Knights (3-3, 1-1) would need less than two minutes to get their fourth score of the game when Clark Barrett hit Alex Hardebeck on a 5-yard slant and Hardebeck skimmed the sideline for an 87-yard touchdown.

Barrett completed 8 of 12 passes for 260 yards and three touchdowns. He had TD passes of 51, 38 and 87 yards and senior receiver Ty Buche had nine catches for 109 yards and a score.

Baylor Smith rushed for 86 yards on 18 carries. He capped the game’s scoring with a 2-yard TD run in the third period.

Hernandez-Reyes had 71 rushing yards on 21 carries and Drone completed 7 of 13 passes for 76 yards.

Defensively, Ky Risner had seven tackles for RCHS and Adam Ahler had four tackles with a sack of Barrett.

The Bombers return to action next Friday when they face winless Benton Central (0-4) on the road. They will travel to winless Northwestern (0-5) on Friday, Oct. 8 before hosting a Hoosier Conference playoff game on Oct. 15.

Meeks and his staff hope to have their team at full strength by the end of the year.

“We’ve got to work on getting everybody healthy,” Meeks said.