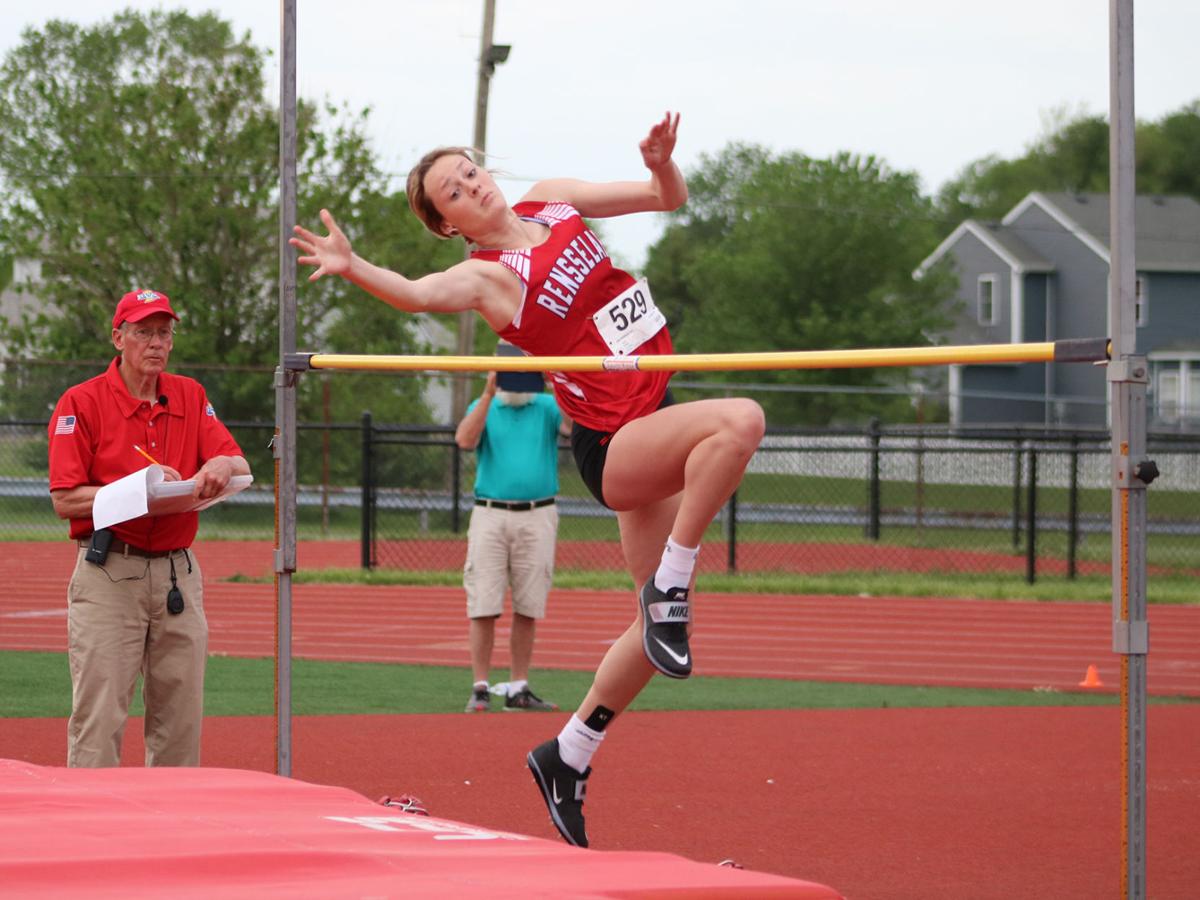 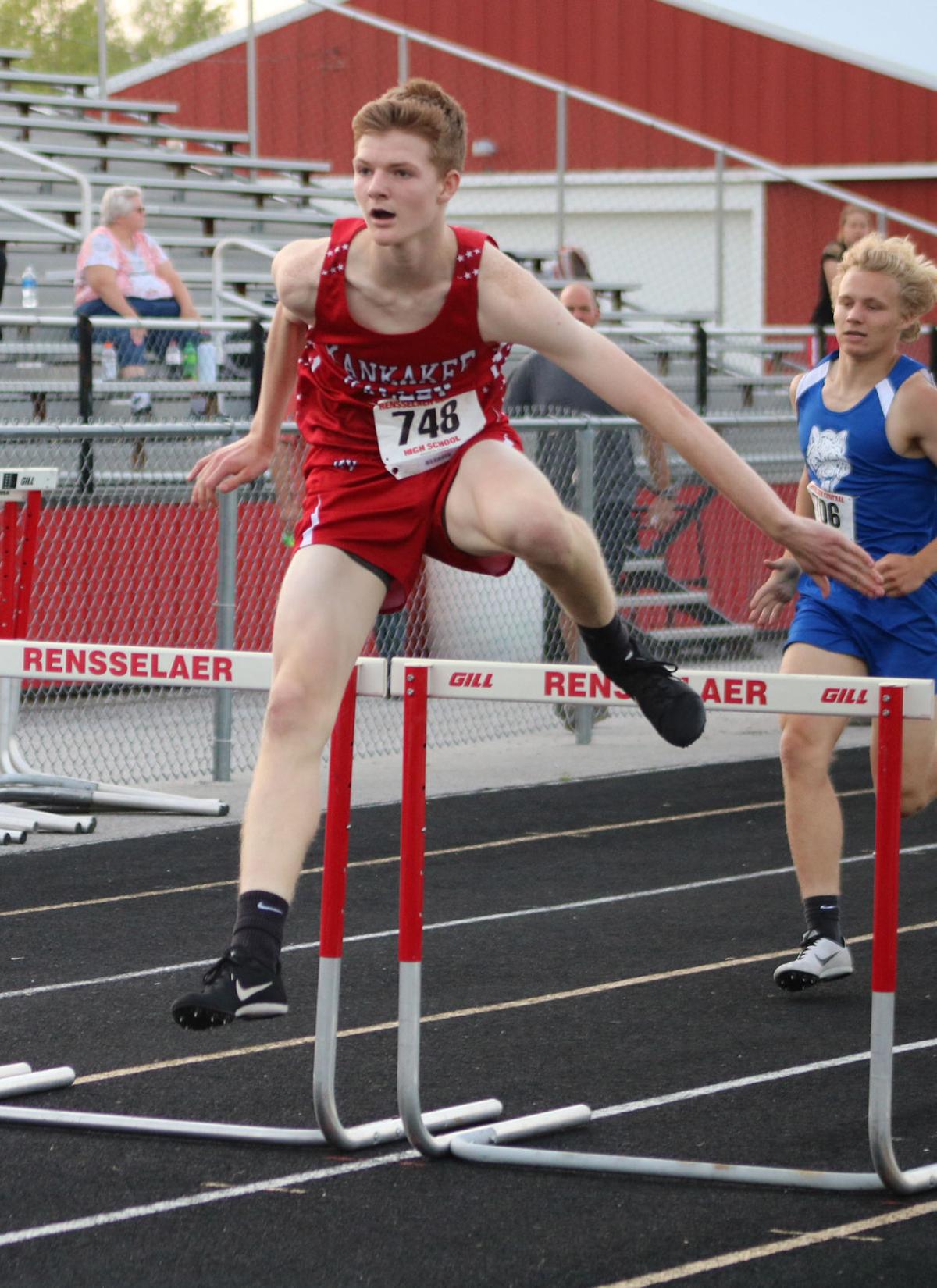 KVHS freshman Josiah Johnson will make one more run in the 300 hurdles Friday night before heading off to Texas with his family.

KVHS freshman Josiah Johnson will make one more run in the 300 hurdles Friday night before heading off to Texas with his family.

Then it’s off to Texas.

Johnson, who is the region’s top 300-meter hurdler in just his first year at KV, is one of five KVHS track athletes to qualify for the IHSAA state track and field meet, which will be Friday and Saturday at Ben Davis High School in Indianapolis.

Johnson won the 300 hurdles event at last week’s regional in Crown Point, finishing in a time of 39.88 seconds. He was the only freshman to compete in the event, which featured two sophomores, four juniors and nine seniors.

He is set to compete Friday night and will joined on the track by junior teammate Justin Hoffman, who qualified for the 3,200-meter run by placing second in the event at regional.

Once he’s run his race, which is scheduled for a 6:20 p.m., CST, start time, Johnson and his family will spend a night in a hotel in Indy before hitting the road Saturday morning for their trip to El Paso, Texas.

Johnson’s dad, Ryan, is a captain in the U.S. Army and has been assigned to Texas. The Johnsons remained in Jasper County this year so that Josiah’s sister, Hallie, could graduate with her senior class at KVHS.

Josiah said the move out of state won’t hit him until he’s done competing on Friday night.

“It’s pretty nerve-racking moving down to Texas,” he said. “It’s a much bigger state and it’s going to be a lot harder competition, which will hopefully improve me. But it’s mostly exciting, because I’m going to state in my first year.”

This is Johnson’s first year competing in the 300 hurdles. Standing 6-2 with long legs, Johnson is built to excel in both the 110 high hurdles — he’s the team’s top scorer in the event — and 300 hurdles.

“Since my eighth-grade season got canceled, I just picked up (the 300s) this year. Before that, I just ran the 110,” said Johnson, who also competed in the high jump, 400 meters and 4-by-400 relay for coach Tim Adams this spring.

It didn’t take long for Johnson to see he was made for competing in the 300s. He was unbeaten in the regular season and added conference, sectional and regional championships along the way.

“What helps me is that I’m good at hurdles, but also my endurance is stronger than most people I run against,” he said. “I can run the race longer and faster with the hurdles.”

Johnson is within a second of breaking KV’s 300 hurdles mark of 38.88. He finished 39.88 in winning the regional title last week.

He feels the competition at the state meet will only drive him towards a record-setting finish.

“Hopefully I can get in the 38s this time because a lot more people will be better than me. I think when people are better than me it pushes me to go faster,” he said.

Finishing in the 38s will likely put Johnson in elite company Friday night.

“Top nine place and I’m seeded 10th, so the goal is to hopefully place,” he said.

The thought of competing at the state meet in his one season at KVHS has yet to sink in for the lanky sophomore-to-be.

“I’m very surprised. It’s kind of weird to go there being a freshman. But God has given me a gift, so you’ve got to embrace it,” he said.

Hoffman, meanwhile, will also be competing in his first state meet by finishing among the top three in the 3,200 meters last week. His time of 9 minutes, 31.32 seconds was second only to Highland senior Lucas Guerra’s 9:25.61.Other athletes to compete in Indianapolis this weekend include:

Manns thought she might get a call-back to compete in the state meet after reaching the 5-3 threshold at regional. Twelve competitors at regionals throughout the state cleared 5-3, putting them among 30 jumpers who will compete in Indianapolis on Saturday afternoon.

The school’s record-holder in the high jump, Manns broke Jessica Luesse’s 17-year-old record of 5-2 at the KVHS sectional two weeks ago. She did it on her third jump at that height and needed just two jumps to reach 5-3 at last week’s regional.

Manns said Tuesday she hopes to finish among the top 10 jumpers at Ben Davis.

Manns will again have jumps coach Bill Zimmer in her corner on Saturday. She said he has helped her with her mental approach.

“I just have to get up and over and clear my mind before I jump,” she said of Zimmer’s advice.

Zimmer has also helped with Manns’ technique as she floats over the bar.

“I’m working on kicking my legs when I arch over the bar and driving up,” she said.

The plan is for Manns to enjoy the experience this year, work towards a PR and hope for a return trip in 2022.

“I’m going to take in all the experience there and work for it next year and try to get better,” Manns said.

This is the second trip downstate in three years for Schoonveld, who competed in the high jump as a freshman. She jumped 5 feet, 5 inches to finish seventh and earn a medal in her first trip.

At sectional and again at regional this season, she cleared 5-3, narrowly missing 5-4 at both KVHS and Portage. Until the post-season began, Schoonveld was soaring over the bar at 5-6.

“Most of the season I was clearing 5-5 and 5-6,” she said. “The past few meets, I’ve been a little bit overwhelmed with it, so I just need to calm down and do what I know I can do.”

Isabelle Jackson of Whiteland is seeded No. 1 in the high jump at 5-9, with Tacoria Humphrey of Warren Central No. 2 at 5-8. A jump of 5-6 would likely put Schoonveld among the top nine medalists.

“I’m hoping to get around my PR in high jump, around 5-6,” Schoonveld said. “I’m hoping to trim off a couple of seconds in the hurdles. I haven’t been pushed to my full potential yet.”

She is less than a second from breaking former all-state performer Jenna Jungels’ 300 hurdles mark of 44.20.

The team’s top 400-meter runner as well, Schoonveld said she and coach Lane Lewallen looked for a running event that would sync up better with her high jumping duties.

“My freshman year, I ran in the 400,” she said, “but it didn’t really time up with high jump and I ended up dropping out of the 400 at regionals. We tried to find an event that would work out better as far as timing. We talked about the 300 hurdles and it worked out pretty good.

“I was nervous to start them because I never ran them before, but I’m glad that I ran them.”

Schoonveld owns the third-best 300 hurdles time among state qualifiers. Reese Sanders of Indianapolis Cathedral is the top seed with a time of 43.91.

With the trip downstate in 2019 still fresh in her mind, Schoonveld plans to approach this year’s visit differently.

“Just try not be so nervous. Enjoy it,” she said.

Bell qualified to compete in the 1,600-meter run downstate after placing third in the event at the regional meet. Her time of 5 minutes, 22.21 seconds is among the top 27 best times in the state.

A superb distance runner in her first season, Bell nearly qualified for the state cross country meet in the fall. She has consistently been KV’s top distance runner, earning all-Northwest Crossroads Conference honors in the 1,600 and 3,200 meters last month.

Nannenga is also competing in her first state meet after clearing the bar at 5-3 at last week’s regional meet to finish second among 18 competitors. She cleared the height ahead of Schoonveld, who placed fourth, and Rensselaer Central’s Ariel Manns, who was fifth overall.

Nannenga has been consistent in her first full season as a member of the KVHS track team. Last year’s season was canceled due to COVID, denying Nannenga a shot at reaching the state meet in her freshman season.