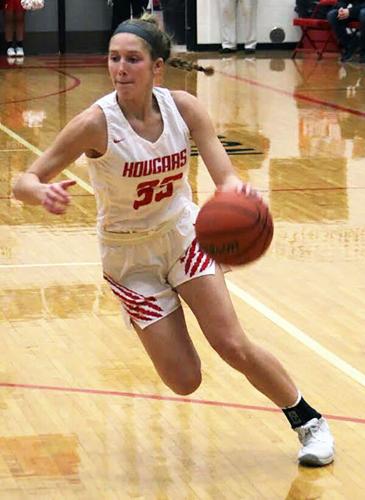 Lady Kougar junior Laynie Capellari takes off down court on a fast break. 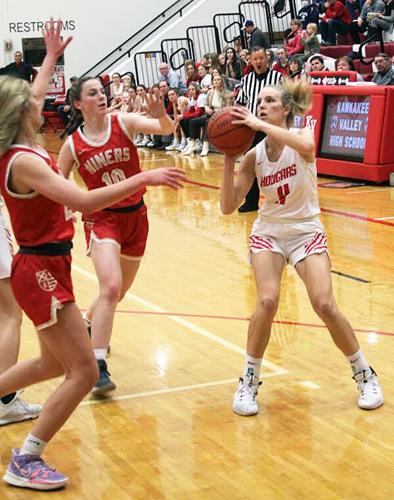 Lady Kougar junior Laynie Capellari takes off down court on a fast break.

WHEATFIELD — The Kankakee Valley girls’ basketball team was as cold as the weather against Andrean on Friday, Jan. 21, falling to the visitors 39-24.

The loss stung worse than normal as it assured that Andrean (16-6 overall) would repeat as Northwest Conference Champions and removed the Lady Kougars (14-7) from the running.

Andrean won the tip, but the KV pressure yielded two turnovers in the first two 59er possessions. In a foreshadowing of what was to come in most of the game, however, neither turnover led to points for the home team as the ball simply would not fall through the hoop.

The Lady Kougars scored exactly one point in the entire first quarter when junior Lilly Toppen sank the second of two free throws. Luckily for the Kats, Andrean was not faring much better, scoring only eight in that first frame.

Andrean would match that first eight in the second quarter while the lady Kougars came to life and netted 13 with eight of those points courtesy of Toppen, who hit two treys and a two. Kate Thomas also finally found the basket and Juliet Starr sank a long three.

The teams headed into halftime with Andrean up by only two at 16-14, giving hope to the large Kougar crowd.

After the break, KV again lost its momentum. The sum of its scoring was a lone basket by Toppen, who then missed the and-one free throw after being fouled on the way up. Thomas missed both of her free-throws attempts. Andrean scored its seven points in the quarter early and then also went cold.

The Lady Kougars, at one point shot four straight times and corralled the offensive lay-ups after each miss but still came away without any points.

In the fourth, Thomas gave it her best to pick up her team and did score six of their eight total points with Laynie Capellari hitting two from the charity stripe to round out the scoring. Andrean, however, put up double that with 16 to arrive at the final margin.

Throughout the game, the frustration of the missed shots shown visibly on the Lady Kougars’ faces and an audible groan arose from the crown each time a lay-up rolled around the rim and out.

The Kougars were just as cold at the free throw line, hitting just 50 percent while Andrean went 14 for 18 for 77.8 percent.

The Niners finished the conference portion of their schedule with a 6-0 record. KVHS finished tied for second with Highland at 3-2 in league play.

Munster was fourth at 2-3 and Lowell and Hobart were 1-4 apiece to tie for last place.