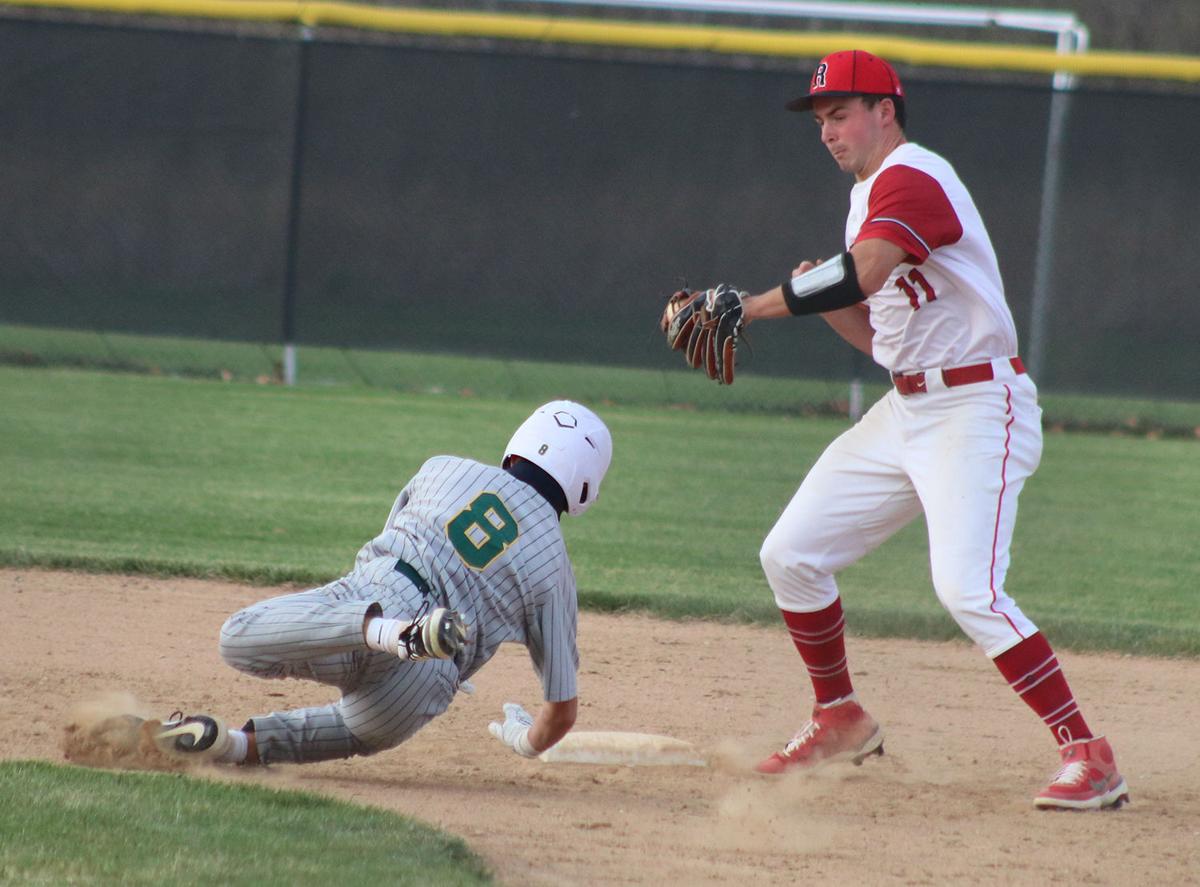 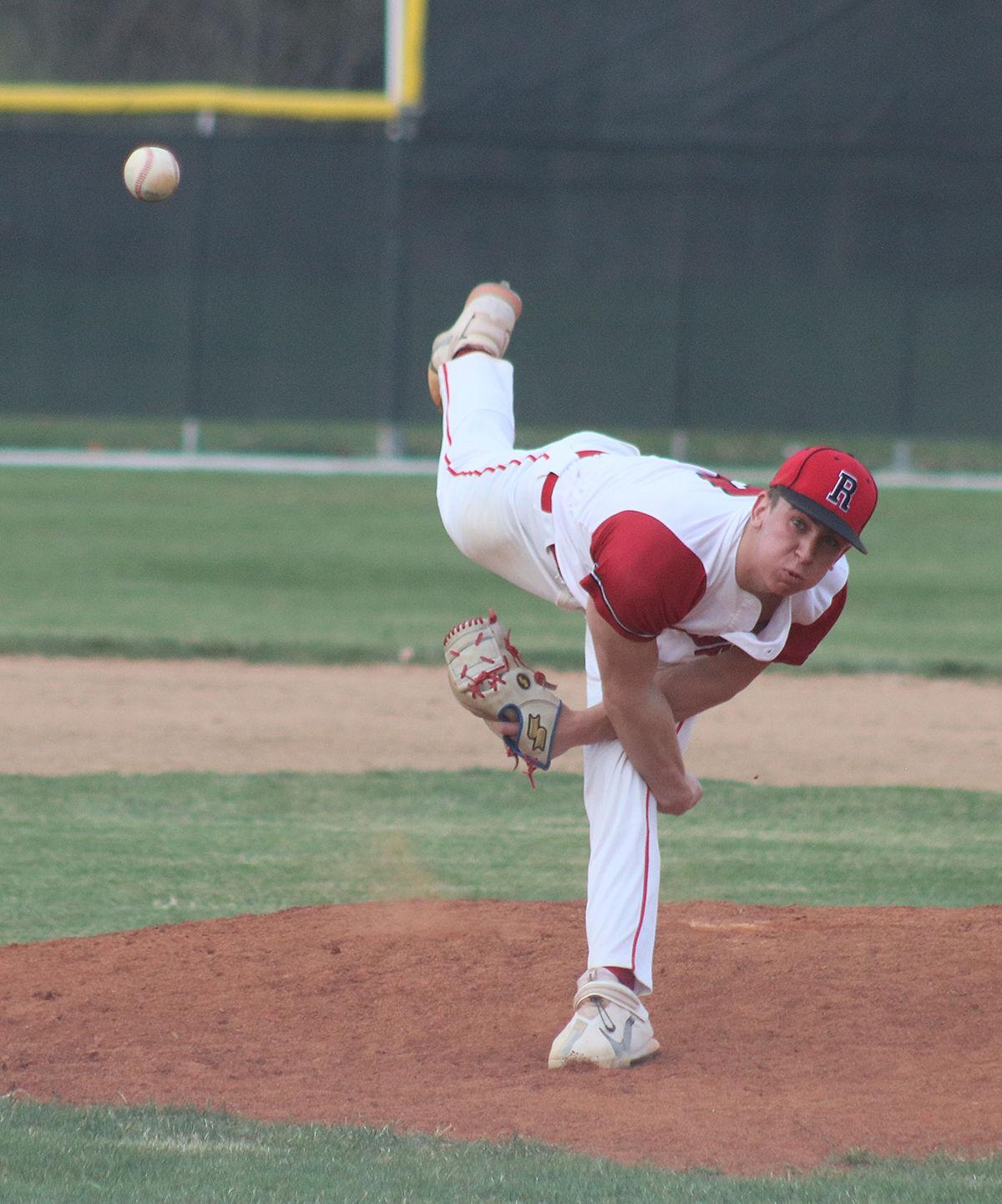 RCHS pitcher Teagan Brown gave up two first-inning runs, but settled in during the middle innings to give his team a chance vs. the Bison Tuesday. 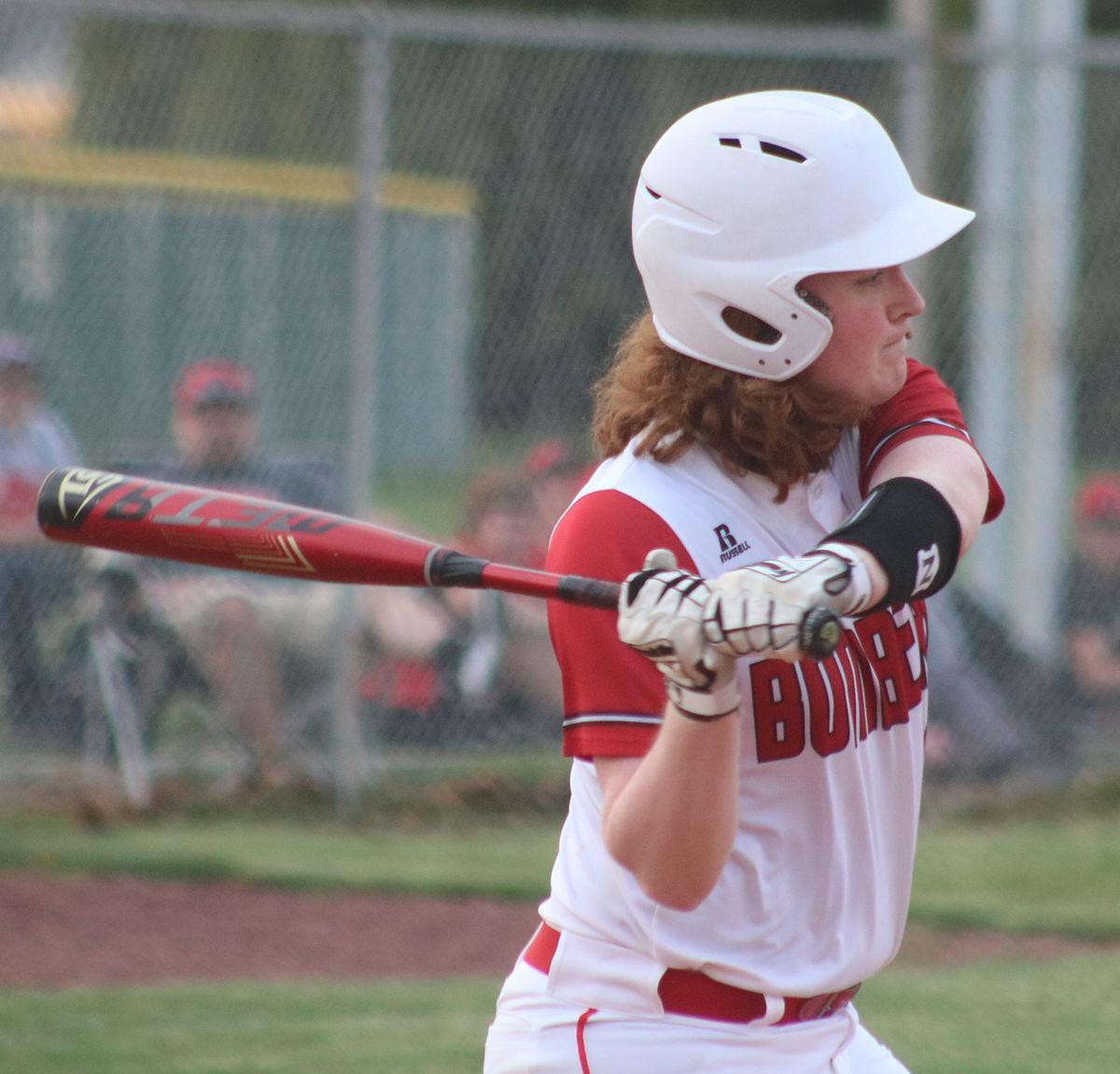 RCHS senior infielder/pitcher Grant Spangler serves as the Bombers' only senior this season. 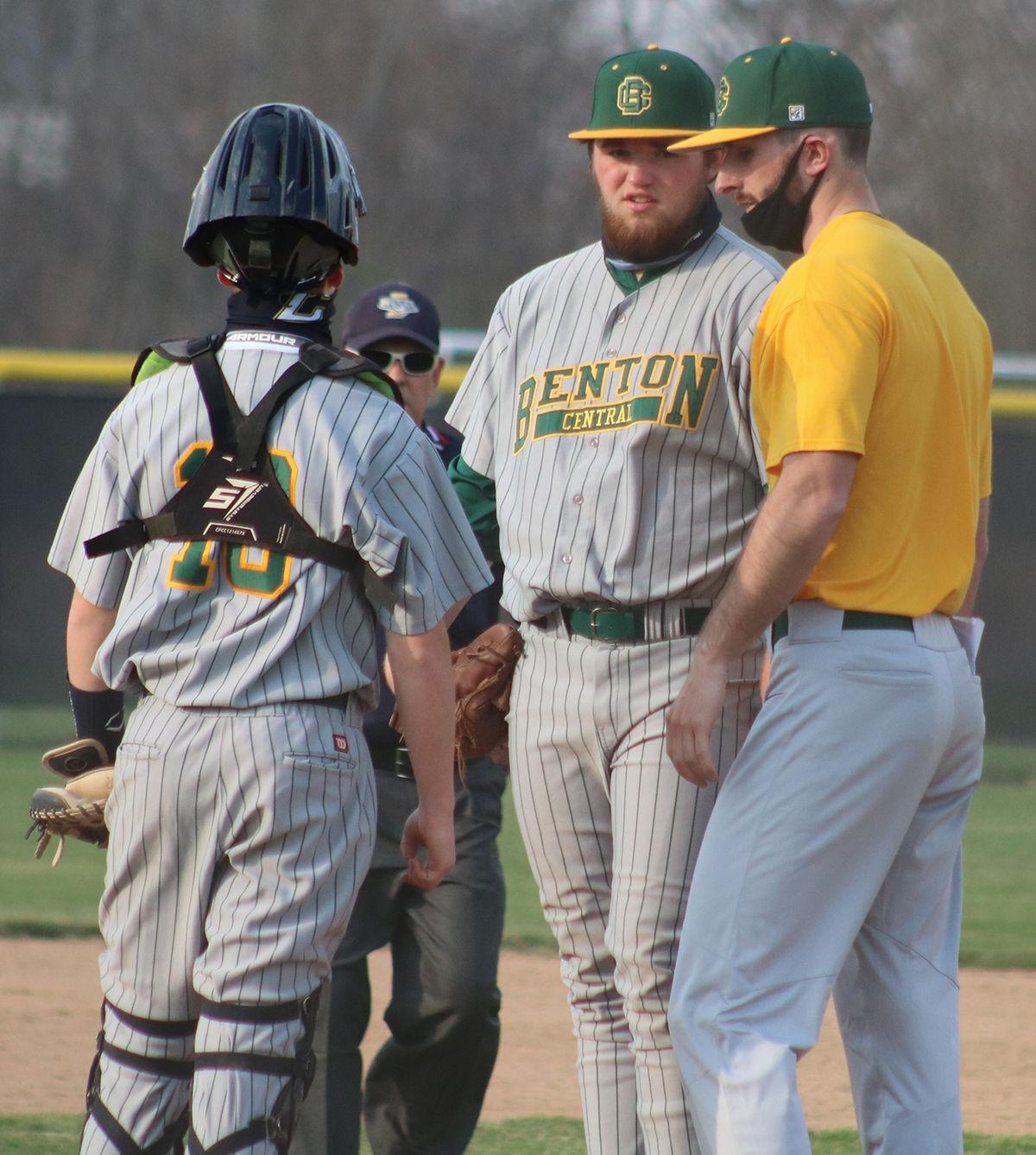 Former South Newton standout Jarrett Hammel is in his first season as coach of the Benton Central baseball program.

RCHS pitcher Teagan Brown gave up two first-inning runs, but settled in during the middle innings to give his team a chance vs. the Bison Tuesday.

RCHS senior infielder/pitcher Grant Spangler serves as the Bombers' only senior this season.

Former South Newton standout Jarrett Hammel is in his first season as coach of the Benton Central baseball program.

RENSSELAER — It’s only been two days, but Rensselaer Central has enjoyed a good jumping-off point to the 2021 baseball season.

The Bombers opened a busy April schedule with an impressive 12-3 romp of Hoosier Conference nemesis Benton Central on April 5, getting a cycle from junior Austin Francis, who also struck out 12 Bison in his first game as the team’s ace pitcher.

On Tuesday, April 6, the Bombers showed some fight for coach Matt Stevens, rallying from a 2-0 deficit to take a 3-2 lead.

But Rensselaer pitchers hung a pair of fastballs to Benton Central’s top run producer, senior Connor Hall, who deposited a pair of two-run home runs over the fence — first right then left — to give BC a come-from-behind 6-4 victory.

“Those were no-doubters,” Stevens said of Hall’s homers. “The first one might have been helped by the wind, but they’re home runs. What are you going to do? He had a pretty good game.”

Hall had three of his team’s five hits against RCHS starter Teagan Brown and relievers Jacob Pickering and Kenseth Johns.

Brown struggled to throw strikes early, allowing Hall’s two-run bomb to right field in the first inning. He found his groove over the next three innings, striking out four batters in a row in the second and third innings.

“He couldn’t find the strike zone early,” Stevens said of Brown. “He settled in and threw nicely after that.”

With Brown holding down BC’s offense, the Bombers were able to rally with a single run in the second inning on Tommy Boyles’ fielders choice groundout and two more runs in the third.

An infield error allowed Lakin Webb, who opened the third with a single to right, to score and Pickering, who walked, came home later on a wild pitch from Bison starter Nick Fry.

That gave the Bombers a 3-2 lead, which held up until the sixth inning when the Bison got one-out singles from Jacob Meredith and Landon Brighton off Pickering, who relieved in the fifth inning, and tied the game on an infield error.

A sacrifice fly RBI by Kyle Musser plated Brighton with the go-ahead run at 4-3.

But the Bombers answered back with the tying run in the bottom of the sixth. After Boyles reached on an error, he moved into scoring position on a sacrifice bunt by Kelton Hesson.

Boyles then sprinted to third on Lakin’s groundout to the shortstop and scored two pitches later when reliever Dalton Rennaker uncorked a wild pitch.

Stevens praised the play of Boyles, whose hustle to third base led to the tying run.

“He’s been a great find for us so far,” Stevens said. “He’s playing great. It was a question mark we had: who’s going to be that guy in left field? He came out game one with a couple of hits. He’s instinctive and reads the ball well.”

In the top of the seventh, Stevens pulled Pickering, who walked Jesse Stout to start the inning, and brought in reliever Kenseth Johns.

Johns got behind Hall two balls and a strike before the Bison senior launched a hanging fastball over the left field fence for a 6-4 lead.

Johns was able to limit the damage, however, striking out two of the next three batters to give his team a chance in the bottom half.

“He makes a bad pitch, the kid capitalizes on it, you tip your hat and move on,” Stevens said of Johns. “He did a great job after that.”

The Bombers did get a runner on base with two outs in the seventh, but Rennaker struck out Johns to end any drama.

Rensselaer had four hits on offense after collecting 11 hits a day before. Webb was 2 for 4 and Grant Spangler, Francis and Pickering had hits.

“We’ll find some holes,” Stevens said..”We had some chances to score some runs, but we didn’t take advantage of it. I’m happy with the way we ran the bases and I’m happy with several things we’re doing right now.”

The Bombers’ lineup is loaded with juniors, including two players — Francis and Johns — who played as freshmen. The lone senior is Spangler, who has two years of varsity experience.

In contrast, the Bison have nine seniors, including seven starters.

Bombers to build on solid start to baseball season

Now that his team has two games under its belt, Stevens has a sense of what he has moving forward.

“We’ve got some work to do and we’re not perfect, but we’re making strides in the right direction,” he said. “These kids are working hard and I can’t ask for more.”

It appears the Bombers will have pitching depth. Stevens used four pitchers over the first two games, including Pickering twice in relief roles. He was encouraged by the way Pickering, Johns and Brown battled on Tuesday.

Francis, meanwhile, took a giant step forward with his outing on Monday.

“We’ve got four guys and that doesn’t include Grant Spangler and Kelton Hesson, who can also throw,” Stevens said. “We’ve got a lot of velocity, we’ve got guys who can throw strikes. It’s really nice to have a deep pitching staff and that will come in handy when we get into the middle of the season when we play a bunch of conference games in a row.”

Offensively, Stevens said he would like to see his players stay aggressive at the plate, much like they did in Bombers’ first game with BC. It appears the Bombers have the ingredients to play some small ball this season.

“We’re going to bunt people over, move people around,” Stevens said. “Our conference is tough so we’re not going to steal a lot of bases with a lot of good catchers. We’re going to manufacture some runs, but we’ve got guys with some power. We’ve got guys who can hit gap to gap.”

With the COVID-19 pandemic cancelling the 2020 season, several of the Bombers stayed sharp by playing some travel ball last summer and early fall.

“These juniors have played a lot of travel ball baseball and know what to do,” Stevens said. “Personality-wise, it’s a great group to coach, too. They’re like sponges. Having a year off, they’re eager to get back out here and play again.”

Stevens said he expects Spangler to be at the heart of how the Bombers perform this year. Spangler has been in RCHS’s lineup since his freshman season and provides veteran leadership.

“Grant has done a good job being a leader and he gives us really good at-bats,” Stevens said. “He knows what he’s doing out there and knows the game. We’re going to miss him next year, but I’ve got all of those juniors and sophomores coming back. It’s kind of a feeling out year; teach these guys the best we can and have them get better game by game by game. I think we could be really good this year. But watch out next year with all of these kids coming back.”

The Bombers’ everyday lineup will feature six juniors, two sophomores and a senior this spring. It’s still too early to see how all the pieces will fit into place, Stevens said.

“I think it’s going to be a good year,” he said. “I think we’re going to make some noise. Nobody really knows what we have. Benton Central knows now and the rest of the conference will see how we can play them tough. They’re going to be ready for us.

“But by no means are we in mid-season form yet. We’ve still got some things to work on. But the more field time they get, the more they’ll get better as we build towards sectional. As I’ve told every team I’ve coached, it’s not how you start, it’s how you finish. It was a great start last night (April 5), but we’ll keep plugging away; take it one game at a time.”

Tuesday’s victory is the first for Benton Central coach Jarrett “Jet” Hammel, who starred at South Newton and later at Saint Joseph’s College and Valparaiso before taking over the Bison program this winter.

Hammel said he will take all that he has learned from his previous coaches, including Rebels basketball legend Mike Hall and SJC Hall of Fame coach Rick O'Dette, as he guides the Bison over tough terrain this spring.

“I’ve learned so much from my previous coaches, going back to South Newton with coach Mike Hall,” Hammel said. “He was always instilling putting in your best effort every day, try to reach your maximized potential. I go to Saint Joe and coach O’Dette. He holds you accountable. He’s instilled so many traits as far as never let a relationship go stale with somebody because you never know if you’ll need their help. Then I went to Valpo after Saint Joe closed down and coach (Brian) Schmack instilled me to be a man and always own up to your mistakes.

“I’m just trying to mold the Benton Central baseball program all-around into better men. Not just athletes, but better men moving on; fathers, husbands, great citizens in our community. Baseball’s great, winning’s great, but I’m trying to make them a classy group that Benton Central is known for.”

Hammel, who teaches in the Benton Central School Corporation, was encouraged to see his team bounce back from a tough loss against RCHS the previous day. He encourages them to get better every day as they point to the conference and sectional.

The Bison roster features nine seniors, all of whom should make contributions this spring. Many of them have varsity experience, including Connor Hall, who hits in the middle of the lineup. The others are Rennaker, Fry, Jacob Meredith, Landon Brighton, Casey Hallenbeck, Cael Williams, Kyron Deno and Jackson Frazier.

“It’s nice to have some veteran leadership. I’ve got guys who been here for a few years, but I’ve got guys who didn’t have a junior year,” said Hammel, who was an all-state pitcher for the Rebels. “They went from sophomores to seniors, from underclassmen to the big dogs, so it is different. Nick Fry and Jacob Meredith have been there since day one and they’ve taken everything in their hands and taken leadership.”

The Bison also field 12 freshmen, including two — Tyler Klemme and Dylan Musser — who earned starts against the Bombers Tuesday.