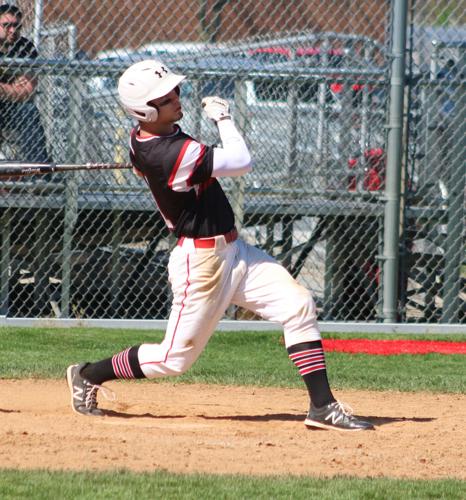 Rensselaer Central banged out 13 hits in a 12-9 win in game two on Saturday, including a 4 for 4 performance by lead-off hitter Kelton Hesson. 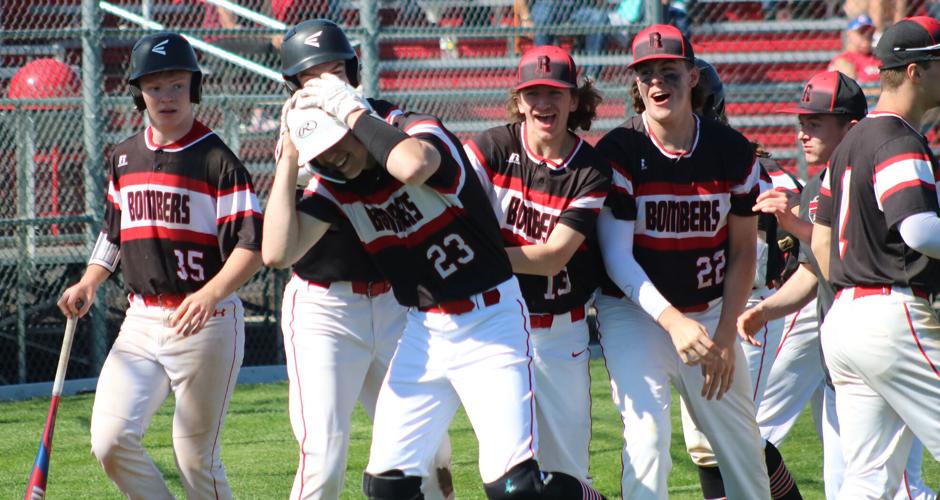 RCHS freshman Brayson Johns squeezes through a gauntlet of teammates after bashing a three-run home run against KV Saturday.

Rensselaer Central banged out 13 hits in a 12-9 win in game two on Saturday, including a 4 for 4 performance by lead-off hitter Kelton Hesson.

RCHS freshman Brayson Johns squeezes through a gauntlet of teammates after bashing a three-run home run against KV Saturday.

WHEATFIELD — Rensselaer Central baseball coach Matt Stevens believes his team might be rounding into shape with the sectional tournament just two weeks away.

On Saturday, the Bombers put together impressive at-bats and got solid pitching from a pair of seniors in sweeping a doubleheader at rival Kankakee Valley.

Senior right-hander Jacob Pickering gave the Kougars (6-12) very few scoring chances in a complete-game effort in game one. Leading just 3-2 entering the top of the seventh, the Bombers (6-10) exploded for six insurance runs in a 9-3 victory.

In game two, senior righty Kenseth Johns overcame a pair of miscues in the infield to go five-plus innings in his team’s 12-9 comeback victory. The Kougars took a 5-0 lead in the first inning, with three of the runs earned.

KV managed four hits against Johns, who struck out four and walked five over 5 1/3 innings. Junior Cohen Craig got the save, allowing a run on two hits over 1 2/3 innings of relief.

“What I was really happy about is we get down 5-0 and Kenseth settled in, we clawed back in and then we took the lead. Never say die and they just kept fighting all the way to the end,” Stevens said.

The Bombers started the season with Austin Francis and Teagan Brown as possible 1-2 pitchers. But Brown has a sore arm and Francis is no longer on the team, giving both Jacob Pickering and Kenseth Johns a chance at the team’s top two spots.

“The last time he pitched, Kenseth was neck-and-neck with the West Lafayette kid who threw a no-hitter. It was a 1-0 game going into the sixth. He’s pitched really well this year and Jacob has been throwing strikes. When I run him out there whether it’s as a starter or in relief, I know he’s always going to be around the zone. And he has the velocity and a good enough curveball to keep hitters off-balance.”

Trailing 12-9, KV did manage to put two runners on in the bottom of the seventh inning, but RCHS executed a 6-4-3 double play to end the game.

The game’s big blow came in the top of the sixth inning when freshman Brayson Johns banged a three-run home run off KV’s scoreboard in right field. That gave the Bombers a 12-4 lead.

KV did respond with three runs in its half of the sixth, but couldn’t cut into the lead despite putting two runners in scoring position against Craig.

Brayson Johns’ homer was his first varsity hit of the season. An injury kept him out of the lineup until earlier in the week.

“His first games were the West Lafayette games and we faced two of the best pitchers we will face all year long,” Stevens said of his freshman outfielder. “I told him after those games, ‘don’t get discouraged. Those are the best pitchers we’ll see. Everybody after that is going to be a little easier for you to handle.’ We all know he can hit. We knew he could do something like that.”

Stevens also recently welcomed back junior Tommy Boyles from a knee injury that kept him out of the lineup for 10 games and five other players who violated school policy.

With the Bombers trailing 5-1 in the third inning of game two, senior Kelton Hesson ignited his team’s offense, going 4 for 4 with a home run, two doubles and a single. His home run in the top of the fifth inning was part of a four-run outburst by the Bombers, who tied the game at 5-5 with single runs in the second and fourth innings and a three-run third.

Kenseth Johns, meanwhile, quieted KV’s bats over three innings of work to give the Bombers a chance at stealing the lead. Kenseth was also one of eight Bombers to collect hits. Besides four hits from Hesson — who attempted to stretch a double into a triple in his pursuit of a cycle only to be called out on a close play at third base in the sixth inning — senior Lakin Webb was 3 for 5 with an RBI and two stolen bases, senior Teagan Brown added an RBI single and Jacob Pickering and Brayson Johns had two hits apiece.

“Kelton Hesson had a great day,” Stevens said. “And he was safe at third to get the cycle. He’s the fastest guy I have, and he and maybe Teagan Brown, I would have tried to get to third on that. I was sure he was going to get there and he was safe.”

After sending a drive into the right centerfield gap, there was little doubt Hesson had his sights set on a triple.

With Pickering mystifying KV hitters in game one, the Bombers were able to maintain a one-run lead through the first six innings. RCHS seized control of the game with a six-run seventh to snap KV’s three-game win streak.

Kenseth Johns was 2 for 5 with three RBIs and Jacob Pickering had a double among his two hits. Webb added a two-run single and scored two runs and Brown had an RBI hit.

It’s been a difficult season for the Bombers, who have dealt with adversity since the first pitch of the season. They lost several close games while they waited for players to heal up and others to return to the lineup.

“The beginning of the season, we got down a lot,” Hesson said. “It’s kind of hard to come back from losses like that. It’s good to get two wins today.”

Stevens felt his team would slowly build momentum as the Bombers began folding in their veteran players.

“Because we’ve had injuries and we’ve had other issues with kids not being on the team and all of that, we’re finally getting guys back off injuries and back into the lineup. This is more like the team I expected to have, but we had issues early that we had to take care of,” he said.

“Now we can get the ball rolling a little bit, keep that aggressive nature at the plate, throw strikes on the mound and I think we’re heading in the right direction for sure.”