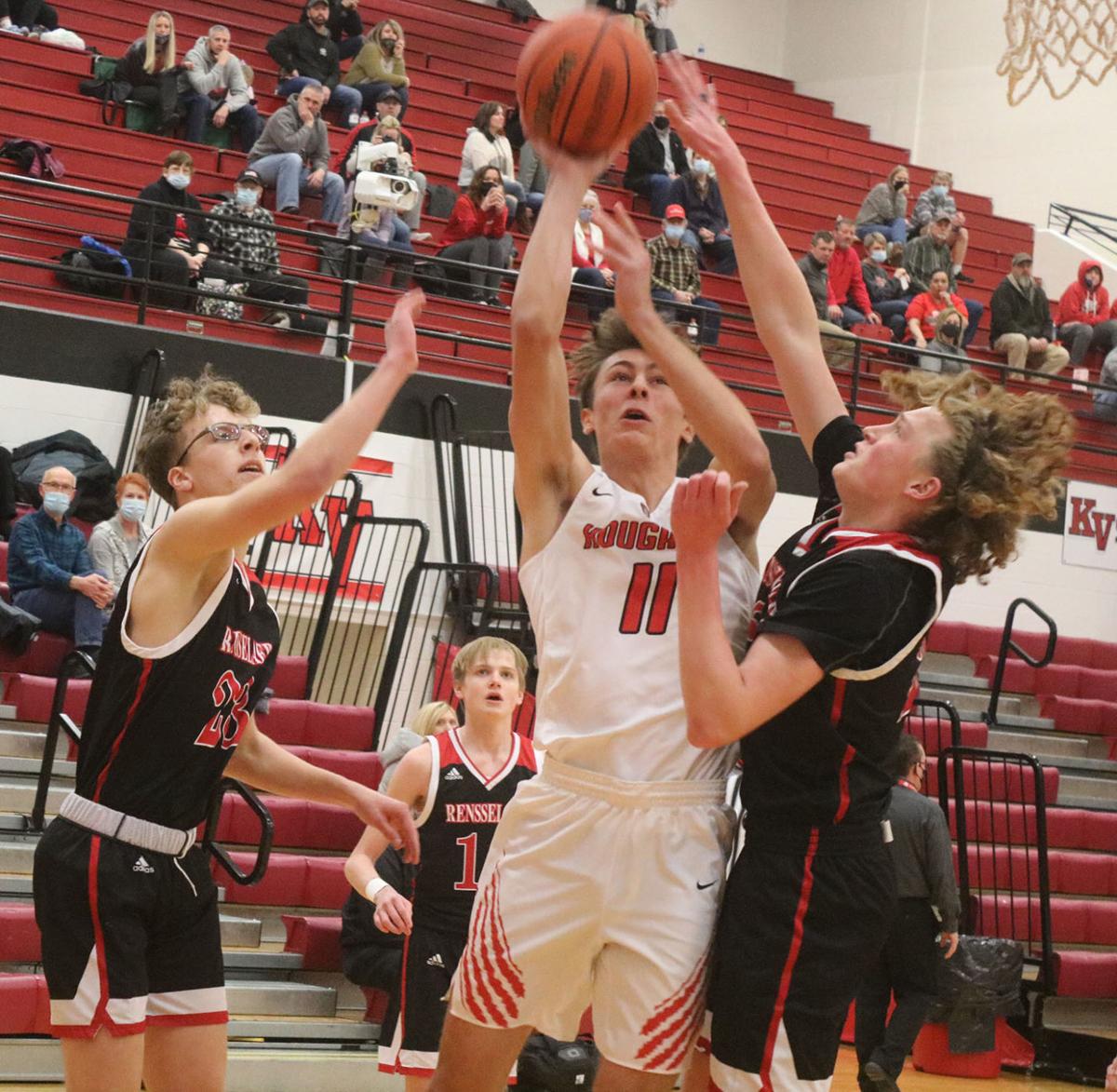 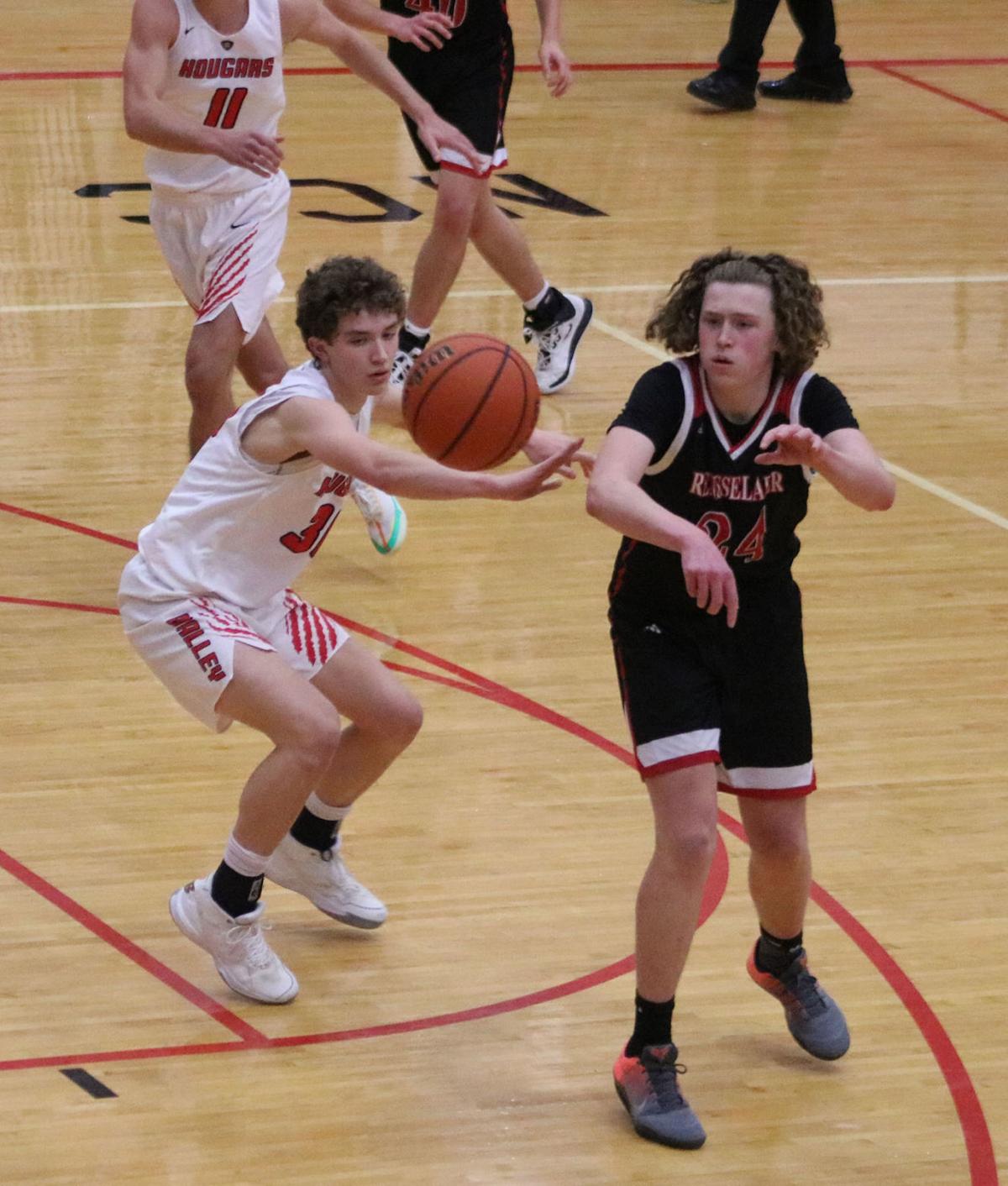 RCHS junior Tate Drone (right) flirted with foul trouble for most of the second half, but still managed 20 points in his team's win.

RCHS junior Tate Drone (right) flirted with foul trouble for most of the second half, but still managed 20 points in his team's win.

WHEATFIELD — A fall-away 3-point basket. A 3-point basket while floating sideways. A circus shot that rolls over the rim and into the net after a hard foul.

Rensselaer Central had all the shots working at Kankakee Valley Thursday at the Kougar Den.

It resulted in an exciting 87-74 win for the Bombers, who had perhaps their best offensive game of the season. They hit 10 of 14 shots in the pivotal third quarter, scored 53 second-half points and finished 19 of 25 from the free throw line in maintaining a double-digit lead in the fourth quarter.

“Teams tend to do that to us,” KV coach Bill Shepherd said. “Tonight, they just hit everything they threw at the rim. On our end, we missed a lot of easy shots and had shots roll out or it would have been much closer. And we still scored 74 points.”

It was the eighth win in nine games for the Bombers (10-8), who finish the season with four games in seven days.

KVHS, meanwhile, has lost four of six to fall to 7-12 on the season.

The Kougars had a lead midway through the second period after Hayden Dase banked in a shot underneath the basket to give his team a 23-18 lead.

“That’s a tough team,” Bombers coach Chad Pulver said. “They’re very athletic. They’re big. They passed the eye test and made it hard for us tonight. I think what was important was we weathered things early then faded at the end of the first quarter and into the second. We had to get our legs under us, we had to regroup and rethink some things. Once we figured out what would work, we did a pretty good job of working together. I thought we shared the ball really well tonight.

“The guys hitting open shots really helped get us going.”

Indeed. The Bombers answered with a 12-0 run to take a lead they would not relinquish. Junior Tate Drone scored all eight of his second-quarter points during the run, including a pair of free throws to kick-start the offense and three straight baskets to cap the spurt, giving RCHS a 30-23 lead.

The middle of the Bombers’ run included baskets by senior Josh Fleming and sophomore Tommy Boyles.

KV did close within four points of the lead at halftime, but the Bombers’ scored 26 points in the third quarter for a 60-47 lead. They hit five 3-pointers in the quarter, including three by Fleming, and an 8-2 run to push their lead into double figures.

The Kougars pulled within seven points twice in the fourth quarter, but Rensselaer extended its lead behind strong free throw shooting. The Bombers were 4 of 7 from the floor and scored 19 points from the foul line, including an 8 of 9 effort from Fleming.

“This is our best offensive game of the year,” Drone said. “We got a little bit shaky in the fourth quarter on defense, but we pulled it out.”

After a slow start, Fleming scored 19 of his team-high 26 points in the second half. He added five steals and three assists.

The Bombers began the game with high energy which resulted in involving everyone in the offense.

“It’s a rivalry game,” Fleming said. “You came out with energy, and you’re feeling your teammates. When they shoot it, you know when they’re going in. It’s just confidence, especially with the way we were rolling tonight. Tate was hitting 3s, Colby was hitting everything he threw up. It was a fun game, a high energy game.”

KV’s talented junior Nick Mikash also had 26 points and added nine rebounds. He was 12 of 21 from the floor and had two of his team’s three 3-point baskets.

“Mikash is a strong kid and knows how to play and he did really well for them,” Pulver said. “He caught us out of position a lot and they were able to get some high-low feeds we wish didn’t happen, but they were able to keep themselves in the game with that.”

Drone had 20 points and seven rebounds despite playing with four trouble for the Bombers. Sophomore Colby Chapman added 18 points with four steals and three assists, Jacoby Tiede-Souza added 11 and Boyles had 10 points.

“Colby and Josh were making everything,” Drone said. “They would make them in practice every time and it’s good to see if come over into the game. They carried the fourth quarter, just making all their shots.”

Drone bodied up on Mikash most of the night, but three fouls midway through the third quarter had him on the bench. Fortunately for the Bombers, they were able to maintain the lead with Drone on the sideline.

“When I got three fouls, I tried to tone it down a bit,” Drone said. “I was trying to go for blocks and stuff, so I needed to tone it down. And I did. I think I picked up one more foul in the fourth quarter.”

For the Kougars, senior Eli Carden and junior Will Sampson had nine points each. Luke Andree, a junior, had six rebounds.

The Kougars tried to funnel Fleming into double teams in the first half, which allowed Drone to roll to the basket for shots at the rim.

“I had a feeling they would do that because they did the same thing to the Hebron point guard,” Fleming said of KV’s defense. “I knew when Tate set a screen they were going to jump me and Tate was open the whole first half. When he’s open, I’m going to get it to him because he can finish.”

Turnovers and the inability to get loose balls hurt KV’s chances to keep pace with the Bombers. Shepherd was reminded of one play where Rensselaer’s Brody Chamness air-balled a 3-point shot with the ball falling between a pair of KV teammates. But neither player could corral the ball, which bounced to a Bomber player on the perimeter.

“We couldn’t get out of our own way. We were our own worst enemy. We’d get a turnover, push it up the floor and throw it away. We score a basket on our end then don’t get back on defense and they score right away on the other end. When we do those things, it’s difficult for us to win.”