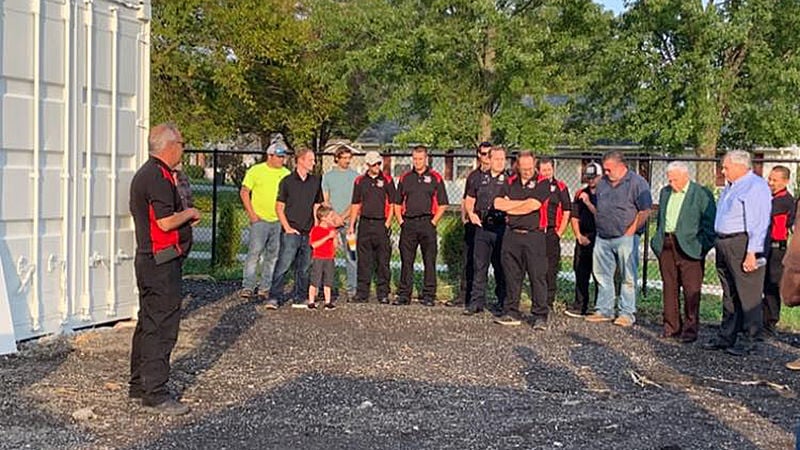 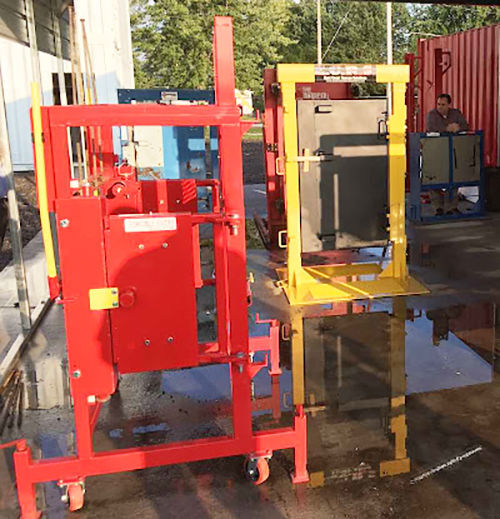 Rensselaer’s training facility for fire and police departments features a series of door props that present a number of challenges in forced entry.

Rensselaer’s training facility for fire and police departments features a series of door props that present a number of challenges in forced entry.

Besides holding an open house and visiting local schools to give students basic fire prevention tips throughout the week, RVFD firefighters and chief Kenny Haun dedicated its training facility behind its fire station on Oct. 5.

The training area features a building with several rooms that will allow firefighters to simulate batting blazes in each room. There is a kitchen, bedrooms and a living room, with many walls that are moveable to reconfigure the layout of the building. There is even an attic.

Designed to simulate an ordinary home, the building is made of shipping containers.

Haun said members of the department did most of the construction. Assistant fire chief Mark Ekstrom was given the task of making sure the facility fit with the neighborhood.

Another building to be constructed on site will simulate a restaurant and McDonald’s in Rensselaer donated materials from its recent remodeling project at its College Avenue location.

“We can use it for kitchen fires and fires in general,” Haun said.

A canopy was also built over a series of metal door props used to practice forced entry. As part of the dedication, the Indiana State Fire Marshal’s Indiana Fire and Public Safety Academy donated a prop fitted with a wooden-framed door one might find at a residence.

The prop can be used over and over by the fire department as well as city and county police officers as part of their training.

Each of the six doors on site has a particular challenge for those participating in emergency department training sessions, said Mike Parks, program director for the Indiana Fire and Public Training Academy District 1, 2 and 3.

The buildings on site were constructed through funding by Jasper and Newton County offices as well as the public. Materials were also donated as the facility took shape, Haun said.

“It’s a great opportunity to have a facility here to serve Newton and Jasper counties,” Parks said, “and we’ve already seen the facility being used. That’s what it’s all about. We appreciate everyone’s effort.”

Haun said it is his department’s hope to add more training equipment to the facility in the future.

“We’ve found some things we want to tweak, but we look forward to using it for many years to come,” he said.

Besides fire personnel, the police department has used the facility for training as well as personnel from other departments in neighboring counties.

“It’s not just for the fire departments. It can be used by police, EMS, hazmat …,” Parks said. “We’ve even held car seat classes at other training facilities.”

City council member George Cover was on hand for the dedication as well as other city officials. He praised the fire department’s vision in creating the facility.

“I want to express how proud the mayor, council and the city are of our fire department,” he said. “And we’re even more proud of the volunteer firemen we have that make it a success. We’ve got probably the best fire department in the state of Indiana, if you’re going to ask me. I do want to thank the mayor, Kenny and Mr. (Dain) Hayworth (Marian Township Trustee) for all that they do. We’d like to thank the state, too, for all they do to help us.”