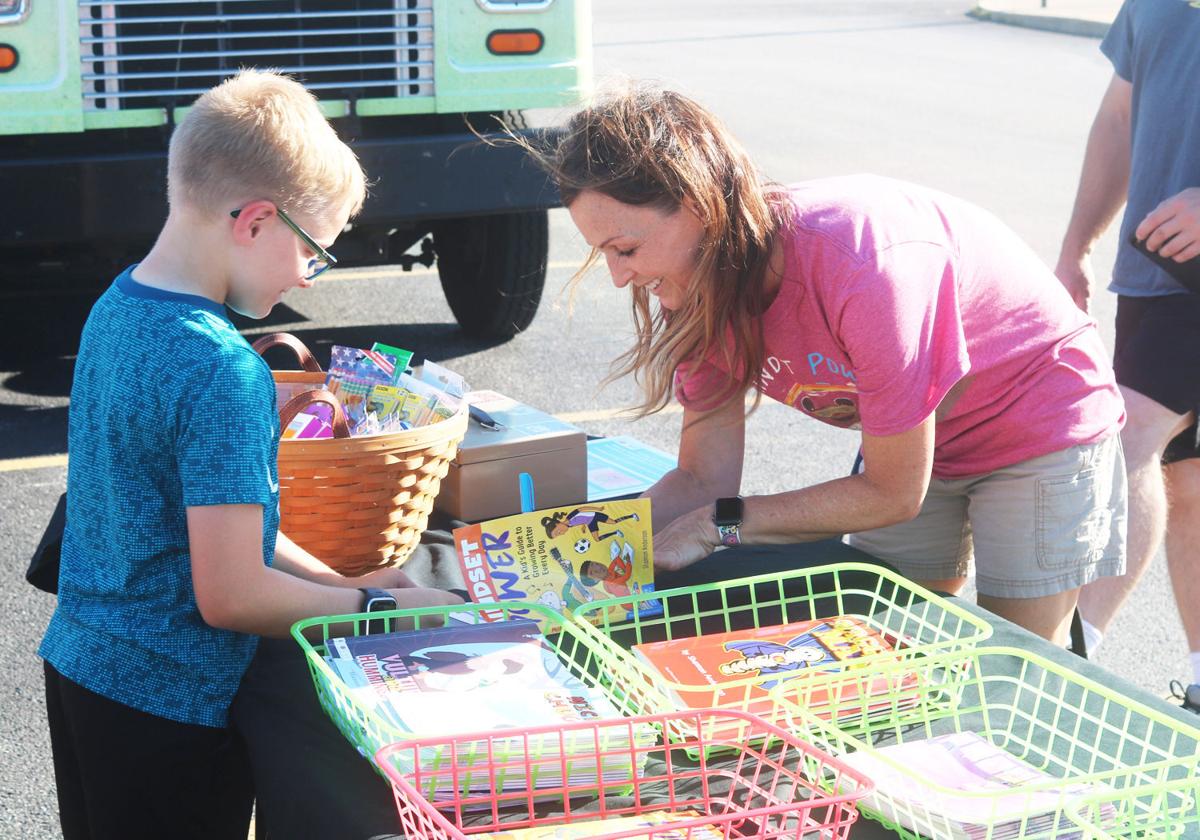 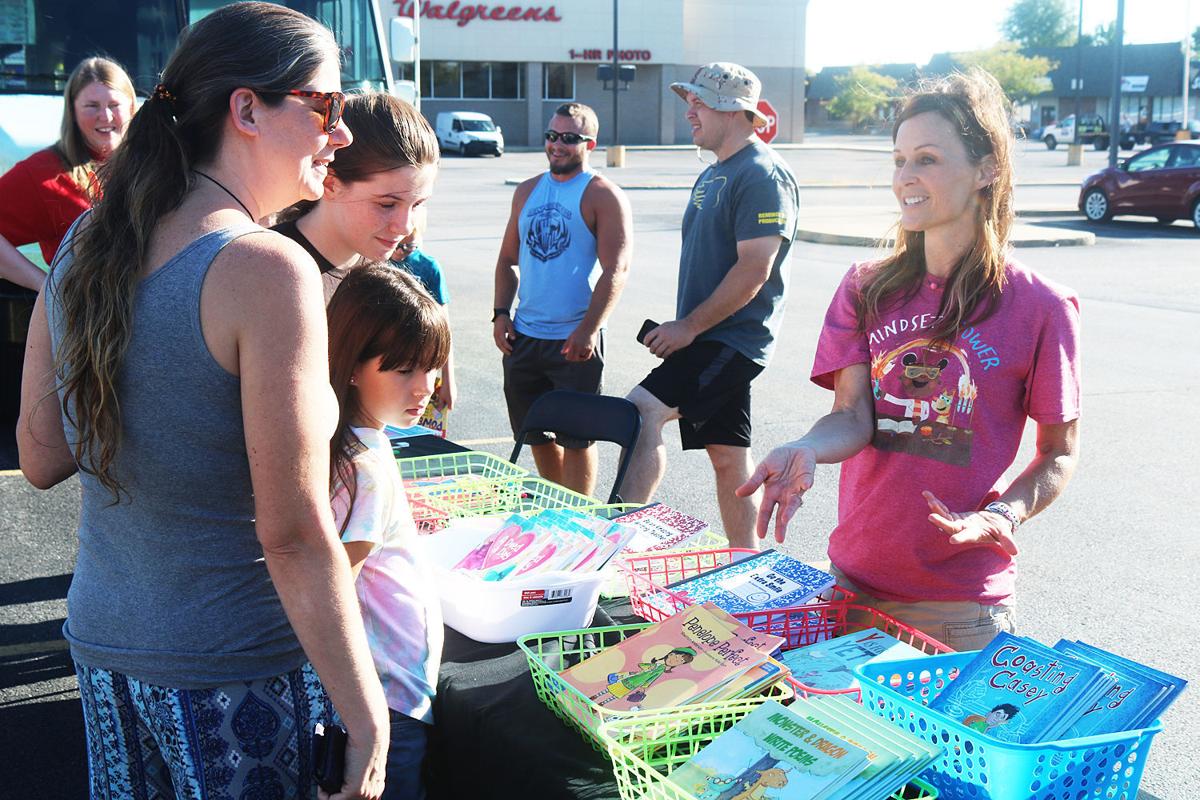 Shannon Anderson’s number of books as reached around a dozen. She brought all of her titles to a recent book launch in Rensselaer. 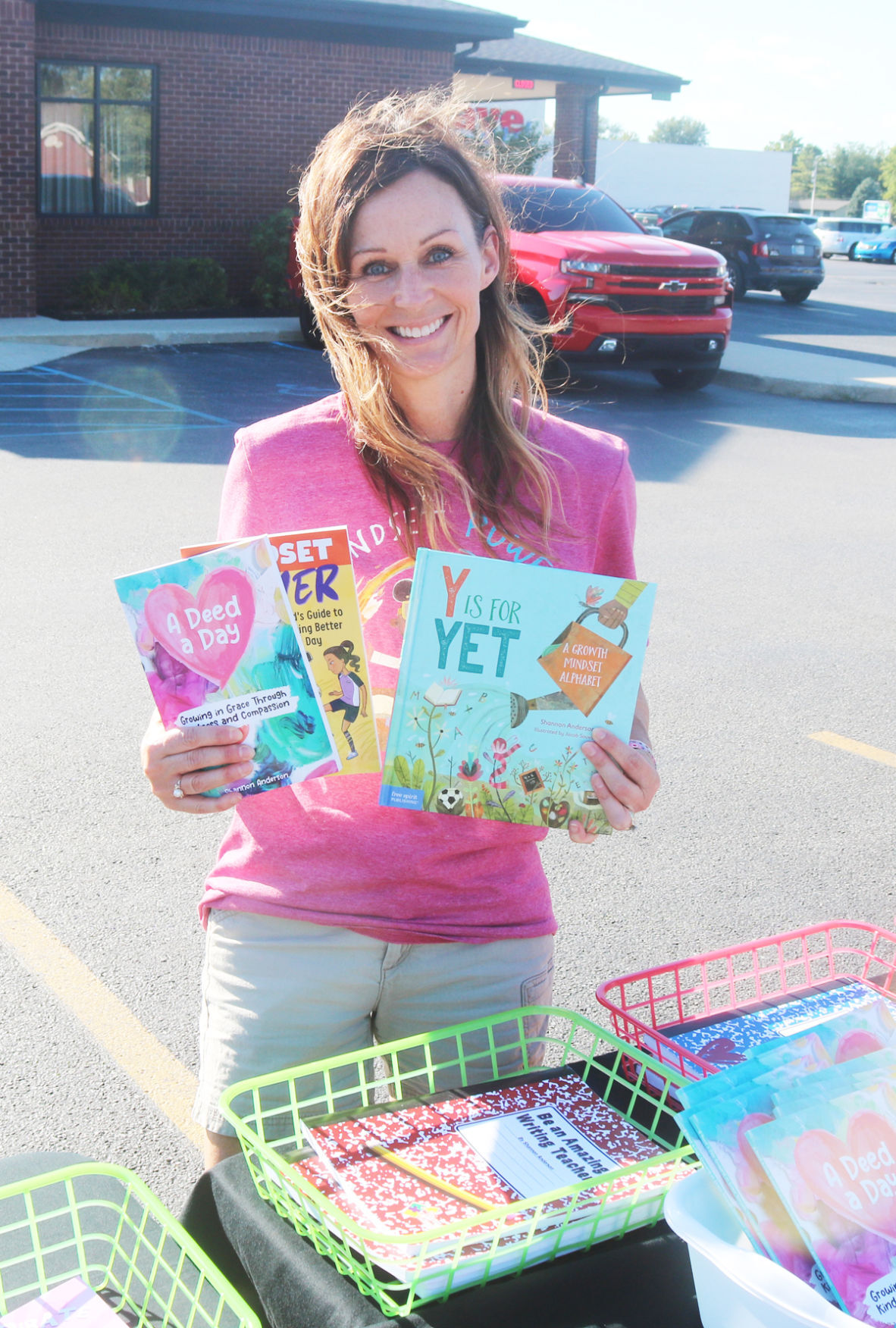 Shannon Anderson’s number of books as reached around a dozen. She brought all of her titles to a recent book launch in Rensselaer.

Anderson — who has taken a sabbatical as a third-grade teacher at Van Rensselaer Elementary to concentrate on producing new book titles, making author visits and teaching students online — held a book launch party at the Kentland Bank parking lot recently to announce the release of three new books: Y Is For Yet, Mindset Power and A Deed A Day.

The Y Is For Yet and Mindset Power are geared towards young and elementary-age readers. The A Deed A Day book is the first adult reader book for Anderson, who has now produced as many as a dozen titles in all, many of them illustrated children’s books.

Many of her books are available on Amazon.

“Most of my books deal with social/emotional-type issues,” said Anderson, who graduated from Rensselaer Central. “The mindset books involve thinking positively and not giving up and learning from mistakes.”

The Deed A Day book asks readers to think of others by performing a good deed each day. It features a story on good deeds and includes a Deed Diary to help families keep track of their own good deeds if they wish.

Anderson said her family kept a Deed Diary for a year. She wrote a story on the experience and it was picked up by Chicken Soup for the Soul series.

In fact, Chicken Soup for the Soul publishers used Anderson’s story in three of their books.

“It’s so that you don’t get stuck in the mode of what can I get out of the day rather than what you can bring to the day,” Anderson said.

It is a faith-based book, she added.

“I did a story about how it grew our faith and the ripple effect it had,” she said. “It was the catalyst to start the Fellowship of Christian Students at Van. That was a result of A Deed A Day.”

Anderson was first published in 2013 with I Am Not A Pirate, which illustrates daughter Maddie’s experiences of wearing an eye-patch. Maddie suffered from amblyopia or lazy eye and was fitted with an eye-patch to help strengthen that eye.

“Before Maddie had the patch, I didn’t know if there were other kids wearing an eye patch. I thought it was just a rare thing,” Anderson said. “And Maddie happened to get through it with a sense of humor. There wasn’t really anything available for Maddie to be able to show her a book where, ‘Look, this little girl also had to wear a patch.’ I saw a need there and I already started to find groups of parents who had kids with other experiences. I thought, you know, we should have a book for kids with this issue. I wrote it to show Maddie’s story and help kids see that you can get through it with a sense of humor, that there is a light at the end of the tunnel. You don’t do it forever. It was wonderful to Maddie because it makes her feel special.”

Maddie became a minor celebrity, with readers of the Pirate book asking for her autograph during a launch party at a local Barnes & Noble store in 2013.

By wearing the patch, Maddie was also able maintain her vision in that eye.

“If we hadn’t caught it early, she could have gone blind in that eye,” Anderson said. “I felt very passionate about writing the book and putting the information in the back so that other parents could see that it is crucial to catch it when they’re younger, that it’s really important to get checked.”

A grant from Eli Lilly helped kick-start Anderson’s career at an author. The company offered $1,000 scholarships and Anderson applied for one in 2010.

“It’s a way to refresh teachers to invest in a passion of yours,” she said. “It doesn’t have to relate to school.”

“I started to take classes and I was just hooked,” she said.

“My high school job was working at the Rensselaer Library and I just fell in love with children’s books all over again,” she said. “I thought it would be really cool someday to write them. I knew I wanted to be an elementary teacher, but I thought how cool would that be to be able to write books you can share with the kids in your class.”

It took some time to find a publisher willing to release I Am Not A Pirate, but once Anderson got her foot in the door, she was able to stick with that publisher and entice others to release her books.

“Once you work with a publisher and they like your work and you’re saying good things,” Anderson said, “it’s easier to get another book with them.”

Publishers take Anderson’s story idea to illustrators, who provide examples of how they interpret the story.

“The work really is 50-50,” she said. “It’s half the author and half the illustrator, with the publisher the middle man.”

Publishers keep authors and illustrators separate, but authors do get a chance to see sketches of their stories produced by the artists. Anderson said she’s been pleased with the artistry of every illustrator she’s worked with.

“Once you do have an illustrator, you do get the sketches sent to you and you can make suggestions,” she said. “If you see a mistake or see something that was misconstrued that didn’t get across then you can make a note of that and they (publisher) will talk with the illustrator.”

Anderson is scheduled to release two more books later this year: Too Shy To Say Hi and I Love Strawberries.