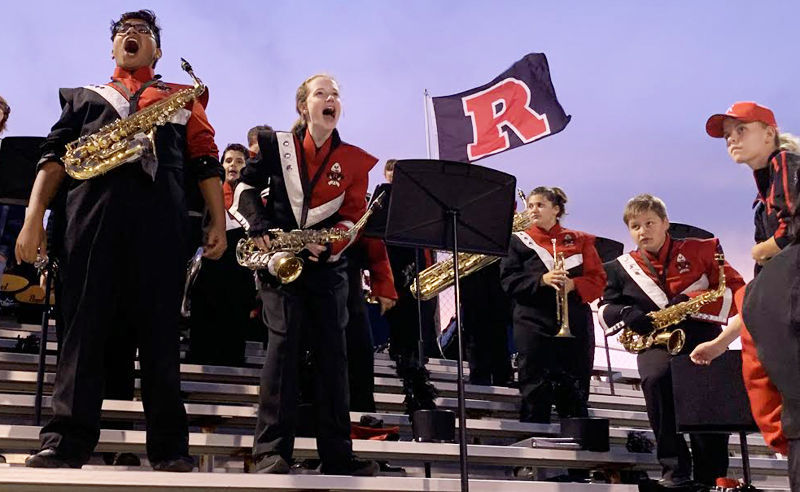 High school students served as mentors for the eighth-grade band class as part of Music in Our Schools Month last fall. 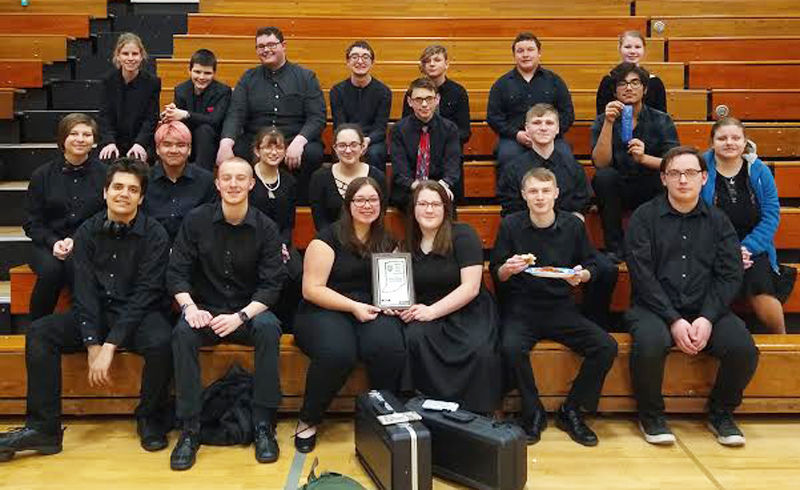 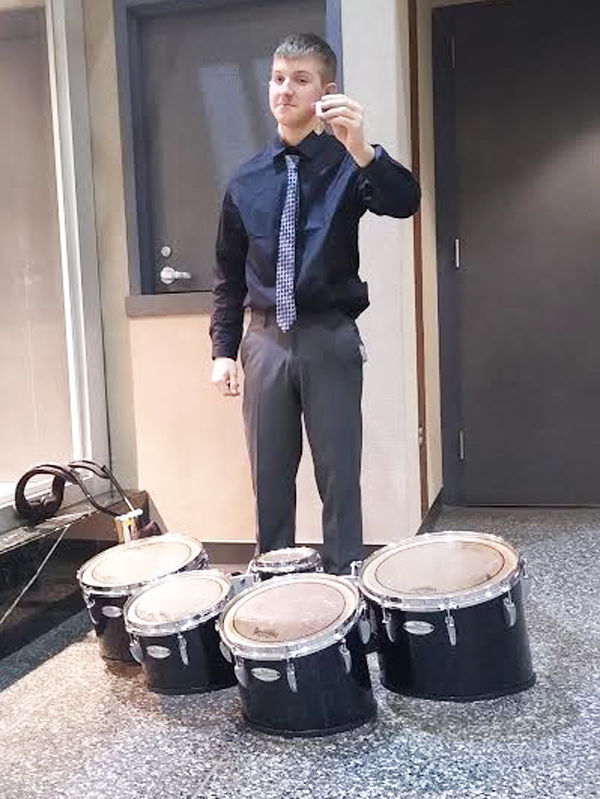 Kynon Sell received a gold rating at State Solo and Ensemble for his tenor drum solo.

High school students served as mentors for the eighth-grade band class as part of Music in Our Schools Month last fall.

Kynon Sell received a gold rating at State Solo and Ensemble for his tenor drum solo.

RENSSELAER — Director of Rensselaer Bands, Amber Hall, who was in her first year at Rensselaer, says the band program was a success this year, despite the early end to in-person instruction and school competitions.

Here are some of the highlights of this year’s band program.

Drum major Emily Budd is proud of the Brigade’s work this year, saying, “We may not have made it to state, but the growth I’ve seen in this group is a much better achievement.”

Budd loves the bond that comes from the hours of work spent putting a show together. She says it’s something other team activities “cannot match.”

“In my opinion, that bond is more important than any trophies or gold medals ever will be.”

Budd also notes that this year’s marching band season was made special by the new band director. Budd calls working with Hall “the biggest highlight of the season,” praising Hall’s patience, her willingness to honor Rensselaer traditions as well as to introduce new ideas, and her ability to inspire a passion for music in her students.

“She has done a fantastic job teaching us, motivating everyone to work hard and do our best while having an amazing time,” Budd said.

Under Hall’s direction, the Brigade marched in the parades at Earl Park and at Little Cousin Jasper, winning the Best Band Award in the latter parade. They also performed a half-time show at four varsity football games, including a special performance of the national anthem with Jim Cornelison, famed for singing at sporting events for the Chicago Blackhawks, Chicago Bears, and Indianapolis 500.

Many of those students who march in the Brigade shift to playing music for the pep band during winter sports season. This year the pep band played 16 performances for boys’ and girls’ varsity basketball, including the band’s first alumni night, with 15 alumni joining the pep band to play during the game.

When asked why she wanted the pep band to host an alumni night, Hall said, “I wanted to give alumni the opportunity to play again. It helped me as a new director get to know more people within our community. I also think it’s important to show my current members that being a musician is a lifelong skill. [Band members] might become lawyers, doctors, teachers, etc., but they’ll always have the ability to play an instrument.”

Middle school principal Greg Michael was one of the musicians who played alumni night.

“I was amazed that I was able to remember the notes and fingerings of the baritone,” he says.

Michael especially enjoyed having the opportunity to play music with his son, Jimi, who also plays baritone.

“It’s difficult for me to express the gratitude I have for being provided this opportunity,” he said. “This is a memory I will cherish for years to come.”

Making Music for the Community

It’s not just at sporting events that the Rensselaer bands perform for the community and with the community. The band program’s concert series offers music throughout the year and is free to the public.

In December, the high school and the middle school bands performed Christmas concerts in conjunction with the choral department. In addition to the concert series, the Jazz Band performed at the Rensselaer Care Center this year, and Rensselaer band students Jasmine Self, Lincoln Manis, and Kiersten Manis played in the Jasper-Newton Community Band.

“I truly have one of the best jobs because of the community support and involvement,” she said. “I’ve heard the slogan ‘love where you live’ around town. It is my hope that the band can continue to enrich our community and be a small reason why our community members love where they live.”

Making Music with Others around the State

Rensselaer band students also have the opportunity to travel to work with other musicians around the state through regional honor bands.

Hall says that honor bands are “one of the best experiences for students to perform with other students around the state and learn from world-renowned composers and conductors.”

“I strongly encourage any and all band kids to attend any honor band events that they can. It’s a wonderful way to meet new friends and learn from a completely different perspective.”

The Drum Corps International (DCI) INpact Band provides another opportunity for band students to collaborate with other musicians. This is an event held in conjunction with the DCI World Championships, which are held every year at Lucas Oil Stadium in Indianapolis.

The INpact band gives middle school students a behind-the-scenes look at DCI and the opportunity to perform on the Lucas Oil Stadium field. This year, Abby Budd, Jacob Ekstrom, Anderson Heinig, Debbie Hendrix, Ryan Louck, Mandolyn Loveland, Kiersten Manis, Lincoln Manis, and Jordyn Myers joined over 300 other middle schoolers from around the state to march on that field.

And the spirit of collaboration didn’t end when students returned to Rensselaer. Band students celebrated March’s Music in Our Schools Month by working across buildings, with 13 high school students mentoring middle school students in their work.

Students have a number of opportunities to practice, perform, and compete through the winter and spring, including Winter Percussion, an ensemble that performs a five-minute show. Percussion Section Leader Jimi Michael says it was a shame that the season had to end early — the last two competitions of the season were canceled — but, he added, “it was still so much fun getting to play this piece alongside the rest of the ensemble.”

Michael wrote the music for the show with junior Kaleb Hernandez.

“It took several late nights at my house with my laptop alongside a piano,” Michael says, “just brainstorming different ideas.”

The show was inspired by the five stages of grief and earned the group silver medals at each of their competitions.

Spring offers students the opportunity to compete in solo and ensemble performances. This year 36 students competed, with 11 winning gold, 11 winning silver, and three winning bronze. Percussionist Kynon Sell even advanced to the state solo and ensemble event, where he received a gold. And the Jazz Band earned a silver rating at another spring event: the Indiana State School Music Association (ISSMA) competition.

How did school closures affect band?

The closing of school buildings and the movement to distance learning meant that a number of events did not get to happen as planned. These included the middle school and high schools competing in the ISSMA Concert Band Contests in March and April.

Another important impact of the pandemic on Rensselaer bands has been the disruption of the usual recruitment routines. Because she can’t meet fifth-graders and others to help them learn more about band, the band director is having to get creative.

“So far,” Hall said, “I have put a resource tab on the band’s website which includes a brief handbook, instrument tutorial videos, and a short Google form to collect information from those interested. I will also be working to schedule an instrument try-out night late summer or at the start of the school year.”

How does next year look?

Hall is also delighted about a donation from the Rensselaer Rotary Club, which enabled the purchase of a new drum set, several pairs of mallets and triangle beaters. And the high school will be offering Music History and Appreciation as a new elective next year.

Jimi Michael, who graduates this year after playing in band every year since sixth grade, encourages students who think they might be interested in band to check it out. He says that he has loved “the many hours of practicing I’ve spent with my friends in band . . . . I’ll remember these great moments for the rest of my life.”

For more information about the Rensselaer band program, visit http://rensselaerbands.weebly.com/ or search for Rensselaer Central Bands on Facebook.