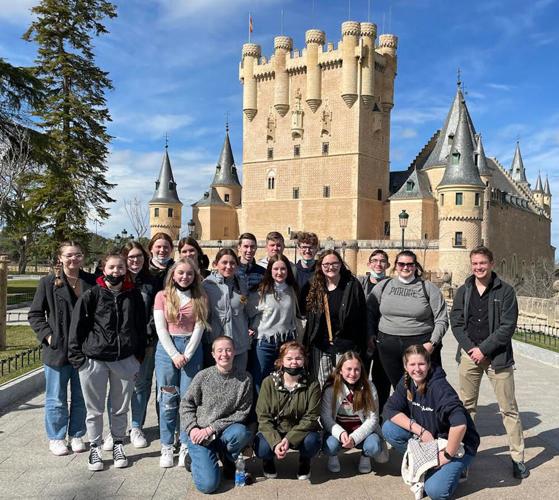 Rensselaer Central students pose in front of the Alcázar in Segovia, Spain. The stop in Segovia was a highlight of the trip. 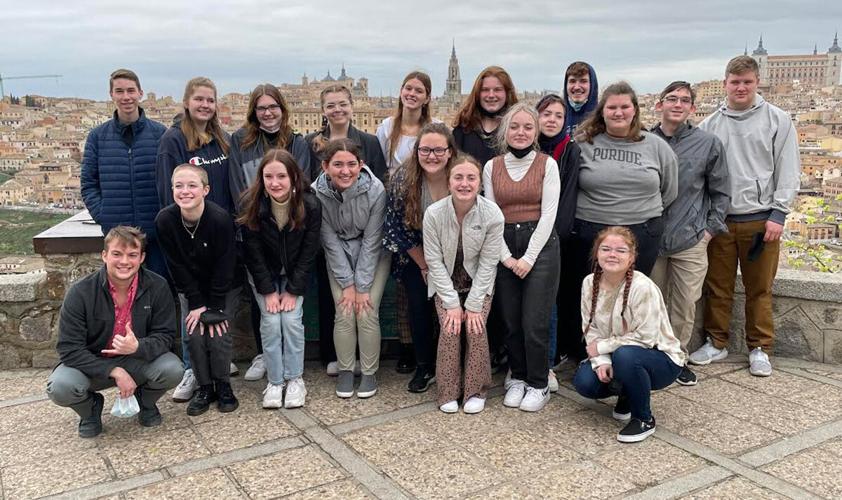 Students take in the sights at Toledo, Spain.

Rensselaer Central students pose in front of the Alcázar in Segovia, Spain. The stop in Segovia was a highlight of the trip.

Students take in the sights at Toledo, Spain.

RENSSELAER — You can pencil in Rensselaer Central student Grace Healey for a second trip to Spain next spring.

Healey was one of 33 students, parents, teachers and chaperones to visit Spain with a stop in France for what is traditionally an annual trip overseas for Jan Benner’s Spanish class. “Me and my sister want to go again definitely,” Healey said. “She wants to see to see the Sagrada Familia in Barcelona. I said I’ll take you to Paris because you’ve never been there.”

It’s the 14th such trip for Benner, who has reserved a trip to Spain and other spots in Europe through the travel organization WorldStrides for as many as 40 or more people in past years. Benner said local businesses have helped support the yearly trips.

This year’s excursion took place March 17-26, with the group arriving in Paris on day two.

“A 10-day trip isn’t really long enough,” Benner said, “but they get to see the highlights. It’s a great introduction to Europe.

“For me, I see different things each time I go. There’s always something new.”

The group visited Paris landmarks, including the Arc de Triomphe, the Eiffel Tower, the Louvre and the Notre Dame Cathedral.

They were led by a guide through Paris and Versailles before traveling to Madrid on day six through nine.

Benner last took a group in 2019 with the COVID pandemic forcing WorldStrides to postpone any planned 2020 excursions. In order to go this year, school nurse Sara Redlin had to test every participant before they left.

Once in Europe, the group had to wear masks most everywhere and they were tested again when they returned to the states. Benner said the Jasper County Health Department provided masks for the trip.

“Everybody was fabulous about following the rules,” said Spanish teacher Tracy Kalbaugh, who went as a chaperone. “We had no issues and it made it a very pleasant trip.”

The group was able to spend a day or two at many stops on the itinerary, following tour guides in museums and places of interest throughout the day with some time in the evening to explore on their own.

“They had some time for shopping or get a bite to eat,” Benner said. “When it was time to go out we wanted them to use their language to communicate.”

“It was an adventure seeing what they learned in class and seeing those connections,” Kalbaugh added.

Healey said a main highlight of the trip for her was the trip to France.

“I definitely enjoyed going up the Eiffel Tower at night. It’s beautiful,” she said. Healey also enjoyed immersing herself in France’s culture despite the short time she had there.

“I definitely struggled more in France with their culture because I didn’t know anything about their culture or their language,” she said. “That was definitely a communication barrier. Seeing the two different cultures and how different they were was very cool.”

The group also dealt with springtime weather much like in the U.S. The air was chilly and there was a drizzle or two of rain, but “We were lucky several days with the weather,” Benner said.

Many students and parents felt a major highlight of the trip was the stop in Segovia, Spain. A very old city, Segovia is “like stepping back in time,” Benner said.

The city features medieval walls, Romanesque churches, a former royal palace and a Gothic cathedral. Its ancient Roman aqueduct has more than 160 arches.

“The tour guides educate our kids, too,” Benner said. “They’re very interactive and it’s very engaging for the kids.”