The Town Mall on Van Rensselaer Street housed over 20 small businesses before it burned to the ground in 2019. It is now an empty lot. 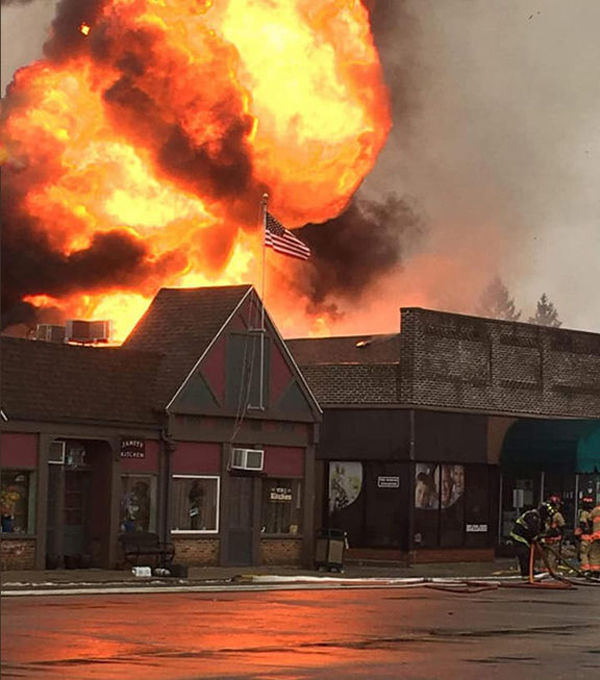 Faulty wiring contributed to the Town Mall fire that took over 12 hours for fire departments to extinguish in 2019.

The Town Mall on Van Rensselaer Street housed over 20 small businesses before it burned to the ground in 2019. It is now an empty lot.

Faulty wiring contributed to the Town Mall fire that took over 12 hours for fire departments to extinguish in 2019.

That’s how Steve Filson and his family would like to utilize their property on Van Rensselaer Street.

Now a vacant lot along the length of a city street, the property was once home to a town mall that burned to the ground in November 2019.

More than 20 businesses were uprooted by the fire, including an insurance business, a hair salon, the Jasper County Economic Development Organization office and Kim Moyer’s optometrist office.

The mall once housed Long’s Gifts and From the Needle’s Point as well as the old TV Cable office and internet business.

An excavating company dug out the foundation of the building weeks after the fire and black soil was laid over the entire lot. It now sprouts green grass in the spring and summer and gives an unobstructed view of murals along Rensselaer’s Art Walk as well as views of Potawatomi Park to the west.

Its proximity to Potawatomi and the Art Walk was likely one reason the Filson family would like to see the property become a park.

The Filsons offered the lot as a gift to the Rensselaer City Council at its meeting on Dec. 28, but only if the property was used as a park or in connection with the operation of a park for the next 15 years. It will be known as Filson Park.

The council approved accepting the lot with a 4-1 vote, with Noelle Weishaar the only dissenting vote. She felt a park on downtown property was not a good use for the land.

Mayor Steve Wood said he would also like to see the land developed, but understands it would likely require major investment.

“It would be a nice place for a business off the main drag, around the corner,” he said. “But it would be a big undertaking if somebody would want to develop that part of the city.”

The city’s acceptance of the property does carry a couple of stipulations. Currently zoned as a Business-3, which does allow the development of a park, any improvements to the property once it becomes designated as a park must be approved by the city’s zoning board.

“So if they would want to put a fountain on that property or something else,” Wood said, “they would have to go to the plan commission.”

Wood said Rensselaer Main Street and the city’s park board are willing to work with the Filsons when a plan is developed.

“The council didn’t want to take the property at first,” Wood said. “There were a lot of restrictions at the start, but lawyers on both sides got together. We came up with a good compromise.”

Stephen Eastridge, executive director of the Jasper County Economic Development Organization (JCEDO), said he would have liked to have had the chance to find developers for that property, if the city showed interest.

But, he said, “the city didn’t include or consult with JCEDO on that conversation.”