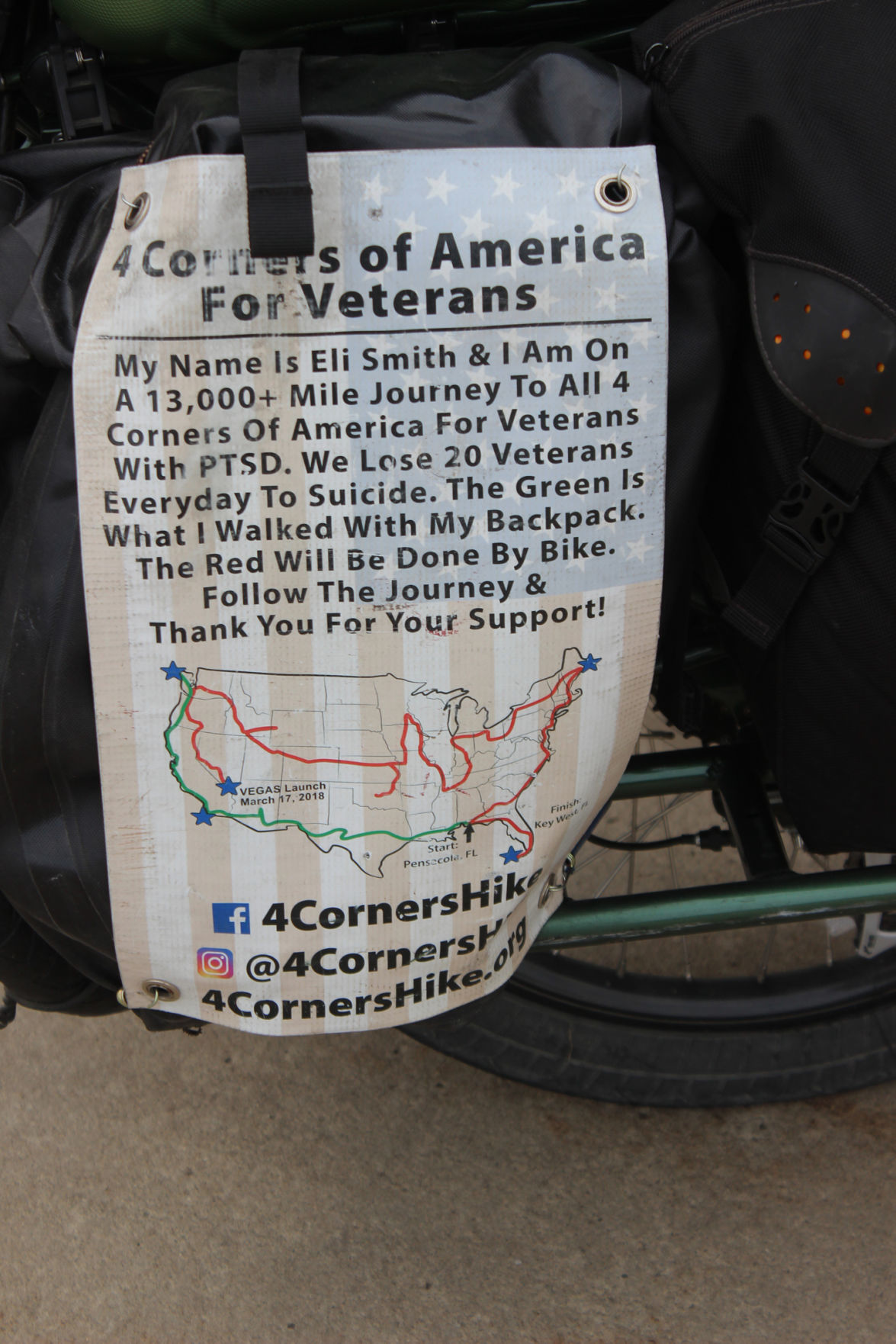 Eli Smith, an Army veteran himself, has this sign attached to his bicycle on both sides so people can see what his ride is all about. (SHELHART/Post-News) 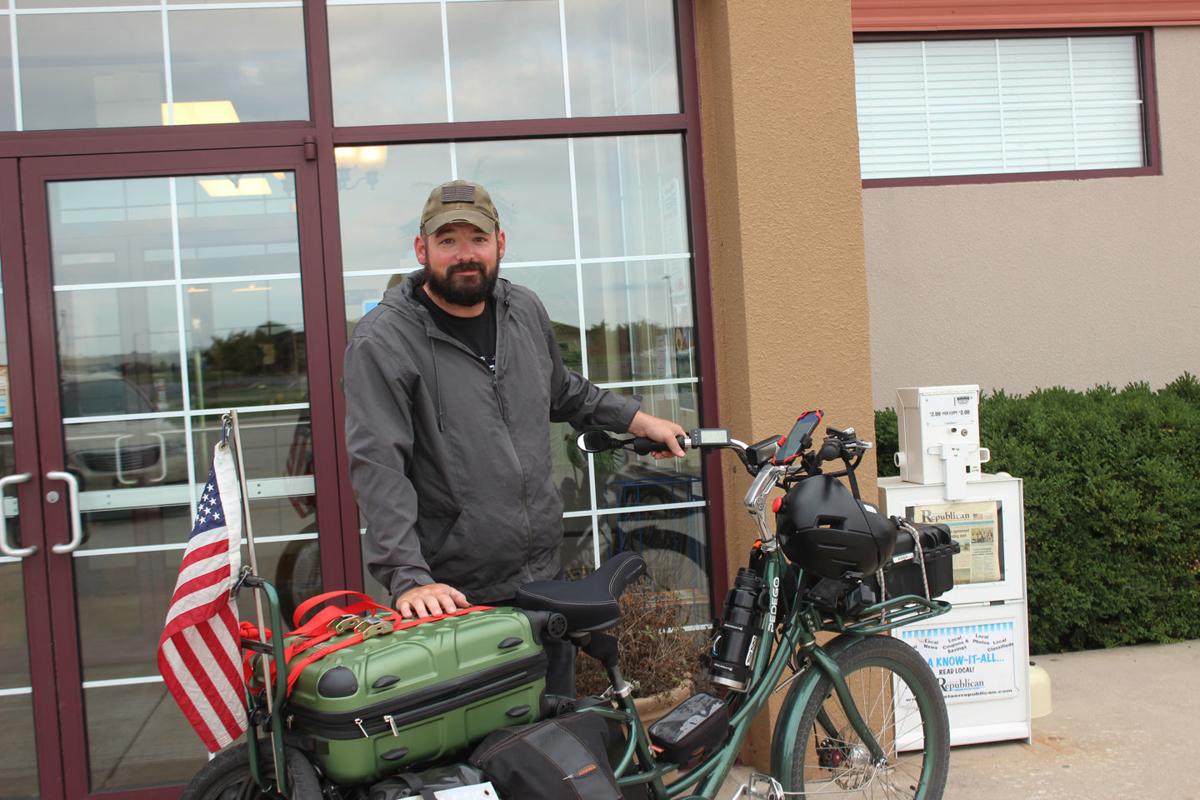 Eli Smith is ready to head out to the interstate for a night at a local hotel before heading north to Merrillville Wednesday morning. He spend the night in Rensselaer after having a free meal at the Royal Oak Restaurant, provided by the restaurant. He relies on people’s generosity to get him through his long journey. 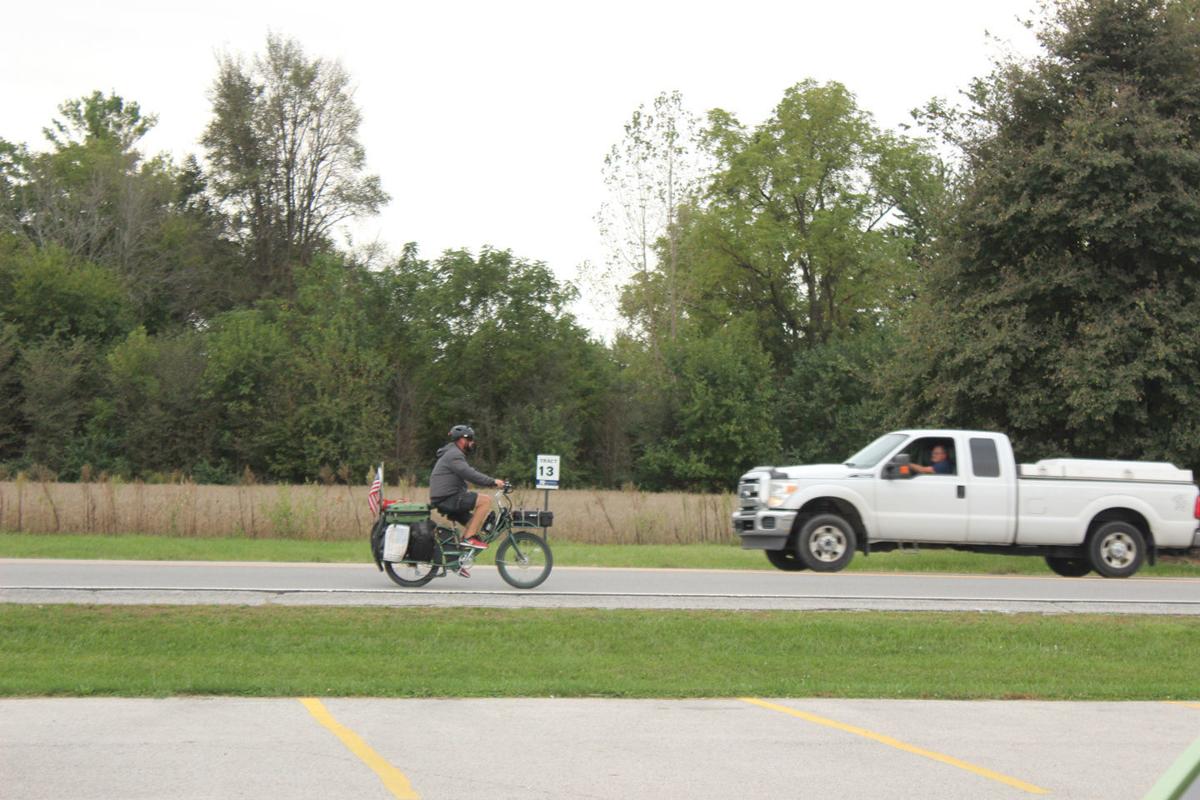 Eli Smith pedals off, heading for SR 114 and an overnight stay at a hotel by I-65 before continuing his long, lonely purposeful journey for veterans who suffer from PTSD and veteran suicide awareness.

Eli Smith speaks to Alex Babick of Oxford, Ind., who had also stopped by the Royal Oak Restaurant in Rensselaer. Smith and his electric bicycle are traveling across the country to bring awareness to veterans suffering from PTSD and to veteran suicide. He is heading north to Chicago before heading east. (SHELHART/Post-News)

Eli Smith, an Army veteran himself, has this sign attached to his bicycle on both sides so people can see what his ride is all about. (SHELHART/Post-News)

Eli Smith is ready to head out to the interstate for a night at a local hotel before heading north to Merrillville Wednesday morning. He spend the night in Rensselaer after having a free meal at the Royal Oak Restaurant, provided by the restaurant. He relies on people’s generosity to get him through his long journey.

Eli Smith pedals off, heading for SR 114 and an overnight stay at a hotel by I-65 before continuing his long, lonely purposeful journey for veterans who suffer from PTSD and veteran suicide awareness.

Eli Smith is on his northward leg of a 15,000 mile journey to the four corners of the United States on a mission to bring awareness of veterans who suffer from PTSD and depression. With a high suicide rate among veterans with post-traumatic stress disorder, Smith decided he wanted to do something to bring awareness and stop those who suffer from considering and following through with suicide.

He decided he would walk from one corner of the country to the other, hitting the northwest, southwest, northeast and southeast states and all states in between. His journey began in November 2016, after selling everything he owned to fund his mission, the walk began in Pensacola, Fla. He followed a southern route and up the western coast of California to Seattle, Wash. His funds ran out and since, he has relied on donations to get him through.

Meanwhile, he stops and talks to veteran services, VFWs, American Legions, etc. On Oct. 1, he stopped in Lafayette and visited the Indiana State Veterans Home. He dropped off a “sizable” donation to the commissary so the veterans wouldn’t have to buy snacks out of pocket for awhile.

An Army veteran, Smith left the service in 2002. After leaving the Army, he lost a couple of friends to suicide, men who had suffered from PTSD after their service to our country. He wanted to find a way to bring attention to the problem these veterans are facing and to try and stop as many suicides as he could. He said approximately 20 veterans a day commit suicide and that is 20 too many.

Smith is proud of the fact that letters have been sent from veterans who had contemplated suicide, then heard about his journey. They sought out help instead and wanted to thank him for saving their lives. He is humble but happy to make a difference in their lives.

“The letters keep me going,” he said as he stopped for the day in Rensselaer. He was treated to a hearty lunch at the Royal Oak Restaurant Tuesday afternoon. The owner, Andy Ademi, donated a meal for Smith and a nice slice of key lime pie to top it off.

This year, Smith stopped hiking due to the toll the long distance walking was doing to his knees and back. He was carrying 60pounds on his back every day. He now pedals a bicycle with a pedal assist motor, but he still has to pedal hard every day. Since leaving on his journey, he has been hit by vehicles as he walks/rides on the side of the road, has suffered heat stroke, was literally lost in the woods of Oregon where it took rescuers six hours to find him by GPS, and has had an attempted kidnapping and an armed robbery, the latter being in a small town in Iowa.

“A lot of veterans are dealing with PTSD so being robbed is nothing compared to what they go through every day,” Smith said.

This journey began in March of this year in Las Vegas. He went north to Oregon then came southeast through Idaho, Utah, Colorado, Kansas, Oklahoma before heading back north to Minnesota, passing through Missouri and Iowa. He traveled south again skirting Illinois to travel through Tennessee, Kentucky and Indiana. As he stopped over in Rensselaer, his plan was to travel to Merrillville, where he had scheduled another interview and an overnight stay before arriving in Chicago on Thursday, Oct. 4.

He had television interviews scheduled in Chicago and planned to visit some veteran organizations in the city before heading east across Indiana and into Ohio. His family lives in Columbus and that is where he will spend the winter before he heads out for the next stretch, expecting to finish this time next year in Maine. He will end his long journey in Key West, sometime in 2020, where he plans to “sleep,” rest and relax.

During this long lonely trek, he has heard many stories, “heart wrenching stories” he said, from veterans and from families who have lost a loved one to suicide.

“People come together for a cause no matter their ideology,” Smith said. He is generally welcomed wherever he goes. His family is also very supportive, although in the beginning they thought the idea was a bit crazy, but now they see the good his journey is doing and how it brings people together.

He does get frustrated at times, but then he remembers why he is doing this and he soldiers on. He smiled, “I’m the hardest working unemployed man in America.”

Smith said he gets a little nervous when he gets down to just a few dollars in his pocket, but people always seem to come through for him. He can usually get a hotel room donated to him, nine times out of 10, and like Royal Oak, he is often treated to a meal.

Smith usually goes live on Facebook when his journey ends for the day, and he posts blogs of his journey on Facebook and Instagram. Since he took up the bicycle instead of walking, he added another 3,000 miles to his plan and will have covered over 15,000 miles of the U.S. when it’s all done.

Although he is uncertain of his future, he knows it will work out for him and he will have lots of stories of his own to tell when his journey ends.

To follow Smith, he can be found at Eli Smith 4CornersHike on Facebook or find the links to his social media pages on his website, 4cornershike.org. Donations to keep him on his journey and to help veterans with PTSD, can be made on his website, which has a link for online donations.