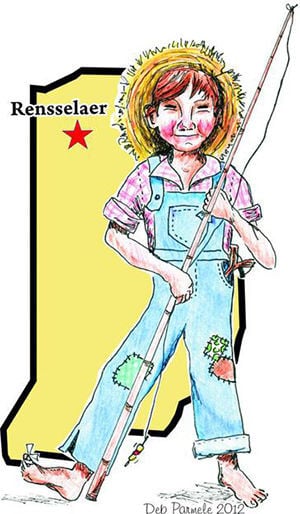 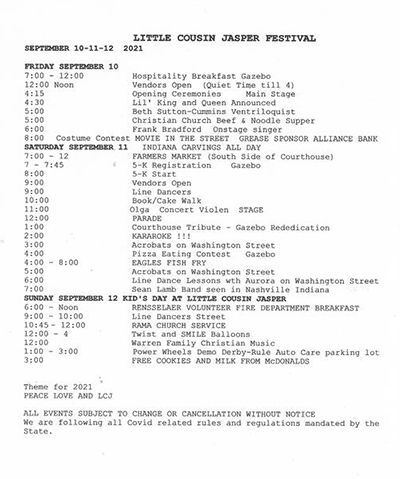 RENSSELAER — The Little Cousin Jasper Festival that dates back to 1972 is returning for some family fun next week.

The annual Little Cousin Jasper Festival is scheduled for Sept. 10-12, after being canceled last year due to COVID-19. The festival includes the Lil’ King and Queen contest, food and retail vendors, a parade and down-home entertainment.

“We held off as long as we could last year,” said Little Cousin Jasper President Pat Fox. “I think it was about a month off before we canceled. You just couldn’t put everybody in jeopardy. We were heartbroken.

“This year, we went ahead with the theme that we had last year and optimistically went full steam ahead.”

Fox, who has helped organize the event for more than 16 years, said the theme this year is “Peace, Love and LCJ,” and visitors are encouraged to wear tie-dye and hippie-styled fashion.

“Everyone has been inside and confined and deprived, so I think that everyone is looking forward to the festival,” Fox said. “We have had a few new vendors call and we have not had anybody who came before that is not coming. We have added a few new ones.”

One of the new activities being offered at the festival this year is showing “Grease” during the Movie on the Street on Friday night. As part of the fun, viewers are encouraged to wear apparel or costumes replicating the fashion of “Grease.”

Fox also mentioned that Indiana Carvings will be at the festival all day Saturday.

Although the Little Cousin Jasper 5K Race is not new, Fox is anticipating a solid turnout.

“Our 5K went downhill several years ago. We just had a problem getting anyone to do it,” Fox said. “Now we have it built back up to a really, really good event.”

She noted the community increased the support of the race as several prizes have been donated.

“The community has just been so good,” Fox said. “The people who donate every year are really awesome, including all the businesses.”

The entertainment includes a ventriloquist, singers, bands, line dancers, a violinist, acrobats and karaoke. Fox said there will also be a Power Wheels derby on Sunday.

This will be the second year for the derby.

Along with the traditional activities of the festival, the organizers will recognize 9/11.

“There will be a lot of patriotic-type things,” Fox said.

She also noted that this is the 125th year of the Jasper County Courthouse and the Rensselaer Volunteer Fire Department. Both are being recognized as the grand marshals of the parade.

Fox said there is a committee of about a dozen volunteers who organize the festival. She noted that about half of the volunteers are older than 70 years old.

“There is no way that we could do this without the city, the parks department and the electric department. If I need anything, I can call any one of the departments and they will send employees,” Fox said.

Fox is also grateful for the support the festival receives from Rensselaer Mayor Steve Wood and the county and county commissioners, who allow the festival to be held on the courthouse lawn.

“Stace Pickering does our parade every year and he does an awesome job on the parade,” Fox said. “My committee is just awesome. For a dozen people to do what we do is pretty phenomenal.”

Little Cousin Jasper is held on the Jasper County Courthouse Square. This is the 46th year of the festival. There were two years that the festival did not happen because there were not enough volunteers to make it happen. Last year, the festival was canceled for safety reasons.