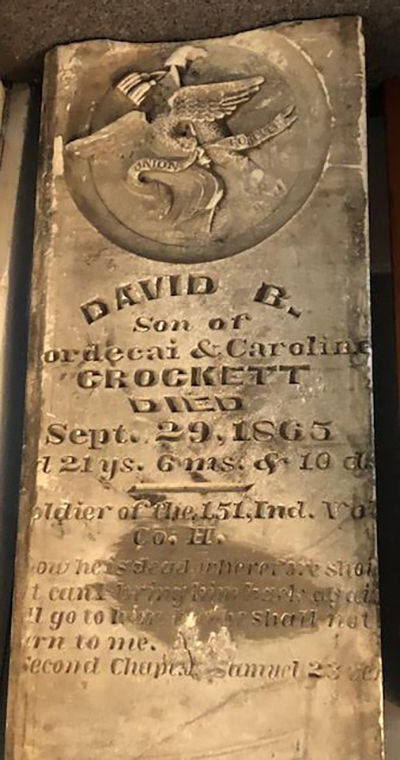 This headstone of Rensselaer’s own Davy Crockett was found in the attic of what is now the Jasper County Historical Museum.

The Free Will Baptist Church used to call the current Jasper County Historical Museum its home from 1884 to 1902. 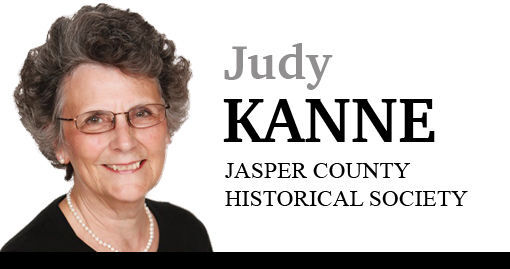 This headstone of Rensselaer’s own Davy Crockett was found in the attic of what is now the Jasper County Historical Museum.

The Free Will Baptist Church used to call the current Jasper County Historical Museum its home from 1884 to 1902.

What’s in your attic? This was what was in our attic.

In 2001, Jasper County Historian Beulah Arnott noted that while rewiring the Jasper County Historical Society Museum, Steve Waling and Rick Shide discovered something curious in its attic. It was a headstone, and not just an ordinary headstone, but one attributed to a Davy Crockett. Hum, no it was not the famous one we read about it history, but a David B. Crockett, who was also quite noteworthy.

This Crockett was conscripted as a Union soldier in the 151 st Indiana Volunteer Infantry Regiment in the Civil War. He died on September 29 of 1865, five months after the war ended.

He was only 21 years old. His brother Thomas was also a Union soldier; he lived until 1920. For some reason, this headstone was discarded. It may be because there was a large obelisk in Crockett Cemetery where he is buried with his parents, Mordecai and Caroline Lamson Crockett. The obelisk has those three names on it. David is listed in the Crockett Cemetery records. His father, Mordicai, died in 1854 when this David was only 10 years old. Possibly, the family of the wife and five sister and brothers determined to honor their father and David with the tall monument, and this headstone was replaced by the tall monument.

The headstone found at the Museum displayed a carving and words. “A beautifully wrought carving on the top depicts a war eagle with a banner that reads “Union Forever” plus a Bible verse, according to a 2001 newspaper column by Keven Cullen, in the Lafayette’s Journal & Courier.

The surprise was found on the other side of Crockett’s headstone, the carving said “F W Baptist Church, 1884.” The FW stood for Free Will. That is what is the old church, now the historical museum, was first named when it was built on the corner south of its present spot. The Free Will Baptists were organized in 1853, according to Arnott’s column, and in 1881 they purchased the land on the corner of Van Rensselaer and Susan Streets, now known as Hal Grey Park, from John C. Van Rensselaer. The headstone had been placed upon the front gable of the church when it was erected.

DeMotte Chamber to bring back Touch of Dutch in 2022

In 1916, this property was sold to David H. Yeoman, who in turn sold it to Lewis Fritz.

The Christian Science Society bought this structure. In 1922, these new owners made repairs and improvements, and the front right side entrance was changed to the center of the structure as it is now.

In 1986, with the members of the Christian Science Society dwindling, the two final members, Cordelia Stockton and Ora Kepner, donated the building to the Jasper County Historical Society.

Two fun facts ended Arnott’s column about the headstone were that: “Yes, Rensselaer had its own Davy Crockett, and we also had our own Ulysses S. Grant. Davy is buried in the Crockett Cemetery and Grant’s tomb is in Weston Cemetery.”

Please visit the Jasper County Historical Society Museum to see the present exhibit, Jasper County Advertising, showing many advertisements and give-away items from business in the past history of the county. For appointments, email jchsmuseum@gmail.com. The museum is open, except on holidays, from 10 AM to 1 PM on the first and third Saturdays each month.

The next meeting is Tuesday, Feb. 15, 2022 at 6:30 p.m. with Adam Alson discussing Appleseed Childhood Education at the Museum, 479 N. Van Rensselaer Street, Rensselaer.