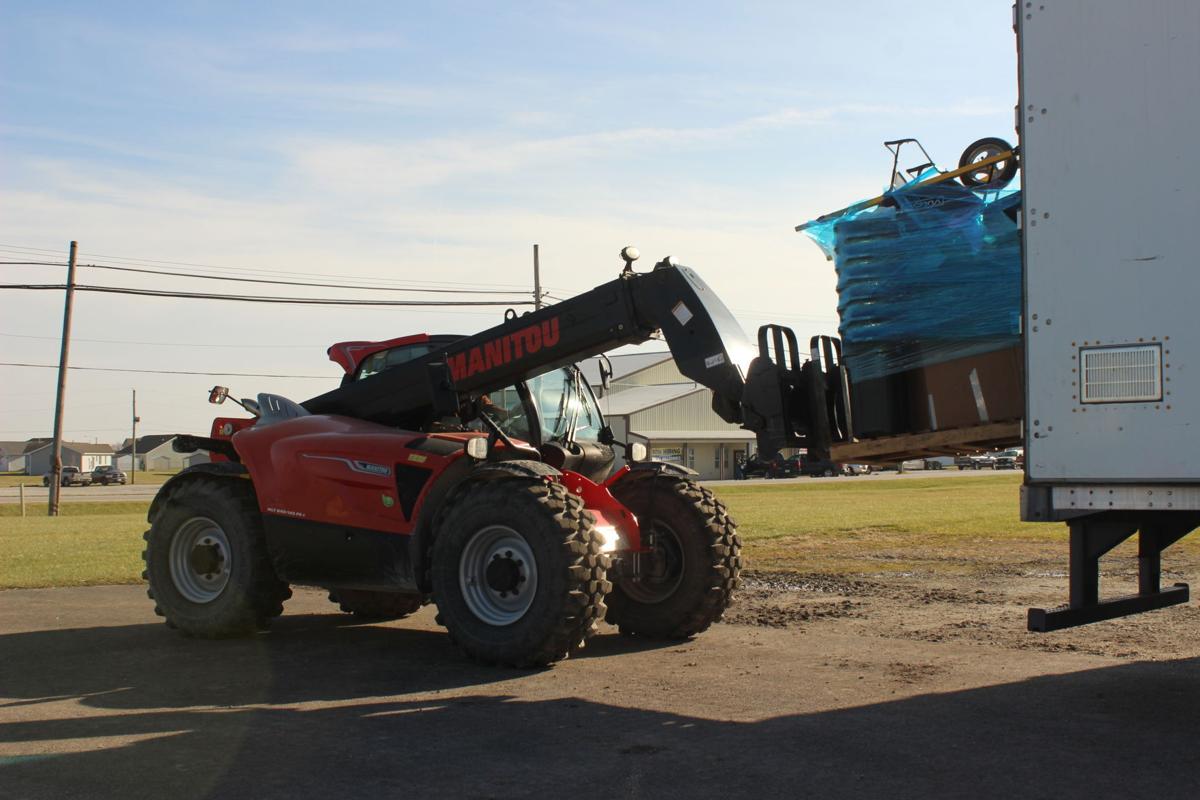 A pallet of donations from Tractor Supply Rensselaer is loaded onto the second semi trailer waiting on the Castongia lot, prior to departure for Mayfield, Ky. 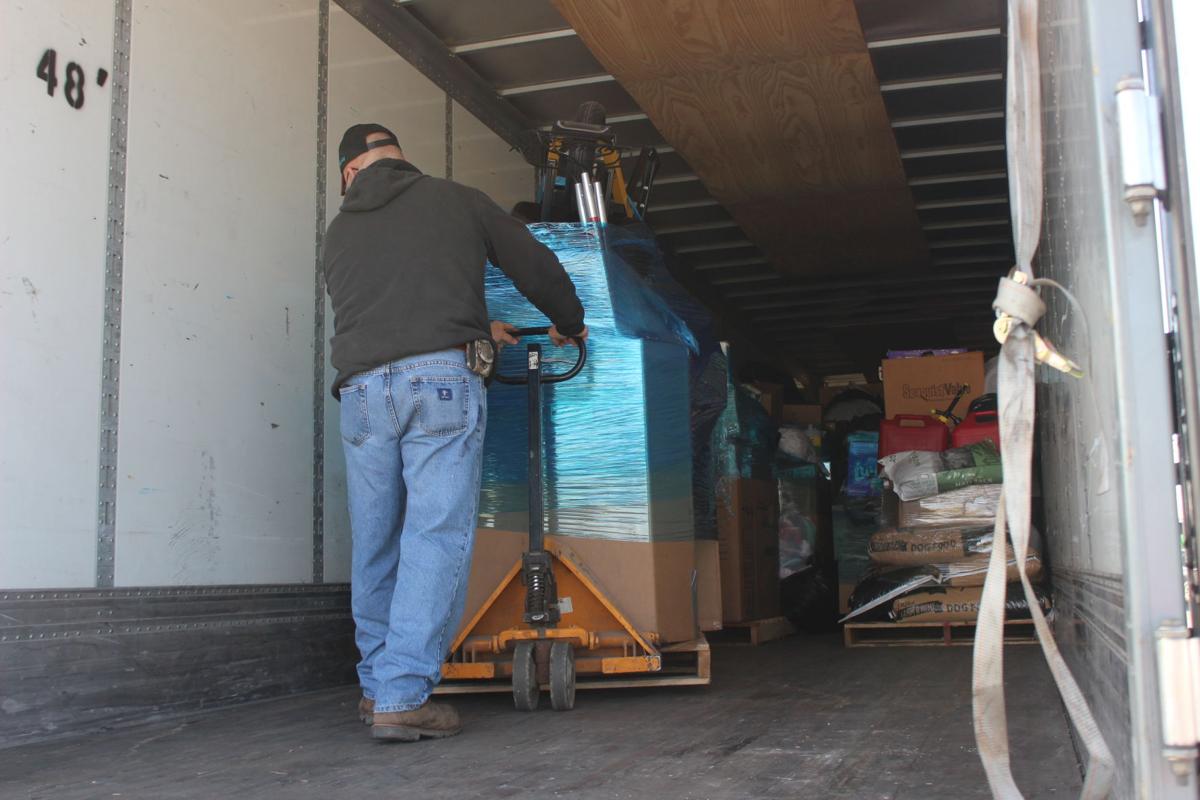 A pallet of donations from Tractor Supply Rensselaer is loaded onto the second semi trailer waiting on the Castongia lot, prior to departure for Mayfield, Ky.

RENSSELAER — Early in the morning of Dec. 17, two semi trailers packed with donated goods made their way south toward Mayfield, Ky., hoping to bring some relief to the community.

Following the devastation of the tornadoes that impacted communities all across the country, the citizens of Mayfield found themselves at a loss. With an official death toll in the mid-70s, homes and businesses destroyed, and infrastructure in limbo, the community was in a poor state for the holidays.

Many people saw this as an opportunity to come together and bring hope to people who may not have it, and they set about organizing a way to give.

The town of Rensselaer became a hub for those who wished to give, and donations came flooding in from across the northwest Indiana area.

From Rensselaer, Francesville, DeMotte, Lafayette, South Bend, Gary, Monticello, Rochester, Remington, and even further afield, donations came to this location as people sought to bring hope to the people of Mayfield.

One man, Ron Barlow, was credited with getting the initiative started.

“I posted on Facebook that I’d like to get some stuff to take down to Kentucky, and then the Rotary guys picked it up,” he said. “They say I’m the initiator, but I don’t know about that. Getting the volunteers here, some local farmers — that’s what I did. It’s amazing. I’m still shocked at how many people have come in and have been able to give as much as they did.”

After being picked up by the Rotary Club of Rensselaer, the donation drive only picked up steam. Businesses in the surrounding area began offering their sites as drop-off points for donations, and it quickly became apparent that the 10-foot pull-behind trailer they initially intended to fill would be overwhelmed.

Moore Trucking stepped in, offering two 53-foot semi trailers to be filled and driven to Kentucky. To provide space for these trailers to be filled, Jon Castongia and Linda Shide, who had been allowing donations to be dropped off in the entryway of the Rensselaer John Deere Dealership, offered the Castongia lot.

DeMotte Chamber to bring back Touch of Dutch in 2022

“It started out as a very simple idea, and we were going to be a drop for that in our little entryway until they filled up that little trailer,” said Shide. “We’ve filled up that entryway ten times. I think that we have all tried to put ourselves in Maysfield and that area’s position, and how we would feel having different parts of the country come in like this. How it would feel to know that maybe people do still care and come together.”

For nearly a week, volunteers and local farmers stood out in the cold, boxing donations and loading pallets onto the semis that sat in the lot, as monetary donations flooded into the Rotary Club of Rensselaer’s Facebook page, attorney Ned Tonner’s office, and Precision Glass. By the night of Dec. 16, nearly $10,000 was raised by this effort, and while some was used to purchase goods from local businesses and fund the drive down to Kentucky, the majority went directly to the Rotary Club of Mayfield, who intend to use it to restore the community.

“People want to help, if you give them the opportunity,” said Tonner. “People have been coming in and out of my office all week, so excited to have something to give.”

A full list of the businesses and organizations that donated to this cause has reportedly been difficult to collect, as many were not seeking recognition; however, some of the donors and supporters include: Smith Farm Stores, Kem’s Hardware and Lumber, Jasper Junction, Tractor Supply Rensselaer, and K&G’s Overstock Outlet.

Donations were not limited to businesses, with a multitude of donations coming in from individuals within the community who desired to participate in the giving.

“My wife is a part of the American Legion Auxiliary, and they’ve been helping out. She was doing some shopping, and some lady in Walmart asked what they were doing and just donated,” said Castongia. “It’s been a pretty amazing response. I think Wednesday, the first truck was about half-full, and by the afternoon, it was filled.”

Although the trailers have departed for Mayfield, the initiative is continuing to accept monetary donations through the Rotary Club of Rensselaer Facebook page, Ned Tonner’s Attorney at Law, and Precision Glass. News regarding any future item donations may be announced on the aforementioned Facebook page.

“It’s been an experience,” said Shide. “You learn a lot. Hopefully we don’t have to do it again for a long time, but if we do, we’ve got a little bit more insight. I had no idea what I was getting us into!”