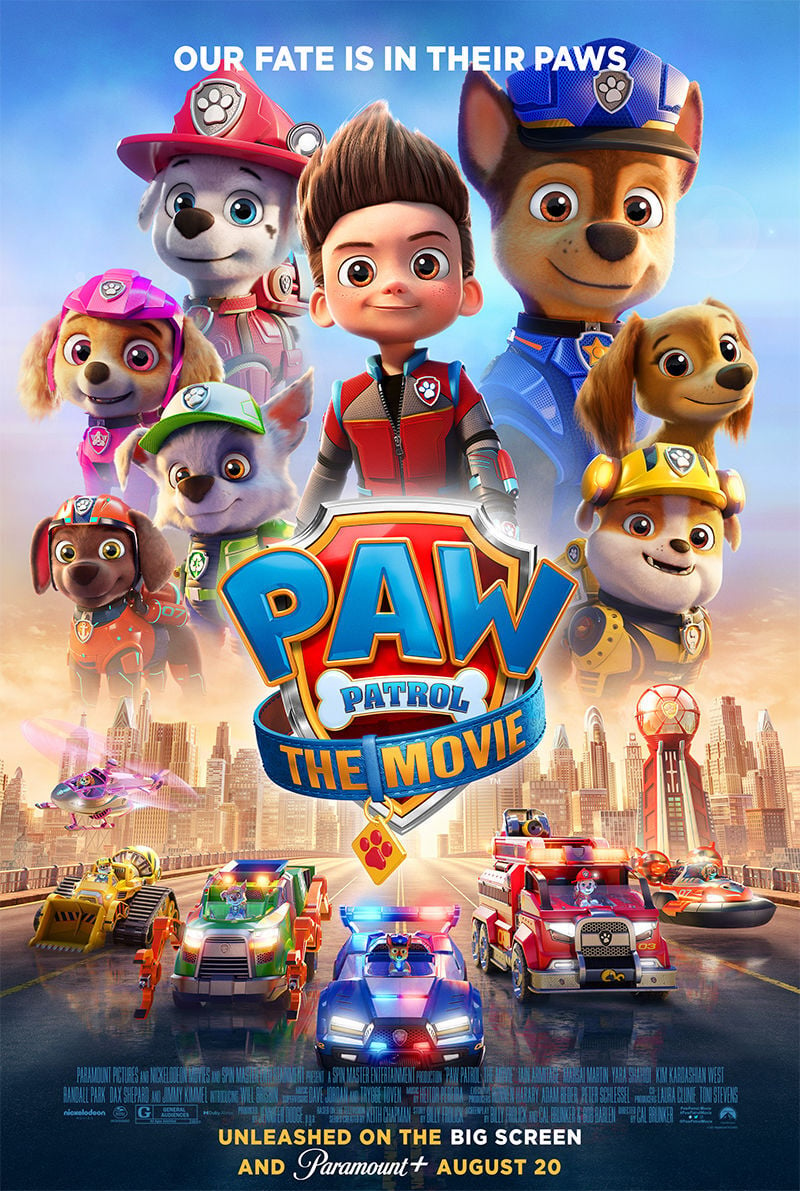 “PAW Patrol: The Movie” is playing in theaters and available for streaming on Paramount+. The film is rated G. Its running time is 86 minutes.

The animated “PAW Patrol” franchise doesn’t have the “for all ages” appeal of the best of Disney and Pixar. It’s from Nickelodeon, but it doesn’t even manage that channel’s trademark appeal to both kids and a certain brand of immature adult (“Ren and Stimpy” and “SpongeBob SquarePants” come to mind as examples).

No, this is strictly kiddie stuff, and as I am no longer a kiddie myself, nor do I have kiddies of my own, “PAW Patrol: The Movie” is not for me. The most fun I can get out of this movie is occasionally making snarky jokes out of harmless material.

Parents, you can at least enjoy how much your kids (and they have to be young kids, like kindergarten or lower) enjoy this movie, but there’s nothing here for you.

Simply having an evil mayor isn’t normally a reason to call emergency services, but in this case, it’s completely necessary. Over the course of the movie, Humdinger will set off a reckless fireworks display (I happened to see this film in a town where a similarly reckless fireworks display infamously took place about a decade ago), add a poorly-constructed loop-de-loop to the city’s subway, and cause a massive storm by overloading an educationally-purposed weather machine.

Humdinger, by the way, belongs to whichever political party you don’t like.

LIEBERMAN: The backstory behind the Medicare Advantage ads

The pup with the most personality is Chase, who’s afraid to return to Adventure City after a bad experience being abandoned there in the past. He’s got to learn a lesson about bravery so the film can meet the minimum requirement for substance, I mean, so he can save the day.

The film doesn’t put a lot of effort into its script or characters, but it sure puts a lot into the vehicles they drive, the buildings they inhabit, and the accessories they use. This is not a movie that is worried it’s too much of a glorified toy commercial. Ryder even makes a self-aware jab at the team’s merchandising at one point.

Maybe that’s why all the perfectly-capable dogs answer to a human — he knows a good marketing opportunity when he sees one.

This may be a strange comparison, but being in a theater with young kids for “PAW Patrol: The Movie” was a lot like being in the theater with teenage girls for “Twilight” back in 2008. The movie did nothing for me in and of itself, but the reactions of the fans in the audience was infectious. They were climbing on their seats, laughing and screaming at every little thing on screen, and loudly declaring that it was the greatest movie ever.

The audience at “PAW Patrol” got pretty rowdy, too.

“PAW Patrol: The Movie” isn’t for me, it isn’t for adults unless they’re accompanied by a kid, and it isn’t for kids over the age of about six. To me, the pace was too slow, the jokes weren’t funny, and the shilling of toys was too obvious.

But the kids in the target audience were having the time of their lives, so I can’t say the movie failed in its goal of reaching them. Let’s say it averages out to a C.