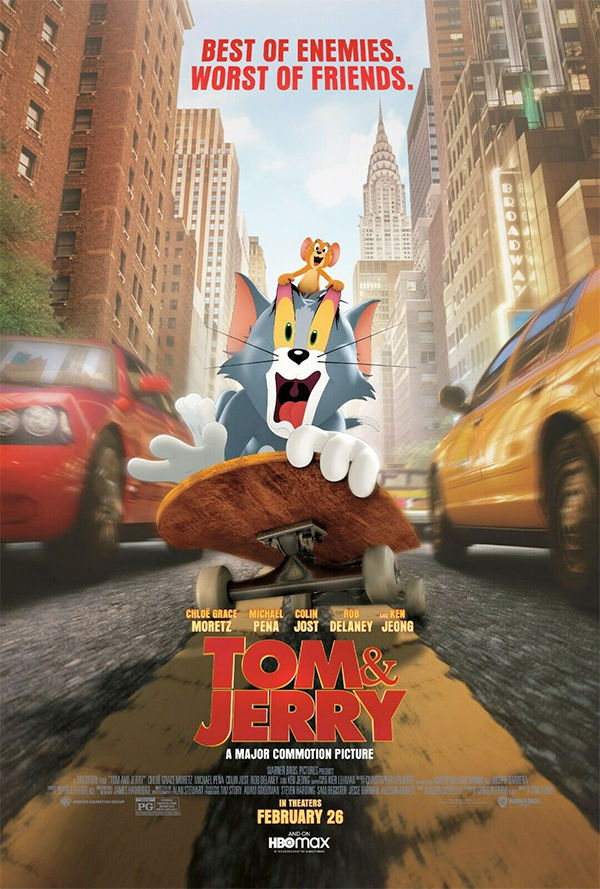 “Tom and Jerry” is playing in theaters and streaming on HBO Max. The film is rated PG for cartoon violence, rude humor and brief language. Its running time is 101 minutes.

I didn’t really grow up with the “Tom and Jerry” cartoon. I was more into Wile E. Coyote and the Road Runner, but I understand the two pairs have similarly adversarial relationships.

The key difference is that while Wile E. definitely wants to eat the Road Runner, I don’t think Tom the Cat would know what to do with Jerry the Mouse if he ever caught him. The two need each other as enemies to give their lives purpose.

The new film takes place in a world where all humans are live-action and all animals are animated. At least the animated animals are 2-D cartoons and not CGI abominations.

Tom moves to New York City with dreams of becoming a famous pianist. Jerry moves to NYC with dreams of lazing about in a luxury apartment. Frankly it’s hard not to side with Tom here for following his passion, as opposed to Jerry, who wants to get ahead with as little effort as possible.

Tom tries to earn a living by playing music for people in Central Park, and it takes just a few seconds of Jerry trying to upstage him by dancing for the entire act to be ruined and Tom’s only keyboard to be destroyed.

Tom’s not the only one to lose his job in the fray. Delivery girl Kayla (Chloë Grace Moretz) is knocked from her bike and her package destroyed, which gets her fired. She’s the kind of person who gets fired a lot, so now she’s really at the end of her rope.

She goes to a nearby hotel to soothe herself with free cookies, where she learns that they’re hiring temporary staff for an upcoming high-profile wedding between social darlings Preeta (Pallavi Sharda) and Ben (Colin Jost). She steals an impressive resume from a snobby applicant and cons her way into an interview.

Hotel General Manger Mr. Dubros (Rob Delaney) takes an instant liking to Kayla and hires her on the spot, but Events Manager Terence (Michael Peña) smells a rat – and he hasn’t even encountered Jerry yet.

High-strung chef Jackie (Ken Jeong) is the first to spot Jerry trying to make a home for himself in the walls of the hotel. Kayla is soon tasked with trying to remove the mouse as discreetly as possible, and she has the idea to outsource the job to Tom, who wants a new keyboard as a reward for thwarting his mortal enemy.

Of course, Kayla has greatly overestimated Tom’s competence (he tries to send Jerry away in a box without understanding how boxes work), and he and Jerry wreak far more havoc than if Jerry had just been allowed to keep to himself.

Basically what I’m saying is that the wedding cake doesn’t stand a chance.

Creatively, I don’t have much good to say about “Tom and Jerry.” The physical humor is predictable and played-out, and the emphasis on the live-action characters is ill-advised. I laughed at maybe one out of 10 gags, which puts the movie somewhere above “painful,” but not worthy of a recommendation.

As for the kids in the film’s target audience, I don’t think they’ll go for the movie either since it can’t match the frantic pace of the cartoon. Commercially, I’m begrudgingly proud of the film. It made a bit over $13 million at the domestic box office over the weekend, making it the biggest movie of 2021 so far in its opening weekend alone.

I’m glad something can open to $13 million in this era, even if it’s “Tom and Jerry.”