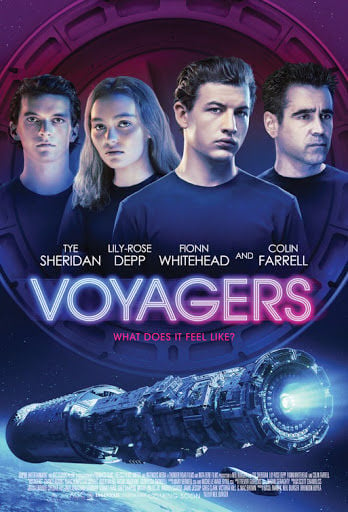 “Voyagers” is rated PG-13 for violence, some strong sexuality, bloody images, a sexual assault and brief strong language. Its running time is 108 minutes.

Before I get into trashing sixth-place weekend box office finisher “Voyagers,” I want to take some time to say some nice things about eighth-place finisher “In the Earth.”

The latter film played on less than one-third as many screens as “Voyagers,” yet it made nearly two-thirds as much money. The under-promoted horror movie is one of the most pleasant surprises I’ve seen in a long time.

And by “pleasant,” I mean in terms of quality, not subject matter, because there are some brutal scenes in that film.

But if the film is playing in your area, if you can handle an R-rated horror film, and if you can withstand a barrage of strobe and other potentially-nauseating lighting effects, then I recommend seeing it.

I would have given it a grade of B if I weren’t stuck reviewing “Voyagers,” a bomb that is playing on nearly 2,000 screens, but in its second weekend couldn’t beat “Tom & Jerry” in its eighth.

The film follows a group of kids bred specifically to go on an 86-year space mission to a distant planet that may be the key to saving humanity. The only adult onboard the ship is tutor Richard (Colin Farrell). As the mission slowly progresses, the kids grow into teenagers, their hormones and pleasure centers suppressed by a drugged liquid.

Two of the teens, Christopher (Tye Sheridan) and Zac (Fionn Whitehead) get wise to the druggings and experiment with not taking the drugs, in what I suppose is the opposite of the typical teen experimentation experience. Christopher handles his heightened senses reasonably responsibly, but Zac does not.

In what will no doubt go down as the most infamous scene in the movie, he commits an act of sexual assault on medical officer Sela (Lily-Rose Depp).

Shortly after, a scene of more traditional violence occurs as Richard is seemingly attacked by a space monster. Now the teens are left to fend for themselves, and they are angry, scared, lustful, and above all, dangerous.

Based on feelings toward the mission and fear of the monster, or “beast,” if you will, the teens break off into two groups. The more impulsive and animalistic crew members follow Jack, er, Zac; and the more levelheaded ones follow Ralph, I mean, Christopher.

And if you don’t know by now which book this movie is ripping off, let me just add that there’s a bespectacled girl named Phoebe (Chante Adams), whose name is close to Piggy, and things don’t go well for her.

Enough beating around the bush, this movie is “Lord of the Flies” in space.

The mystery of what happened to Richard is painfully easy to figure out, as is the mystery surrounding the space monster. As a matter of fact, I felt like I was always way ahead of any twist the movie was going to throw at me.

As for the action, it takes forever to get going, and when it does, the characters chase each other throughout the ship down what is almost certainly the same corridor set. It reminded me of that obviously-repeatedly-used staircase set from “The Big Bang Theory.”

I’d say stay away from “Voyagers,” but since the movie hasn’t risen above fifth place at the box office since it opened, it doesn’t seem people need to be told that. The actors are putting their backs into what must have seemed like a juicy script about sexual awakening in space, but between page and screen this movie just became blah.

I’m hoping that “In the Earth” builds up enough of a cult following among adult viewers (and it does need to be adults, and ones who can handle an assault on the senses at that) that I’ll wind up regretting the choice to review this lousy movie.