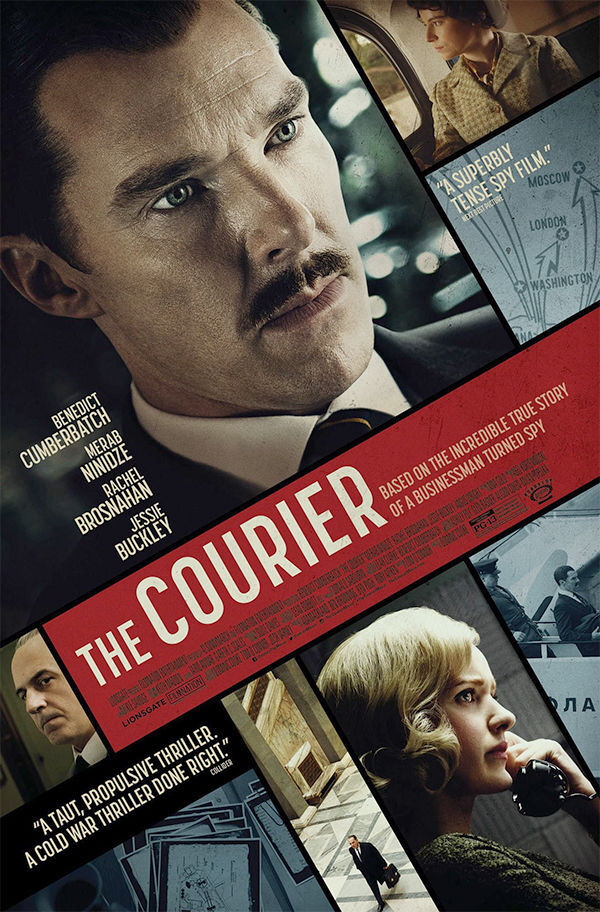 “The Courier” is rated PG-13 for violence, partial nudity, brief language, and smoking throughout. Its running time is 113 minutes.

The new film, “The Courier,” would have done well to open last month, before the cutoff date to qualify for the Academy Awards.

I doubt it would have gotten a Best Picture nomination, and Chadwick Boseman is such a lock for a posthumous Best Actor Oscar for “Ma Rainey’s Black Bottom” that nobody would care if Benedict Cumberbatch eked out a nomination for this film.

But it could have been a factor in the Best Supporting Actress race. I would not have been surprised if Rachel Brosnahan, Jessie Buckley, or possibly both pulled in a nomination for this film.

The awards buzz could have given this film its best shot at commercial success, because as it is, this is a bleak film whose bleakness doesn’t translate into Oscar gold or box office green.

Cumberbatch stars as Greville Wynne, a slick traveling salesman in 1960s England, as Cold War tensions are mounting. He’s approached by MI6 representative Dickie Franks (Angus Wright) and CIA agent Emily Donovan (Brosnahan) to do some spy work on an upcoming business trip to the Soviet Union. They need someone to act as a go-between with Soviet colonel Oleg Penkovsky (Merab Ninidze), who has decided to undermine his own government because Khrushchev is too eager to go to war.

Wynne fits the bill because he’s a civilian with no government connections, and because no reputable spy program would ever recruit him. He agrees only after promises are made about his safety, but Franks and Donovan don’t seem like the types to go out of their way to keep those promises.

Wynne makes several “business” trips to the Soviet Union, gradually building up a friendship with Penkovsky. But he’s affected by the danger of these missions, and his wife Sheila (Buckley) can tell something is wrong. She thinks he has a more extramarital reason for repeatedly skipping the country.

BAIRD: Standing against wave of socialism, saying ‘No’

Wynne wants to tell her what he’s really doing, but that, of course, would compromise the missions, so he has to keep telling a series of unconvincing lies that she can’t stand.

Eventually Penkovsky feels the walls closing in around him and he needs to defect, something Donovan promised she’d help him do. But she can’t deal with him directly, her superiors and Franks want her to wash her hands of the whole thing, and it’s too risky to send Wynne anymore.

Wynne, however, feels a sense of obligation to his friend, and Donovan grows a conscience that even she didn’t know she had. She and Wynne travel to the Soviet Union to extract Penkovsky, but the plan is foiled. Wynne goes to a gulag, and the film turns into a prison/interrogation movie much like “The Mauritanian,” the film that won Jodie Foster a Golden Globe but came up empty in the Oscar nominations.

This film’s advertising didn’t make much mention of the jarring tonal shift of the imprisonment portion, maybe because it would be considered a spoiler, but the film is based on a true story, and it’s an unavoidable chapter.

The bad news is that even though the film is good with crafting suspense and despair, it doesn’t really work on the level of popcorn entertainment that a film in this slot needs to have.

I hate to disparage a film based on the timing of its release – especially in this era – but if I want to watch a depressing movie, however solid, I can watch an Oscar nominee like “Judas and the Black Messiah” and know that what I’m watching will be well-remembered down the line.