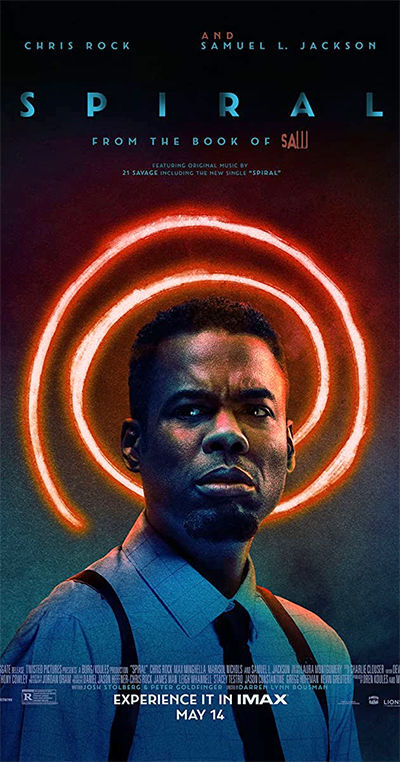 “Spiral” is rated R for sequences of grisly bloody violence and torture, pervasive language, some sexual references, and brief drug use. Its running time is 93 minutes.

This new flick, “Spiral,” comes to us “From the Book of ‘Saw,’” meaning that it’s a spinoff of the popular mostly-2000’s horror series.

The Jigsaw Killer is referenced a number of times in this film, but I assure you that, like Generalissimo Francisco Franco, he remains dead.

The Spiral Killer, for his or her part, has named themselves – don’t count out a team-up — after Jigsaw’s supposed philosophy of life evolving in a constant circle. I don’t remember Jigsaw ever extolling that philosophy. Is the Spiral Killer sure they picked it up from Jigsaw and not “The Lion King”?

The film stars Chris Rock as Detective Zeke Banks, the most unpopular cop in the department due to his history of turning in dirty colleagues. He’s only managed to keep his job because his father Marcus (Samuel L. Jackson) is a former chief. He’s forced by his current chief Garza (Marisol Nichols) into taking on a rookie partner named Schenk (Max Minghella).

Zeke is unhappy with the assignment because he works best alone, but at least Schenk is new enough to not know to hate him yet.

The partners banter a bit before investigating a truly revolting crime scene. This scene made the trailers interesting because it lured me into thinking that this would be a “Bad Boys”-like action comedy before going in a very different direction.

It speaks to how weird it is to see Chris Rock in a movie like this. But I like it. He brings energy to the role, even in unimportant scenes. Usually the only energy you see from the “Saw” movies is people’s desperation when they’re caught in traps and the clock is ticking.

Speaking of the franchise’s trademark traps, they’re here, but there’s less emphasis on them than usual due to the focus on the Rock and Jackson performances.

BOB AT THE MOVIES: Don't pass up chance to see delightful 'In the Heights'

In the opening, a guy has to sever his lying tongue or get hit by a train (why make the poor conductor feel responsible for a death like that?). Another person has to sever their itchy trigger fingers or get electrocuted. Another has to sever their spinal cord before they get suffocated by melting wax. Someone gets skinned in what may or may not be a trap. A fan launches broken glass at an individual (that’s not what “glass blowing” means!). An apparent bloodletting trap turns into something else entirely.

The victims are all cops or ex-cops, meaning that someone in the department is probably the Spiral Killer. Everybody takes turns looking suspicious, including Marcus and Zeke.

I figured it out right away from the trailers. I will say that no previous Jigsaw collaborator is at work here, unless we find out in a sequel that they were pulling strings from off-screen.

The killer(s), once revealed, are surprisingly inept at playing the villain. They over-explain in classic villain fashion but without classic villain passion, and they give themselves way too little time to escape and way too many chances to get caught.

That isn’t to say they don’t get lucky, though.

With “Spiral,” I liked Chris Rock’s performance and not much else. I’ve never been a big fan of the “Saw” movies, but I at least understand the appeal of the creative traps, which are underutilized here. I truly believe that “Saw” fans are going to be bored by this movie, save for Rock’s undeniable energy, because the Spiral Killer pales so much in comparison to Jigsaw.