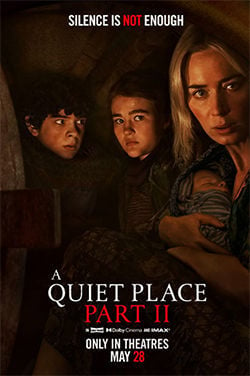 “A Quiet Place Part II” is rated PG-13 for terror, violence and bloody/disturbing images. Its running time is 97 minutes.

For over a year, “A Quiet Place Part II” was just out of reach. The film was originally supposed to open March 20, 2020. The week prior turned out to be the last for new releases before the pandemic shut down theaters.

The film was pushed back to May 2020, but of course theaters weren’t ready by then. The same was true of a later advertised release in September, when many venues were still closed. The studio even decided that April 2021 was too early, though theaters were open in limited capacity by then.

Given the film’s $48 million three-day domestic haul, I can’t say the decision to wait for a holiday weekend didn’t pay off. At least now I can stop seeing a trailer before every movie that indicates the release is just around the corner.

Part I of “A Quiet Place” ended with Lee Abbott (John Krasinski, also the director of both installments) sacrificing himself to the series’ hearing-sensitive bloodthirsty aliens in order to save his children, the deaf Regan (Millicent Simmonds) and hearing Marcus (Noah Jupe).

Evelyn Abbott (Emily Blunt, Krasinski’s real-life wife) successfully had her baby, stashed it in a soundproof box, fought off an alien, and took the kids away from the family’s now-compromised farm to look for safe haven.

Part II picks up with the family fleeing … after a prologue where the aliens first invade. I guess there was pressure to get Krasinski back on screen somehow, so he decided to do it in the form of a flashback.

After some uncomfortable-looking barefoot running, the Abbotts stumble across a bunker inhabited by their neighbor Emmett (Cillian Murphy), who fancies himself a survivalist, but isn’t doing well. After over a year of hiding from the aliens, his wife has died and he’s running out of food. He’s heartless enough to tell the mother and three kids that they need to leave in the morning.

Regan is only too happy to leave because she’s picked up on a radio signal that indicates safe haven on a nearby island that the aliens can’t reach. She runs away and Evelyn tasks Emmett with finding her. Emmett does track her down, but decides that she’s onto something with her island theory and joins her in seeing if it’s true.

However, they have to be weary of both the aliens and other humans who have gone crazy in the chaotic post-invasion world.

The film’s advertising has really played up the “villainous humans” aspect, but it’s really only a factor in one scene. The tagline “Silence is Not Enough” may as well refer to Marcus, who nearly gets himself and the baby killed with some bone-headed decisions back at Emmett’s bunker, decisions not always related to the aliens.

Then again, it was Regan who got at least one person killed in the first movie. I guess it’s believable, though frustrating, that kids would be making costly mistakes in this situation.

“A Quiet Place Part II” is a taut film, with no time wasted on nonsense like phony jump scares. The few peaceful scenes of hope and camaraderie are only there to be broken by the inevitable danger and urgency.

The ending is rather abrupt, as I was sure the characters’ journeys would take them further by the end of the film. But I guess we’ll have to wait for at least Part III for a proper conclusion.

And I’m sure there will be a Part III since Part II struck at just the right time.