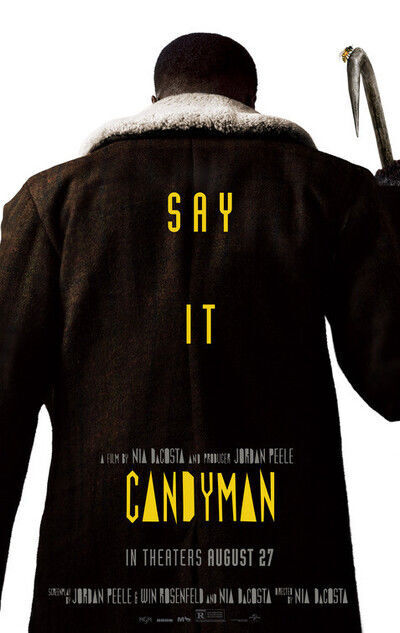 “Candyman” is rated R for bloody horror violence, and language including some sexual references. Its running time is 91 minutes.

1992’s “Candyman” was ostensibly a horror movie about an urban legend come to life.

Characters who uttered the name “Candyman” five times while looking in the mirror would meet a swift, brutal end … unless Candyman had even more diabolical plans in mind.

But the urban legend stuff was just the candy shell to a gooey center of racially charged commentary on everything from gentrification to police brutality.

The franchise had to take a break following two wonky late 1990s sequels, but it’s back in 2021, courtesy of writer/director Nia DaCosta and writers/producers Jordan Peele and Win Rosenfeld. With those names involved, you know the race-related social commentary isn’t going anywhere.

Anthony McCoy (Yahya Abdul-Manteen II) is an African-American artist who benefits a little too much from the people and world around him. He’s broke and doesn’t regularly work, but is supported by his gallery director wife Brianna (Teyonah Parris), and the couple as a unit benefits from the affordable housing rates of the gentrified Cabrini Green neighborhood in Chicago.

Anthony will go on to benefit from a well-timed opening at Brianna’s next art show, as well as better-than-no-fame infamy born out of one of his pieces featuring prominently in a violent news story.

After hearing about the Candyman legend from Brianna’s brother Troy (Nathan Stewart-Jarrett), Anthony goes to the ghetto to learn more from weirdo laundromat owner William Burke (Colman Domingo). Burke tells the story not of familiar Candyman Daniel Robitalle, but of Sharman Fields (Michael Hargrove), whose backstory also involves candy, a hook hand, and death by a corrupt version of the law.

Anthony throws together some so-so Candyman victim paintings that aren’t taken seriously by the industry’s higher-ups. These people are so unaffected that they perform the Candyman ritual sarcastically. Predictably, they pay dearly.

Anthony spends the rest of the film trying to answer questions about Candyman and his own, undeniable role in the Candyman legend.

Why is Candyman targeting his personal enemies? Why is he suddenly inspired to create much better art? Why is a simple bee sting on his hand causing his whole body to break out in burn scars? What has his mother (Vanessa E. Williams) been hiding from him?

And most importantly, is he Candyman’s next victim?

Brianna conducts her own investigation with an additional question: is Anthony responsible for the murders?

Here’s my question: how do the different Candymen (there are at least two more that I haven’t mentioned) decide which one will show up when Candyman is summoned? My guess: they draw Pixie Stix.

“Candyman” was completed prior to the death of George Floyd, an event that makes the film more relevant than ever, but which leads to a mixed message in one department. “Say His Name” was a sentiment echoed by the Black Lives Matter movement so Floyd wouldn’t be forgotten. This film adopts that phrase as a tagline.

But saying Candyman’s name is exactly what people shouldn’t do in this world, at least not five times, though it’s probably just better to avoid it altogether. I can’t help but notice the contradiction there.

“Candyman” is creepier with its atmosphere and untrustworthy characters than it is with actual scares. Most of the kills are pretty standard for slasher fare, save for one standout completely devoid of jump scares.

Certain scenes of body horror seem forced, with Anthony constantly picking at his new scars, possibly causing them to be worse than they are.

Perhaps worst of all is that the various iterations of Candyman are often surrounded by CGI bees, which aren’t scary in the least.

On the plus side, we get plenty of dizzying shots of Chicago skyscrapers, which serve to instill a fear of heights even when one is on the ground (and in a theater). Best of all, the film is bookended with well-crafted shadow puppets telling the most compelling stories I’ve ever seen shadow puppets tell.

I wonder: between the shadow puppets and a handful of Milky Ways, which will cause me to lose more sleep at night?