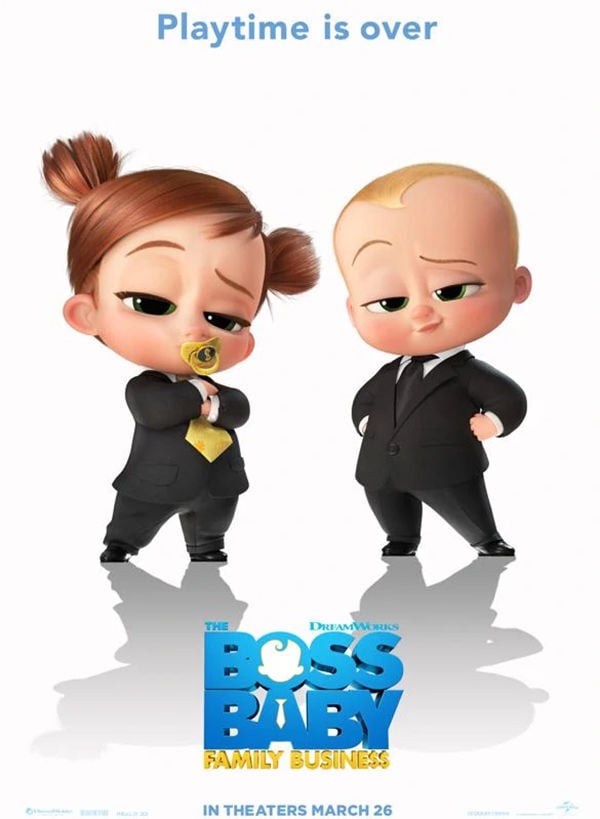 “The Boss Baby: Family Business” is playing in theaters and available on Peacock for home viewing. The film is rated PG for rude humor, mild language and some action. Its running time is 107 minutes.

Back in 2017, we were introduced top Ted Templeton, aka The Boss Baby (Alec Baldwin). The character, an infant with a personality somewhere between Baldwin’s “Glengarry Glen Ross” character and his Donald Trump impression, was a fictionalized version of the younger brother of narrator Tim Templeton (now James Marsden, replacing Tobey Maguire from the original).

Now Tim and Ted are all grown up and Tim has a wife (Eva Longoria) and two kids of his own.

Older daughter Tabitha (Ariana Greenblatt) is going to a competitive private school run by the demanding Dr. Armstrong (Jeff Goldblum) and pulling away from her well-meaning father and his overactive imagination. Younger daughter Tina is too young to talk, except when she turns out to be an employee of BabyCorp, the company that employed Ted in the first movie (and voiced by Amy Sedaris).

BabyCorp needs Tina, Tim and Ted for an assignment, one that requires Tim to revert to childhood and Ted to baby-hood. Well, the selling point of the movie wouldn’t make sense if Ted wasn’t back as a baby somehow.

The mission (I can’t help but notice that BabyCorp usually uses Ted for spy/secret agent stuff more than actual “business”) is to infiltrate Tabitha’s school and uncover a nefarious plan by Dr. Armstrong.

Armstrong is evil enough for running the school the way he does (the time-out room subjects children to Enya the way Guantanamo Bay blasts heavy metal), but he also has something more megalomaniacal in mind.

Goldblum is clearly having a blast voicing the villain, whose parentless existence allows him to indulge in unending junk food. He has such a sweet tooth that he eats sugar straight from the bag at one point. He also drinks nothing but soda, leading to a plot device I can only refer to as “Chekov’s Mentos.”

Ted stays hard-headedly focused on the mission, the same way he’s been focused on business all his life and never had time for a family of his own. The more sentimental Tim uses this rare second shot at childhood to subversively befriend Tabitha, who to his delight is smart and kind even when her parents aren’t around, but is also sadly insecure in her singing talents and a popular target for bullies.

Tim gives her a crash course in music appreciation in the form of a musical number that frankly seems like it would have been more at home in Pixar’s “Soul” than it is here. I don’t know how Tabitha could fail to recognize her father just because he’s a child when he still has Marsden’s grown-up voice.

Tim becomes more fixated on Tabitha’s solo at the upcoming Christmas pageant (July 4th weekend was not the most appropriate choice for this movie’s release) than he is on saving the world, leading to a falling-out with Ted that will. of course, be resolved right before the big finale.

For an animated movie about talking babies, “The Boss Baby: Family Business” sure crams in a lot of story, side characters and gags. In many ways that’s a good thing. It proves that the movie isn’t afraid to be complex. But in other ways it’s a bad thing, because this movie seems overcrowded and unfocused – just like Tim’s mind.

There’s imagination to a number of sequences, like in a chase through a crowded downtown on a pony that doesn’t respect Tim. And I suppose I laughed at a fair number of gags, maybe a third. But overall the movie is too lowbrow and muddled.

It’s not the worst choice for a family movie night, but Pixar’s “Luca” and “Peter Rabbit 2: The Runaway” should be considered higher priorities.