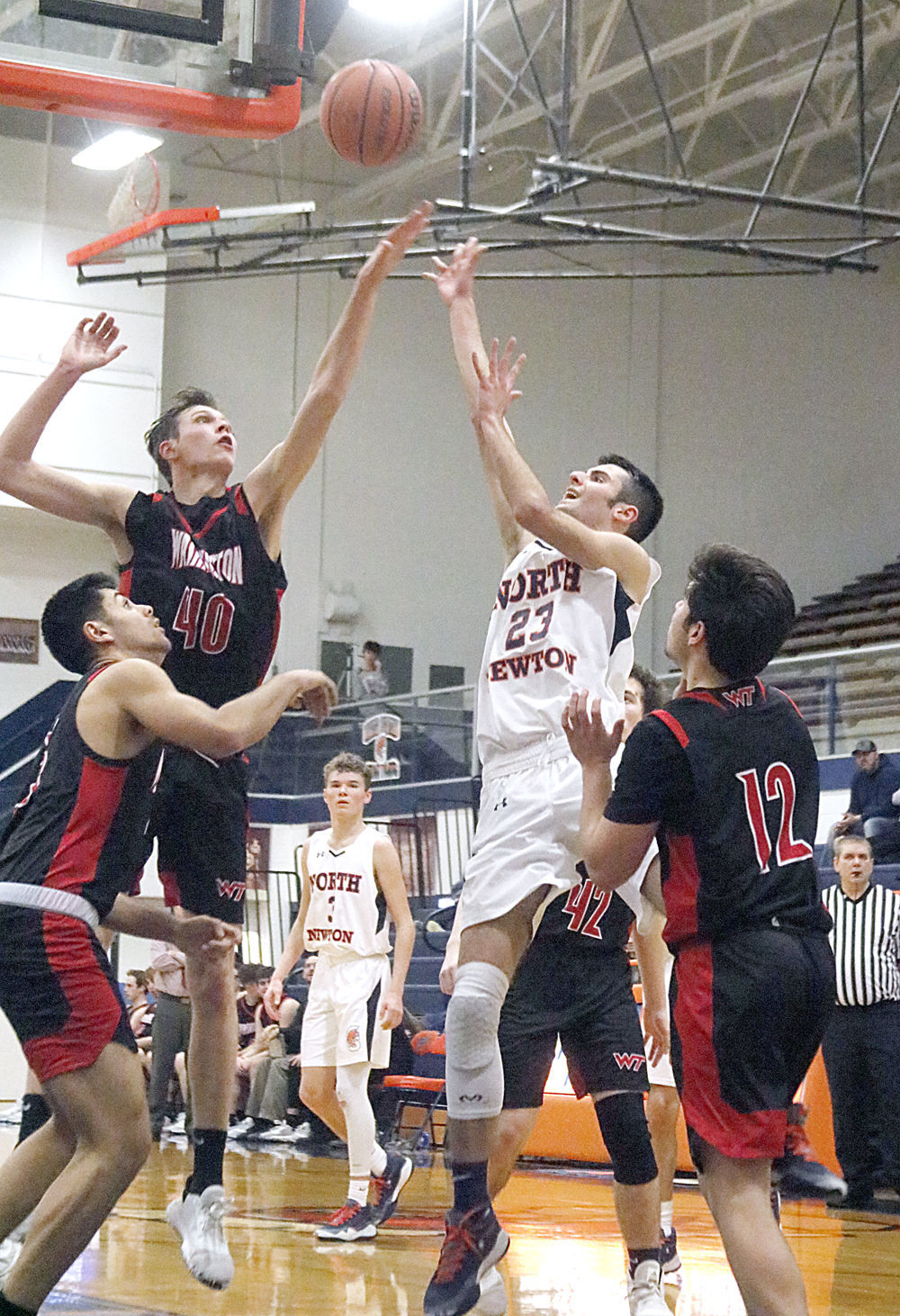 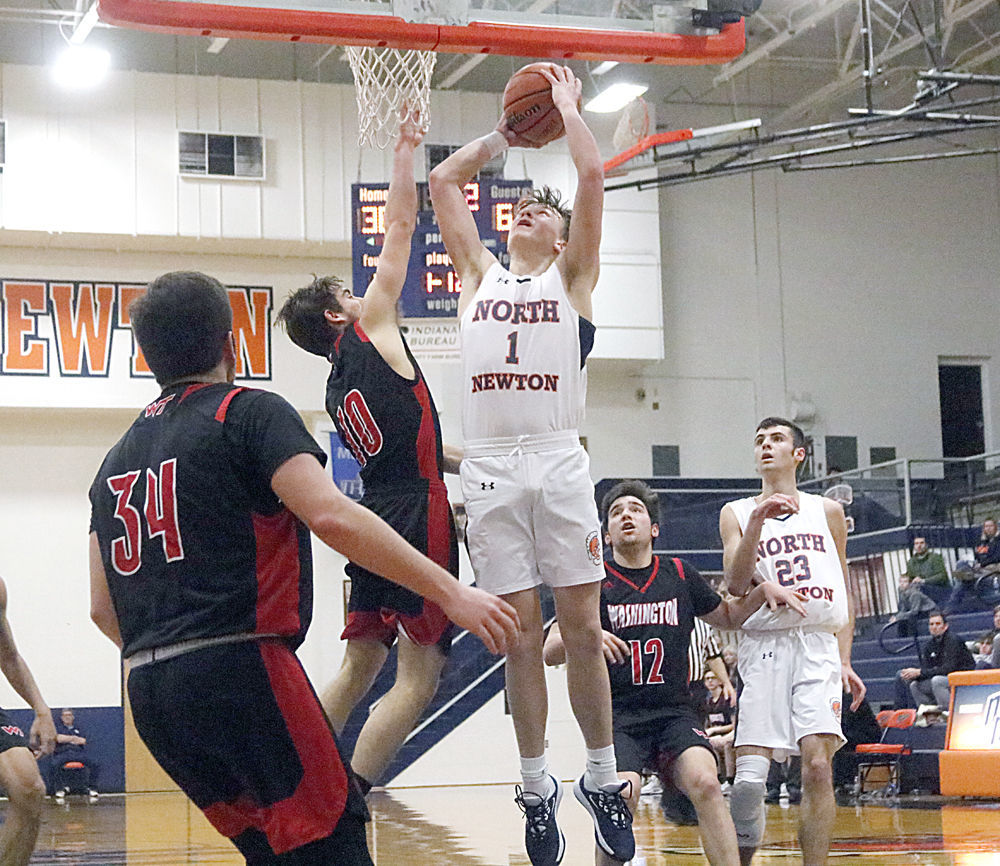 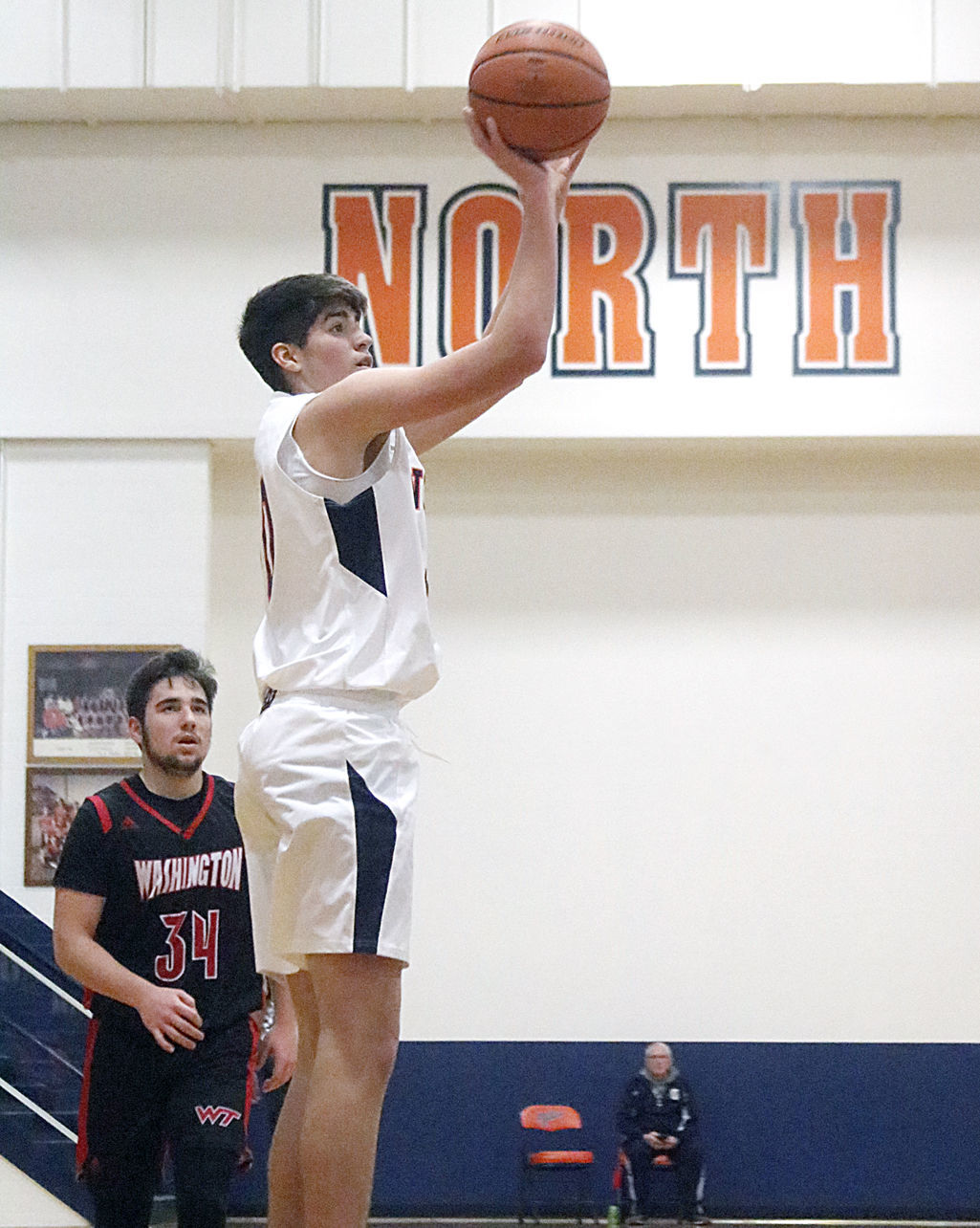 North Newton junior Cade Ehlinger fires up a shot from just outside the lane against Washington Township Feb. 15.

North Newton junior Cade Ehlinger fires up a shot from just outside the lane against Washington Township Feb. 15.

MOROCCO — North Newton battled Washington Township tough throughout the first half, but the Senators’ size and skill took over in the second half to run away with an 81-51 win Feb. 15.

The Spartans trailed by just eight points at halftime but were outscored 27-12 and 18-11 in the second half.

“I told our kids that anytime you play a team that has 6’7 or taller kid that we are not going to out jump him and that they have to be fundamental and limit the touches he gets,” said North Newton coach Sam Zachery. “They are a really good team that plays in a tough conference. Most of those teams in the Porter County Conference don’t really have a fall sport so they are focusing on just basketball for most of the year.”

Both teams came sprinting out the gate as Braden Merriman led North Newton with seven first-quarter points which included a 3-pointer, but Washington Township junior James Hernandez scored 16 of his team’s 18 points in the opening quarter as the Senators led 18-16 at the end of one period of play. The only points he didn’t score was an alley-oop slam dunk by 6’8 senior Austin Darnell.

Baskets from Merriman and Dylan Taylor accounted for a 4-0 run to start the second quarter and the Spartans were up 20-18.

Washington Township answered with a 15-2 scoring run to take an 11-point lead before North Newton ended the half with a 6-3 run to trail just 36-28. Hernandez and Darnell each scored seven points to pace the Senators, while Austin Goddard had five points including a late clutch 3-pointer, and Taylor had a pair of baskets.

“I was really happy with how we played in the first quarter,” said Zachery. “We took advantage of their press by getting to the middle of the floor, moving the ball well and attacking. We hit some early threes and we were playing well. We had a little gap of about a minute or so in that second quarter where we had some turnovers and they made some outside shots but we were still in the game and fighting.”

The Senators took total control in the third quarter as they scored on 10 of their first 12 possessions of the period. Darnell connected on two 3-pointers and had eight points in the quarter. As a team, Washington Township connected on four trifectas in the third.

Merriman led the Spartans with six points in the third, while Taylor added four.

“We talked at halftime about taking care of the ball and then like on most nights we had that three-minute spell where we kind of lose our minds and we start lobbing the ball and making bad passes,” added Zachery. “That led to a snowball effect where we were down 13 and then we were behind by 20. We have to be mentally tough, we got some decent looks, we just have to take care of the ball better during those crucial times.”

Washington Township opened up the fourth quarter on a 9-0 run to go up by 30 points. North Newton played the Senators even from there but couldn’t mount a comeback over the final minutes of play.

Merriman finished with 18 points to pace North Newton while Goddard had 13, Cade Ehlinger scored nine, and Taylor had eight.