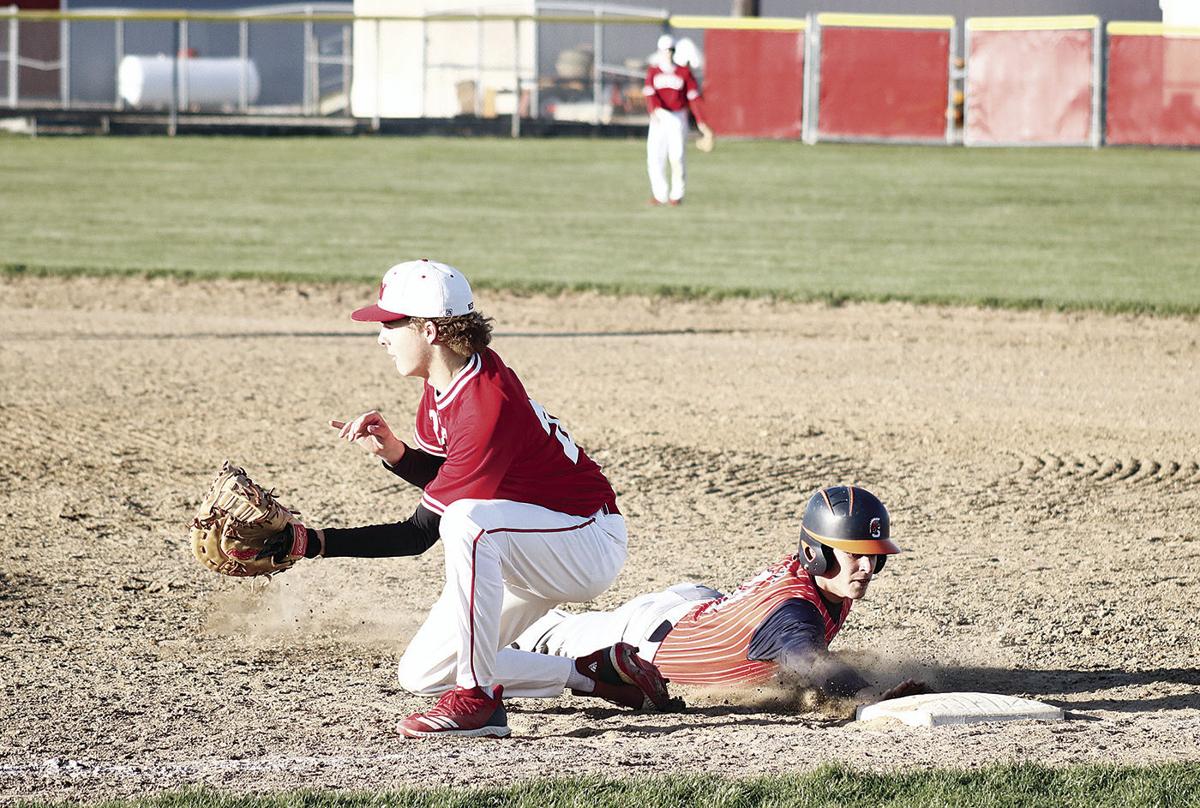 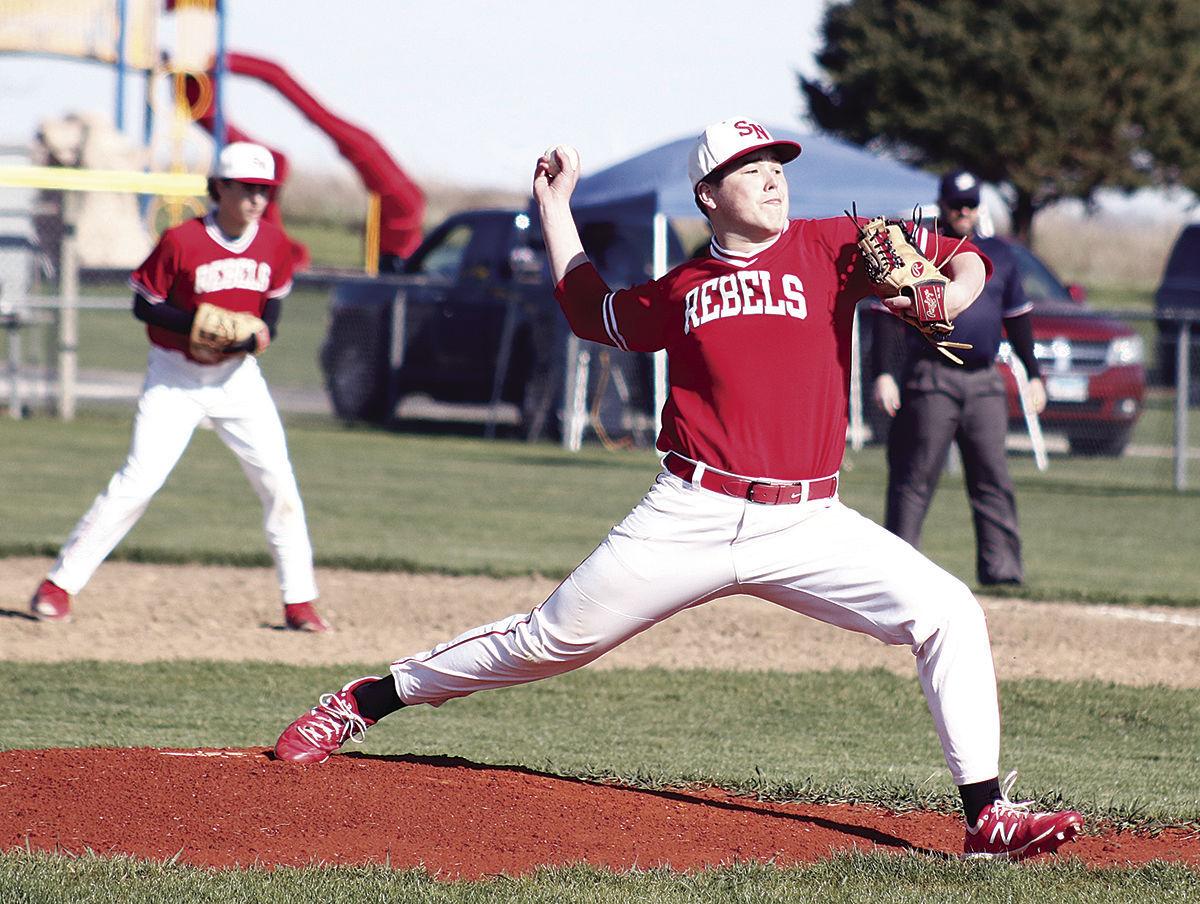 South Newton junior Kellen Krug started the game on the mound for the Rebels against North Newton. 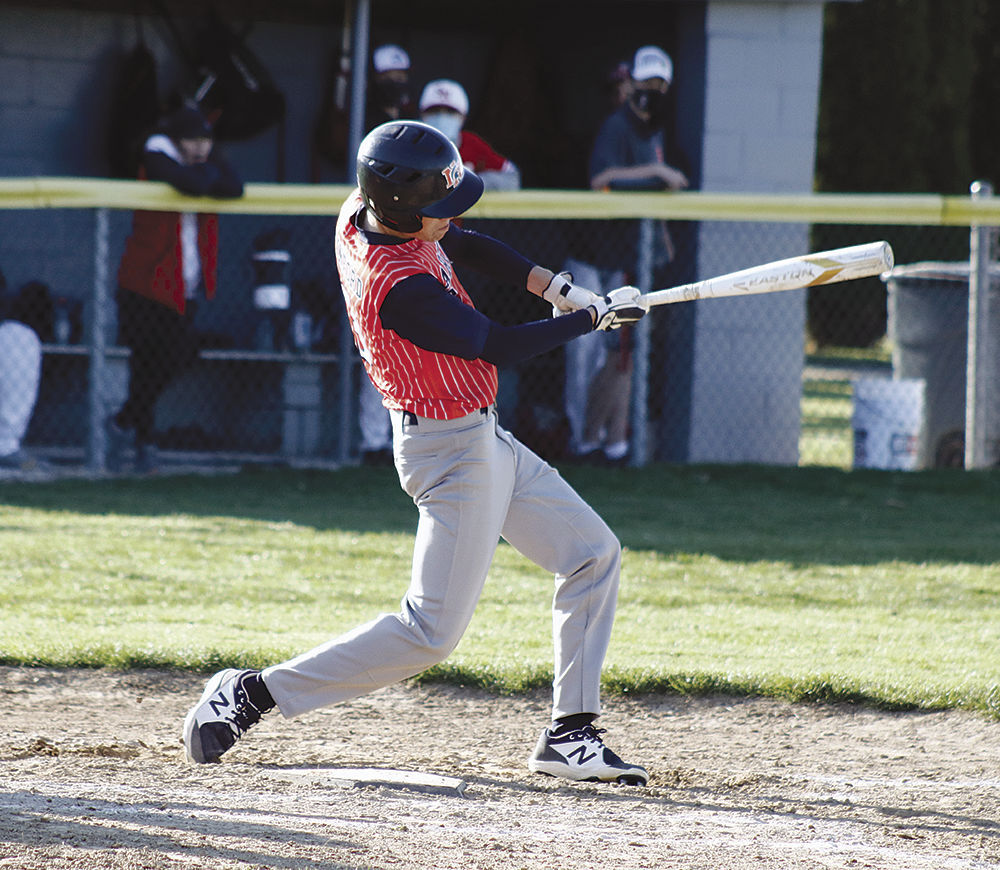 North Newton junior Bryce Rainford drove in three runs to lead the Spartans to a win over South Newton.

South Newton junior Kellen Krug started the game on the mound for the Rebels against North Newton.

North Newton junior Bryce Rainford drove in three runs to lead the Spartans to a win over South Newton.

KENTLAND — After a wild first inning where North Newton and South Newton combined to plate seven runs, the game settled down and the Spartans finished out the game strong for an 8-5 win April 13 in the Midwest Conference opener for both teams.

The win was North Newton’s first of the season as the team improved to 1-4. The Spartans used a pair of freshman hurlers to pick up the win over their in-county rival. Evan Gagnon tossed 3.3 innings allowing five runs on five hits and five walks while striking out four to get the win. Patrick Barry finished off the game allowing no runs on two hits and no walks while fanning four.

“Gagnon was a little wild in the first inning, but he settled down and did well for us,” said North Newton coach Mike Atwood. “I felt that he got stronger and stronger as the game went on. Barry came in and did a real nice job throwing strikes and staying with himself. We have a lot of arms but we don’t have that standout ace yet. Gagnon could be that guy for us. (Austin) Goddard pitched well for us the night before in a close loss to Rensselaer. For us to be successful this year, we will have to play good defense.”

“Kellen is our go-to guy and we could tell after the end of the first inning he started to settle down and battle,” said South Newton coach Connor Ulmer. “He always wanting to play hard and it’s great to see that fire in him.”

The Spartans opened up the game by scoring four runs in the top of the first inning off of three hits and two walks. Junior Bryce Rainford drove in the game’s first run with a hard-hit double to left field and he was brought in by an RBI groundout from Barry. Cade Ehlinger singled and found a way to score later in the inning on a wild pitch, and Gagnon helped his own cause with an RBI groundout for the fourth run.

South Newton wasted little time answering back. Freshman Evyn Krug started the frame off with a single, followed by a walk to Kayden Cruz. The elder Krug would drive in his younger brother with an RBI groundout just a batter later to crack the scoreboard. Cruz scored the second run off a wild pitch, and a single from Ian Wernert followed by a North Newton error accounted for the third run of the inning. The Rebels plated the three runs off of two hits and three walks.

South Newton took over the lead in the bottom of the second, 5-4, scoring two runs off two hits and an error. K. Krug drove in his second RBI with a single and Wernet hit a sac fly to give his team the lead.

An RBI single from North Newton’s Conner Scotella tied the game up 5-5 in the top of the third inning.

The Spartans reclaimed the lead in the fourth as Rainford drove in his second run of the game with an RBI single. That lead would hold up as Barry would hold South Newton off the scoreboard for the rest of the game.

Goddard’s RBI infield single in the fifth pushed the lead up to 7-5, and Rainford picked up RBI number three in the seventh for the game’s final run.

“We faced some pretty good competition early on and it’s always nice to get that first victory especially when it’s a rivalry game and a conference game,” added Atwood.

For South Newton, the loss snapped a two-game winning streak as the Rebels fall to 2-4 on the season.

“I’m very proud of the guys and how they fought, and how they competed for the entire game,” said Ulmer. “In my opinion, this is one of the first complete games that we have played as a team.

On Saturday the Rebels scored 16 runs off 13 hits to run past Attica 16-2 for the team’s second win of the season.