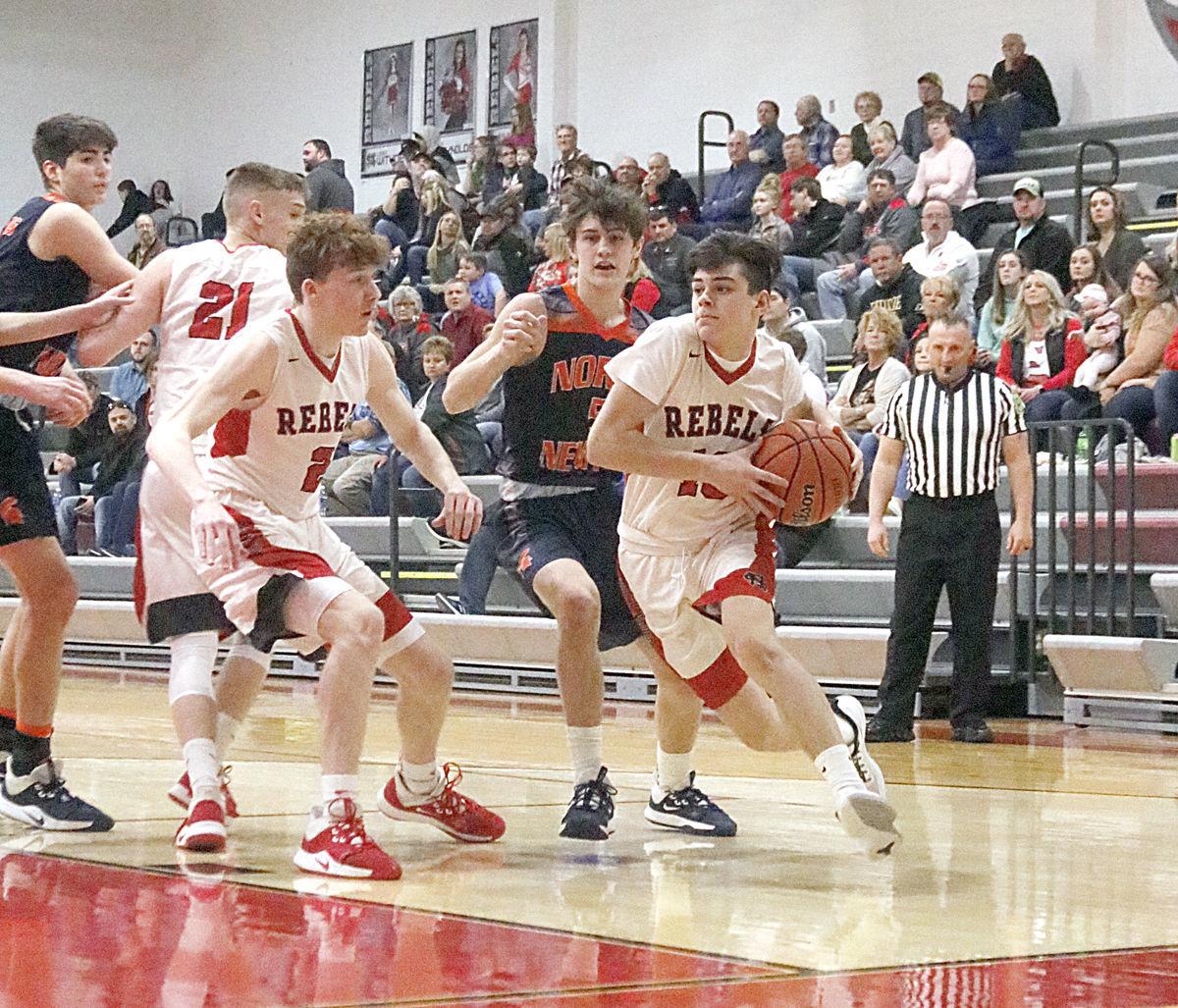 South Newton sophomore Kayden Cruz finds some room along the baseline in the Rebels’ win over North Newton. 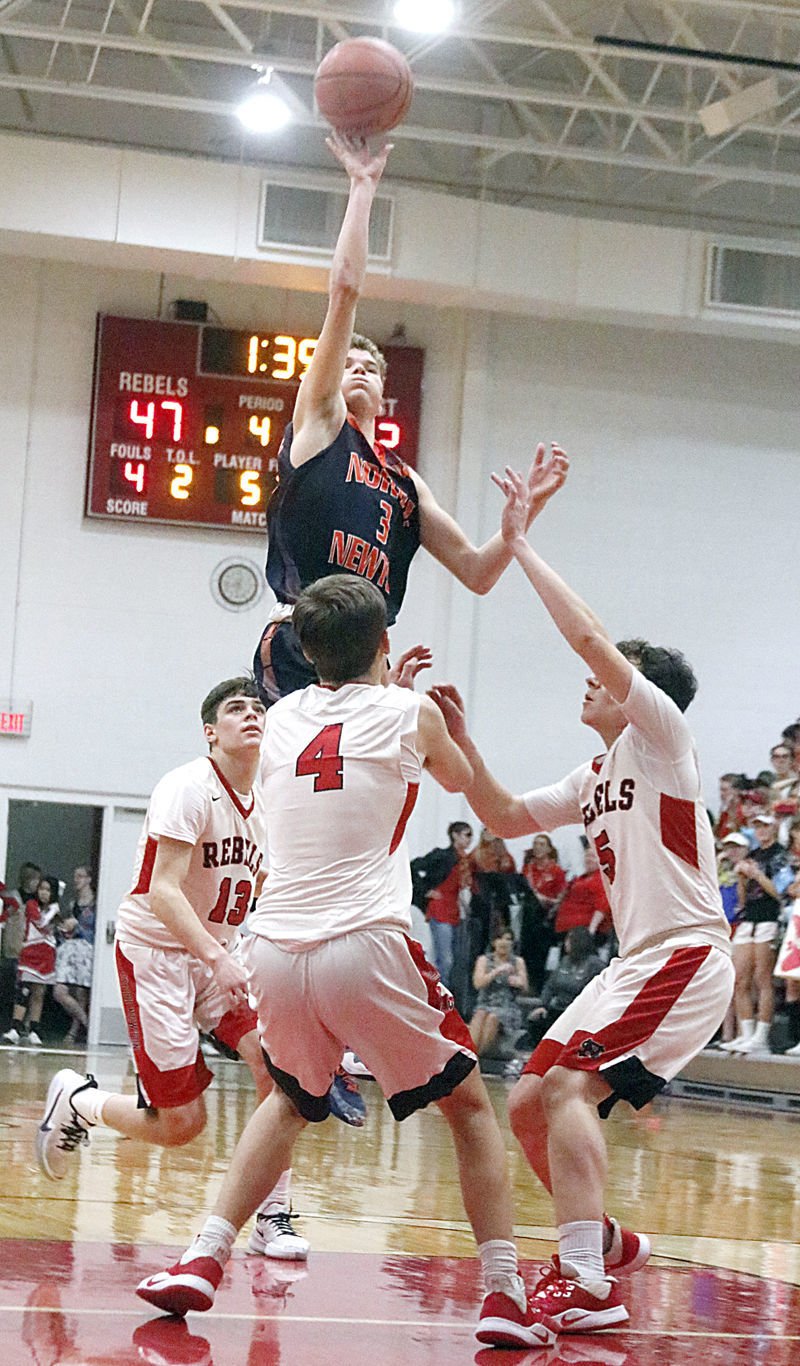 North Newton junior Austin Goddard (3) skies to get off a floater in the loss to South Newton.

South Newton sophomore Kayden Cruz finds some room along the baseline in the Rebels’ win over North Newton.

North Newton junior Austin Goddard (3) skies to get off a floater in the loss to South Newton.

KENTLAND — South Newton held off a late furious rally from North Newton to retain the Newton County Cup via an exciting 50-48 victory Feb. 22.

The Spartans rallied from an 11-point fourth-quarter deficit to tie the game after a Braden Merriman score with 1:05 left in the game.

A South Newton turnover gave the Spartans possession of the ball and they looked to burn clock and take the final shot of the game. North Newton was looking for a game-winner or overtime, however, in what has been a major issue for the Spartans this season, a late turnover led to a transition basket from Kayden Cruz as his layup gave the Rebels a 50-48 lead with 5.7 seconds remaining.

North Newton got the ball to junior Austin Goddard and he was able to go the length of the court and get off a floater. The shot hit off the back of the rim, up and then again on the left side of the rim and off. The Rebels and the hometown fans erupted in celebration as the Cup will remain at South Newton.

North Newton led after one quarter of play, 13-10. Goddard and Griffin Swank each made a 3-pointer and have five points to pace the Spartans.

South Newton 6’6 senior Nathan Clifford scored his team’s first six points of the game, but he also picked up three fouls and did not play again until the second half.

The offensive pace picked up for both teams in the third quarter. South Newton pushed its lead up seven points after two free throws from senior Seth Bishop, but North Newton answered right back.

Dylan Taylor drained a 3-pointer and followed up a possession later with a layup to spark a run by the Spartans. A few seconds later, Braden Merriman scored from inside the paint and South Newton’s lead was down to two points, 33-31.

Sammons responded with four points and Clifford added three points to account for a 5-0 run by the Rebels to end the quarter up 38-31.

A couple of free throws from Riley Patterson and a basket by fellow senior Terron Welsh and the Rebels were up by 11, 42-31 with 6:41 to play in the game.

Merriman carried the Spartans in the fourth quarter, scoring nine points including a three-point play, while Robbie Domonkos nailed a clutch 3-pointer.

The Rebels, however, would stay composed over the final minutes of the game as Cruz came up with some key points in the quarter including the game-winner.

South Newton was 20 of 27 from the foul line, while the Spartans had struggles from the charity stripe, going just 5 of 12.

Sammons finished with 13 points to lead South Newton, while Cruz had 12, and Clifford added 10.

Merriman led the Spartans with 15 points, Goddard had seven, and Swank and Rainford each had six.

With the win, South Newton improved to 3- 17 and finished 2-3 in the Midwest Conference, while North Newton fell to 3-17 overall and 2-2 in conference play.