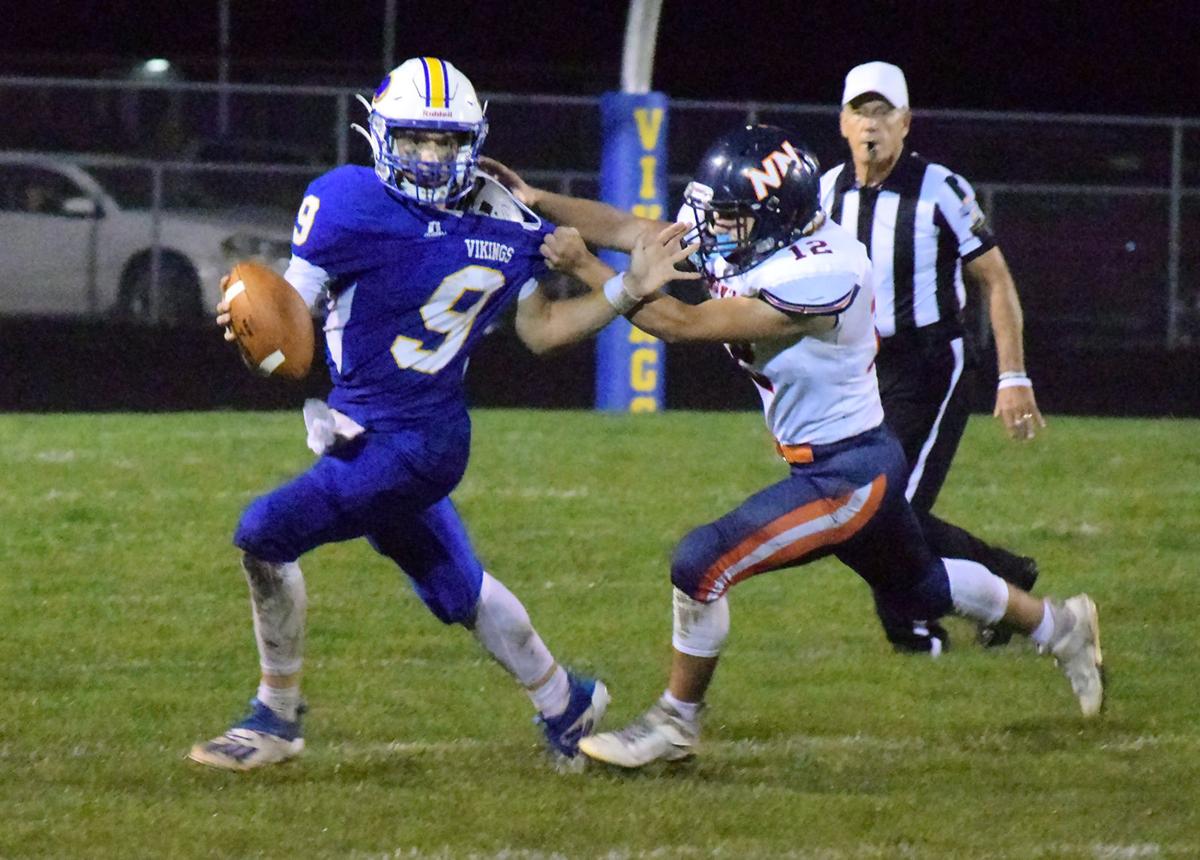 North Newton’s Caleb Johnson latches onto North White quarterback Eli Quasebarth and attempts to tackle him by his jersey. Quasebarth managed to get rid of the ball and avoid the sack. 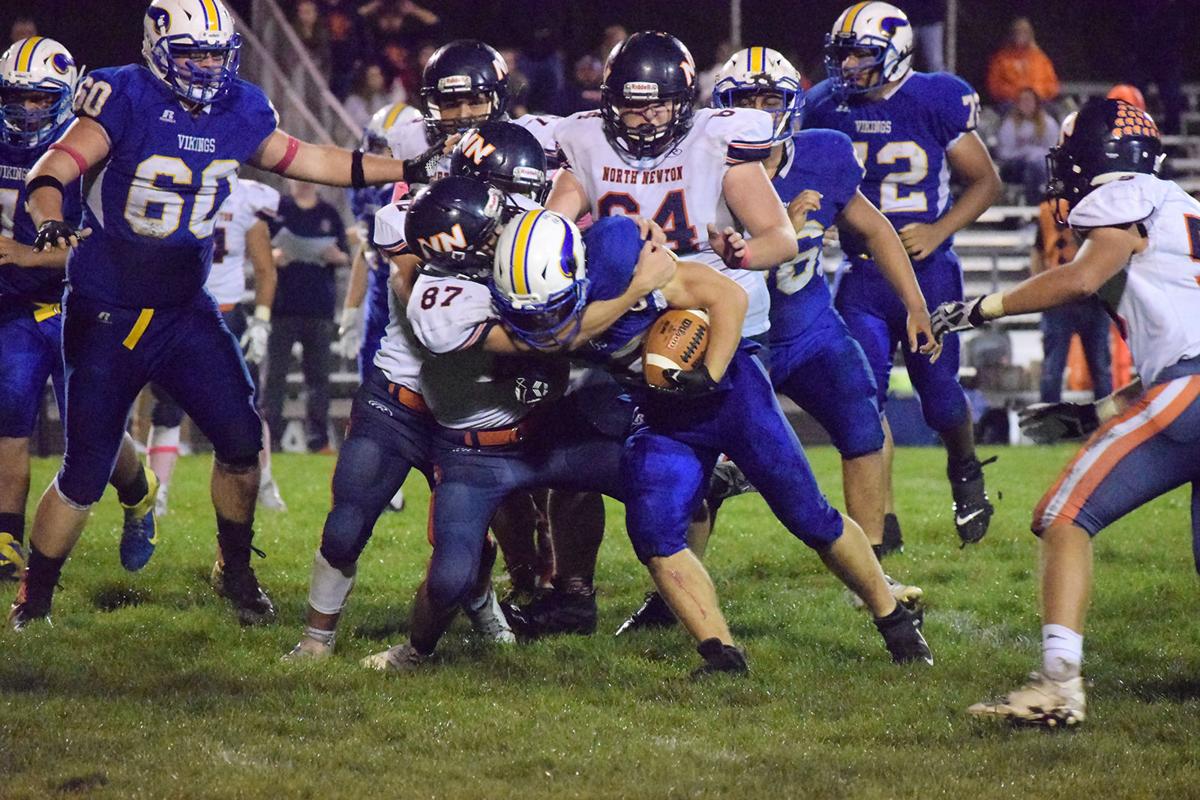 North Newton’s Caleb Johnson latches onto North White quarterback Eli Quasebarth and attempts to tackle him by his jersey. Quasebarth managed to get rid of the ball and avoid the sack.

MONON — North Newton piled up nearly 400 yards of total offense — all but eight yards of it on the ground — and clinched at least a share of the Midwest Conference championship in a 38-13 shellacking Oct. 8 of North White.

“This was a big one,” North Newton coach Scott Rouch said. “We needed to come in and do what we needed to do and get a win. It’s not over. We’ve clinched a share but we want the whole thing on our own.”

Kadyn Rowland was North Newton’s workhorse, picking up 175 yards on 31 carries and scoring three touchdowns. Lane Zander, who had a 94-yard touchdown run in the fourth quarter, finished with 121 yards on four carries

“They did a nice job against our run game,” North White head coach Kirk Quasebarth said. “They made us do what we didn’t want to do – and that was go to the air. They flat-out beat us up front. That was the name of the game.”

While Eli Quasebarth was limited in his run game, he made the most of his aerial attempts, completing 10 of 24 passes for 159 yards and a score. He was also intercepted once and had about three more that were dropped by the North Newton defense.

Kade DeBoard grabbed seven passes for 112 yards and a TD for the Vikings.

North Newton’s ground game — the Spartans completed 1 of 2 passes for 8 yards — also helped it manage the clock and keep the Vikings’ offensive off the field. All told, the Spartans controlled the clock almost 10 minutes longer than North White, 28:47 to 19:13.

“We wanted to limit their opportunities,” Rouch said. “Our defense did that and our offense kept them off the field.”

Bevis is Region 4 football coach of the week

The game was close for about two-and-a-half quarters.

North Newton quarterback Evan Gagnon opened the scoring with a 4-yard run to stake the Spartans to a 6-0 lead, but North White cut the deficit in half with Selvin Villatoro’s 37-yard field goal in the opening seconds of the second quarter.

North Newton made it 14-3 on Rowland’s 4-yard run with 2:07 left in the first half, but Eli Quasebarth completed a 28-yard touchdown strike with 15 seconds left to cut the lead to 14-10 at the break.

It was all North Newton in the second half as the Spartans outscored North White, 24-3, the rest of the way.

“We work with the kids on their conditioning,” Rouch said. “We outlasted (North White). They were tired and we weren’t.”

Rowland added scoring runs of 1 and 12 yards while Zander 94-yard score late in the game rounded out the scoring for the Spartans.

“He runs hard,” Rouch said. “He’s perfect for this offense because we’re going to run it in there and our line is getting better at what we’re supposed to do.”

“We had chances in the second half but we tended to shoot ourselves in the foot with a couple of fumbles and a penalty,” Kirk Quasebarth said. “I felt we gave ourselves a chance to win. We were still in the game. (North Newton is) big and strong and we had no answer for them.”

While the Spartans will entertain Tri-County – it’s also Homecoming – for the outright MWC title on Oct. 15, North White will look to beat West Central and hope for a North Newton loss so it can grab a share of the championship.