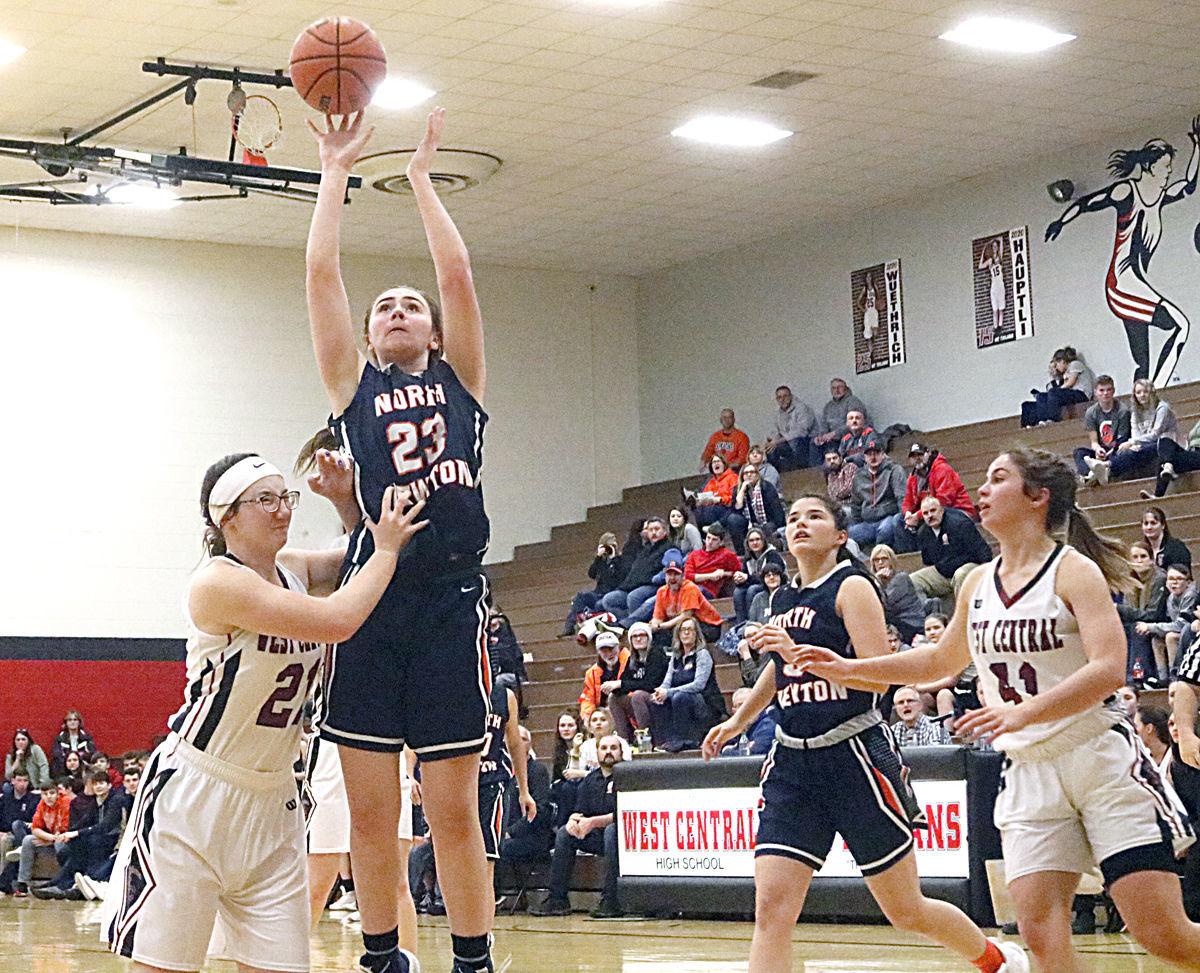 North Newton junior Harmoney Burke (23) gets fouled as she attempts a jump shot in the Lady Spartans’ win over West Central.

North Newton junior Mackendzie Dresbaugh is fouled as she drives to the basket in the win over West Central Jan. 10.

North Newton junior Harmoney Burke (23) gets fouled as she attempts a jump shot in the Lady Spartans’ win over West Central.

North Newton junior Mackendzie Dresbaugh is fouled as she drives to the basket in the win over West Central Jan. 10.

FRANCESVILLE — Behind a huge game from junior Harmoney Burke, the North Newton Lady Spartans outscored West Central in every quarter en route to a 57-39 win Jan. 10.

The win was North Newton’s sixth in a row as the team improved to 7-7 overall and 3-0 in the Midwest Conference just behind North White at 4-0 for the top spot.

Burke scored 18 points for North Newton, which included 14 in the second quarter.

“Harmoney struggled the night before and she was pretty focused before this game and I had a good feeling she was going to come out here and tear it up,” said North Newton heads coach Jenny Spillers. “It was a great game for her. She controlled the post, she was all over the boards and played the passing lanes on defense.”

Coming into the game North Newton wanted to slow down the conference’s leading scorer in junior Tori Culp. The Lady Spartans held her to just two points as several girls played her tough on defense including Mackendzie Dresbaugh, Grace Hollopeter, and Gracie Stevens.

While Culp was limited offensively for West Central, fellow junior Emily Pilarski had a big night as she got the hot hand early.

Pilarski nailed two 3-pointers in the first quarter and scored eight points for the Lady Trojans.

North Newton had five different players score in the opening quarter with Harley Schleman coming off the bench to score four points, and Cayci Ehlinger made a key 3-pointer. At the end of the first quarter, North Newton led 15-11.

Burke owned the paint in the second quarter as she scored 14 of her team’s 19 points as North Newton’s lead increased to 19-13 at the break. Heidi Schleman added a pair of baskets for the Lady Spartans, while Pilarski drained two more three-pointers to keep West Central close.

After being in foul trouble for most of the first half, Dresbaugh came out in the second quarter and sparked North Newton with a pair of shots from behind the arc.

The North Newton defense held West Central to just 1 of 7 shooting in the quarter, but the Lady Trojans did connect on four free throws to stay within striking distance, down 44-30 heading into the fourth quarter.

The Schleman twins, Heidi and Harley, each scored four points in the fourth quarter as North Newton cruised to the 18-point win.

Heidi Schleman finished with 10 points, while Dresbaugh and Harley Schleman each added eight, and Jamie Will had six.

“Grace Hollopeter didn’t score a lot tonight, but she has had three strong games for us in a row at the point position,” added Spillers. “Her at point and Mackendzie at the two spot helps us be more balanced. My senior Jamie (Will) did well too, she’s not scoring as much but she is playing really smart on offense and defense, and she has become a better passer. The Schleman girls were big tonight and both of them are key for us as we move forward.”