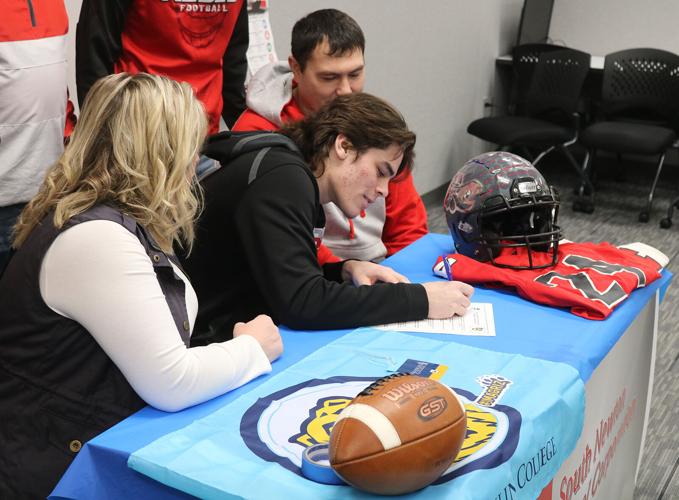 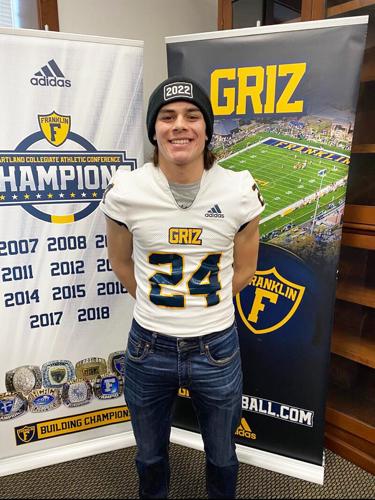 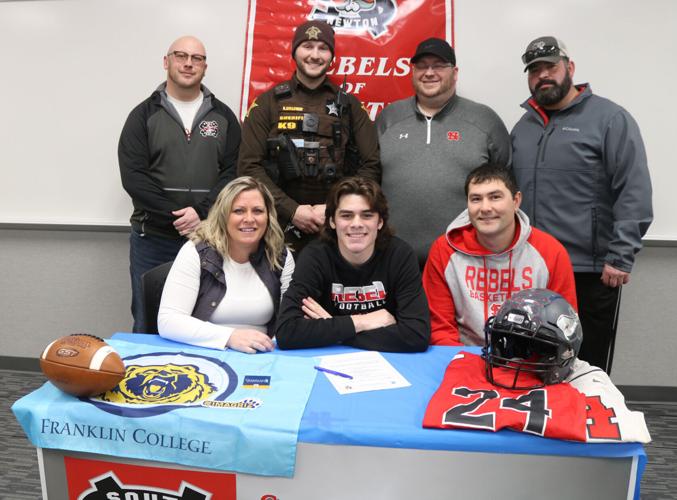 South Newton’s Kayden Cruz was joined at his signing day on Feb. 19 by his parents and coaches.

South Newton’s Kayden Cruz was joined at his signing day on Feb. 19 by his parents and coaches.

KENTLAND — Ralph Waldo Emerson once said, “Do not go where the path may lead; go instead where there is no path and leave a trail.”

That was the thinking behind South Newton senior Kayden Cruz’s decision to forgo opportunities at Trine University and Wabash College for a chance to play football at Division III Franklin College.

Cruz made his decision official during a signing day at the high school on Saturday, Feb. 19.

Cruz’s uncle, Skyler Sanders, who was an outstanding prep football player at South Newton as well, spent four seasons as a member of the Trine University football team. And though Cruz considered pulling on a Thunder jersey, he eventually felt he would go his own path at the next level.

“I just felt it was the best fit for me,” Cruz said of choosing Franklin. “I wanted to do something different. We have a whole bunch of South Newton kids who come out of here go there (Trine), so I just changed it up and will go south.

“It is really nice to have the opportunity to move to the next level and play. Not too many people get the opportunity, so I want to take advantage of it.”

The team’s top offensive player the past three seasons, Cruz played quarterback and defensive back for the Rebels, who snapped a 39-game losing streak last fall and finished a promising 5-5 on the season.

A threat in coach Brad Bevis’s run-pass option offense, Cruz could get the ball down field with his arm or chew up big chunks of yardage with his legs. He gained over 2,400 yards from scrimmage last season (1,272 passing yards, 1,150 rushing) and had a team-best 31 touchdowns, including 18 passing TDs.

The son of Dannielle Ellis and Emilio Cruz, Cruz said his senior season went as well as he hoped.

“I never really gave up hope,” he said of the Rebels’ outlook for 2021. “I know it sounds cheesy. But I love football and that’s why I kept playing it, win or lose.”

The Rebels remained competitive throughout the season, winning four of their last six games prior to a sectional loss at Culver Community.

“We took a tough loss to North Newton that first week, which sucked,” Cruz said. “I was thinking, ‘I really hope this year isn’t going to be like the last three.’ But we beat West Central (39-14 to snap 39-game skid) and competed with Traders Point, and I said, ‘This is looking good.’

“I had high expectations and they were fulfilled.”

A three-sport athlete at South Newton, Cruz will join a football program that hasn’t had a losing season in nearly 20 years. The Grizzlies won eight or more games over nine seasons from 2010-18 and reached the Division III playoffs in all but three of those seasons.

Grizzlies coach Alan Hensell and his staff plan to slot Cruz into either running back or wide receiver when Cruz arrives on campus this summer. One of Cruz’s future teammates is former Twin Lakes standout Kahari Jackson, who plays defensive back for the Grizzlies.

“I think they’re leaning towards wide receiver or wide out,” Cruz said.

The smallness of Franklin’s campus also appealed to Cruz, who will major in business management at the college.

“Trine has 5,000 students with a student/teacher ratio of 19 to 1,” he said. “Franklin has over 1,000 students and the ratio is 11 to 1. I’m one of those kids that needs to get extra help with things so that I can better understand certain subjects.”

Cruz also likes the ease of reaching the Franklin campus.

“It’s straight down I-65 and there’s one exit,” he said. “It’s easier to get to and my parents really like the campus and liked what they heard about the school.”

“My senior year team, we were really close,” he said. “That’s one thing I like to do is I’m a really sentimental person so I have a special bond with every single one of the players. It’s just more of a family thing to me. An added bonus is having an obsession with the game. That’s why I want to keep playing.”