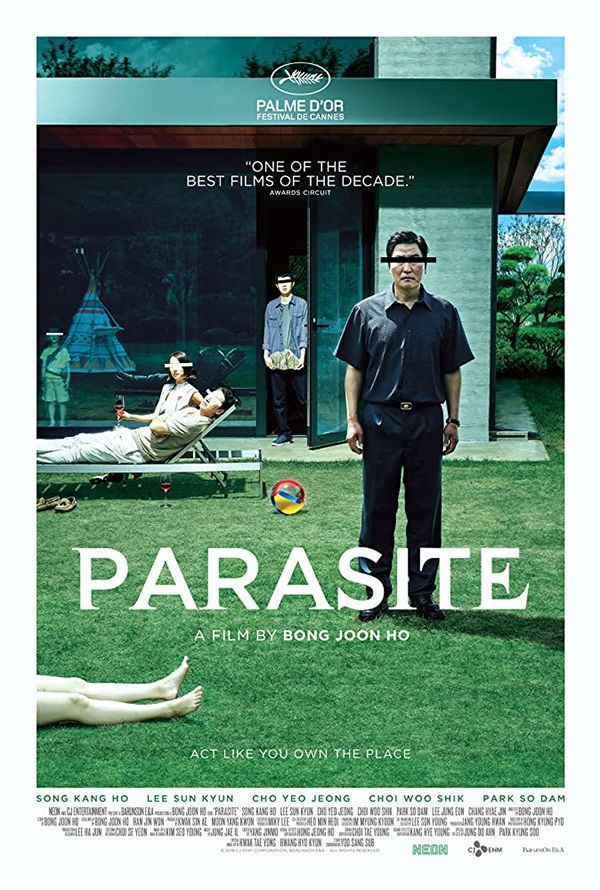 “Parasite” is available On Demand through online streaming and likely through your local cable provider. The film is rated R for language, some violence and sexual content. Its running time is 132 minutes.

This past February, the South Korean film “Parasite” did something that no other foreign-language, foreign-produced “international” film had ever done: Win the Oscar for Best Picture at the Academy Awards.

Whether this victory counts as an “upset” is a matter of debate (I personally thought “1917” would take it), but what isn’t debatable is that the Academy made an unusually outside-the-box choice, perhaps to offset criticisms that they played it too safe the year before when they gave Best Picture to the pleasing-but-not-challenging “Green Book.”

Other than the theory that it was strictly a strategic move, what made the Academy buck the system and why for this film?

The story follows the impoverished Kim family – father Ki-taek (Song Kang-ho), mother Chung-sook (Jang Hye-jin), daughter Ki-jung (Park So-dam), and son Ki-woo (Choi Woo-shik) as they worm their way into the lives of the wealthy Park family, the way a parasite does, I suppose.

A friend needs the smart-but-unaccredited Ki-woo to fill in as an English tutor for the Parks’ daughter Da-hye (Jung Ji-so). Ki-woo notices that dim-witted mother Yeon-gyo (Cho Yeo-jeong) thinks her bratty son Da-song (Jung Hyeon-jun) is an art genius and recommends Ki-jung to tutor him. Ki-jung creates a vacancy for Park family chauffer and recommends Ki-taek to fill the position.

There’s a bit of residual guilt over what they did to Moon-gwang, but there are plenty of lucrative jobs available to suddenly-unemployed older women, so she’ll be okay, right?

It turns out that Moon-gwang is in fact not okay, though her reason has little to do with losing her income. There’s a scene where she and the Kims go down into the Park family basement to retrieve something she left behind and the characters all walk through a dark patch. Somehow we know that once they come out of that dark patch, these characters and this movie will never be the same again.

The film has been mostly lighthearted up to this point, with the Kims playing loveable scam artists to the snobby marks Parks. But this movie didn’t win Best Picture on its merits as a scam-artist comedy, and it’s about to go to some much darker places.

Korean films are known for being merciless to their most likeable characters, and as much as this film prides itself on being original and different, it isn’t necessarily about to break with that tradition.

What stands out most about “Parasite” is its ability to switch tones very quickly. I’ve already touched on its beginnings as a lighthearted comedy, but later director Bong Joon Ho whips the viewer into scenes of devastating tragedy, disaster, even horror (and not the horror that’s inherent to tragedy and disaster, but traditional horror). Thus this is an incredibly unpredictable film, one that clearly took Academy voters on a wild ride.

I can’t say I’m overly thrilled with it winning Best Picture, despite its gut-punch finale and the admittedly-inspirational story of it overcoming the language barrier. Some of the twists and complications seem to exist for the sake of adding twists and complications, and most of the film’s much-lauded social commentary basically boils down to, “people who have suffered have more colorful personalities than people who haven’t.”

But by all means watch this unique, critically-acclaimed film and see if you find it more affecting than I did.